Again this year, some love it and some hate it.

was run on Friday morning.

While I love some aspects of this event,

at the same time some parts are hard to like. 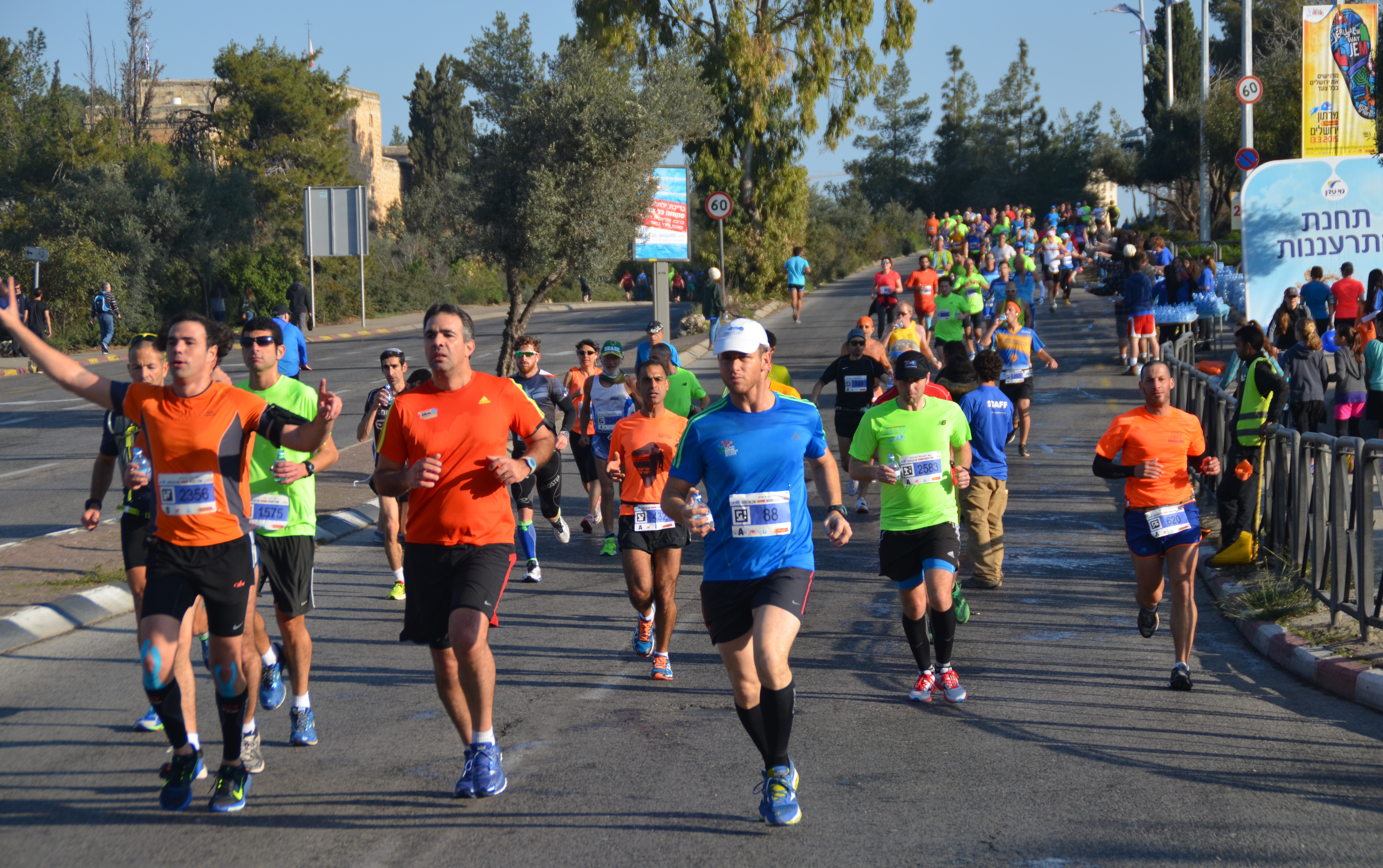 in many various races, many streets were closed to traffic.

This year I tried to take fewer photos,

Then I hated trying to get down to just a few to share.

You see how long it took to publish this post.

Now I hope you will enjoy a few favorites.

My favorite selfie was of these two men

whose finish time was not as important as their photo.

There were many good causes that raised money,

but Shalva was the first.

Shalva took part in the half-marathons before there was a full marathon.

Walking with children of ALEH were uniformed police. 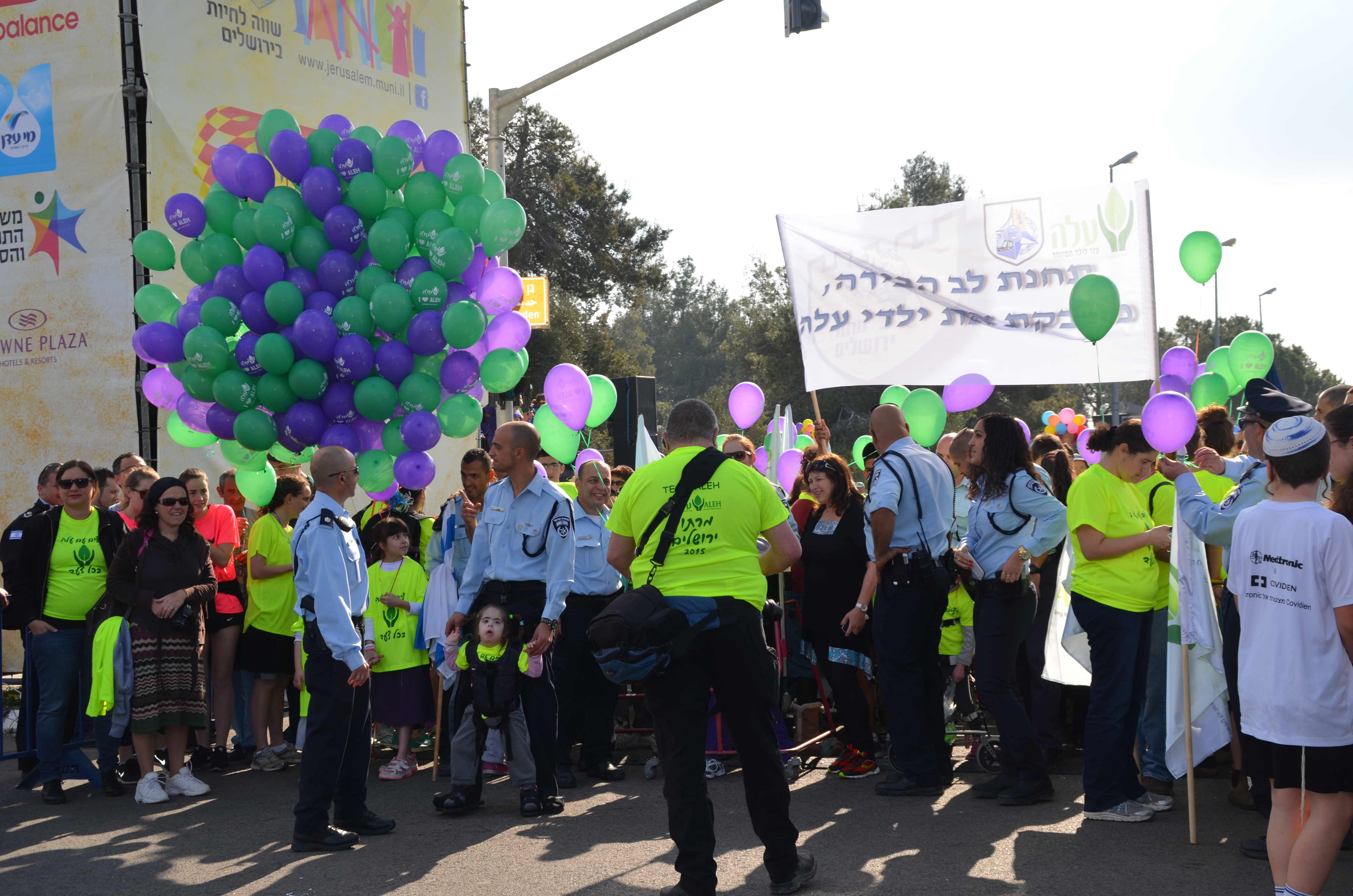 ALEH was first at the starting line for a special “race.”

Please take a minute to look and appreciate 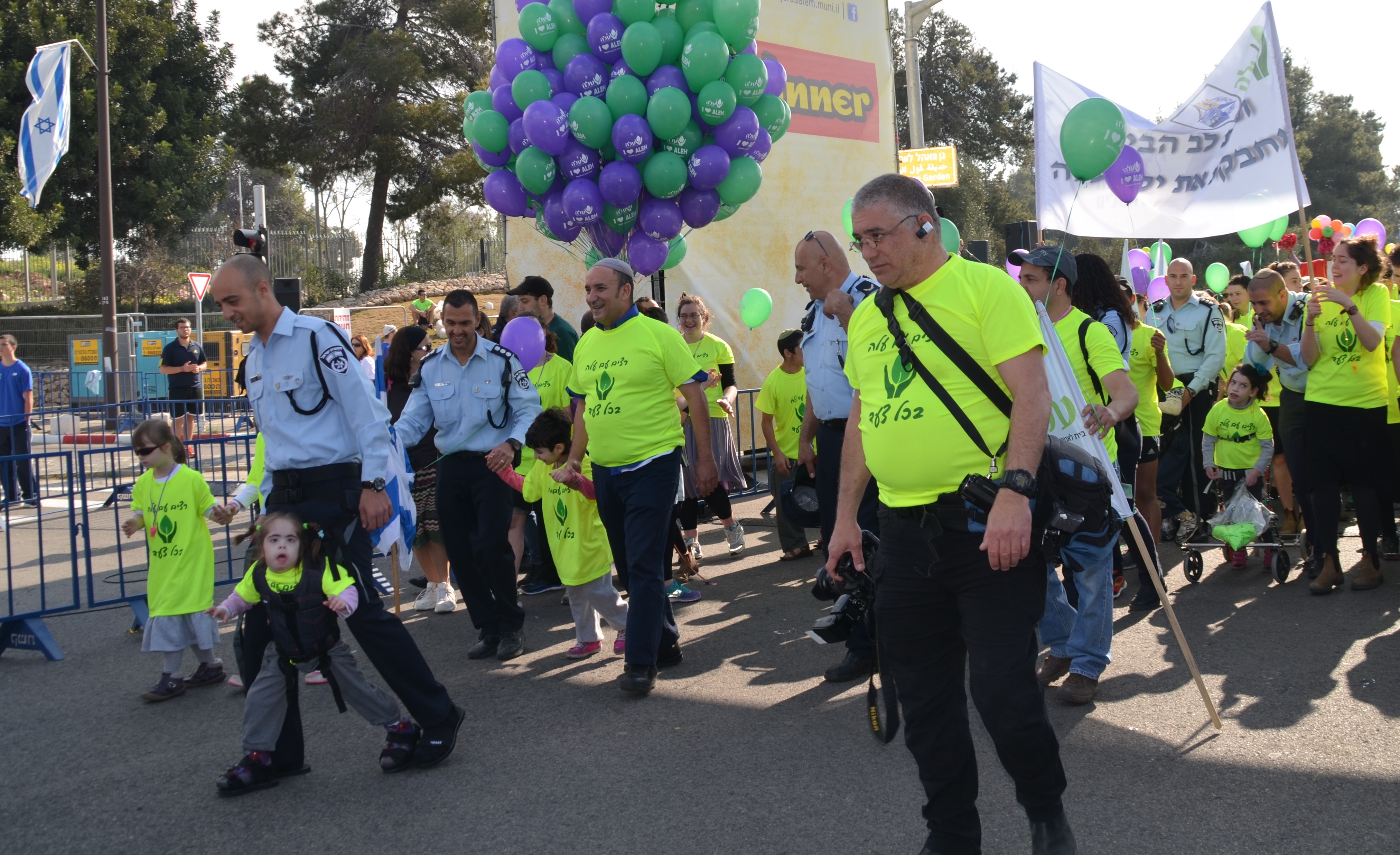 the police officer and child on the left.

I am so proud to know the woman whose

I hate that there were too many great causes

and charities, and I had to cut out many pictures.

Chai Lifeline had a large group with bunches of balloons,

lots of walkers and great spirit.

One Family’s red shirts could also be seen everywhere.

Karen Or was walking again this year.

These girls got my attention,

they seemed to be having a great time,

I am not sure which group they were with,

but photos of them are going viral.

The crowd in the park was so large 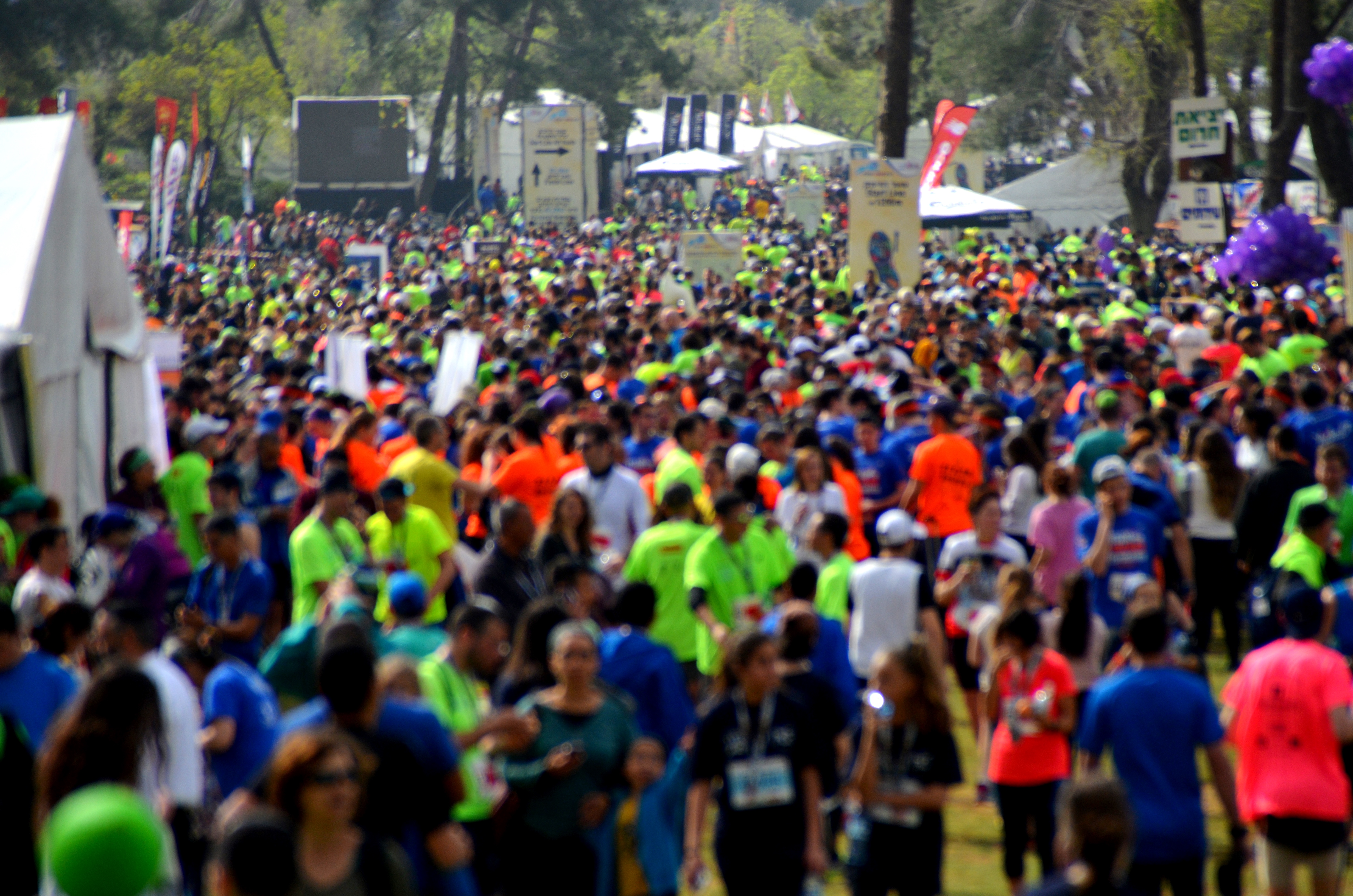 and colorful, but it was hard to get a good photograph.

So many came from around the world.

But my favorites visiting runners were

this man and his wife from Philadelphia, PA.

They came with 6 family members,

to raise funds for lone soldiers,

and to celebrate his 80th birthday this week.

and entered the Gan Sacher lined with water bottles.

In the park there were teams of supporters; 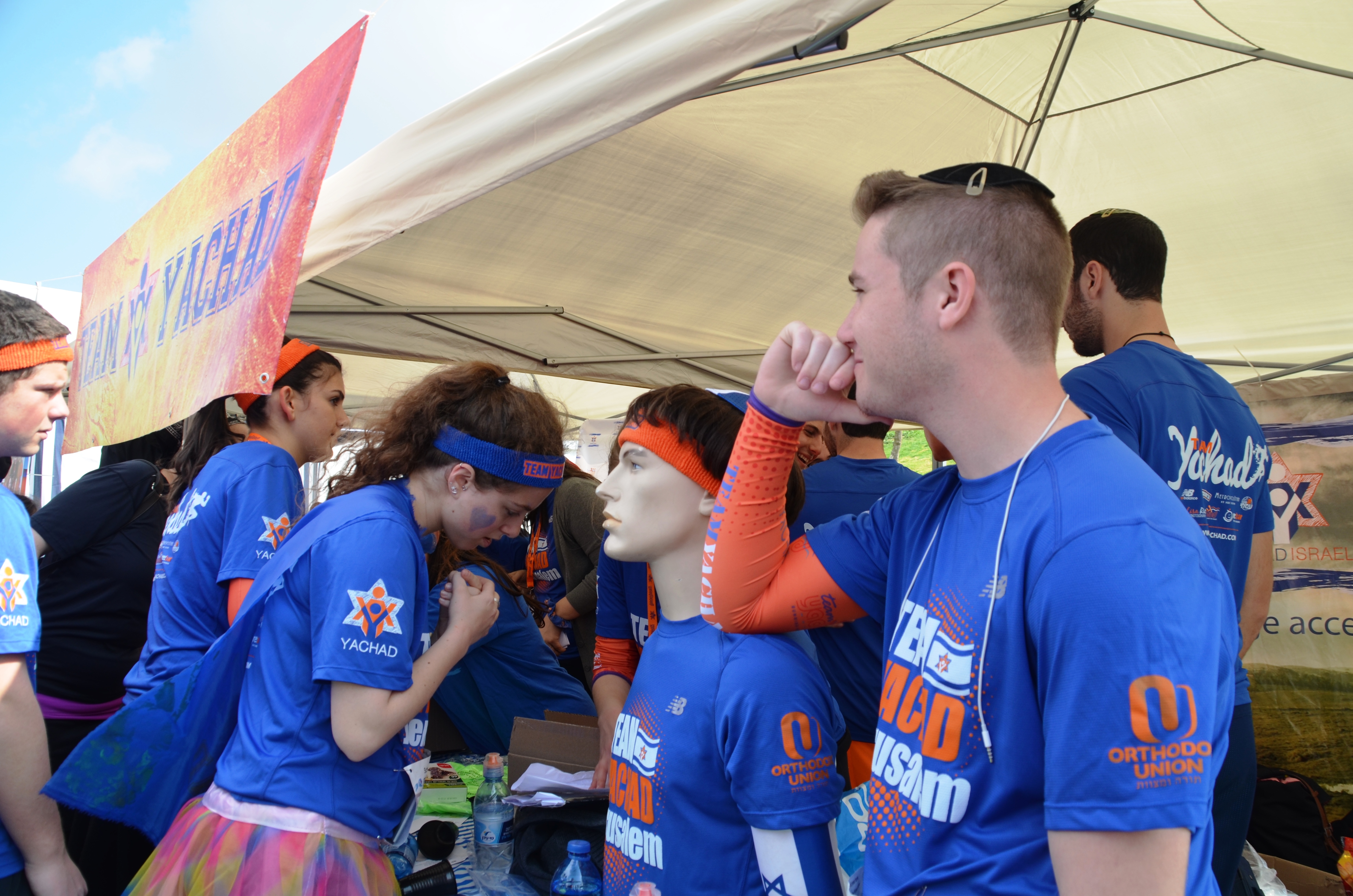 and Yachad were just a few of dozens.

While the marathon winners were popular with the news crews,

there was more going on. 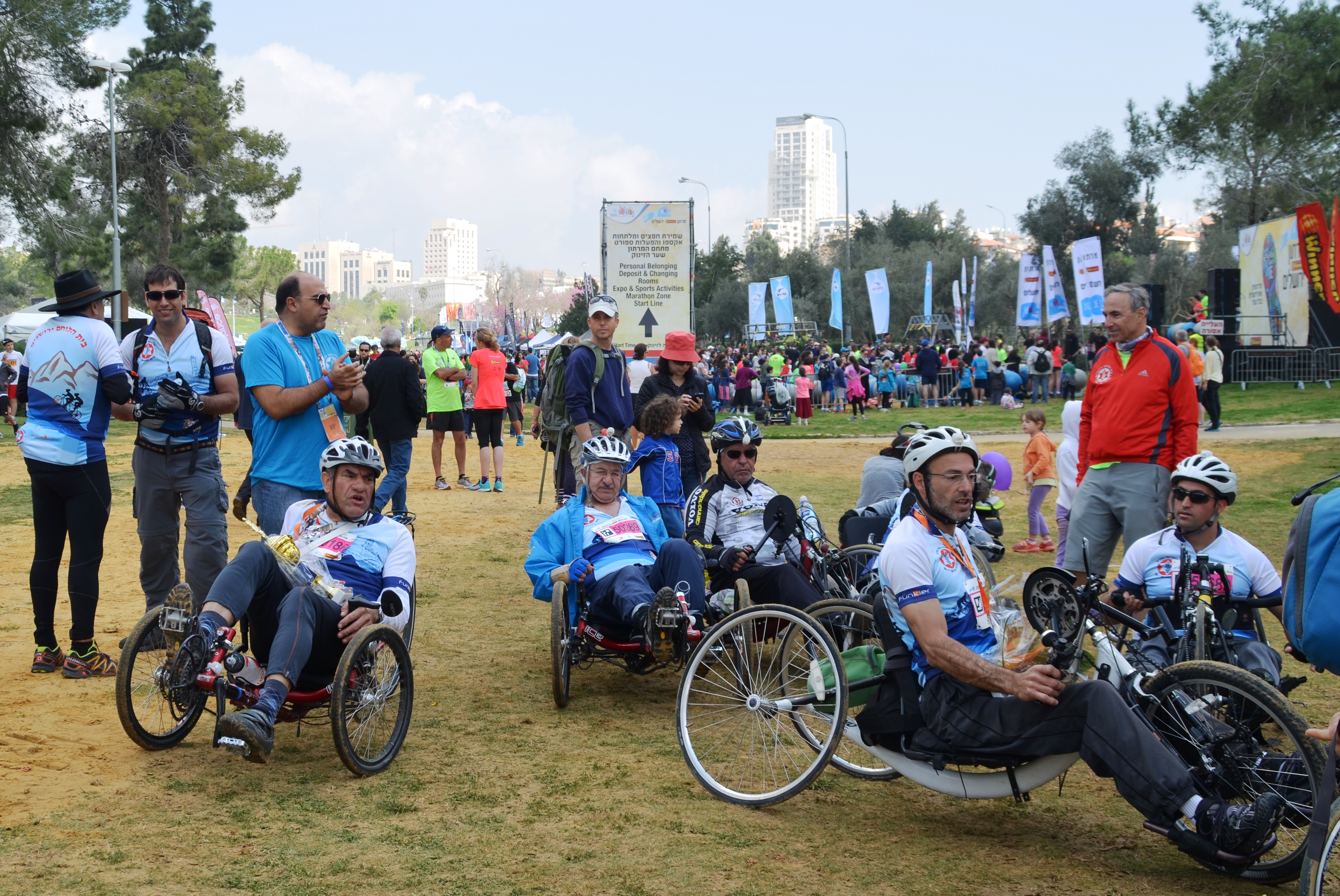 and exercises and music and of course – food.

The finish line for only the full marathon was at one end of the park,

here as the third and four place Israeli winners came in. 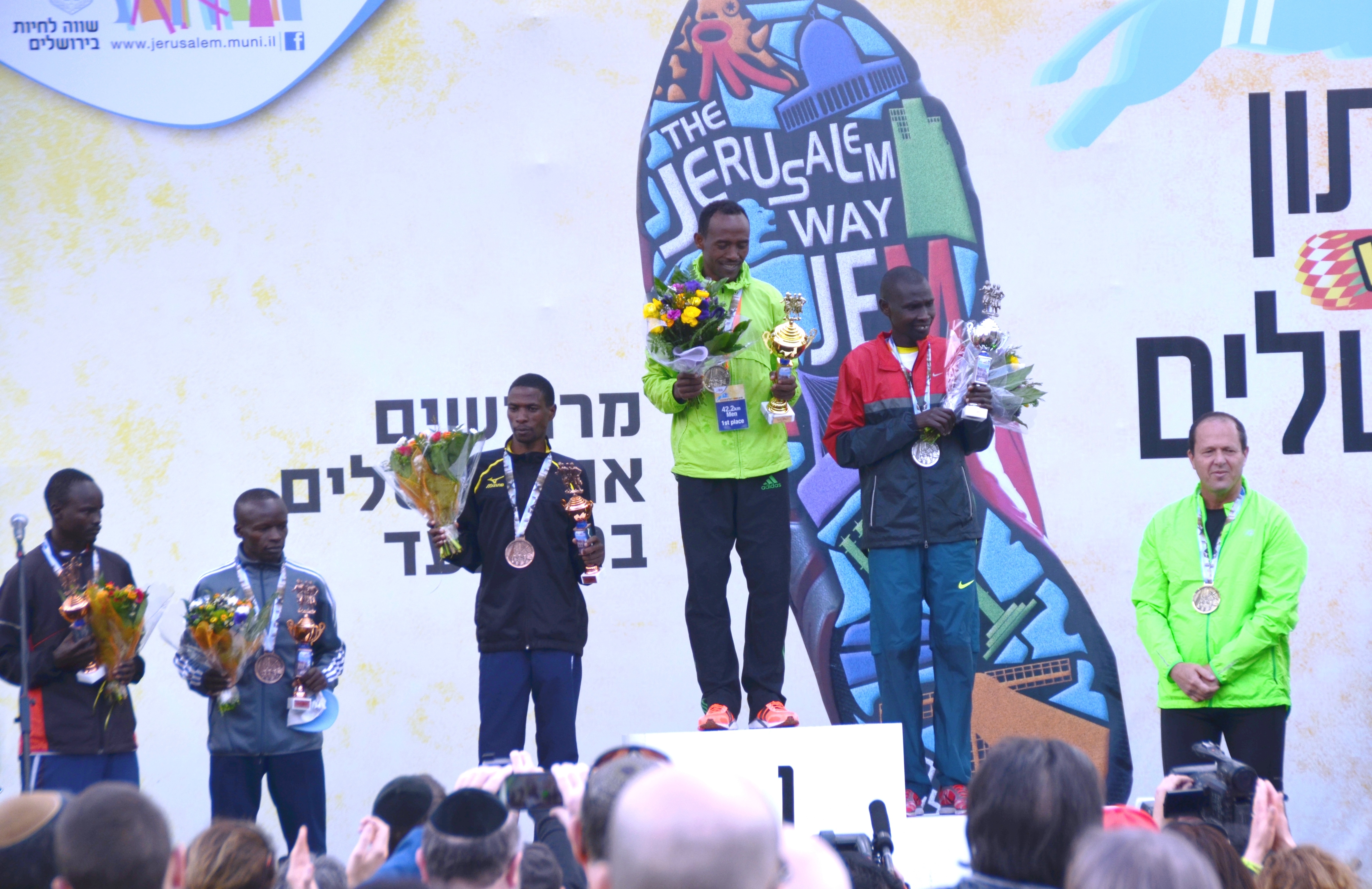 The men’s full marathon winners had their moment of glory

and got trophies from Mayor Nir Barkat.

The 10K and 5K runners were coming

up the hill to the finish line,

with the Knesset in view in the background

in crowds of thousands.

I did not find all of my family members,

for the first time,

yet this one man I had seen at the start,

there he was again as he came into the home stretch. 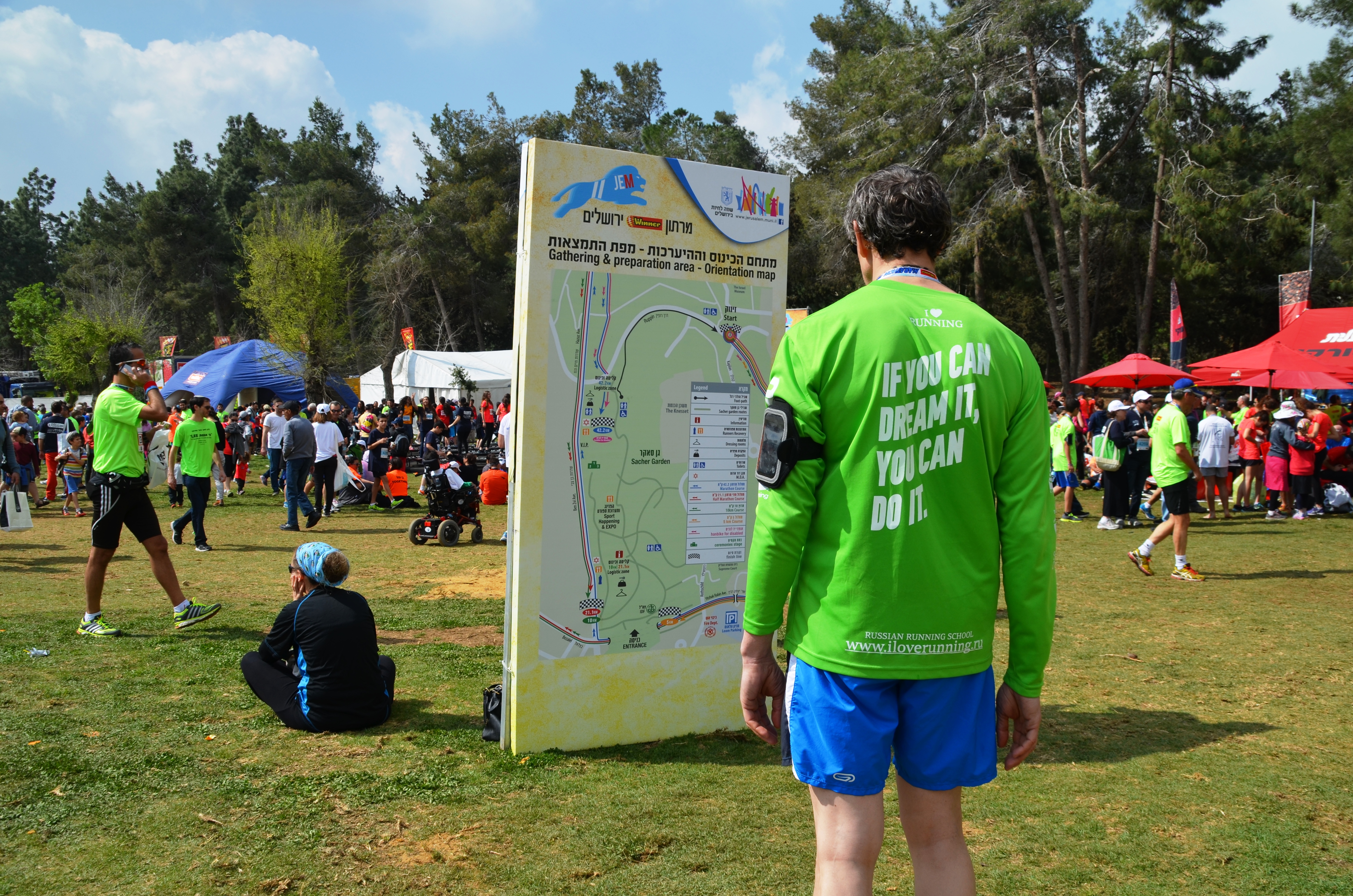 seemed like a perfect motto to start this day 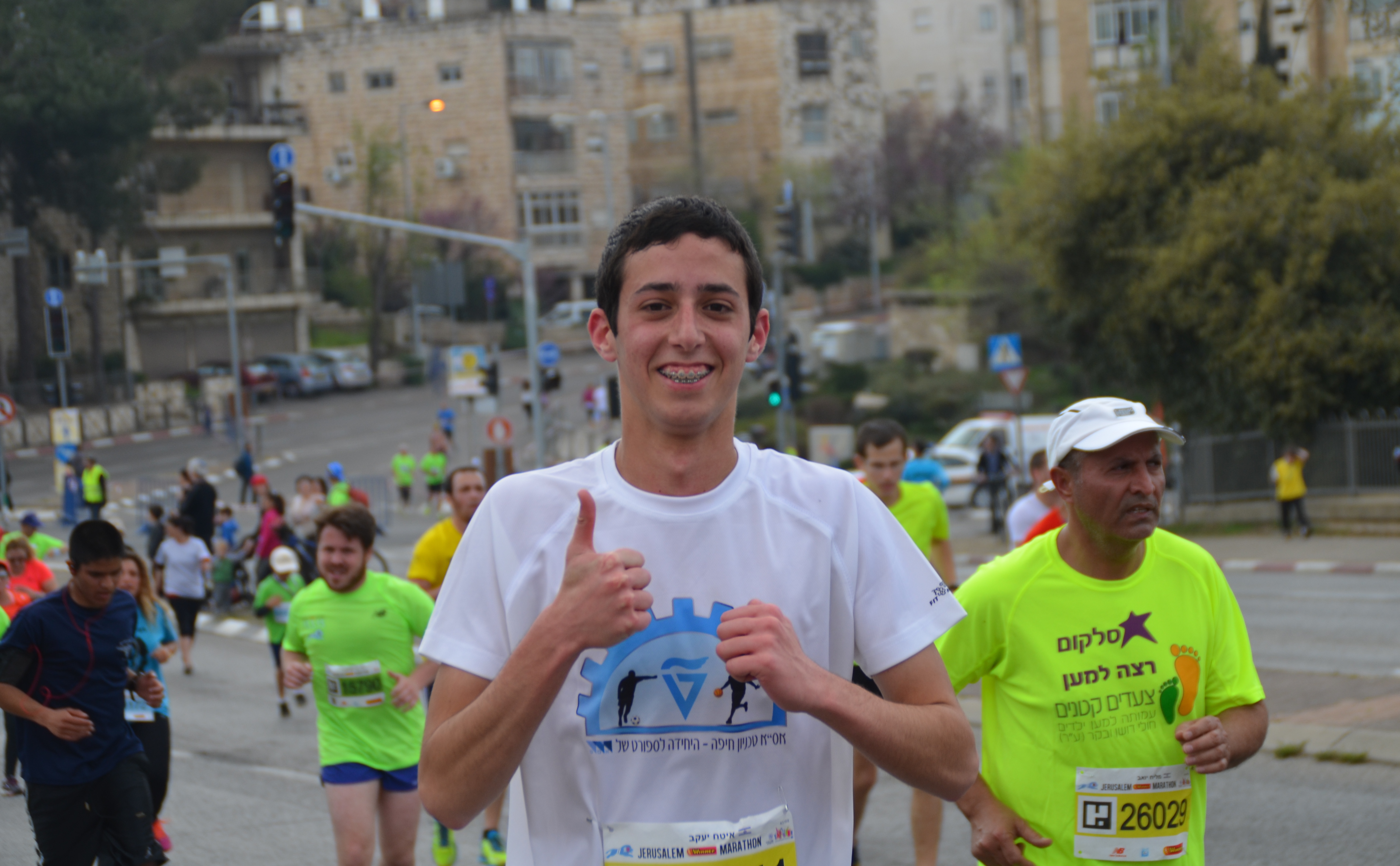 and this smile a good one to end with.

Photos had to be cut to keep this from becoming another marathon.

If you want to see more of Jerusalem Marathon 2015,

The sun was shining for the 4th International Jerusalem Marathon,

as 26,000 runners raced through the Jerusalem, Israel streets,

and the winner came in with a record-breaking time.

so everyone had to walk to get to check in and the starting line.

Once a year the graffiti is white-washed away and

a new banner is hung near the full marathon finish line. Besides the full and half marathons there are other popular races.

Thousands lined up at the starting line for the 10 kilometer run.

The young and not so young, most dressed in colorful shirts,

and their enthusiasm off the start was contagious.

Entertainers on stilts were dressed in flag-colored costumes,

near a special course for shorter races for the young and disabled. Along the routes were It was hard to get through the crowd in Gan Sacher, Sacher Park

With so many events running at once, it was hard to find family members,

but we did see the winner of the women’s full marathon. Over 50 countries were represented, and many religions,

but we only saw one runner from Brazil kiss the finish line. Separate awards for Israeli winners were presented for best times.

Loud music pumped through the park, which could be heard kilometers away.

The runners at the end of their races and arriving for medals,

were separated by fences from the crowds of spectators. But some proud grandmothers knew how to get around barriers for a special hug. And then there was the walk home.

The sun was hot.

Some runners were still approaching the finish line,

even as the streets were opened to traffic at one o’clock.

Thousands of shekels were raised for charity.

Everyone who participated was a winner.

Many have been inspired to try next year,

to enter or to train for a longer race.

I wonder how many faces you will recognize?

Remember last year?  If not see:

Did you Hear About Jerusalem Marathon 2013?