I waited for it to come,

and wow, did we ever get a lot of it!

Now I will try to explain how much snow there was

and how crazy these last few days have been for so many of us.

What a mess it was when the white stuff started coming down.

After a night of pouring rain,

it started snowing heavily around 7:00 am on Thursday.

By noon, 10 cm had accumulated, wreaking havoc with school and work schedules.

At midday, the sky cleared briefly, with a white covering on the ground,

and I could see the Israeli flag was still flying over the Knesset building.

It then continued snowing most of the day,

and by Friday, Jerusalem felt as if it was under siege.

In the words of the prophet Ezekiel, on “tenth of tenth month” of Tevet,

the Babylonians laid siege to Jerusalem.

The fast day took on new significance this year.

Jokes were going around, but for many, it was not so funny.

Each day we were buried under new and increasing piles of snow.

Five days after the storm began,

our small side street was finally plowed.

Sometimes the snow let up,

but if you look, those are the roofs of Nahlaot in background,

covered in white with no red tiles showing.

Cleaning snow off cars with squeegees seemed like a good idea,

even if you could not get anywhere.

We left a good snow shovel in Maryland when we sold our house,

who could imagine needing it in Israel?

Friday there was no heat for thousands because of power outages,

so it was warmer outside in the sunshine than inside.

Fallen branches blocking side walks were a common sight.

Major intersections were plowed, I thought these piles of dirty snow

Real snow plow or not, this was the only one

I actually saw moving the stuff covering the road.

This was to have been a weekend with special hotel deals for tourists.

I doubt many made it with the roads into Jerusalem

shut down for most of day.

There were more people out on these streets when they

were shut down for Obama’s speech last summer.

This woman with small children was out early,

but not many others ventured out into the winter wonderland.

the folks with big dogs were the first ones in the park.

Each day I had to clean the steps of new accumulations.

I moved the thermometer inside to check on the food.

Fortunately we have gas to cook with,

since our power was off for four days.

It was a very quiet Shabat.

So now the snow has stopped, and it is time to get out from under.

People began to get together to dig out their cars.

It was time to walk to the store and buy some milk, eggs and bread.

Then on the fifth day of the siege after the snow stopped,

black-ice covered the Jerusalem streets in the morning,

with people falling and cars skidding.

At least there are plans being made for some schools to open tomorrow,

or whatever you want to call it.

I wanted a lot of snow for viral photo material,

but forgot to ask for electric power and working computer.

So watch what you ask for, no matter how crazy it may be,

like half a meter of snow in Jerusalem, it just could happen. 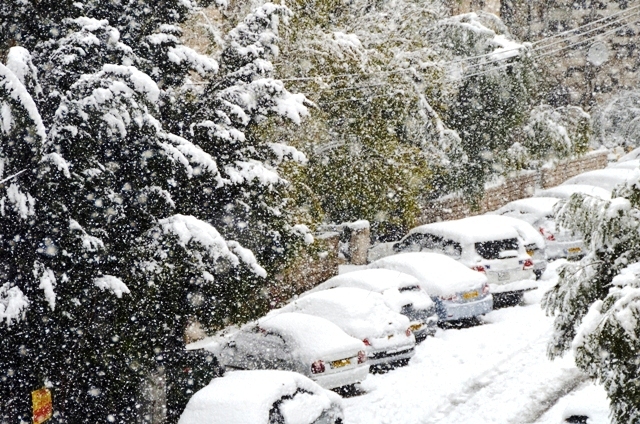 snowing hard enough that even friends from Norway and Canada commented. 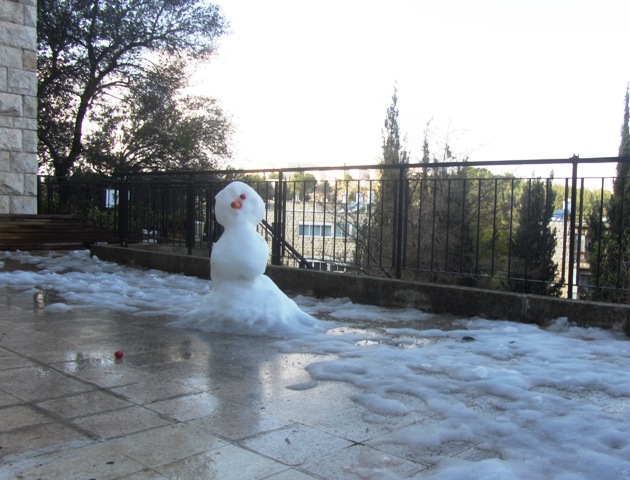 However, by Friday afternoon it had warmed enough that

our snowman was not looking so good and had lost one radish eye. 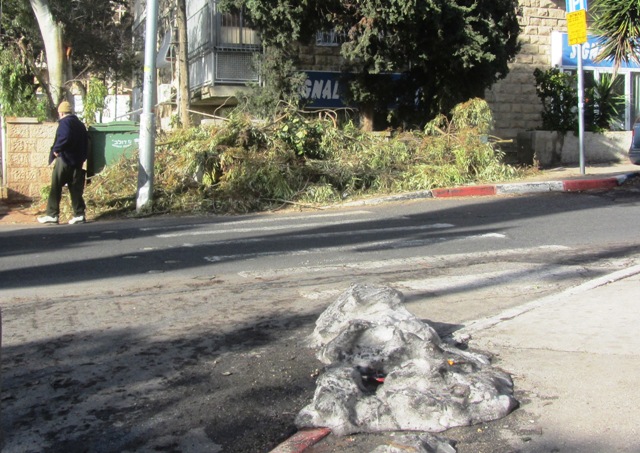 A few dirty old piles of snow and ice are still around, 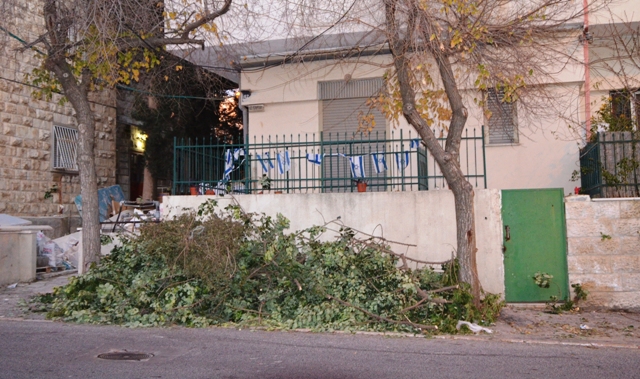 while piles of downed branches line many Jerusalem streets. 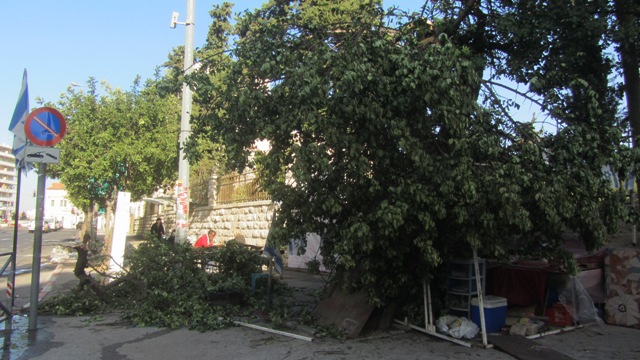 Large limbs of trees fell near the Prime Minister’s residence, 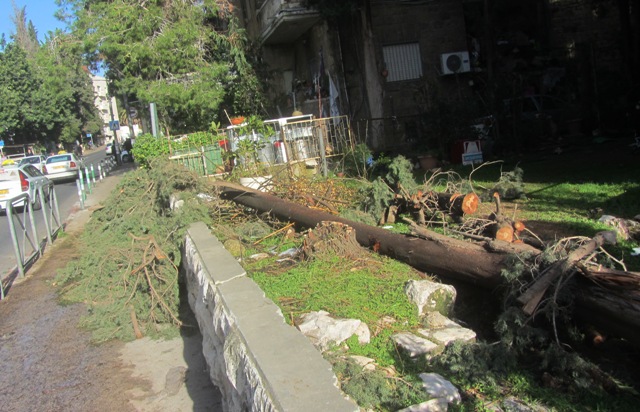 and many large trees like this one came down because of the weather. 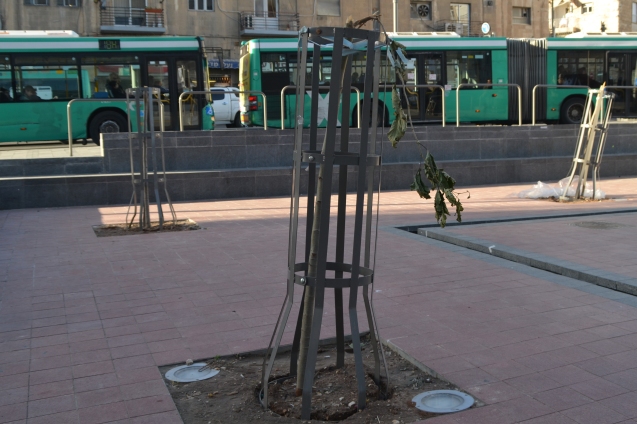 In the Davidka Square, all the newly planted trees were ruined;

only one branch was left dangling after the snow damage was cleaned up. 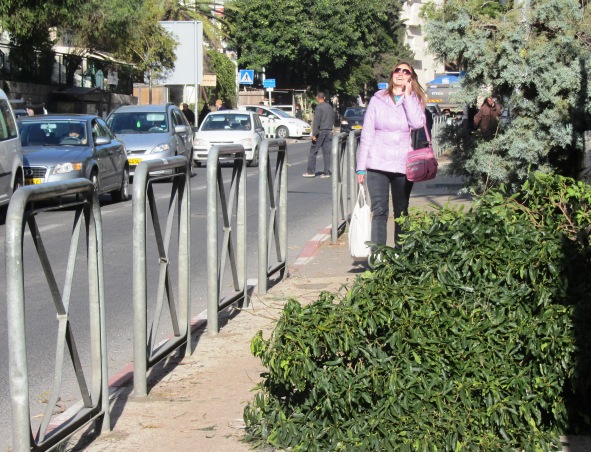 When the sun came out and temperatures warmed up, not everyone

seemed to be bothered by the branches that littered the sidewalks. 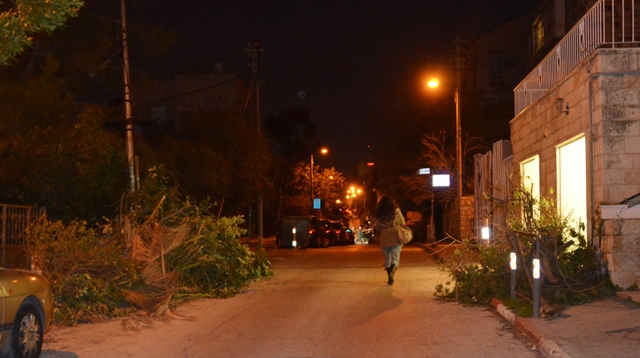 Post-snowstorm,  there is still plenty to clean up on the streets,

but if you are looking for ice, 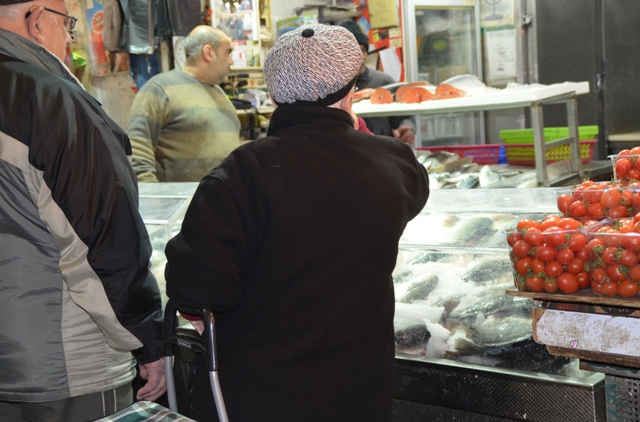 you’ll have to go once again to the Machane Yehuda market, the shuk,

where the fish shops are filled with fresh fish on ice. 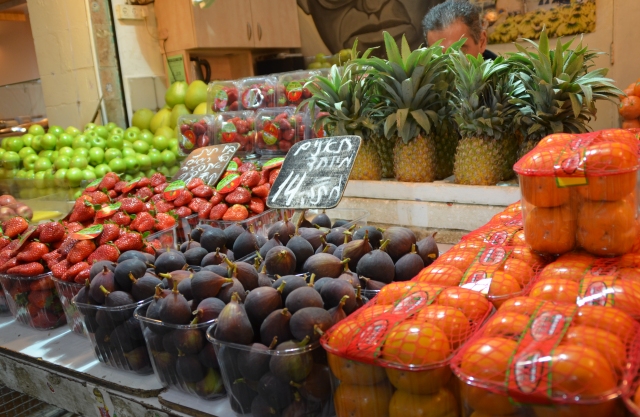 At the shuk, fresh figs were on sale yesterday ahead of Tu B’Shvat,

the New Year for trees, ten days from now: