The Jerusalem Knights Festival is back again in the Old City.

I have tried to return each year to see what is new and different.

These trumpets and trumpeters greeted visitors

as they approached the Walls of the Old City at the Jaffa Gate.

the plaza was filled with dancing-girls and spectators.

Many actors were positioned along the route,

but this gladiator with his cell phone has to be my favorite photo.

Some costumes were unusual,

were hard to see, as crowds blocked the view of the stage.

Young children on shoulders have a distinct advantage at this event.

However, this man with a lit torch on top of the walls was easy to see,

everyone who looked up could see the fire show.

entertained the thousands of young children who attended.

The route this year was both through and around the Armenian Quarter,

sparing the residents of the Christian and Jewish Quarters

with thousands of people outside their windows late into the night.

These photo-ops were not just for the kids.

were featured at more than one site.

could never have been predicted by Medieval seers.

There were live shows with plenty of tacky costumes,

There were also knights in not-so shining armor jousting,

and a Knights’ Pub with a bar with real wine.

Though there are those who oppose the idea,

were out on the Jerusalem, Israel, streets, enjoying the experience.

The last night of Knights, is Thursday night, November 21.

got the most views in one day for a RJS post.

But, 15 Real Photos of Arab Girls is still going strong

Too bad all my numbers are not that impressive.

So what is there to see in Jerusalem, Israel, now that the holidays

and municipal elections are over,

and the campaign signs are slowly coming down?

1. Street art can be found in parking lots

and lines so many streets,

but contemporary art in Jerusalem has a new home.

2. The Jerusalem Biennale, which runs from September 15-October 31,

had its opening in the galleries of the renovated Templar houses on Emek Refaim Street.

there was Manofim, multiple exhibitions of contemporary art in Jerusalem.

gave a talk at Mishkenot Sha’ananim as part of the annual Manofim events.

One woman was sketching during the program,

which was great to see at an art lecture.

Manofim took place in many neighborhoods around Jerusalem,

but I was surprised to find this sign left at the Jerusalem Bird Sanctuary.

Art, art and more art is not what you think of first in Jerusalem,

but I have written before about the galleries in the Jerusalem Theater.

People of all ages came to see their work.

Displays are constantly changing and open to public at no charge.

But there is more than art.

5. The Cinema City signs are up,

now everyone can see where the new theaters are located.

Einstein on Azza is coming on November 1.

Professors from the Hebrew University will give free lectures, along with live performances.

There is so much more, but the last for today.

8. The Jerusalem Knights Festival will be held

I saw the very first Knight night and wrote

who could imagine that the Crusades could be so much fun?

You may hear in the news about protests,

but how about these other events that are happening now?

There is a big problem though,

with so much to see and do,

how does one see a fraction of the things that are going on?

and not just looking for Arab girls….

A priority for City Hall has been to encourage

visitors to come at night to the streets of the Old City of Jerusalem, Israel.

And the current ‘Festival of Knights in the Old City’ has done the job. 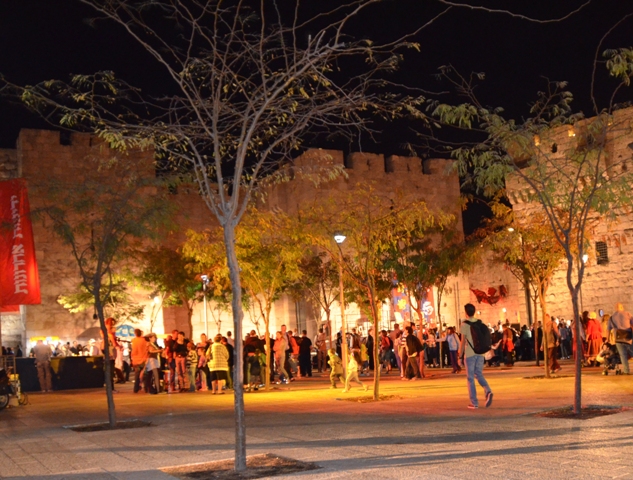 Jaffa Gate is the starting point for the ‘Knights and Dragons’ theme, 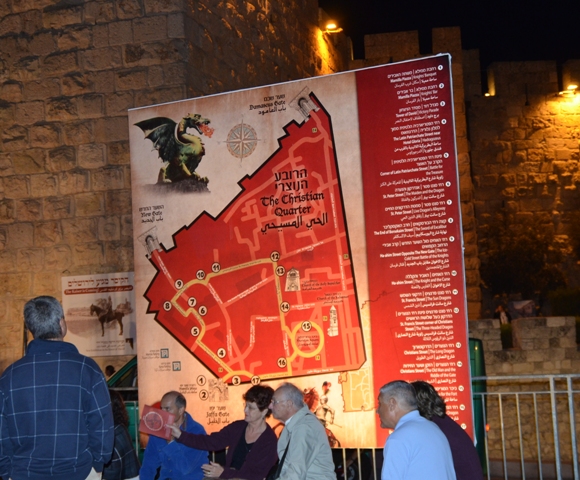 where a large map of the Christian Quarter route is displayed 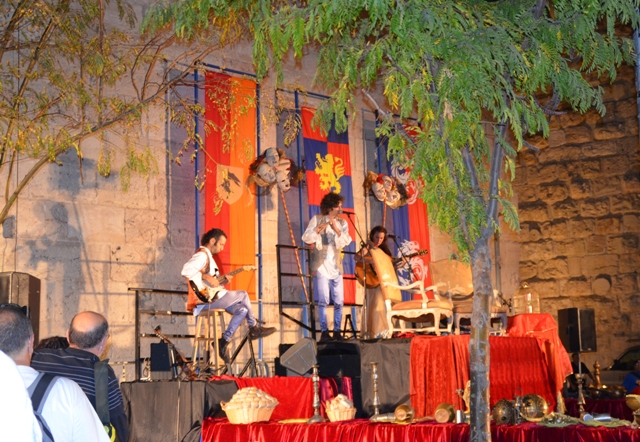 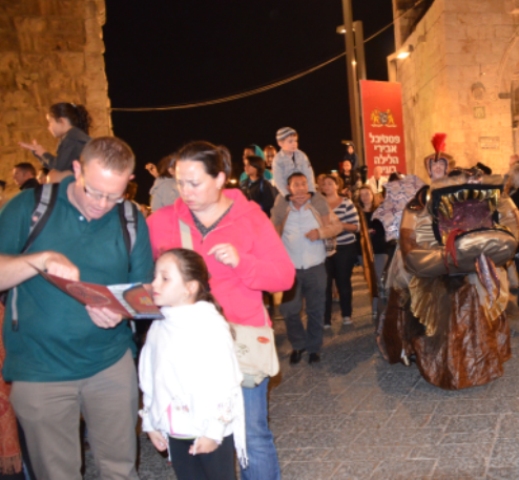 Smart families got a map with the 17 station locations, 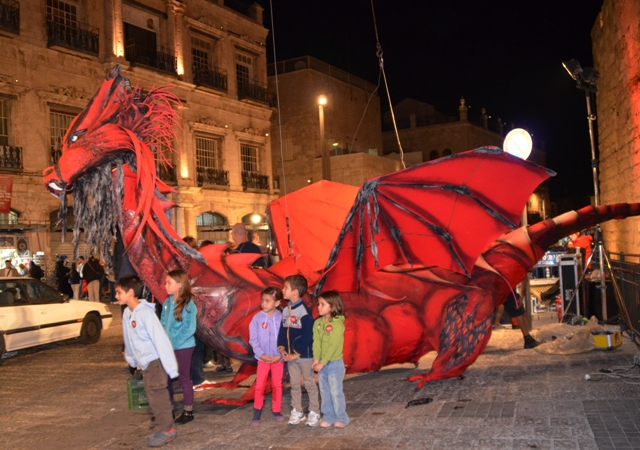 but does not include the many moving ‘photo ops’. 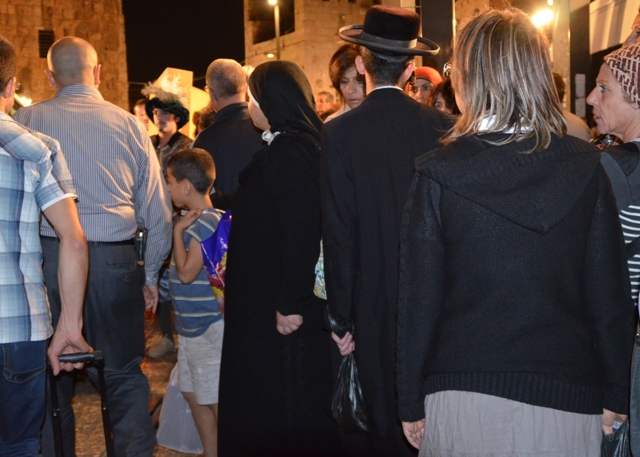 as good photographs are hard to get at these crowded events. 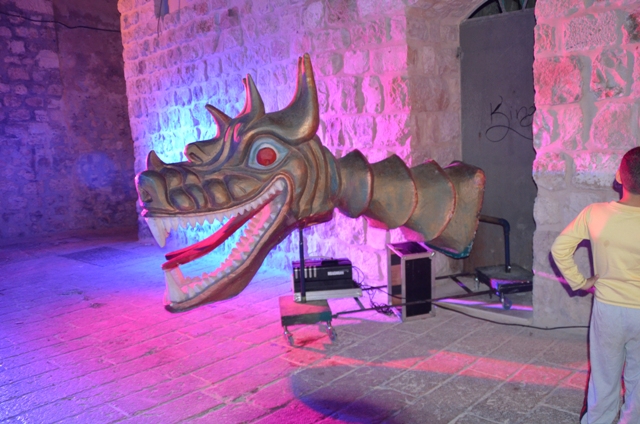 Near the beginning of the route was this colorful dragon head. 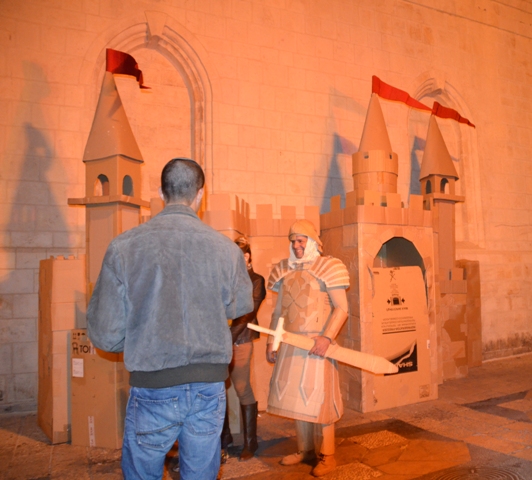 A cardboard castle and its defending knight were ready for photo action, 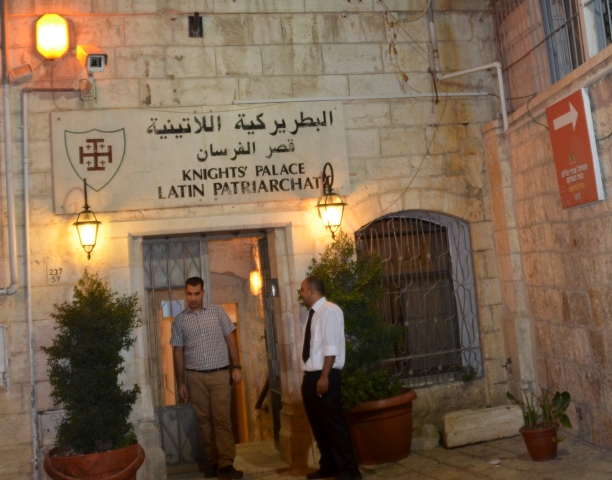 near the real Knights’ Palace. 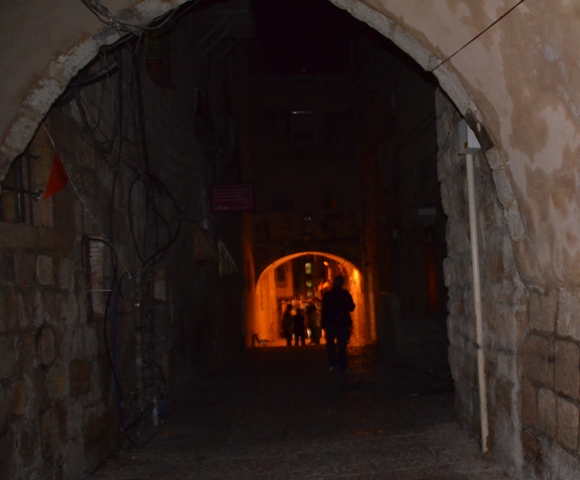 One lane was dark, 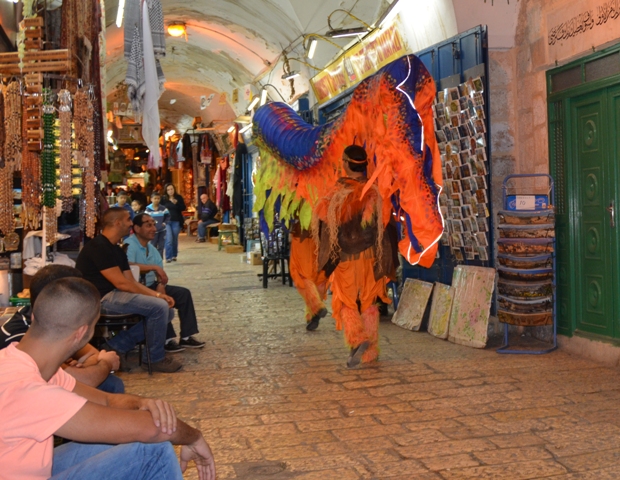 but most were well-lit and many costumes added color. 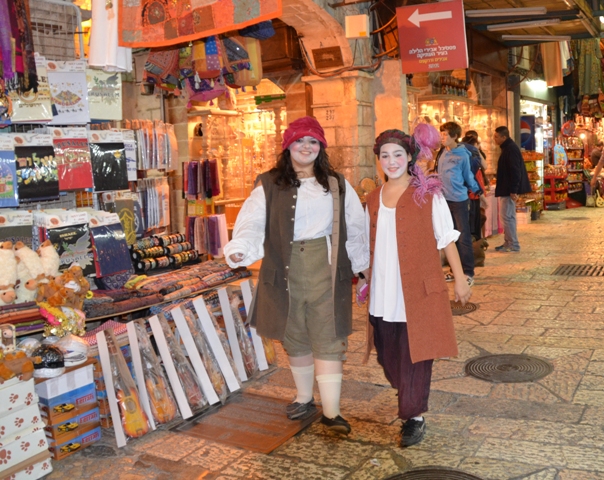 Actors were ready for the shows to begin. 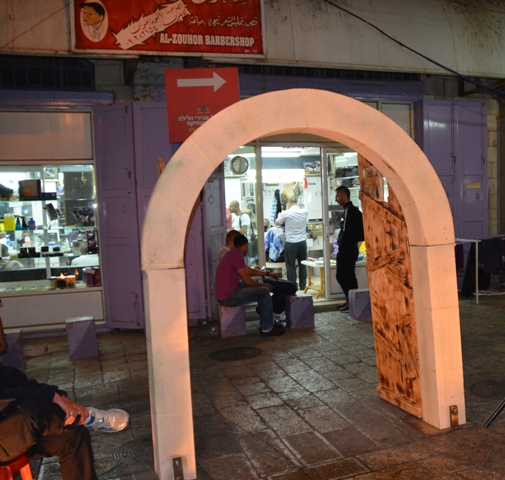 A barber shop was open under one of the red festival signs, 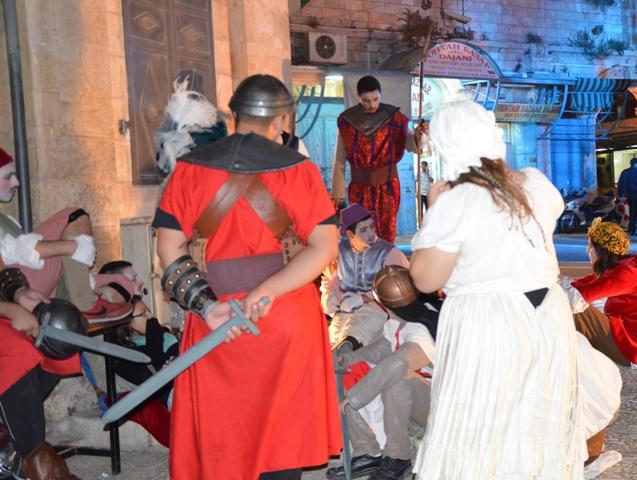 which pointed to the actors getting ready in Muristan Square.

As I said, smart people took a map. 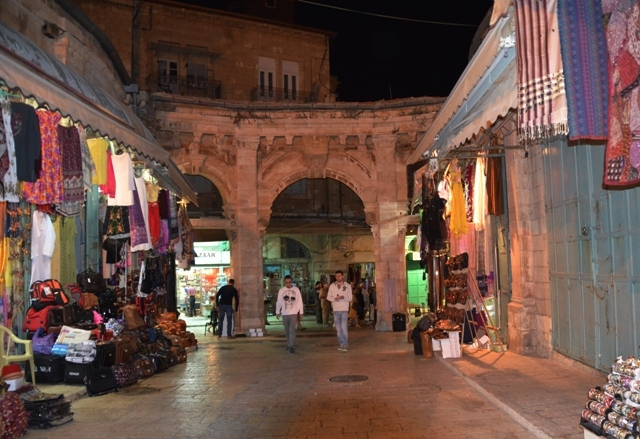 and headed in the wrong direction,

but this was the first night of Eid Al-Adha, the Muslim ‘Feast of Sacrifice’.

It was so crowded on the narrow paths

that I did not get a photo of the smelly animal being pushed in a cart.

His sad eyes seemed to know he was going to be the feast. 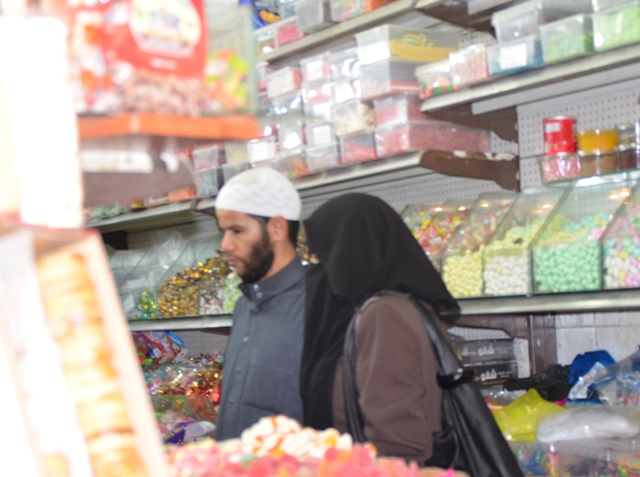 I got only this one picture of a candy store.

spotting a sign to the Via Dolorosa, I headed out of the Muslim Quarter. 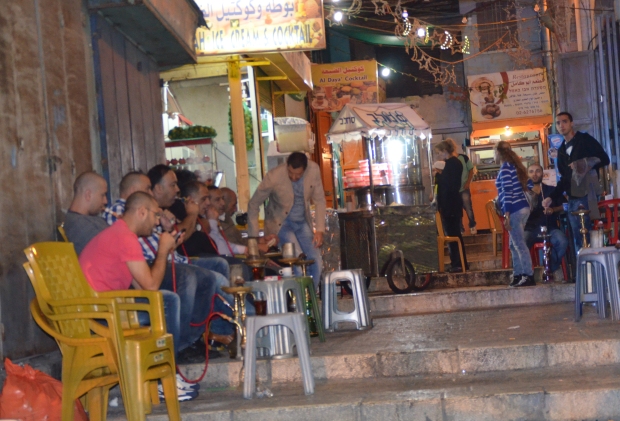 Retracing some of my route, I noticed these smokers were gone,

the lane was dark and quiet for festival visitors. 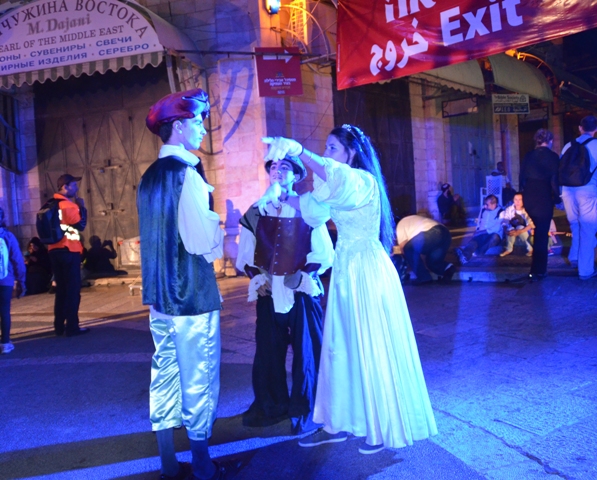 The actors were in Muristan Square and so was the “EXIT” sign. 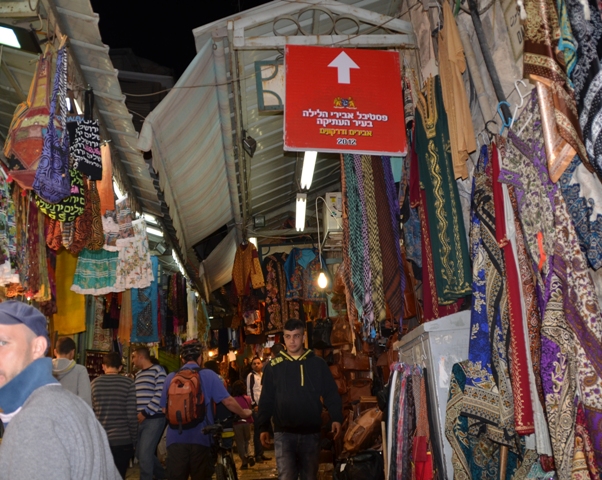 I do not know if the free Jerusalem Knights Festival

brought paying customers to shops, but many more were open

than for the first night of the Festival in October 2010. 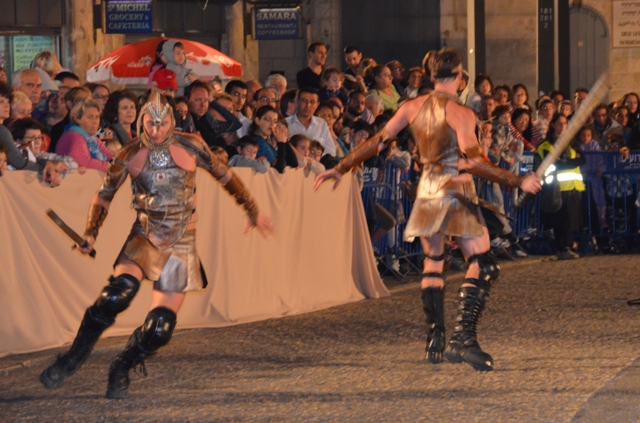 Back near Jaffa Gate, large crowds were watching gladiators fight 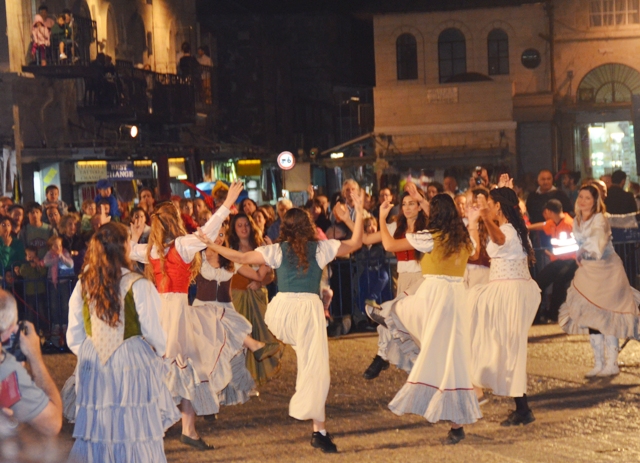 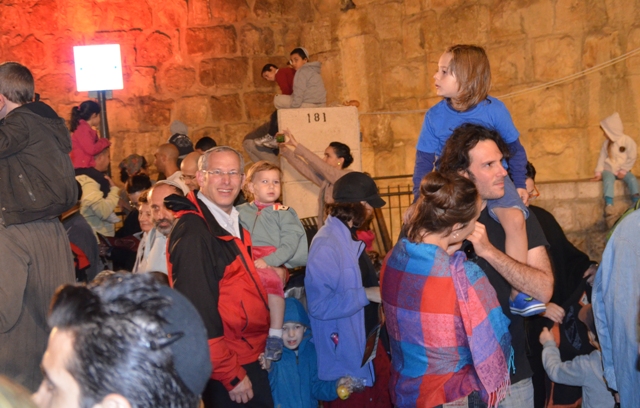 Hundreds of families, many with young children,

seemed to be enjoying themselves.

Many children were on their parents’ shoulders,

as it was very hard to see the performers.

I found a bench to stand on, 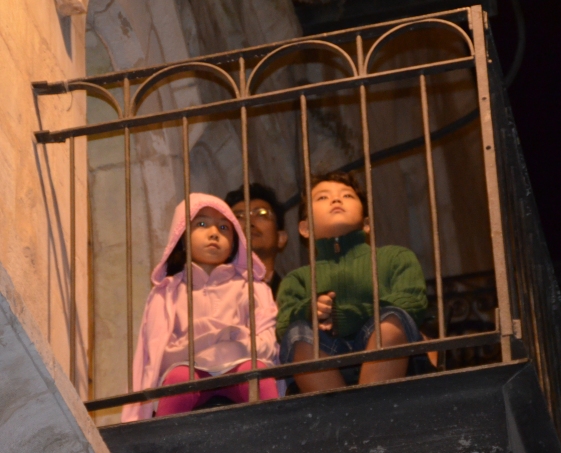 but I think this family had the best view. 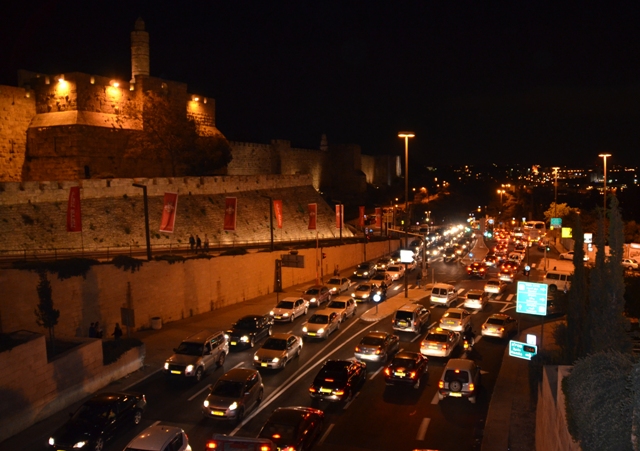 And as usual, when tens of thousands of people come,

the Jerusalem streets fill with traffic in all directions. 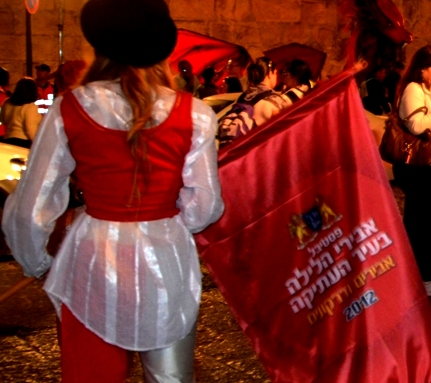 There are still two more Thursday nights in November to enjoy the festival.

If you cannot come and want to see more: