The Passover holiday has ended in Jerusalem, Israel, and around the world.

When we awoke on Sunday morning, the Knesset building was shrouded by the dense haze/sand in the air. Not a favorite sight to photograph.

Even with the indoor mask law lifted last night, I would advise wearing one outside today on the Jerusalem streets!

But before we move on to the Yoms, starting with Yom HaShoah on Wednesday night, there were special scenes of this past week I want to share.

The wall of Jerusalem’s Old City near Jaffa Gate was lit up at night with a colorful Pesach Sameach, Happy Passover greeting for the week.

As the holiday was to begin, windows had to be closed to keep out the smoke from the burning of chametz, as the last bread or pasta was taken out of the house and burned in countless fires around Jerusalem.

The Jerusalem streets were quieter than usual, with less construction going on over the holiday period.

The excited sounds of tourists returning were pleasant to hear instead.

The Kotel, Western Wall, was the main attraction for most visitors.

There was a tour group at the egalitarian section when I was there.

The damage caused to Al Aqsa Mosque by rioting thugs was evident in the broken windows you can see above. On another night of rioting, their firebombs caused an old olive tree on the Temple Mount to catch fire. Meanwhile, after Israeli security cleared the area, hundreds of thousands of Muslims were able to pray there peacefully for Ramadan.

Security was on higher alert and patrolling strategic locations.

This woman became a favorite when she bent down to explain to her young daughter not to be scared since the security was there to protect her.

The magnificent horses of the security patrols are always a favorite, even better when all they have to do is sit and watch the crowd.

Holiday music along the Jerusalem streets is also a favorite sight and sound.

You know the visitors are back when the port-a-johns are on the move.

Is a Greek flag on your mask a good sign of security for this Greek official out and about with his son?

Good to see these usually closed doors along the Armenian Road wide open.

Jerusalem streets require a protest sign, and this one is against the internet.

Some of the days of Passover were hot, others cold, but on one hot day the Iriyia, Jerusalem Municipality, gave out bottles of water that were much appreciated.

Multiple places in the old city sold bottled water, but along s main walking route to the Kotel, one family was giving away water to those who stopped and recited the appropriate blessing.

A hot day means if you don’t drink it’s easy to dehydrate. Also, it is a danger to slip on the stone Jerusalem streets that can be as slippery as ice. Emergency response teams were ready to provide aid and transport those in need to hospitals.

Food. So many restaurants were open for Passover observant visitors.

Jerusalem streets were cleaned up over the Passover holiday, with more than the usual runs to keep up with all the extra waste.

The art was back in Mamilla Mall. This piece was designed to encourage people to watch their speech and avoid Lashon Hara, talking badly of others.

There were tours and special programs for families at the museum and tourist sites as usual, but not many tourists found this Jerusalem art fair.

Tucked away behind the Waldorf-Astoria hotel, on the entrance street, only one lone cat was near the feeding station the day I went to check it out.

On Wednesday of Passover, in the evening there was a controversial Flag March. I went to check it out for myself and decided to share this short video to show the real Jerusalem streets.

As usual, thousands are peaceful, and only the few trouble makers make the news photos and headlines.

The Temple Mount is closed to Jews until after Ramadan, which ends with Eid al-Fitr on May 3 and 4, 2022. The Druze are celebrating Nabi Shu’eib in memory of the Prophet Jethro. And today is Orthodox Easter Sunday, with a major ceremony “Holy Fire” held yesterday in the Old City.

Until the dirt clears from the air, I am content to stay inside and pack up the Passover dishes once again.

As every year, we concluded the Pesach seder with “Next Year in Jerusalem.”

Hoping to see you next year in Jerusalem!

The tourists are arriving!

Finally, after two years of corona closings, the spring holiday season is starting to feel normal again. However, there are some people who, after a few days, realize they are not suffering from allergies but go into isolation after testing positive for corona. The virus is still a part of life on the Jerusalem streets as is the annual spring pollen count.

Oh, what a day in the Old City it should be! Sunday, April 17, 2022, Passover, Ramadan, Easter, and Orthodox Palm Sunday are to be celebrated.

In this busy time preparing for Passover, I decided to share some of what’s new with the old on the Jerusalem streets with you.

The Jewish cemetery on the Mount of Olives goes back thousands of years but was not accessible from 1948 to 1967 because of Jordanian occupation.

Har Hamenuchot opened in 1951 instead as the main Jerusalem Jewish cemetery. It was visible on the right side of the road as one drove up to Jerusalem on the old winding Route One. Today there are new modern highways to arrive in Jerusalem.

Rising above the expanded Route One, are those new “buildings” on the hilltop. New apartments under construction below near the highway, and burial sites rising high above cover more of the mountain top.

With land scarce all over Israel, other cemeteries have also built new above-ground burial structures.

This was a regular Sunday morning at Damascus Gate, before the start of Ramadan. Did you hear of trouble there at night as thousands of Muslims come out after breaking their daytime fasting?

On a regular Sunday morning at Kotel, this is the Western Wall egalitarian section in the distance. They started working on the section where the Second Temple stones were left at the bottom of the western wall of the Temple Mount.

This view of the work being done next to the women’s section shows why the sections were not connected and expanded in the past.

New is the excavation of the Kotel Plaza exploring what is above ground.

At the Givati parking lot nearby, the excavation has gone down exposing centuries of history just outside of the Old City walls.

Coming soon, there will be a new restaurant on top of the current visitor’s center at Ir David, the City of David.

Work has progressed under the Jerusalem streets, on the Pilgrim’s Path.

The route is being prepared for visitors to Jerusalem.

Remember the story from a visit in 2017?

Now one can go up the steps up from the Shiloah spring without wading through the water.

Along the new/old route taken by visitors to Jerusalem is a shop, a model of the shops that were available for the pilgrims who went up to the Temple Mount.

There is more old and new in Jerusalem for you to see than in the Old City beside the new tunnel tours.

France Square’s dedication was in last week’s Tips for Touring in Jerusalem.

A new dedication stone was placed near the previous location,

with the former mayors’ names in Hebrew and French and the 2008 date.

Not all vacant lots in Jerusalem are building sites; some are prepared for much-needed parking spaces.

There are so many more cars and trucks on the Jerusalem streets!

The new tunnel from Gush Etzion is open and the old one is being repaired.

The new Pesach, Passover festivals, and activities are beginning soon.

New signs are posted to welcome visitors to Jerusalem for the holidays.

The last old wrecked house in Yemin Moshe along my photo walk route is being renovated, with the new roof resembling the old Templer tiles.

Visitors will be surprised to see so much new with the old.

Also, they should be pleased that behind those old post boxes in the Yemin Moshe parking lot, is one of the new public toilets. An important new and welcomed addition to those spending time on the Jerusalem streets.

Many challenges this past week, but also many good events to celebrate.

Hope to see you soon!

What a busy two weeks have passed!

in a Sderot school yard, then it seems not too late

to post a few favorite photos of the presidential visit

to Jerusalem, Israel just before Passover. 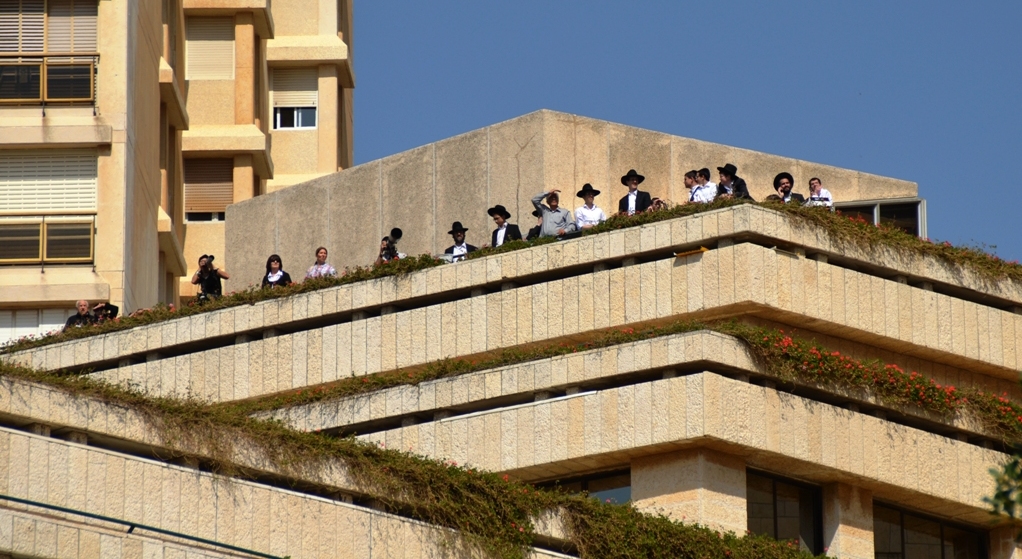 People waited on the roof tops to get a view 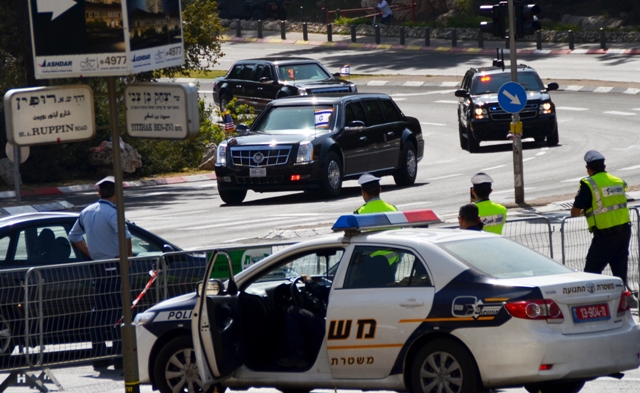 of the presidential motorcade as it arrived in the city. 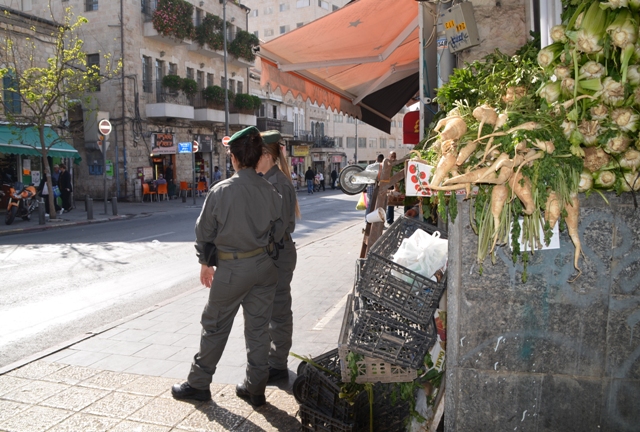 Agippas Street, like so many other places, had lots of extra security, 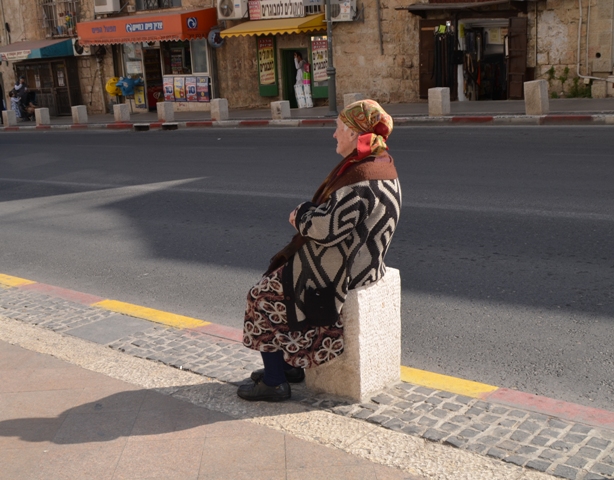 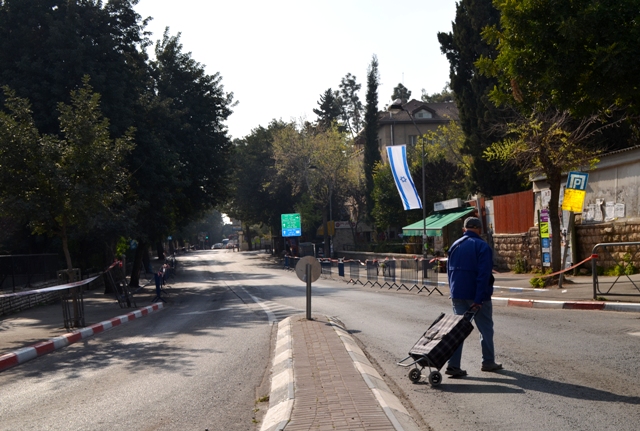 No danger of getting hit crossing usually busy Ramban Street,

NO cars were allowed.

If you could walk there, then

it was a perfect time to go to the shuk, the Machane Yehuda Market, 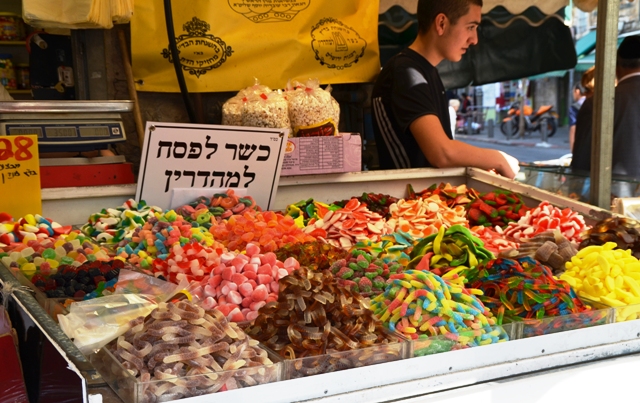 which as always is a colorful place to shop.

Passover is such a busy time as there is so much happening,

especially this year with the Barak Obama visit. 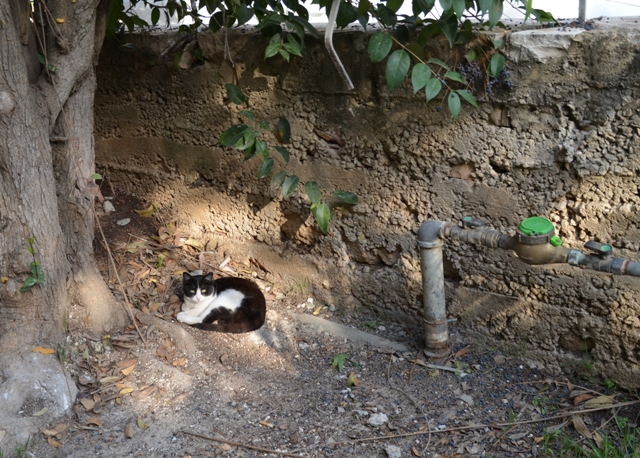 this cat really had the best idea, to crawl up in corner and hide.

One stand out moment, 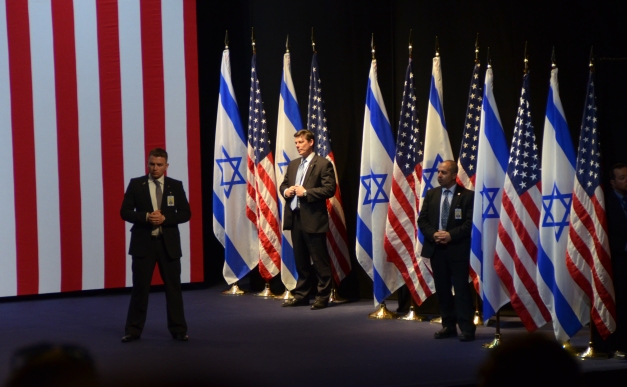 was after a heckling Arab student from Haifa University shouted out,

secret service agents on both sides of the stage emerged from the flags. 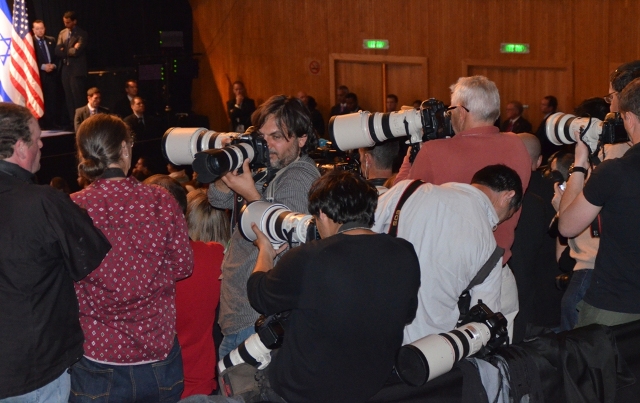 This was a serious public event with serious camera lenses, 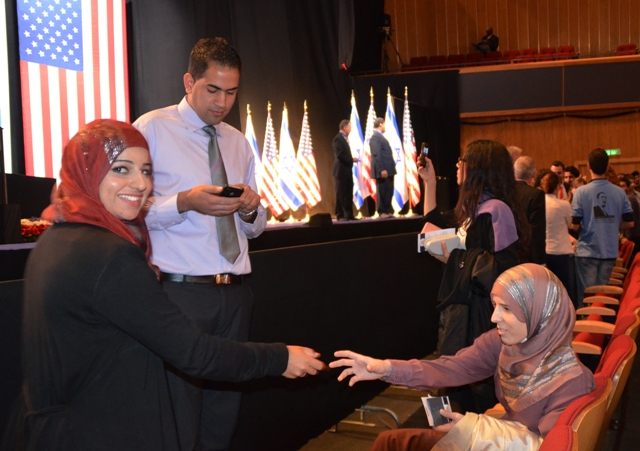 and many smiling faces,

but more about Barak Obama’s speech another time.

Such an Only in Israel moment occurred 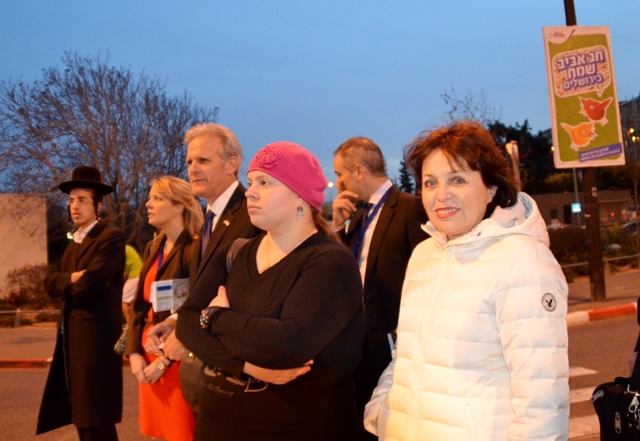 on his way to the State Dinner at Beit Hanasi, the President’s House.

While standing on the street corner waiting to cross, no one recognized him. 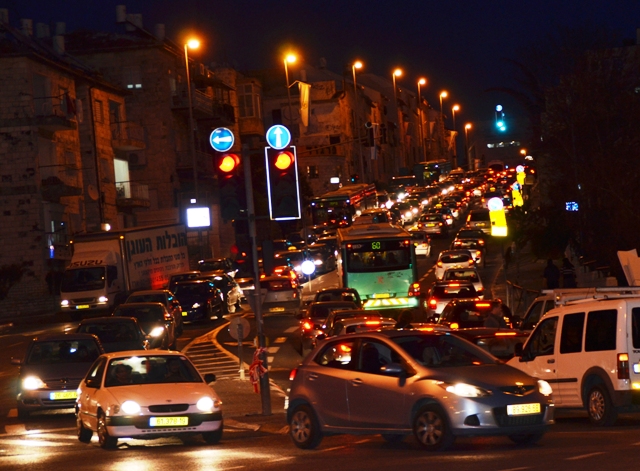 Oh, when they opened those streets that night was there traffic!

and the family Seder was the main event for millions of people.

Israelis love to go to nature spots when there is a holiday.

the week before Passover because of the Obama security, 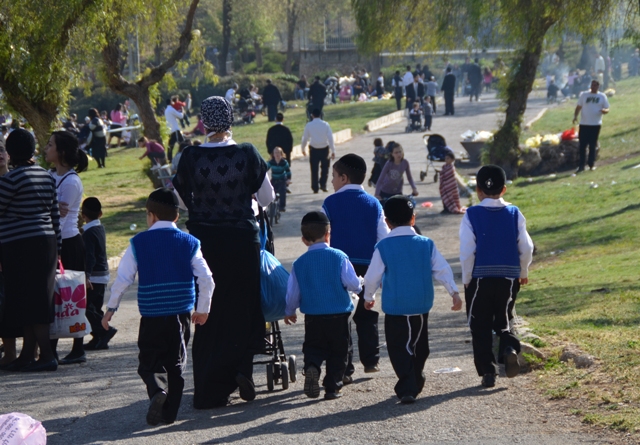 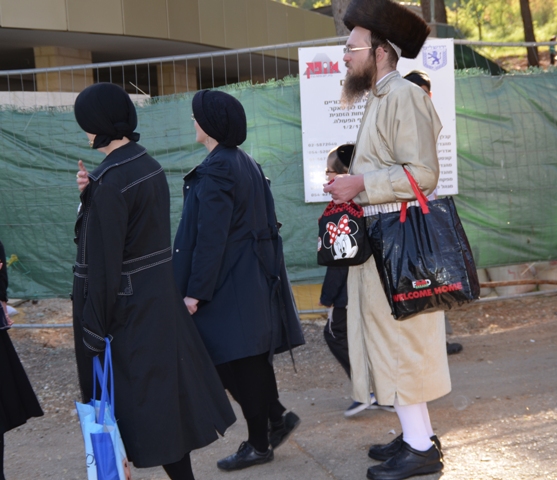 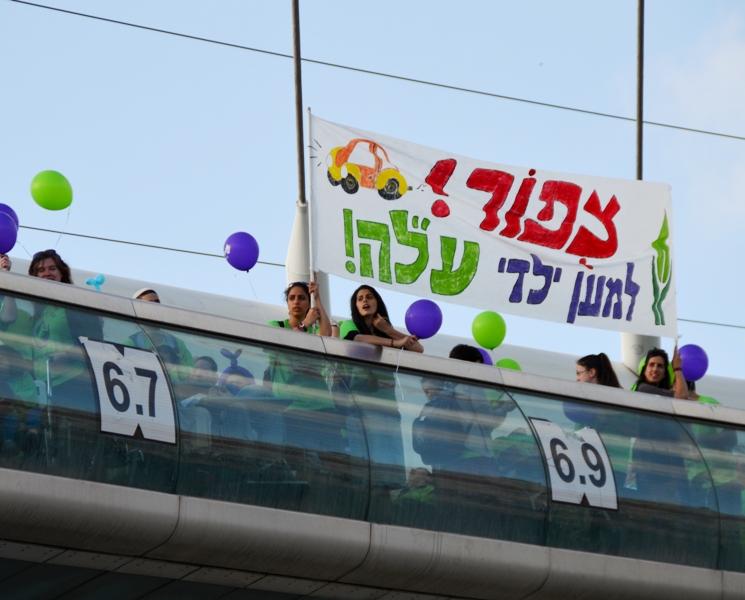 as last year Aleh Jerusalem crossed the Bridge of Strings, 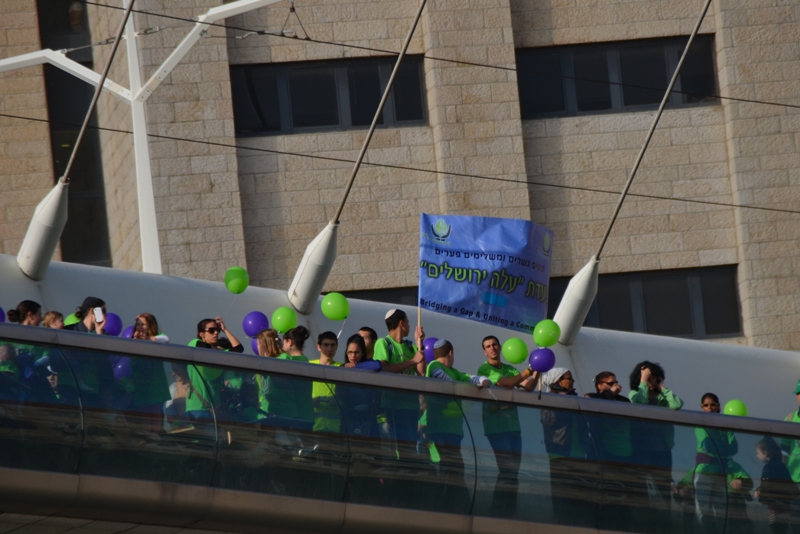 It was a traffic and heart stopper, 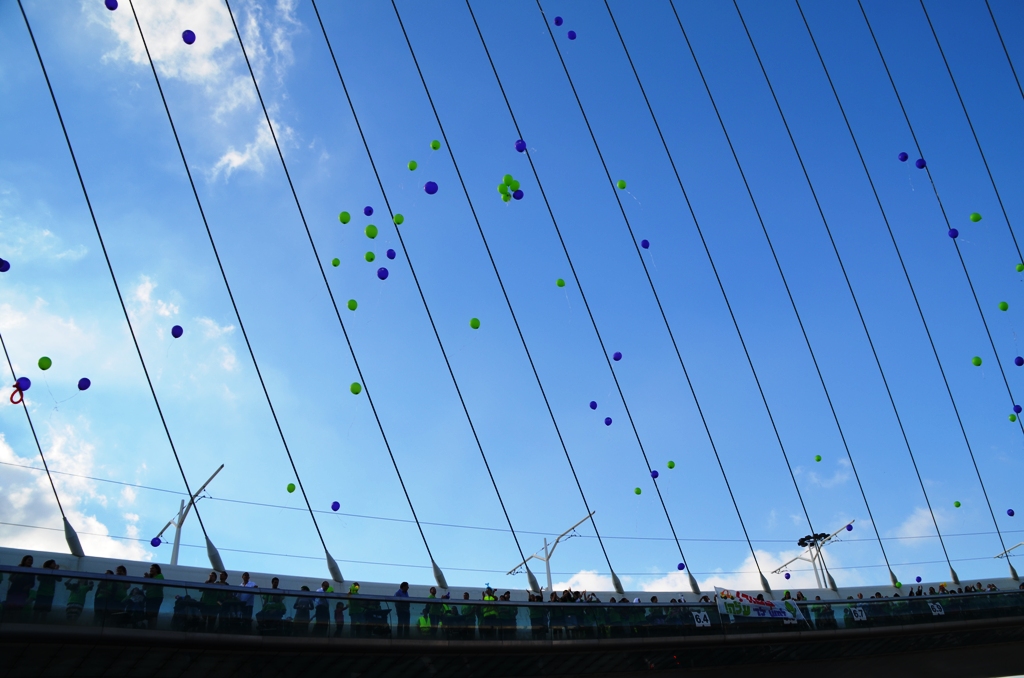 as hundreds of green and purple balloons were released. 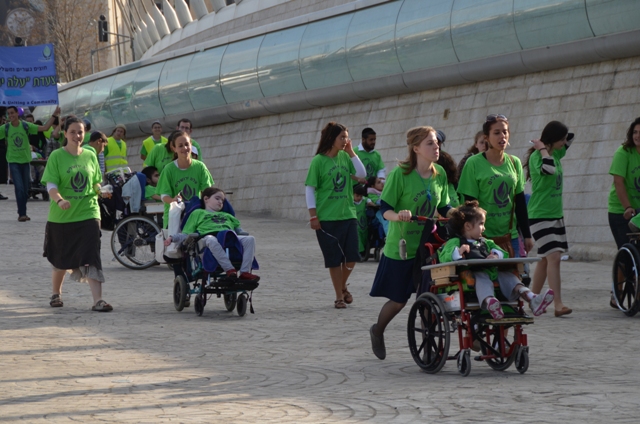 Students, their families and dozens of young enthusiastic volunteers

brought  a woman I spoke with to tears.

Sorry that it loses much in the translation, but

she slowly shook her head back and forth, repeating “Really something!”

The Old City was busy and crowded. 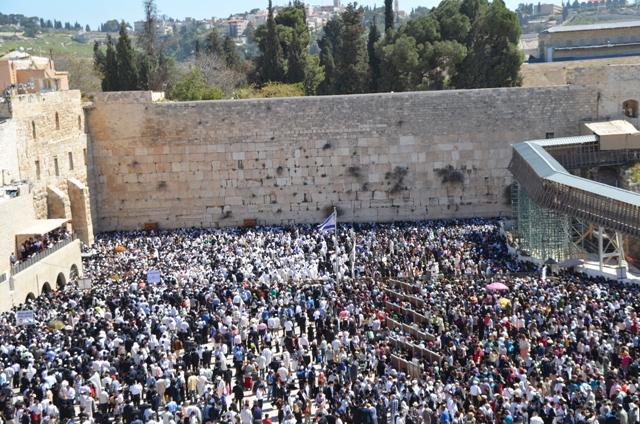 The crowds at the Kotel, Western Wall, were big, really huge, 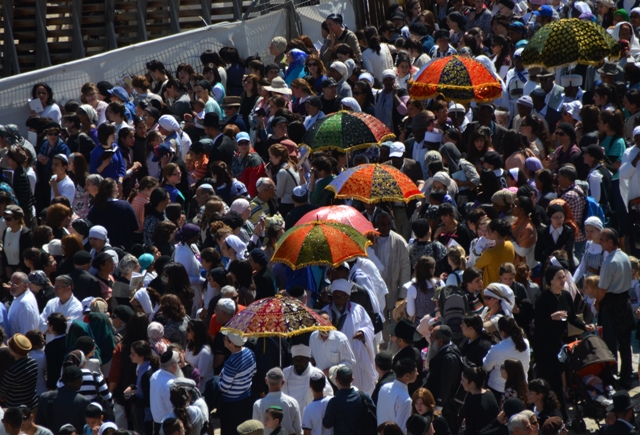 with the Ethiopian leaders under their colorful umbrellas

arriving at the end of Birkat Cohanim, the Priestly Blessing.

They managed to slowly move through the crowd as they do every year.

Centuries ago when crowds came to the Temple in Jerusalem on Passover, 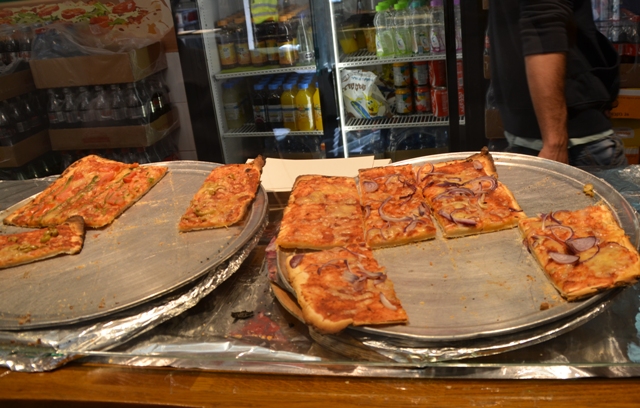 how did they manage without kosher for Passover pizza, 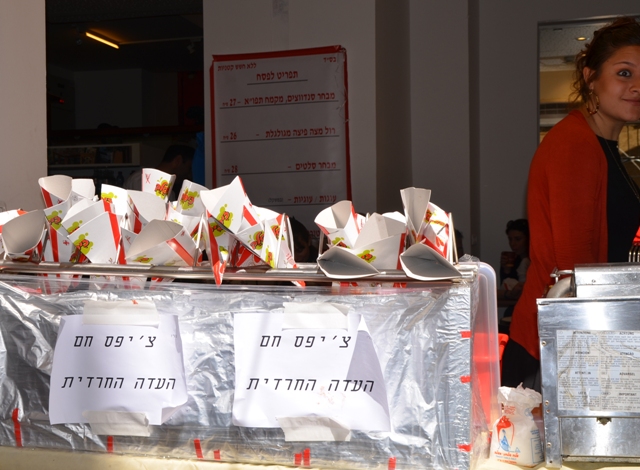 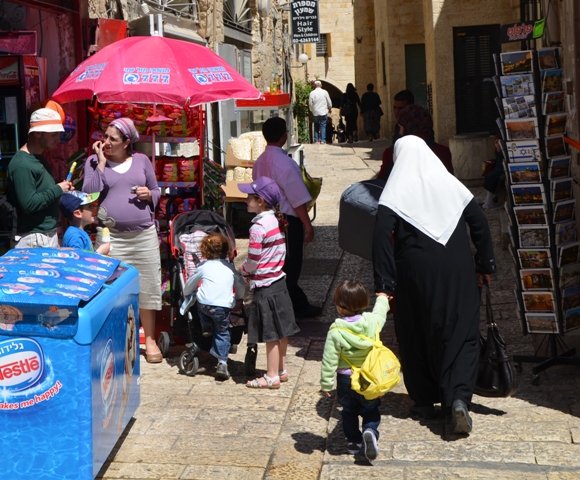 and plenty of ice cream for sale like there are now?

Passover was a great holiday time. 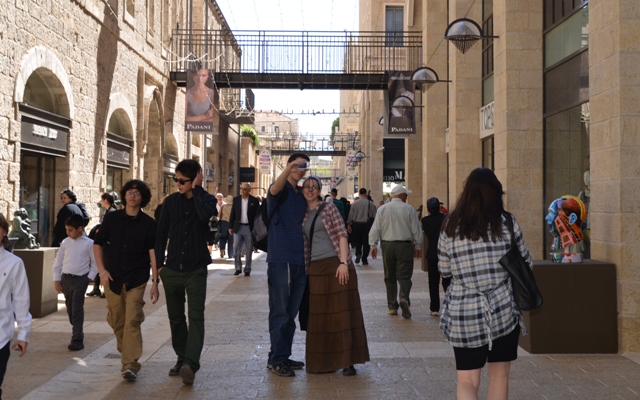 People were smiling in Mamilla Mall and taking photos every day. 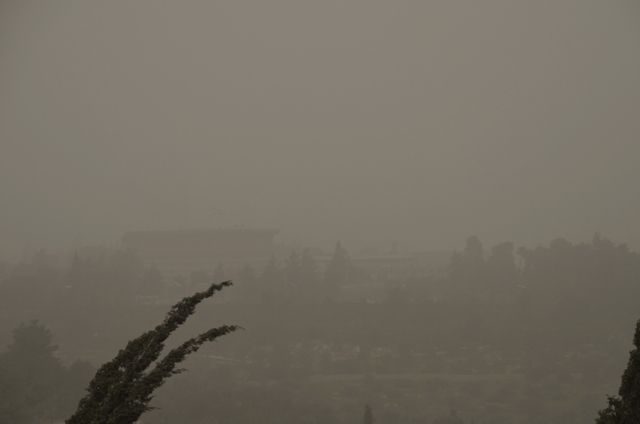 a terrible sandstorm came in the last afternoon of Passover.

This was no April Fool’s joke, that is what the Knesset looked like.

The air quality made breathing outside difficult.

Winds blew away most of the sand the next day,

and as the rest of world celebrated an eighth day of Passover.

In Israel, Passover was official over, but still a school holiday.

The Moroccan custom of Mimouna has become increasingly popular, 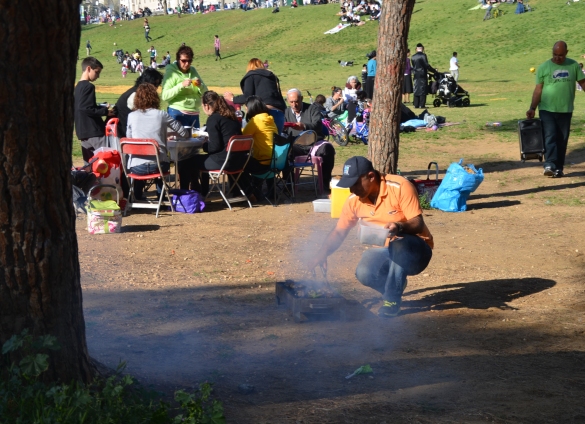 so again Gan Sacher was filled with families grilling 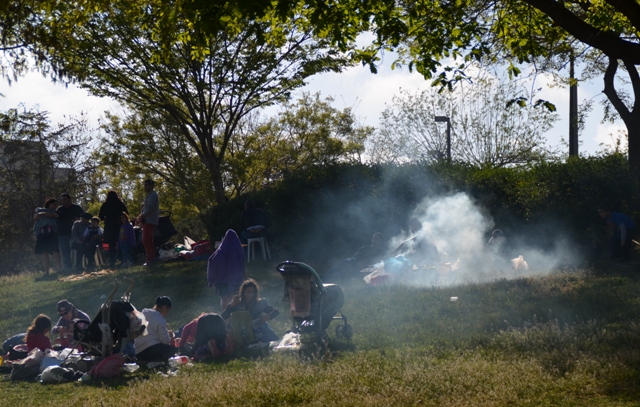 and smoke filled the air.

Now it is time for the Mangal or BBQ season.

Since I started working on this, yesterday and today

there have been several more rockets

and new “projectiles” fired from Gaza into southern Israel.

It looks as if things are heating up down there again,