Sukkot holiday week in Jerusalem, Israel, was a busy time, the best and biggest celebration in several years.

Many things were happening at once, here is a recap of only a few events.

With the most international visitors since 2019, the crowds were really impressive.

After the pandemic years of Israel’s closed borders, groups of tourists have returned to the Jerusalem streets.

Despite the end of pandemic restrictions, some street services are still going strong on Jerusalem streets.

The scene at Jaffa Gate was back to the best days before corona closings.

Inside Jaffa Gate people were coming and going all day from the Old City.

However, even at First Station, it was possible to find a quiet time in the morning along the old train line track.

Big Sukkot crowds at the Kotel, Western Wall were the topic last week.

Did you notice the special small sukkah available near the entrance bridge to the Temple Mount for those who waited a long time for a turn to go up?

A bigger sukkah above the Kotel Plaza even had glass chandeliers.

However, in the crowded public sukkah on the Plaza people had to stand.

One man was able to make the blessings, while others stood and watched.

Big, but not best the crowds on the stairs to and from the Kotel. The planned elevator is not going to be completed in the near future.

One of the best – were the multiple stations where drinking water was offered for free, and this one in the Jewish Quarter was “manned” by children.

Much of the Rova Plaza in the Jewish Quarter was filled with big Sukkot.

The Citadel Hotel had dozens of small sukkot on balconies.

Once again, Kikar Safra had the biggest sukkah in the city municipal square.

However, the sukkah was closed to the public on Wednesday afternoon.

Workers were already setting up hundreds of chairs for a city-sponsored Hakel event to be held that night.

People who came to the big Jerusalem public sukkah were turned away.

While nearby, a private sukkah was set up with a sign welcoming everyone.

The biggest chandeliers were in the King David Hotel sukkah.

The desserts on display looked great. I wondered if one could gain weight by looking.

A beautiful private party was set up off the King David lobby.

And as always, a beautiful flower arrangement was displayed in the lobby.

The Inbal Hotel also had a big beautiful sukkah for guests.

In addition, there was a smaller colorfully decorated front-yard sukkah this year.

They also had an impressive floral arrangement in the main lobby.

The Inbal added a comfortable outside sitting area, the best way for guests to meet with visitors who were corona conscious.

A peek into the Waldorf Astoria sukkah, big and impressive as always.

Outside, this big sukkah at Mamilla Mall across from the Old City walls seemed to be filled with people every time I went by.

Sukkot were built on porches, big and small, wherever you looked.

The sukkah at the Israeli President’s residence appeared accessible at the entrance gate area for the annual Open Sukkah reception.

Multiple colorful venues for selfies were spread around the grounds.

I went to get early photos of the staff setting up inside the sukkah,

before the public was admitted.

As you see, it got a bit too crowded to see the agricultural displays.

Very, very crowded–which could be why the President’s staff tried various other ways for him to make appearances during the day.

If you are curious, I took this photo of the other sukkah in the Beit Hanasi back garden, the one the President’s family and staff can actually use.

I heard people with young children had a negative experience with the security checks. It was not pleasant to remove sleeping babies from their strollers to be checked to enter, but these actors were two of many colorful characters who tried to keep the big crowd smiling.

I tried to see how long the line was to enter, but the Jerusalem Parade marchers were well on their way past the President’s House as I was leaving.

And they kept coming. There were three Jerusalem walking routes in the morning, as well as one in the afternoon.

Sukkot is over. The marchers have gone home. School is starting again. Government offices are open ‘after the holidays’ – finally.

The dinosaurs on display in the Jerusalem Botanical Gardens are leaving.

The big exhibition is on its way to a new location.

But the newest augmented reality art exhibit called Seeing the Invisible will be available after the holidays,

as well as the YAAR art exhibit at the Terrarium. More later on that…

The Pilgrim’s Road under the Old City from Ir David to the Kotel has been developing over the past five years.

It now has an exit near Robinson’s Arch near the ancient Temple stones.

For three intermediate days of Sukkot, there was a unique exhibit called “Arteology: The Power of the Ancients in Contemporary Forms” located in the cistern at the end of the route below the Kotel.

I liked the young boys climbing in the area above, the best of the past and the future coming together in Jerusalem for Sukkot.

My friend Stu Gherman also likes to share photo images of the Jerusalem streets and his exhibition at Heichal Shlomo goes until November 3rd.

Three years ago YA Fine Art Gallery opened. Then COVID kept the doors shut much of the time and people had to stay away. Yehoshuah Aryeh has fine art images, not only of Jerusalem but in many locations around Israel.

Whew, it was quite a big and busy holiday week on the Jerusalem streets!

No longer are the bright and colorful lights wishing all a happy Sukkot holiday on the wall of the Old City near Jaffa Gate.

The lights of the sukkot at First Station at night and all around Jerusalem were turned off and are being packed away until next year.

The day after Simhat Torah the Pizza Hut hut was still up, so I had to take one more sukkah photo after I said no more.

May the holiday blessings keep all well in the year ahead,

and may the Jerusalem streets stay busy with good and even bigger things happening for all to enjoy.

The sounds of the shofar blasts broke the silence over the darkening Jerusalem streets as Yom Kippur ended on Wednesday night.

Then the sounds of hammers banging and clanging were heard as people began to build their sukkah.

Each morning this week I had to stop and try to remember what day of the week it was and what had to be done.

After Yom Kippur, it was time to prepare for Shabbat and the Sukkot holiday starting on Sunday night.

On Thursday evening, in the midst of Shabbat and Sukkot preparation, dozens of people gathered in Gan Haatzmaut, Independence Park.

Israel stands with the Iranian people was the theme of the event.

I remember that for Australians, long before these new direct routes, Tehran was a favorite stopping place for those flying on holidays. Of course, since 1979, that is but a fond far-off lingering memory.

Masha Amini and other women have been murdered. It was time to let them they are not alone, we are thinking of them.

Next to the park, the large sukkah at the Leonardo Plaza is ready.

Look up. Lights were on this apartment house sukkah in preparation.

And now that the borders are open after 2 years of corona conditions, people are returning. A long-time favorite sukkah was being installed.

Day or night, with etrogim and lulavim and sukkah decorations for sale.

Anywhere but the Jerusalem streets do you find baskets of string for sale in bins outside of the electrical appliance store at night?

Signs are up for Hashana Raba programs, with music and learning all night,

as well as the mega-musical events on the intermediate days of Sukkot.

Too many events and activities to list now, but the official ones are HERE.

Our modest new sukkah is ready.

The holiday challah and treats are prepared.

Hope to see you celebrating the holidays this week on the Jerusalem streets.

Tens of thousands of visitors have arrived. Rental cars are booked and fill the streets.

Traffic can back up any time anywhere, especially in Old City when streets are closed. 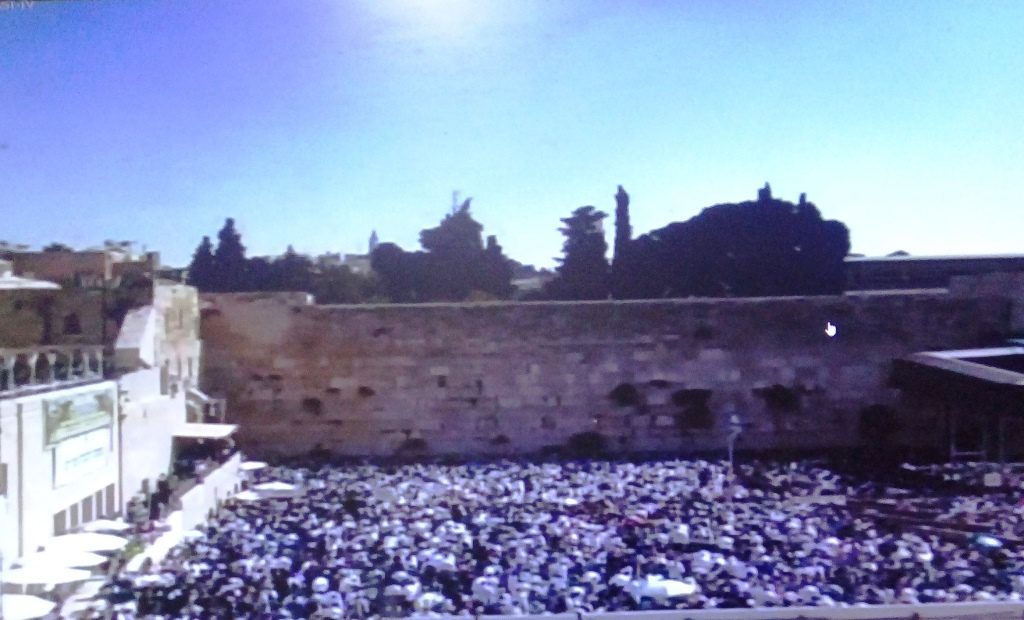 Tens of thousands crowd into and around the Kotel, Western Wall Plaza for the annual Birchat Kohanim, the Priestly Blessing.

This year was different with no helicopters circling over Jerusalem during the blessing. 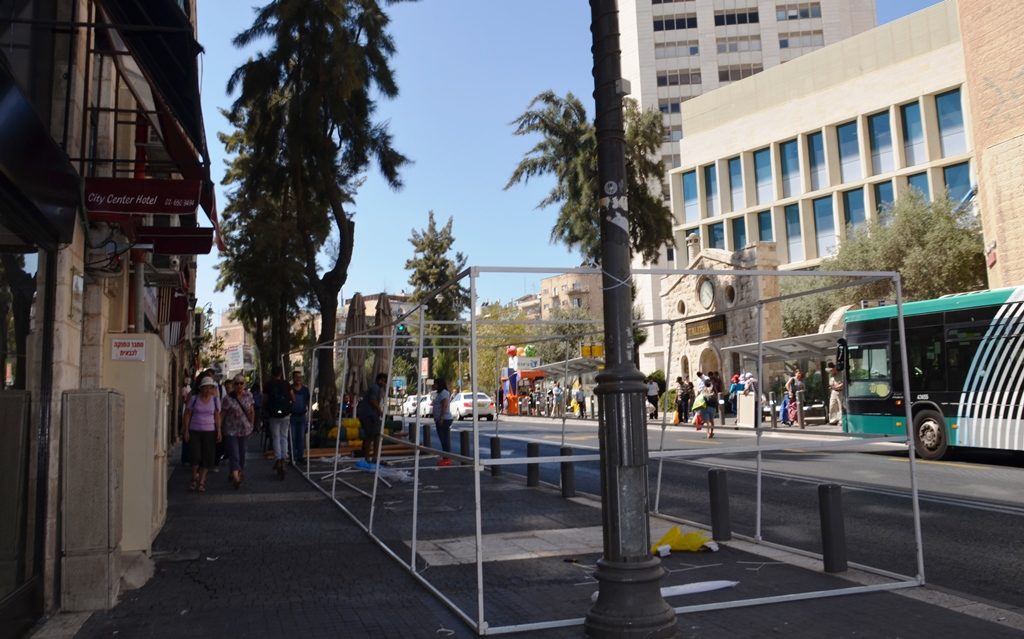 The sidewalk along King George Street is filled with sukkot from nearby eateries. Here the frame of one sukkah is being assembled before the holiday.

Small signs and locations of places to buy and build a sukka appear all around Jerusalem before the holiday. 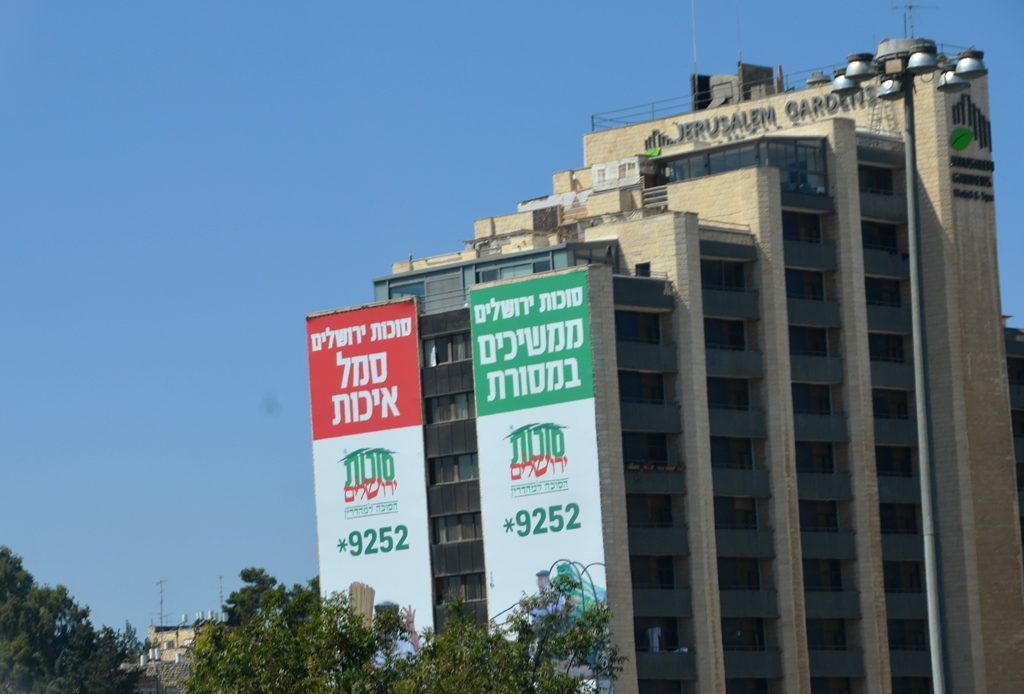 These huge signs were hard to miss on the side of the building. 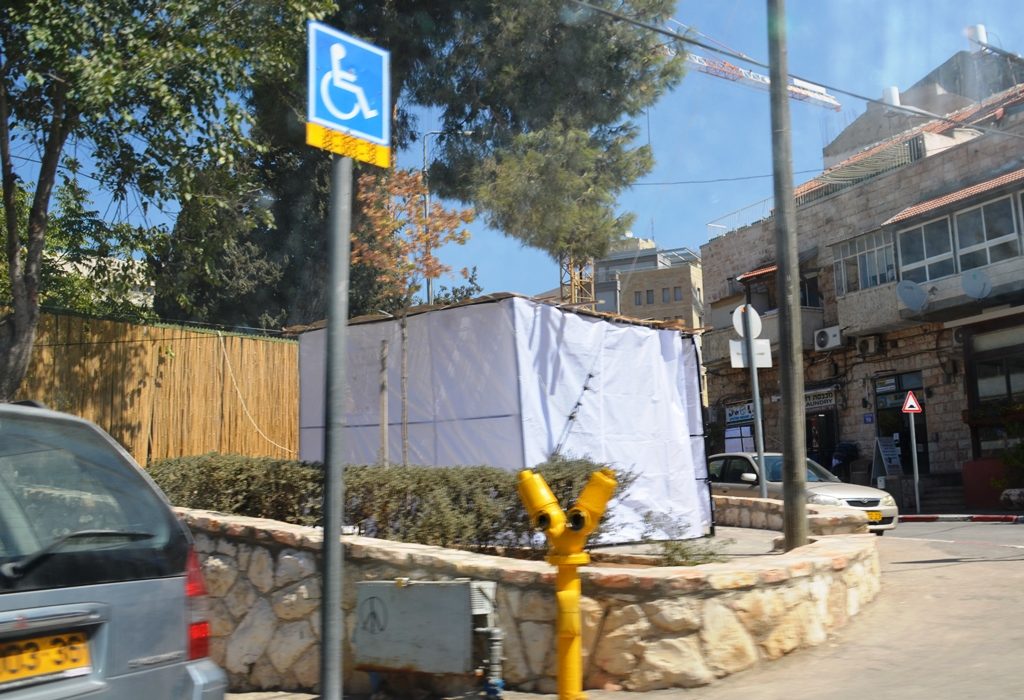 A sukka could be found on empty corner spots, 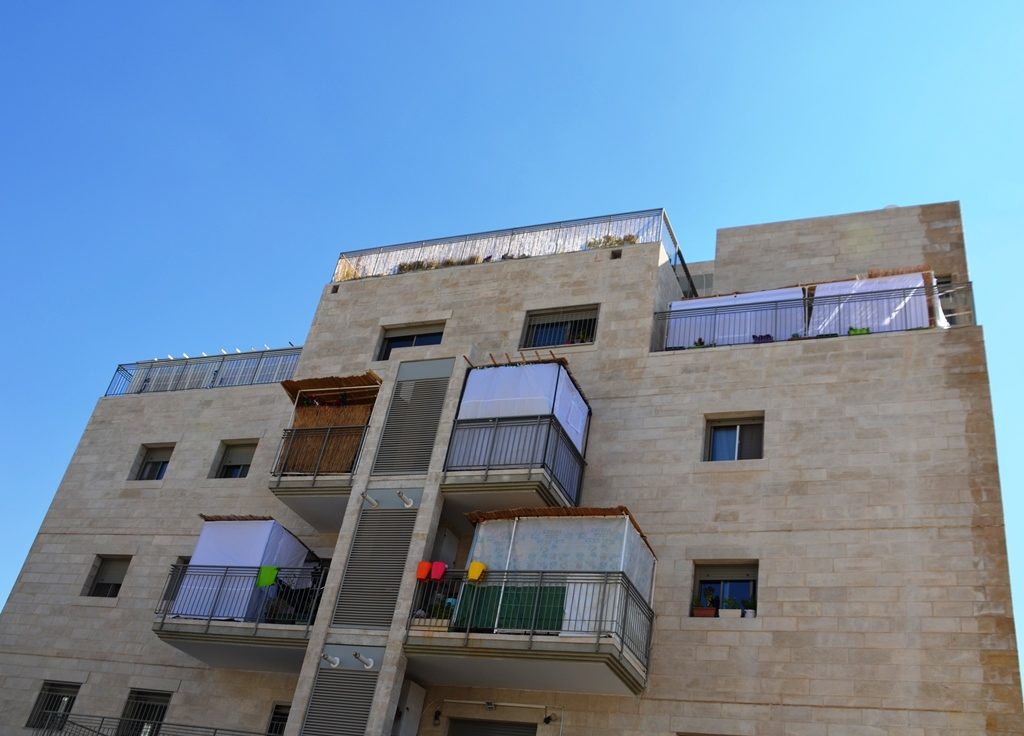 on porch balconies on front of apartment buildings, 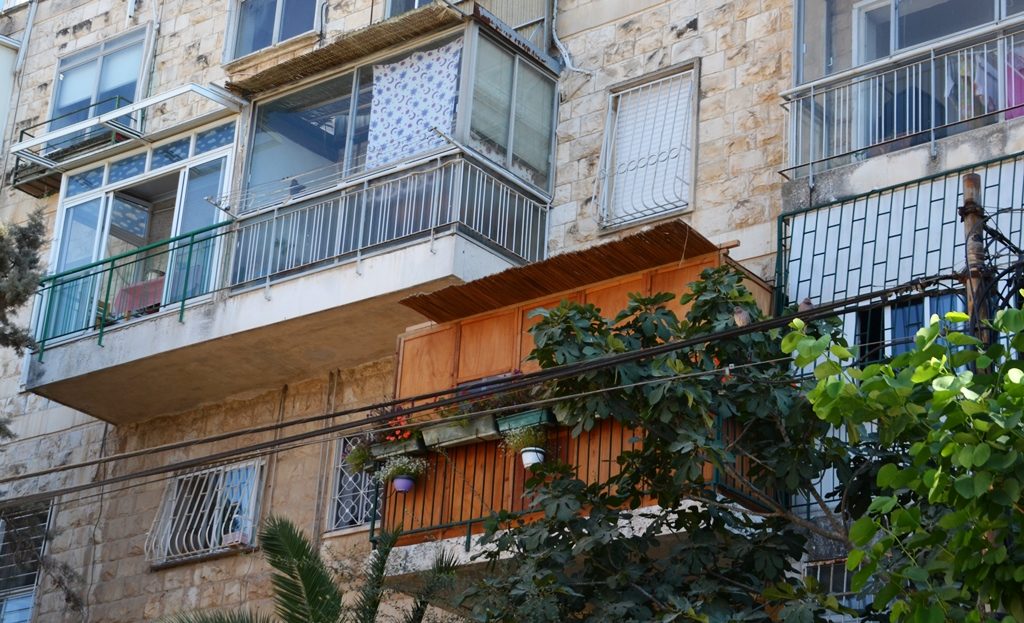 and tucked away on small porches in back of buildings.

There were too many Sukkot festivals for families to list them all here.

The weather during the day was perfect for parades, musical performances, and more held each day in Jerusalem. 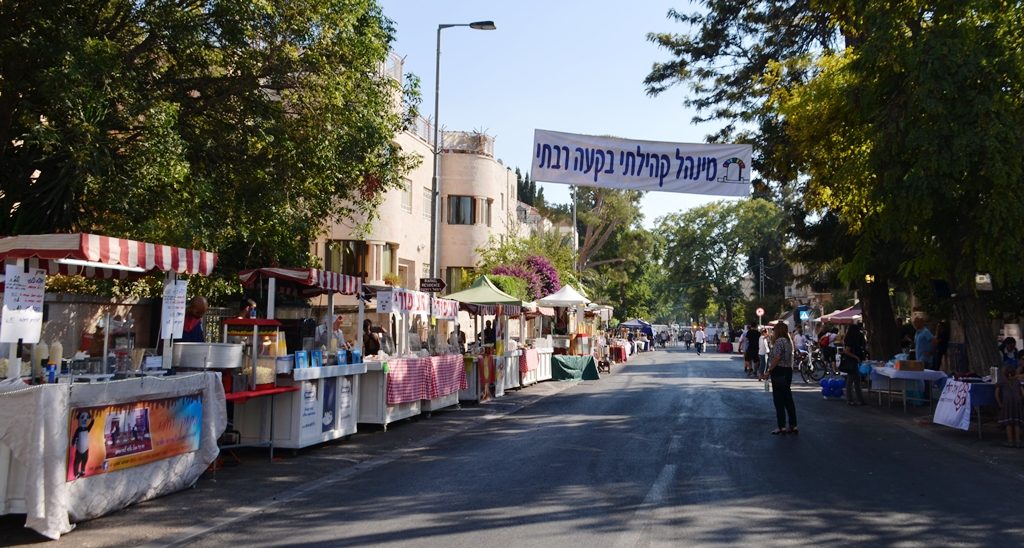 The usually busy Derech Beit Lehem street was cleared of traffic for an evening street festival. 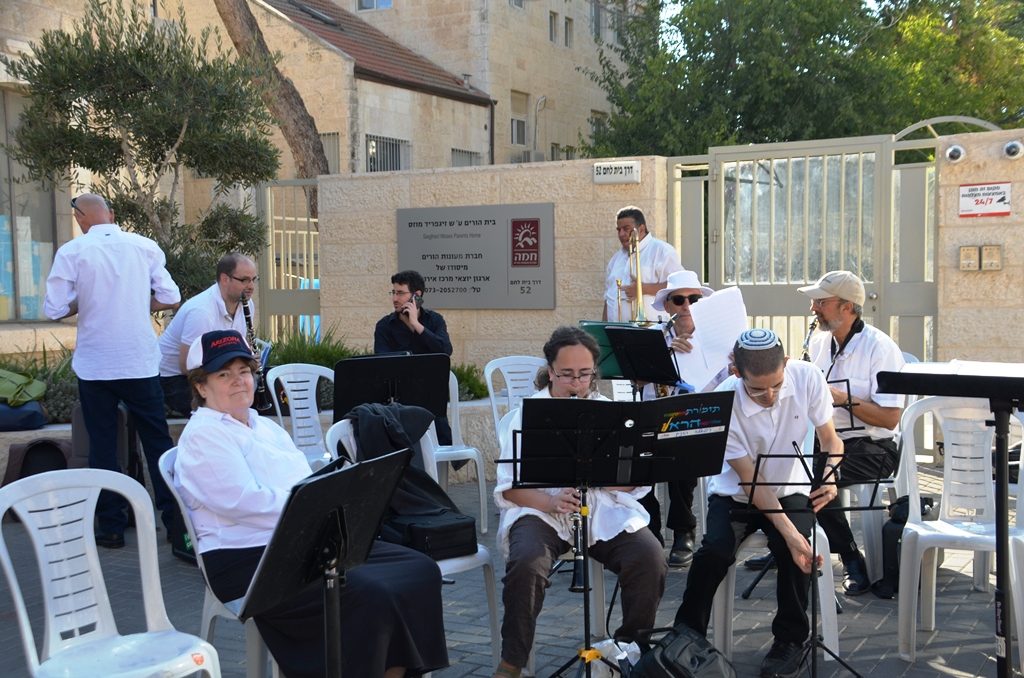 These were a few of the musicians rehearsing in the afternoon. 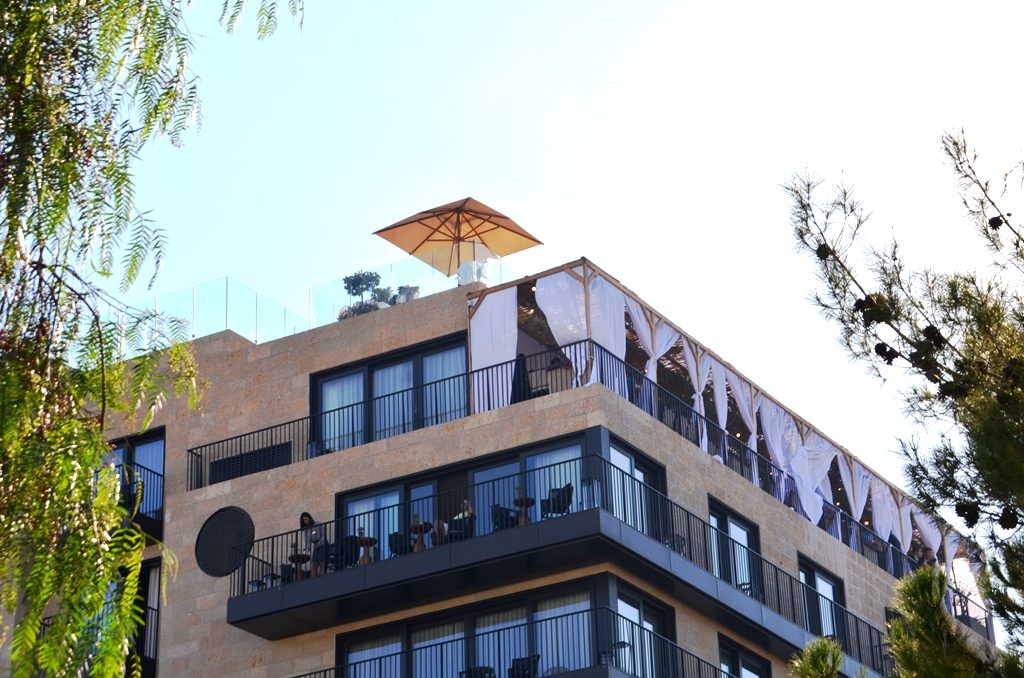 There is a sukka on top of the new Orient Hotel. 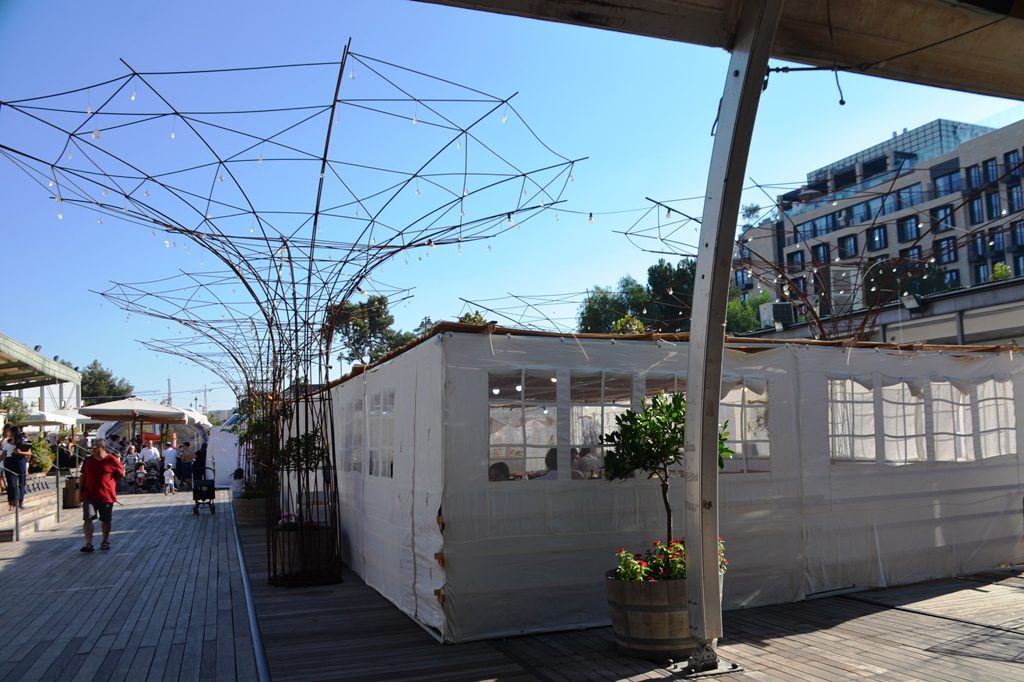 Across at First Station, kosher eateries have large sukkot. 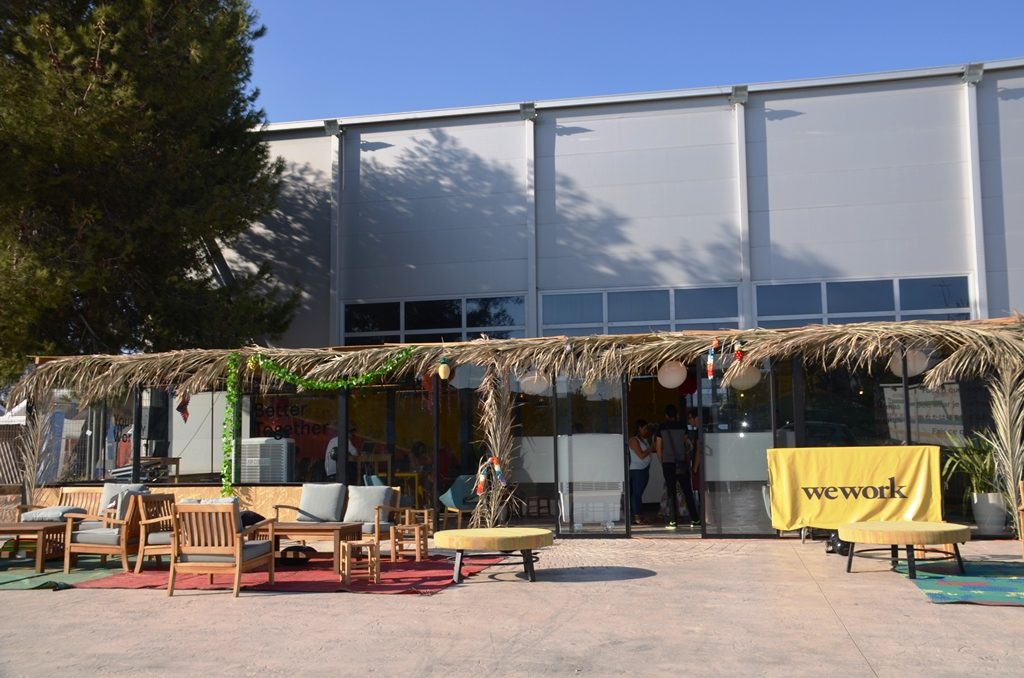 But new and different this year, there is a WeWork sukka at First Station. 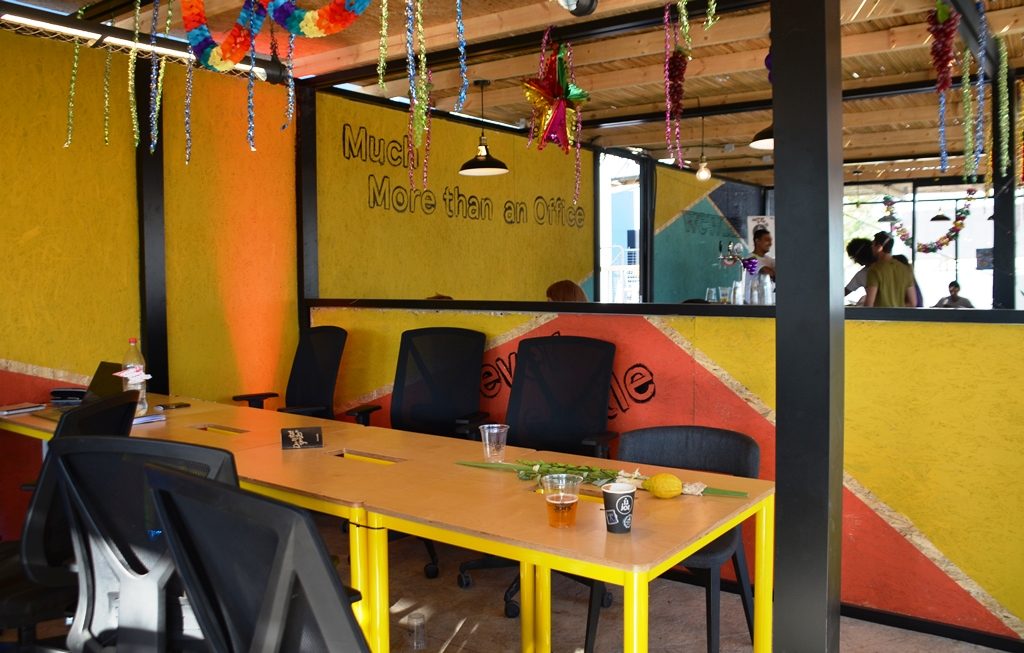 Where else but Jerusalem, will you find, free wifi, beer, coffee, and working spaces, with a lulav and etrog on the table? 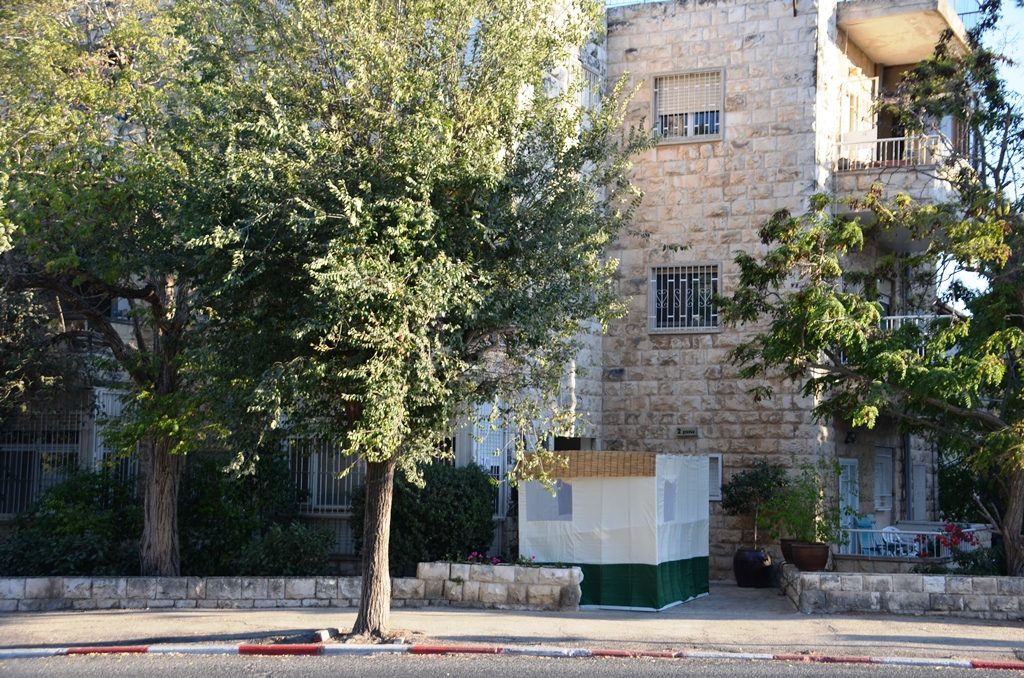 From a private home sukka, 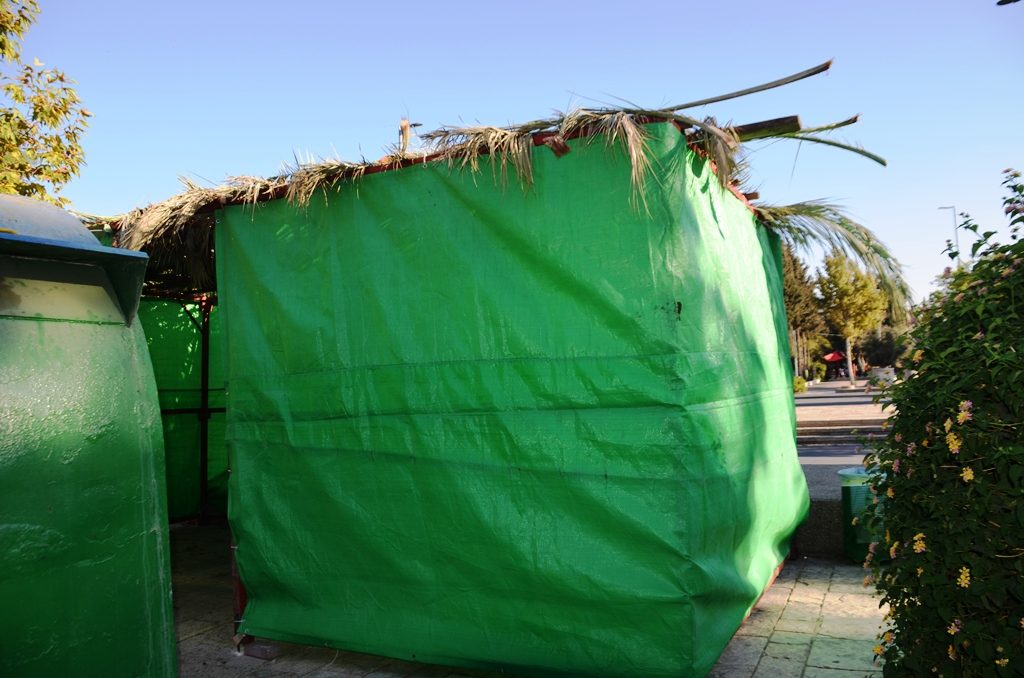 to a simple sukka in public park, 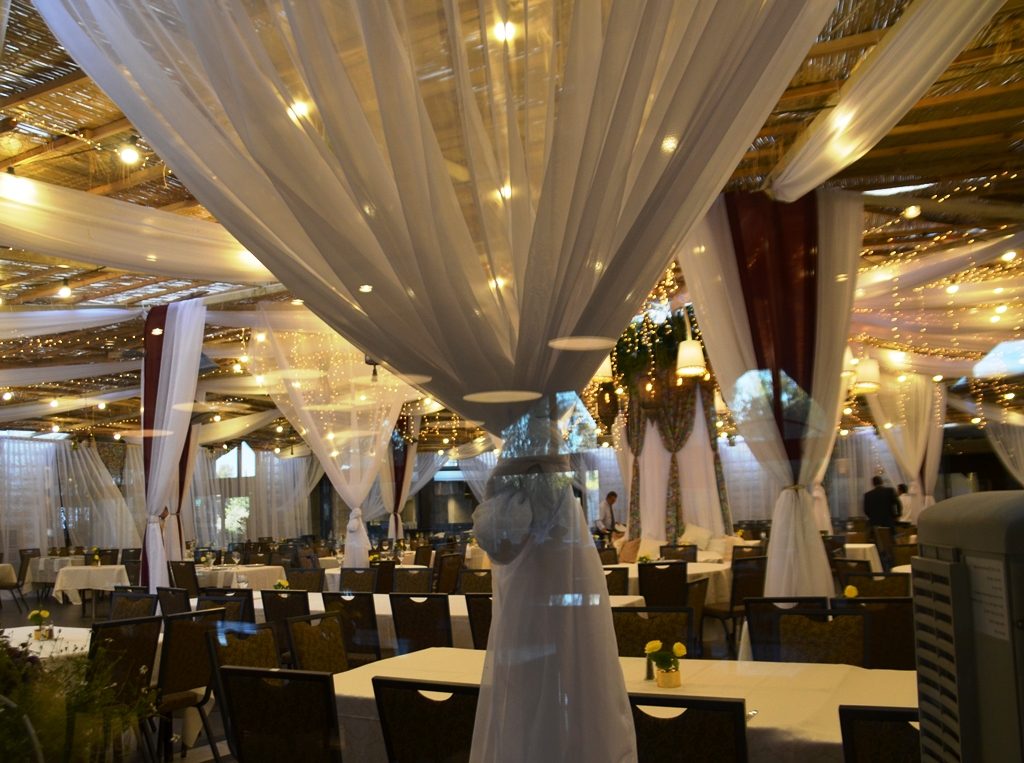 to a large elaborate sukka, as in the Inbal Hotel atrium– there is no place for Sukkot like Jerusalem. 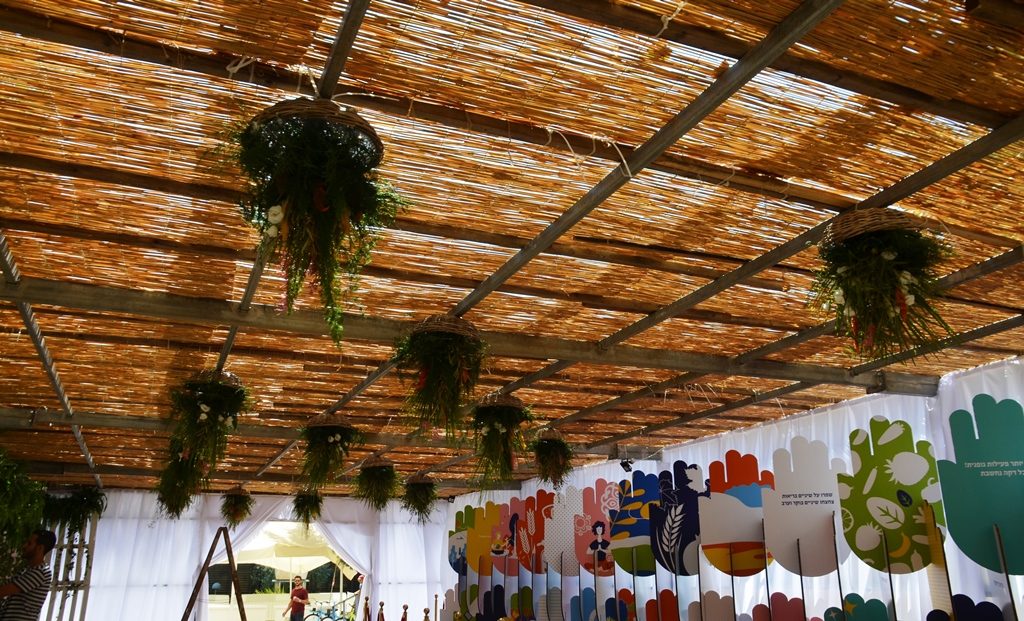 On Thursday, at Beit Hanasi the President’s Residence will be open to public.

Here is a first peak of the large public sukka.

Check back next time for a full tour of exhibits for this year’s healthy theme. 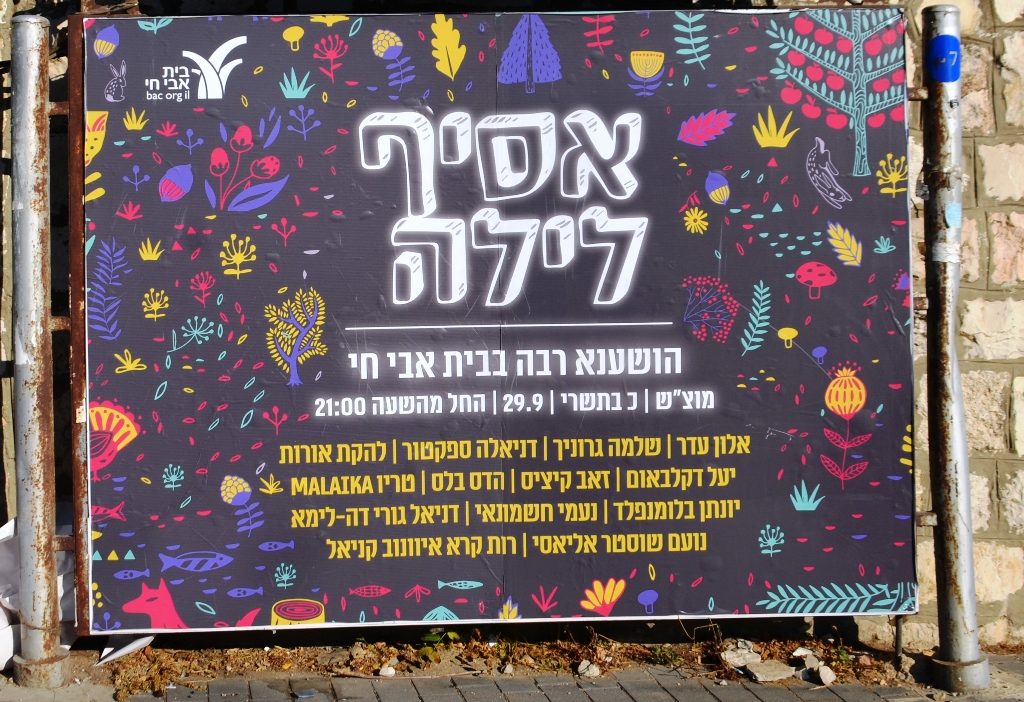 And there is still much more of the holiday to come…and enjoy.

Happy holidays to all.