What a week it was in Jerusalem, Israel!

Only a week ago it was Purim,  however, it feels like ages ago.

In the past week, couples have gotten married on rooftops and had their wedding photos taken in supermarkets.

The courtyard outside Mercaz Harav Yeshiva was scene of a wedding ceremony with two young men on each balcony watching, singing, and dancing, to keep within the limits of “social distancing.”

Jerusalem Mayor Moshe Lion offered his office as a location for weddings as wedding halls were closed. Two couples took advantage last night, and received free canapes as a bonus.

With the canceling of educational programs, thousands of overseas students are being evicted from their dorm rooms and searching for the fastest flight home.

Meanwhile, olim, new Israeli residents are still arriving daily. They are going from the airport into 14 days of self-isolation, as are all overseas arrivals. 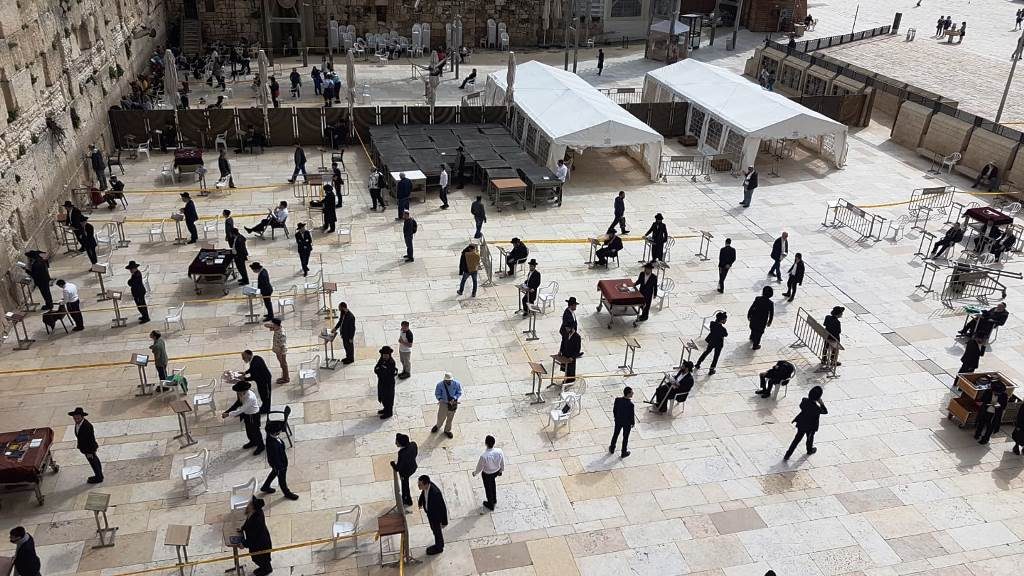 One of the most popular images this week was sent out by the Western Wall Heritage Foundation, of morning prayers at the Kotel, where social distancing was enforced. Later that day scaled-down Bar Mitzvah celebrations were held.

Babies are being born. People are dying. Life is proceeding at a much slower pace in Jerusalem and around the world.

Cable TV offered suggestions on what to watch and what NOT to watch during COVID-19.

After days of cold rain and fog, on Monday the sun came out in Jerusalem, Israel. 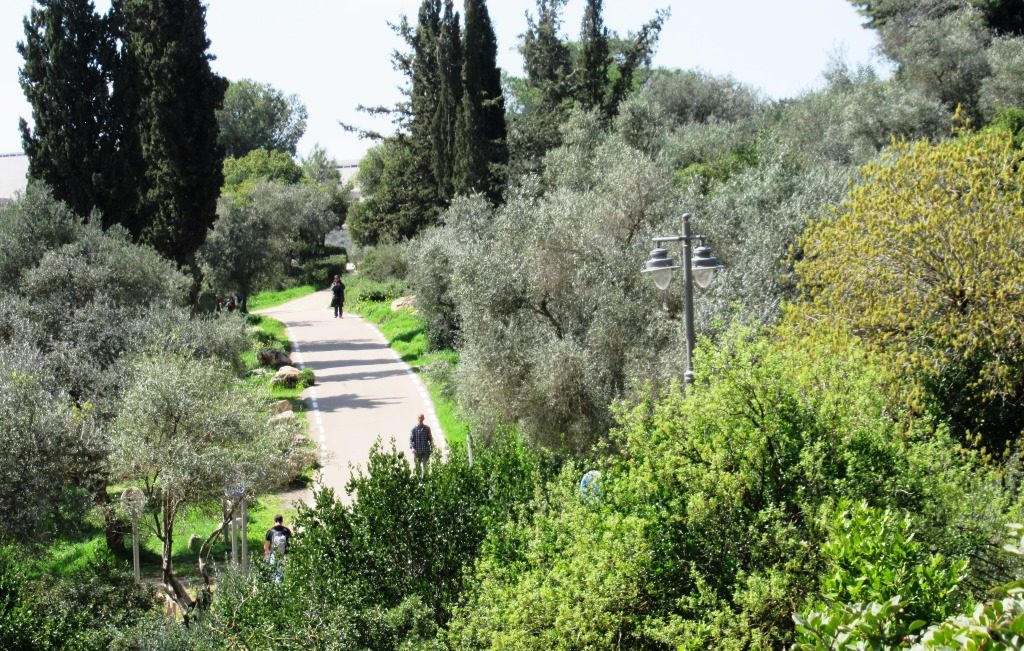 After days indoors, I thought I would take a short walk in the sunshine.

In Israel Sunday is a regular workday, and for a change it felt like a Sunday elsewhere.

My usual empty nature paths were not empty, so I took a different path. 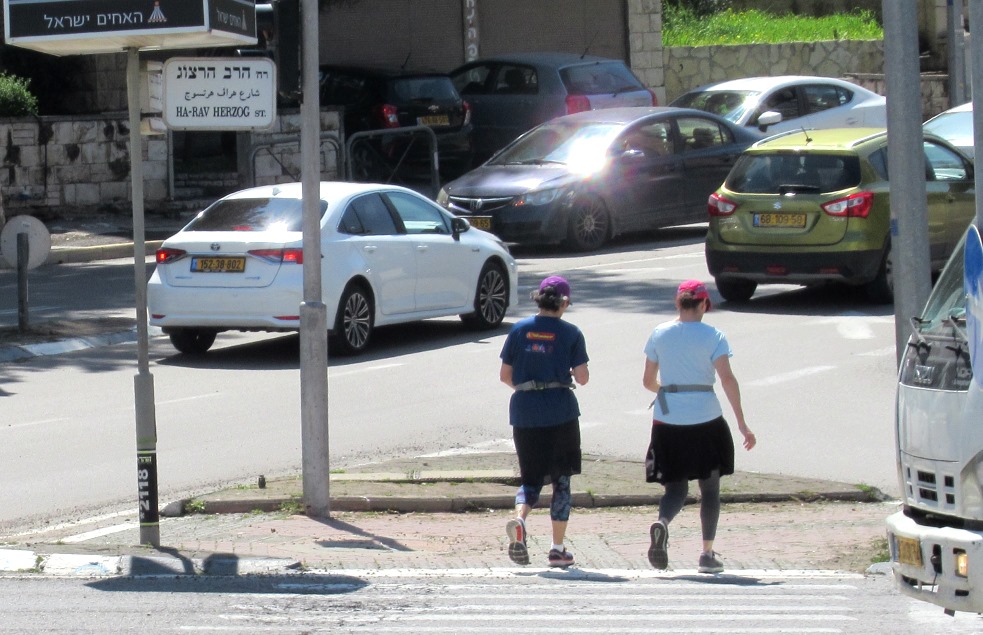 The Jerusalem Marathon was postponed until November, but my friends I see every year were out running. 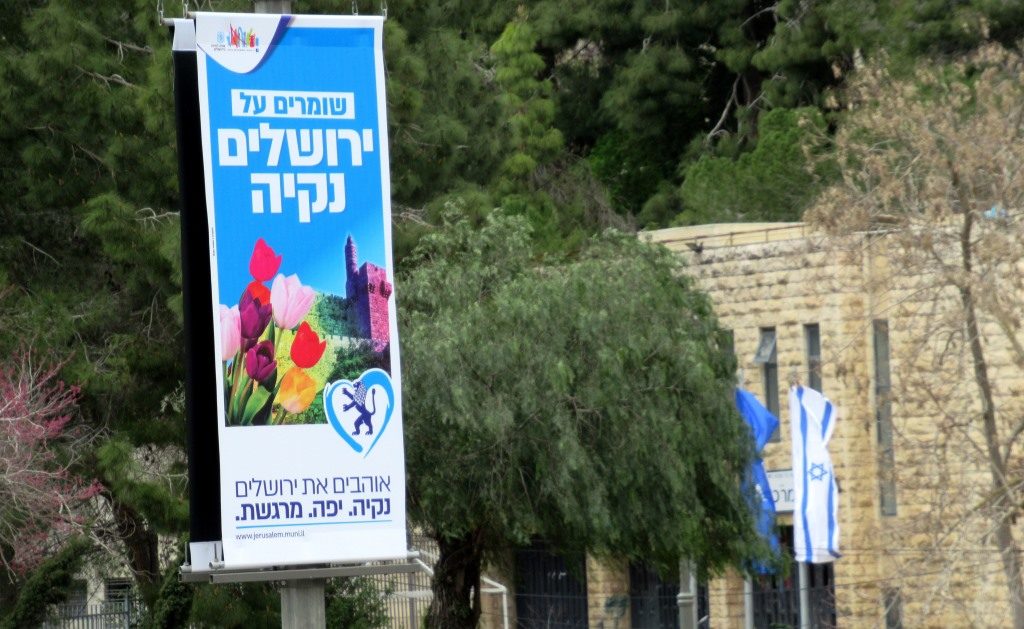 Keep Jerusalem clean signs have taken the place of upcoming events announcements, all canceled or postponed. 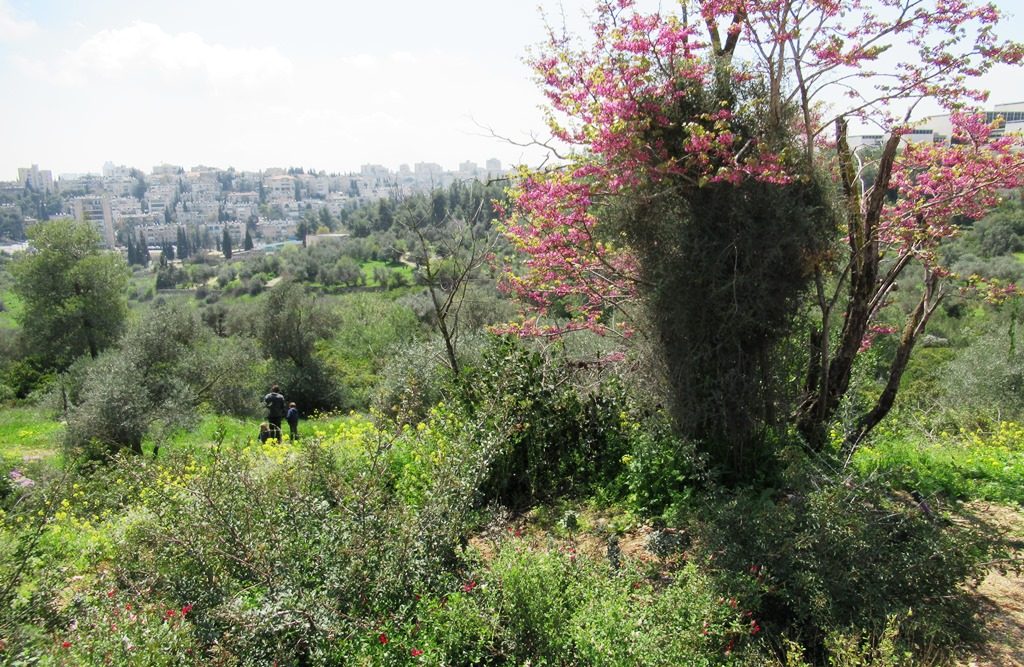 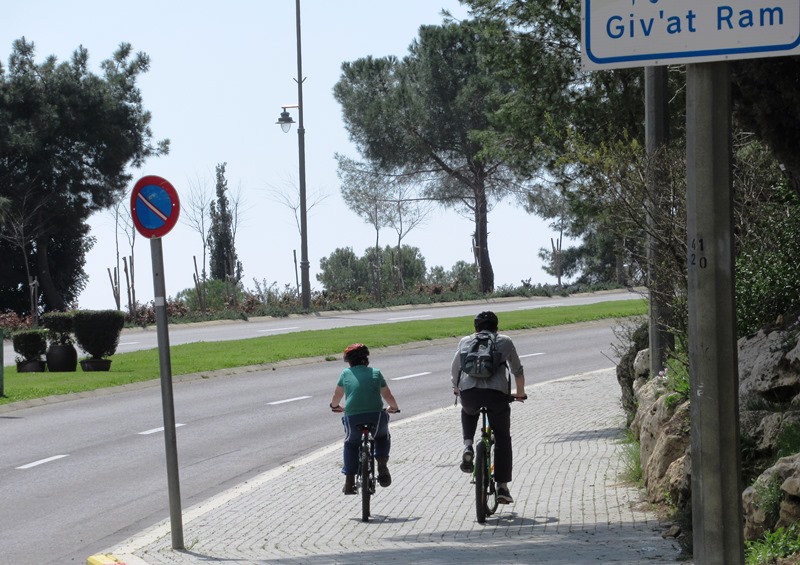 and cyclists had clear footpaths to ride on. 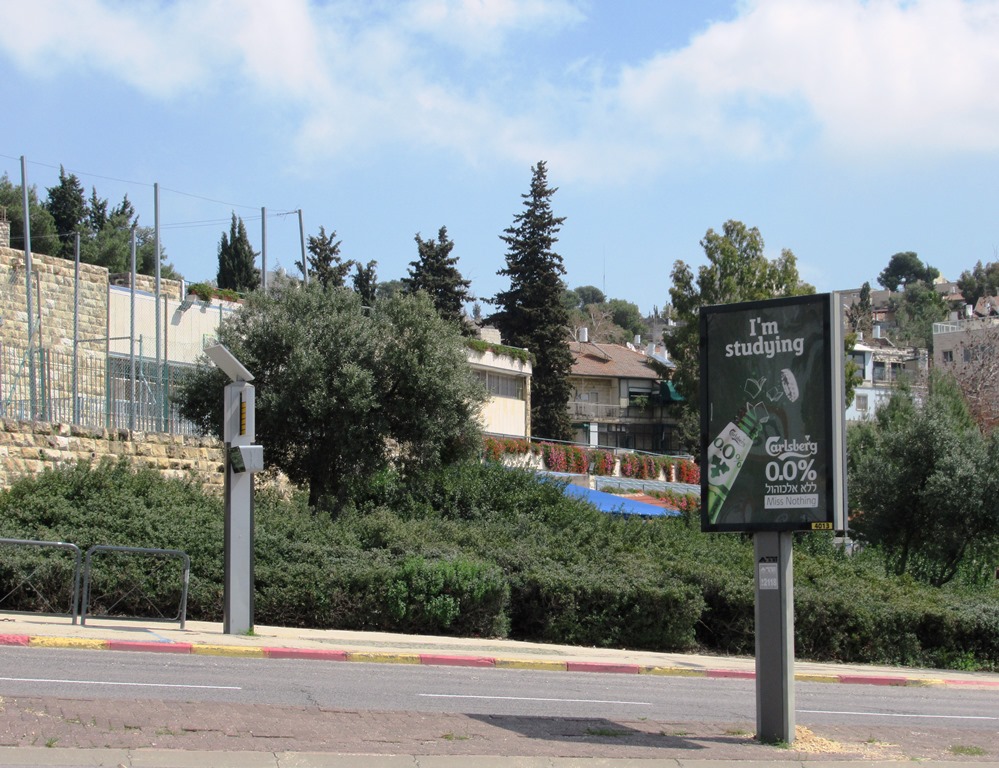 Schools were closed. “I’m studying” advertises for an alcohol-free drink – at home. 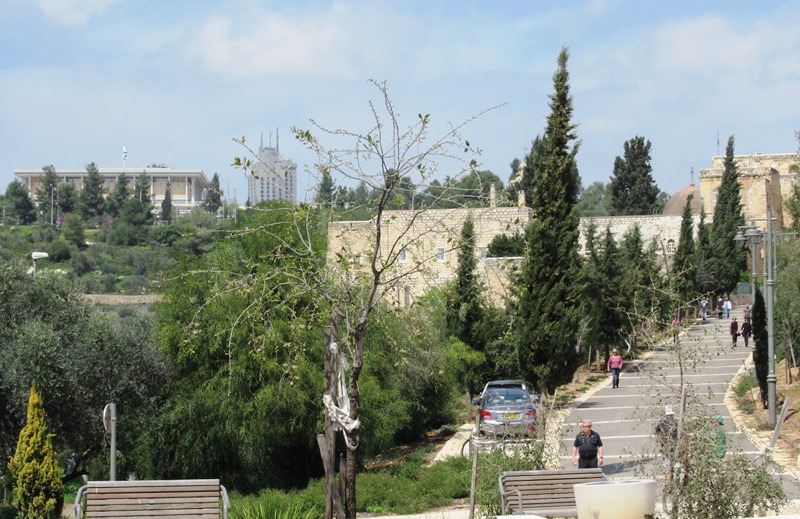 Whoever thought Monday-felt-like-Sunday days would continue was disappointed with the latest announcement from the Prime Minister.

“I ask you not to leave your homes and stay inside as much as possible. At the moment, I say this as a recommendation. It is still not a directive but that can change. What I am asking you today is to reduce your going out to what is essential. I assume that you are familiar with the English saying ‘My home is my castle.’ I ask that you adopt exactly this. Your homes are your castles for protection against the Coronavirus, on condition that you also act responsibly at home. Then stay home.” 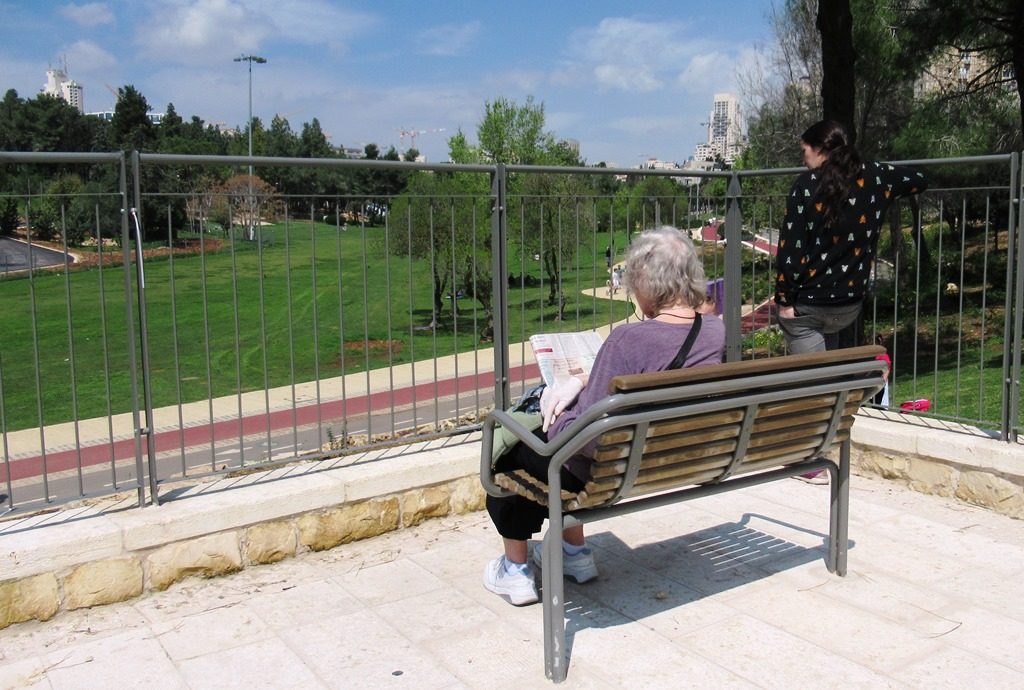 On Monday,  this woman was wearing gloves while reading the paper outdoors. 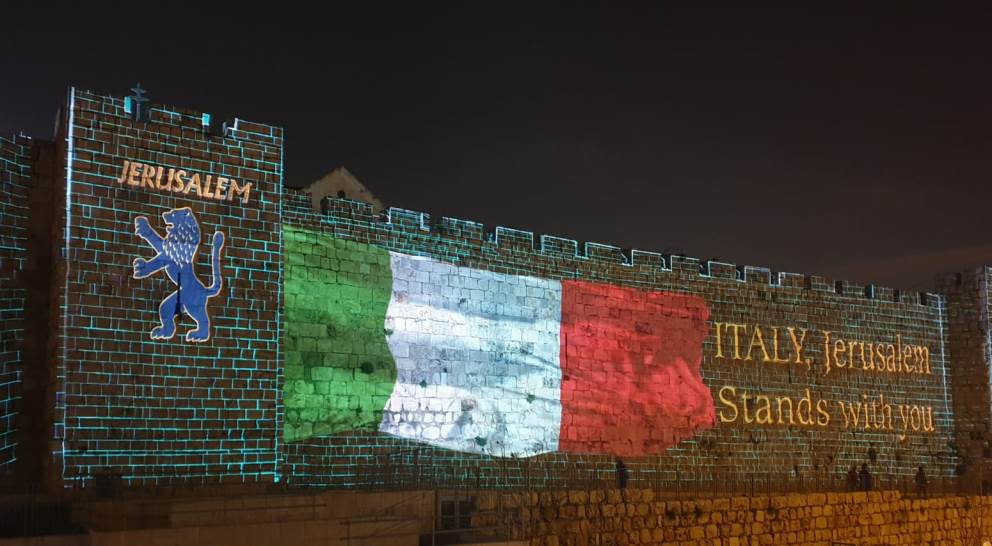 Jerusalem Old City walls were lit with a message for Italians. 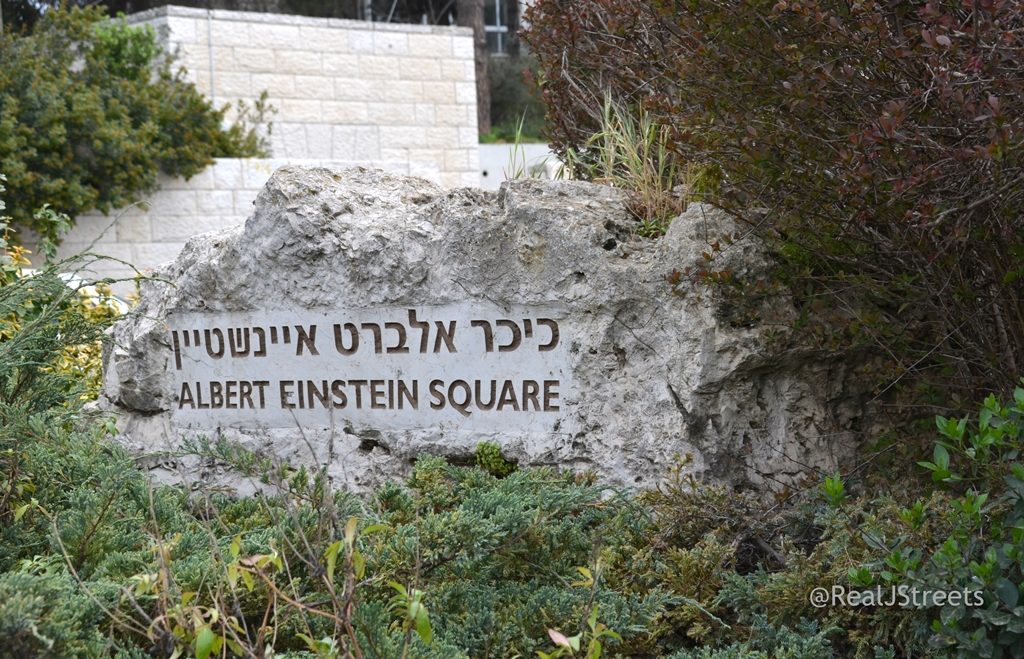 I think most people overlooked Pi Day this year, celebrated on March 14th, also Albert Einstein’s birth date in 1879. I did not go to Albert Einstein Square this year but posted an old photograph. 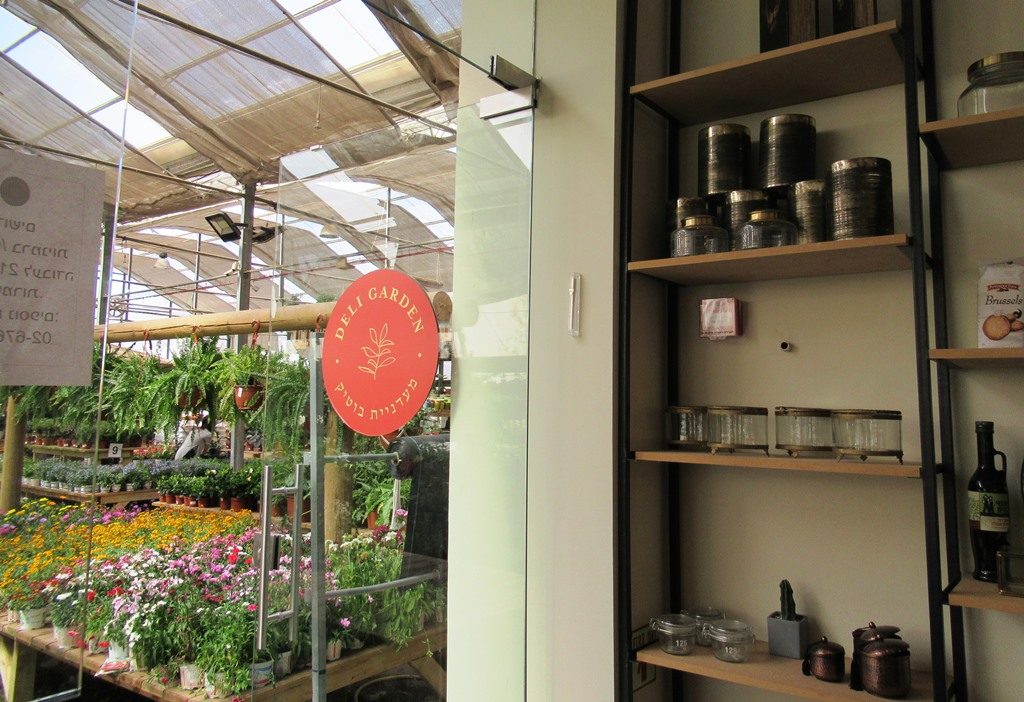 There is a new restaurant near the Jerusalem Botanical Gardens. 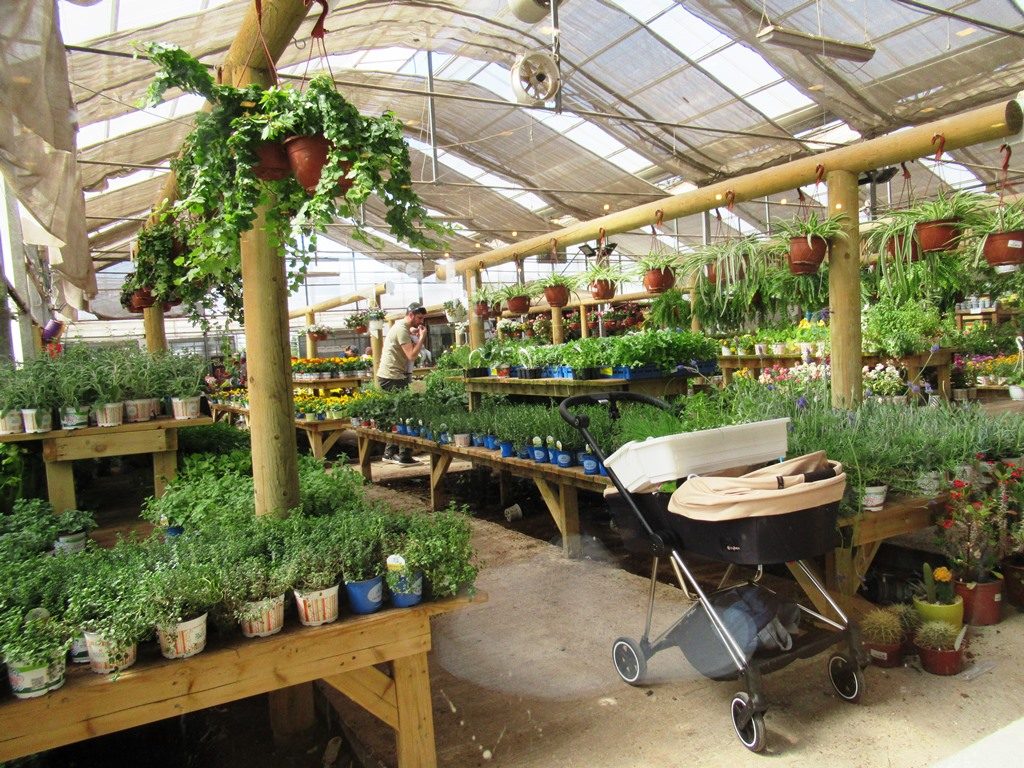 Next to it is a plant nursery, so glad we went before all the restaurants were forced to close this week and only offer takeout or delivery. 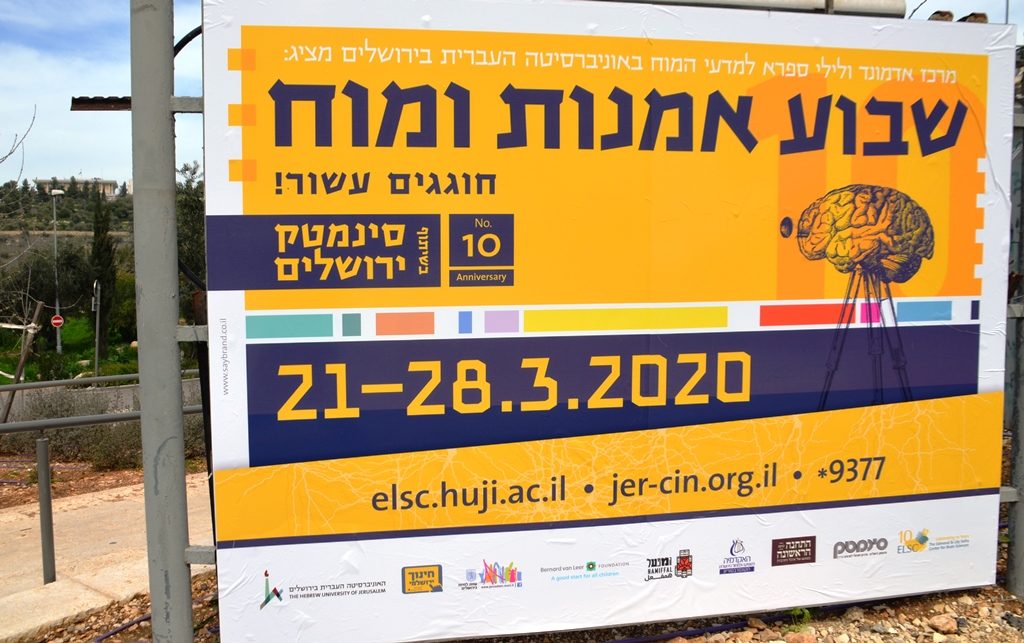 Big signs have been posted, but theaters are closed, so the annual Art and Brain Week March 21-28 at Cinematheque with Hebrew University Brain Studies will not be presented as usual. 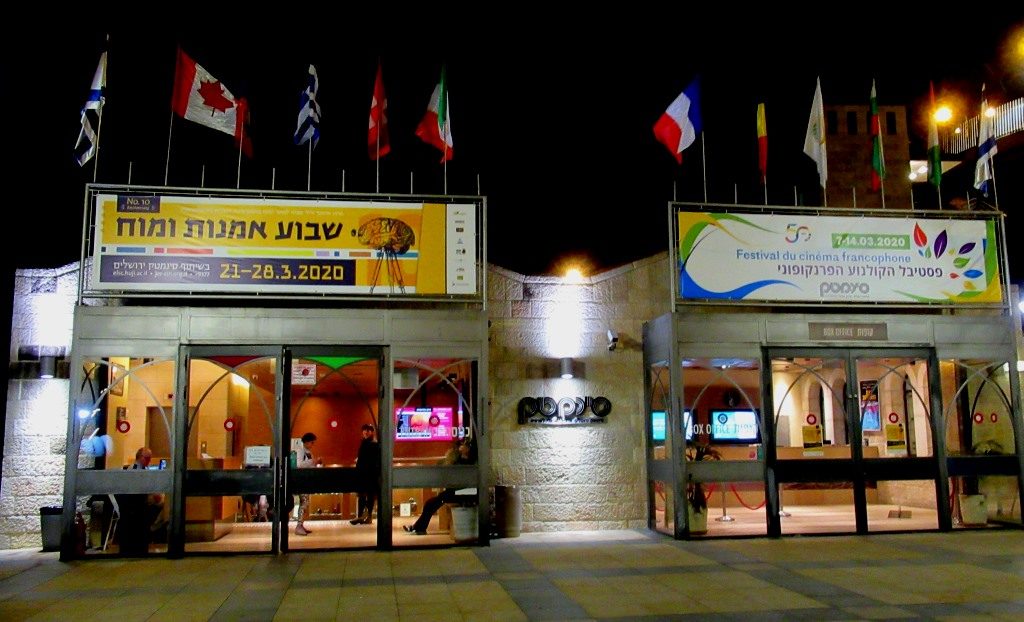 The French Film Festival was also at the Cinematheque.

Memorial ceremonies in April, at the Kotel and Har Herzl, will not proceed with the large audiences. We saw the event set-up already under construction. Last week we wondered how families would get to graves as usual on Yom HaZikaron, Memorial Day for Fallen Soldiers and Victims of Terror, as the cemetery was undergoing a major renovation. Now this annual huge gathering was announced not to happen. 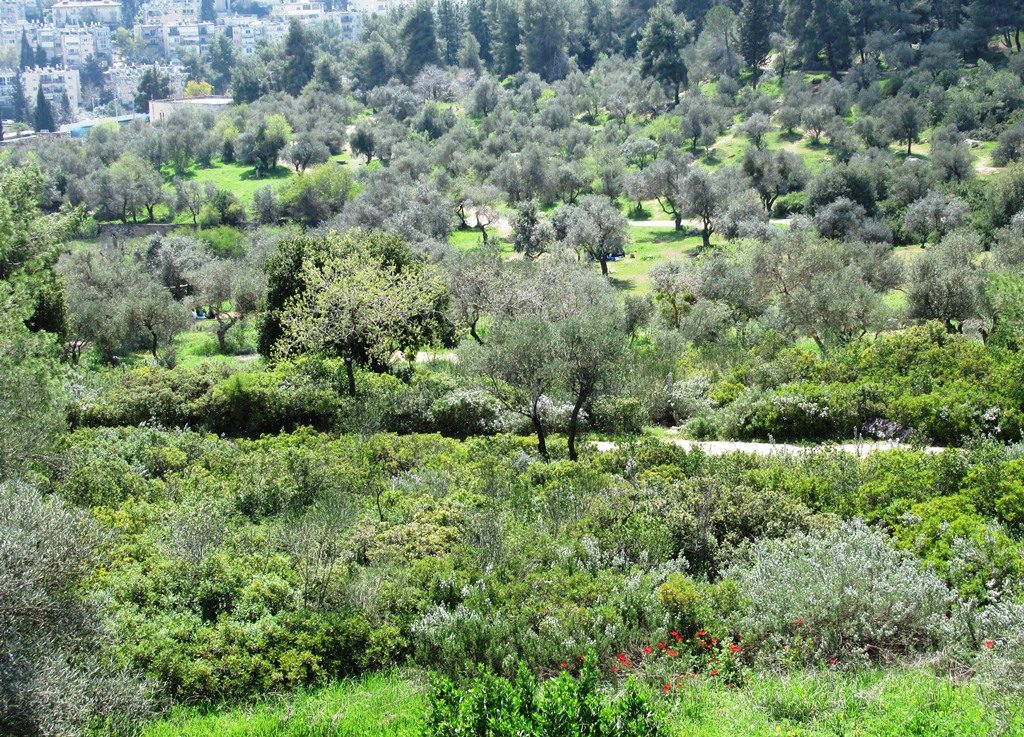 The hills and valleys of Jerusalem were alive with the sounds of children’s voices. 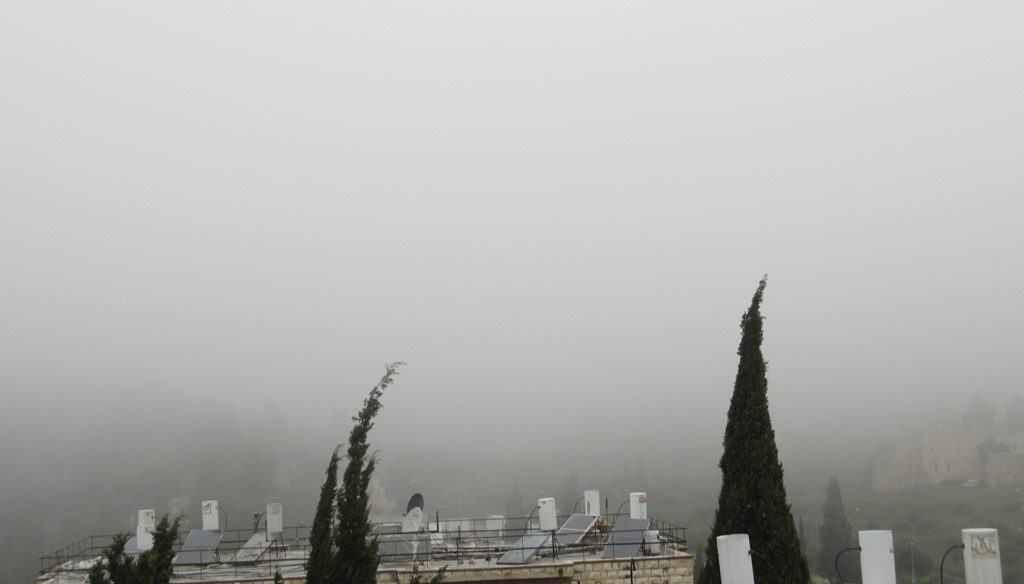 Now the stormy weather and increased measures will keep children inside.

Plus increased warnings will keep children also away from older relatives.

Israelis who were at the AIPAC conference in the US came home to isolation.

And, I want to leave you with a positive image. 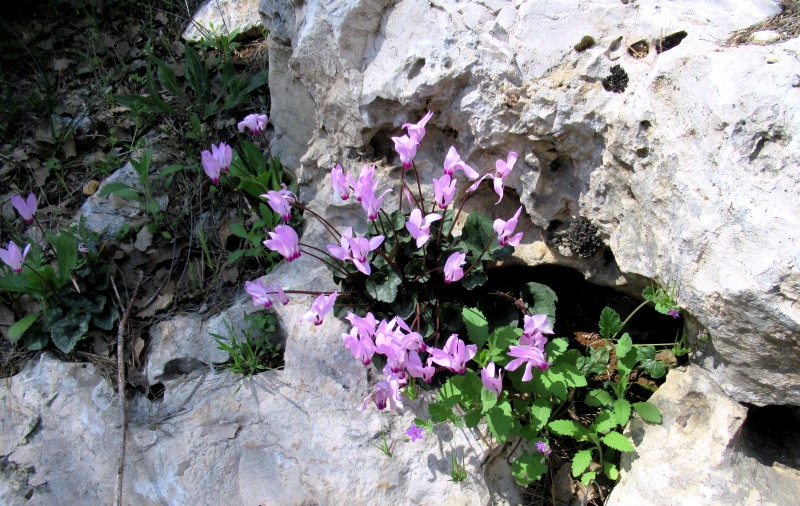 As every year, the flowers have burst forth through the ancient Jerusalem stones.

Construction work has not halted.

Work is set to continue under new regulations.

Much more will be happening on the Jerusalem streets.