Oh, what a week in Jerusalem, Israel!

A new survey stated that 57% of the Israeli public is unhappy with their existing work-life balance.

However, in response to various initiatives to shorten the workweek in Israel, 62% of the employees prefer leaving the situation as is – vacation on Friday and working on Sunday.

Wonder what the results of a survey asking about having three elections in a year would be? 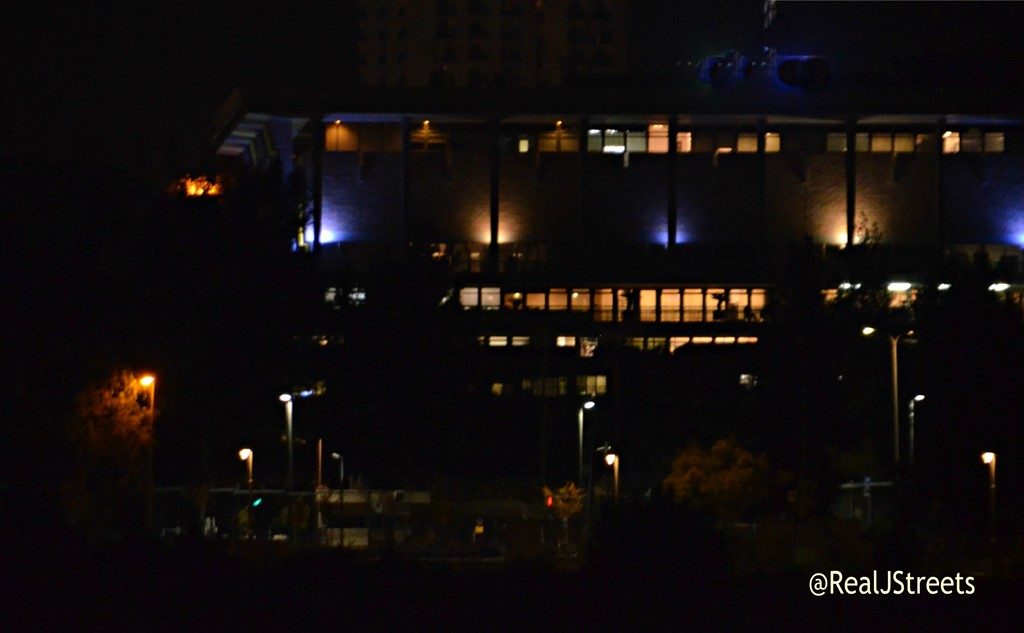 The lights of the Knesset were burning brightly Wednesday after midnight, as another government fell. Or did never get started? 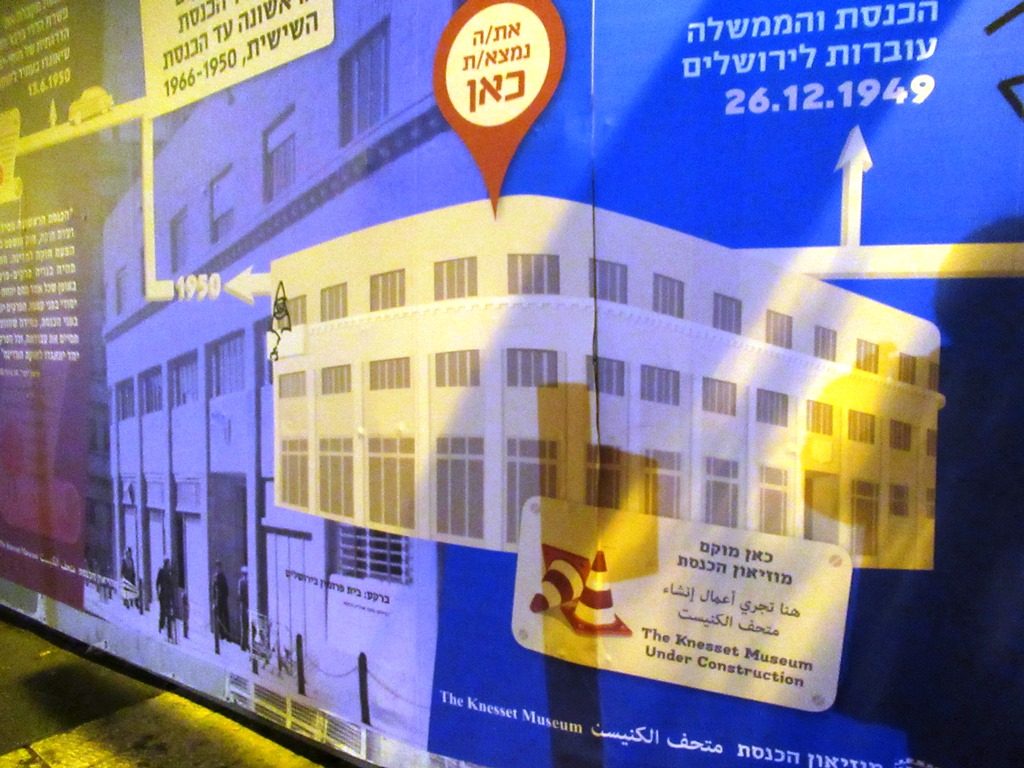 The only thing taking more time is the future Knesset Museum. Though it appears little is happening inside, the outside got a new construction fence. 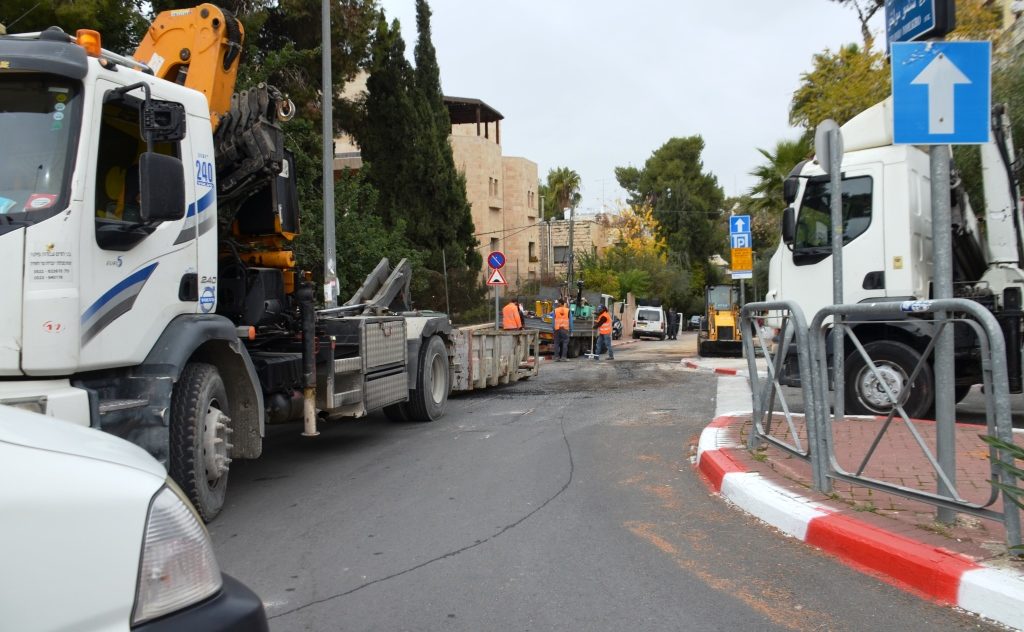 Construction seems to be everywhere, with streets and sidewalks closed.

One never knows when traffic will come to a stop or when you will have to walk in the street.

Road work and street closings seem to pop up as often as pre-holiday sales. 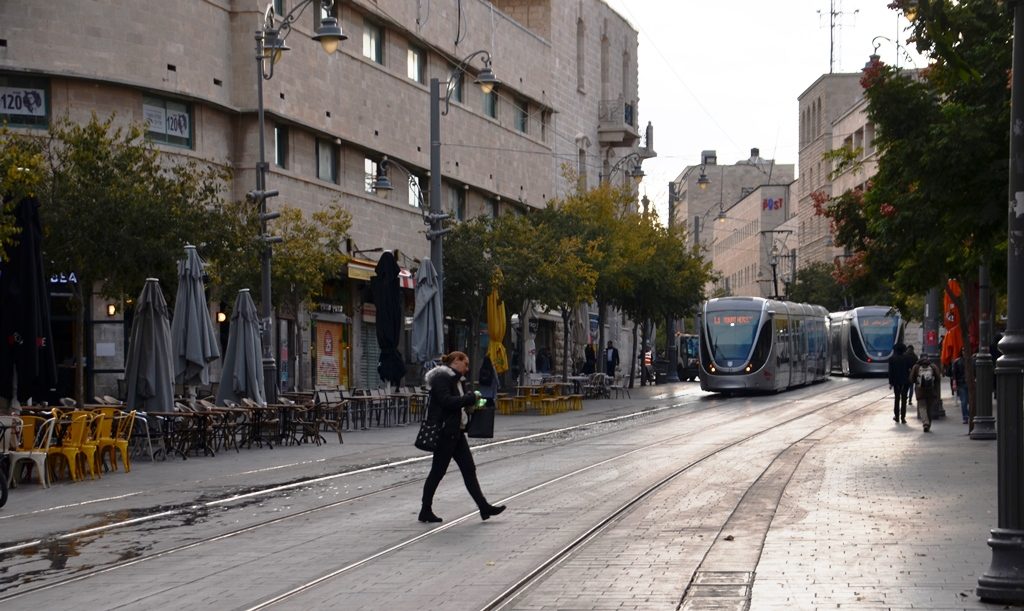 It is winter. Even Jaffa Road starts slowly on cold mornings. 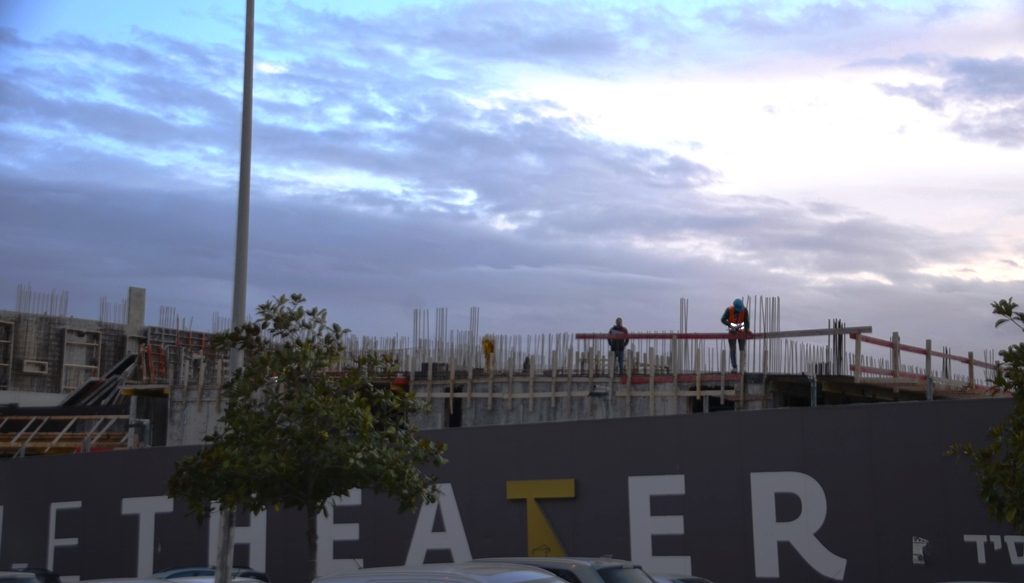 With the short winter days, construction goes on as the sun sets.

Jerusalem is getting a new look.

New signs for a pretty Jerusalem are displayed on the garbage trucks. 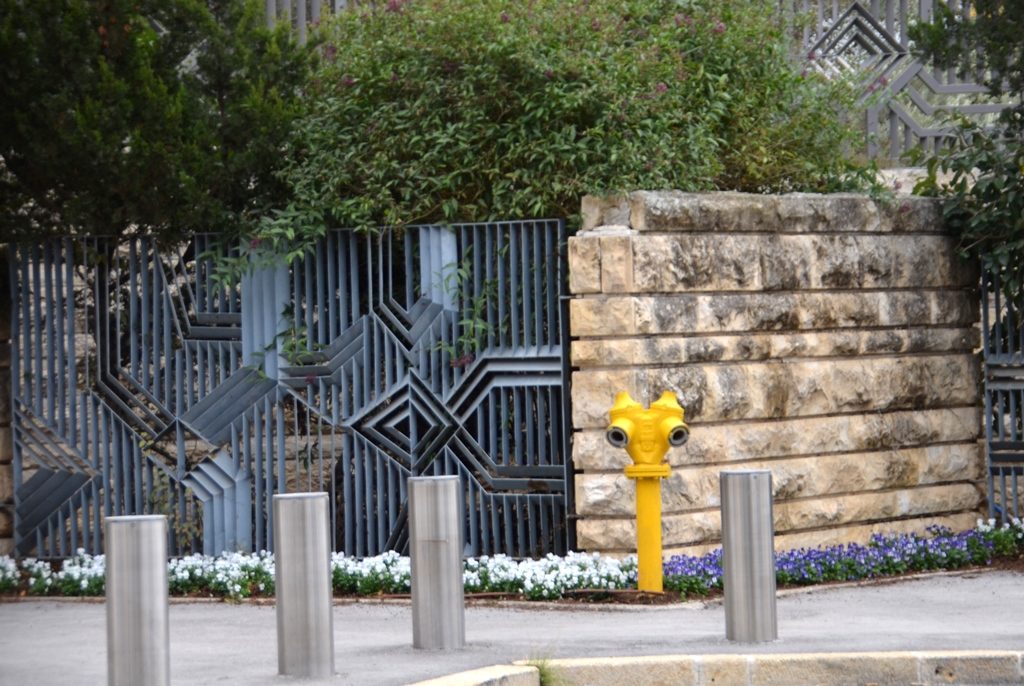 Fire hydrants got a fresh coat of paint. 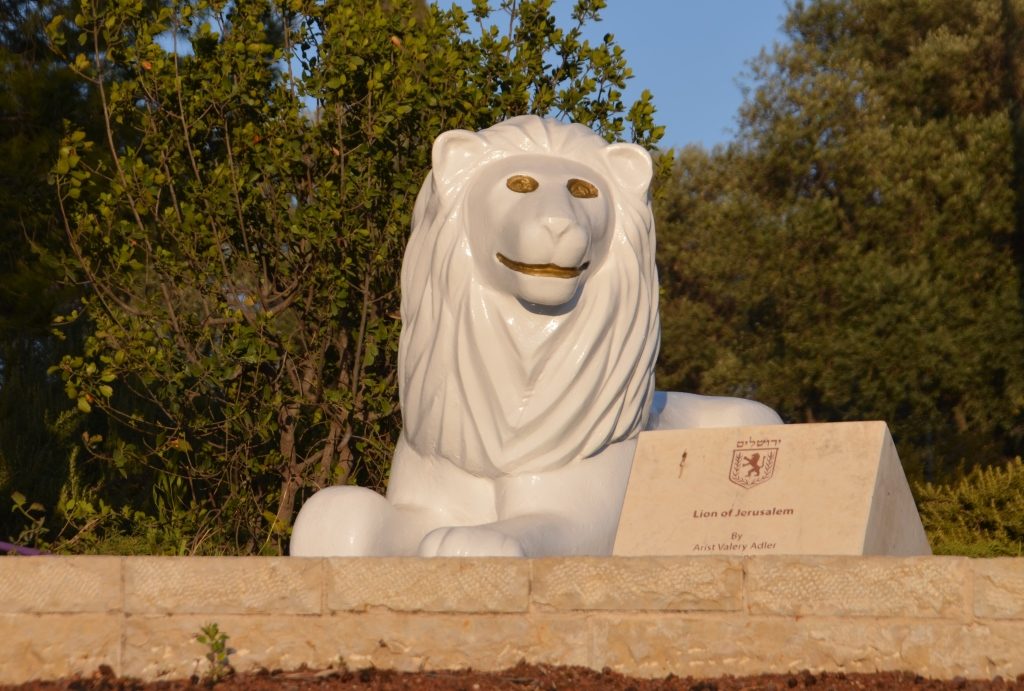 The Lion of Jerusalem looked freshly painted and regal over the empty flower bed across from Liberty Bell Park near the Montefiore Windmill. 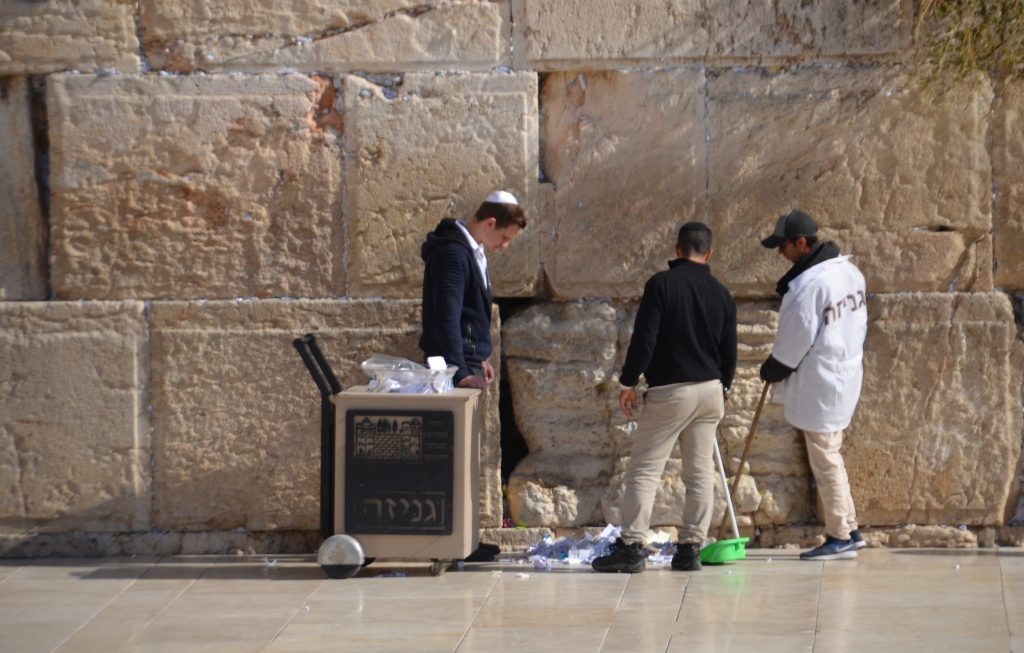 Record numbers of tourists in Jerusalem and visitors to Kotel, the Western Wall, means more notes to remove before the holiday crowds next week. 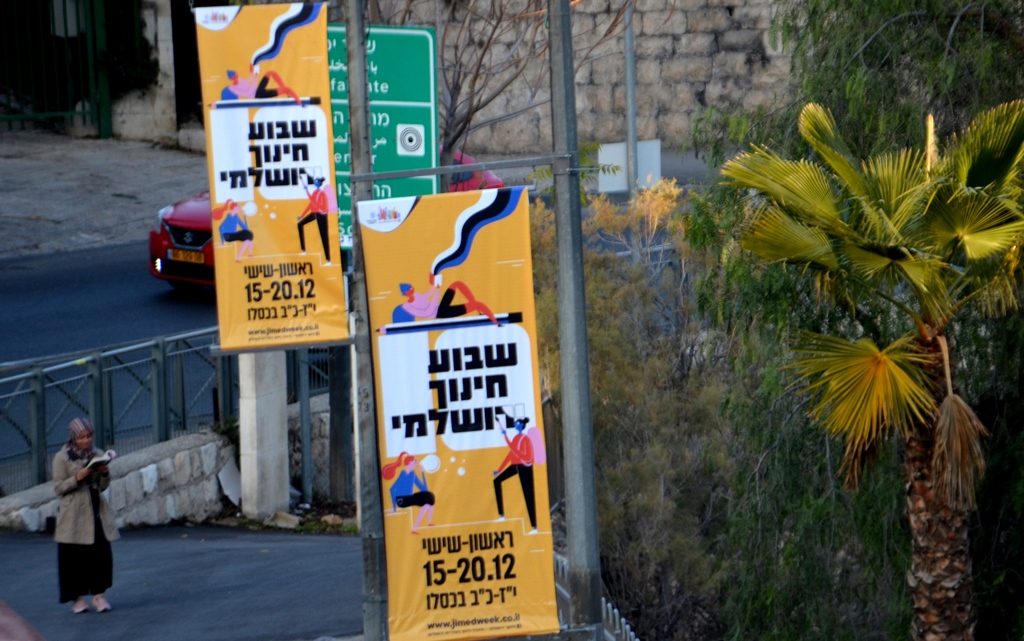 It’s Jerusalem Education Week from December 15 -20. The opening event was held at the Jerusalem Cinematheque with the Mayor and Education Minister attending.

However, though I planned to go, I skipped that one. 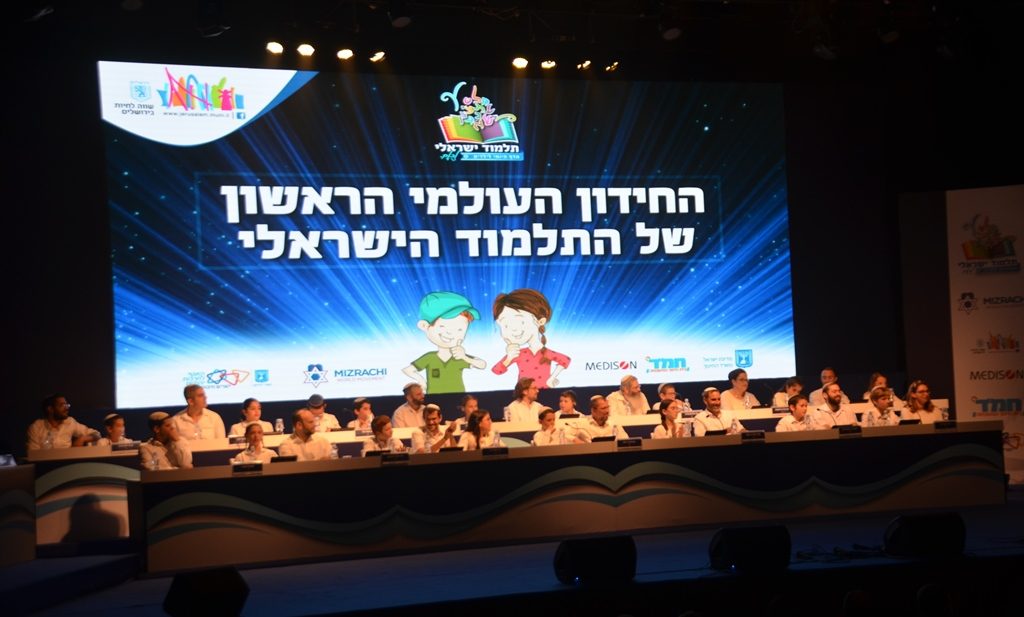 From over 1000 participants, the final round winners posed with Education Minister Rav Rafi Peretz. 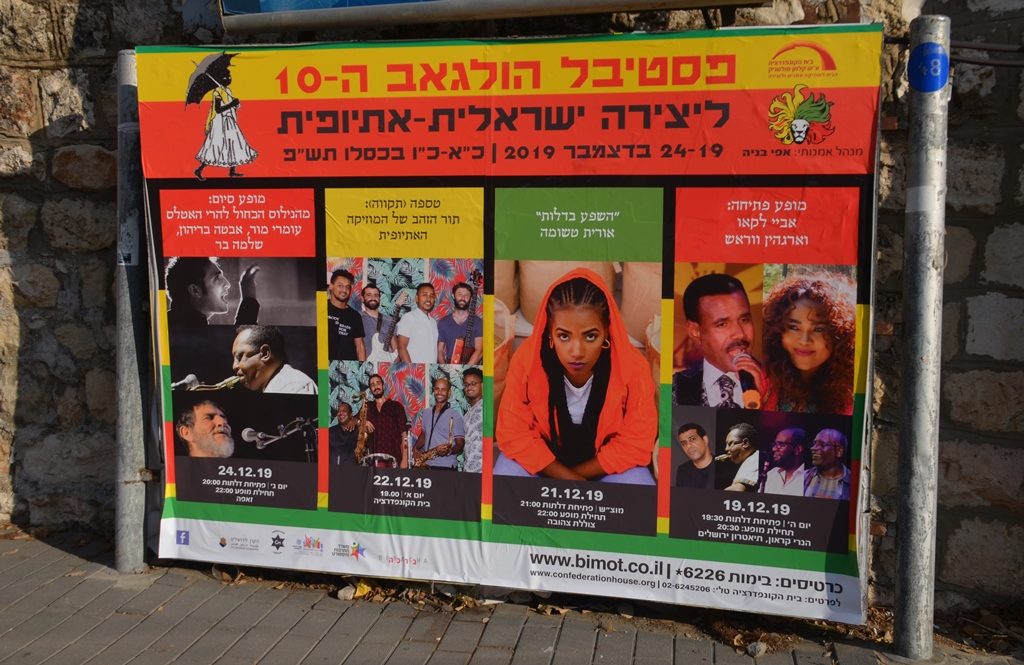 The 10th Hullegeb Festival Jerusalem is at the Jerusalem Theater and other locations from December 19-24. Ethiopian Music from the “golden age” to hip hop is to be featured. 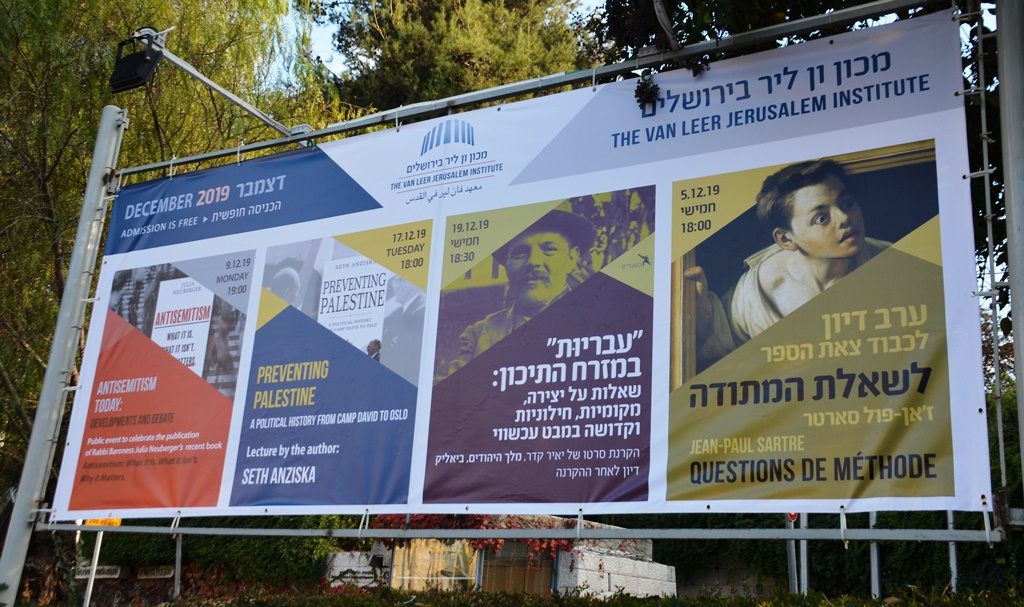 The Jerusalem Van Leer Institute has a full program for December.

The 21st Jewish Film Festival is on from Dec 19-26 at the Jerusalem Cinematheque.

The International Chess championships are at the Notre Dame Center. 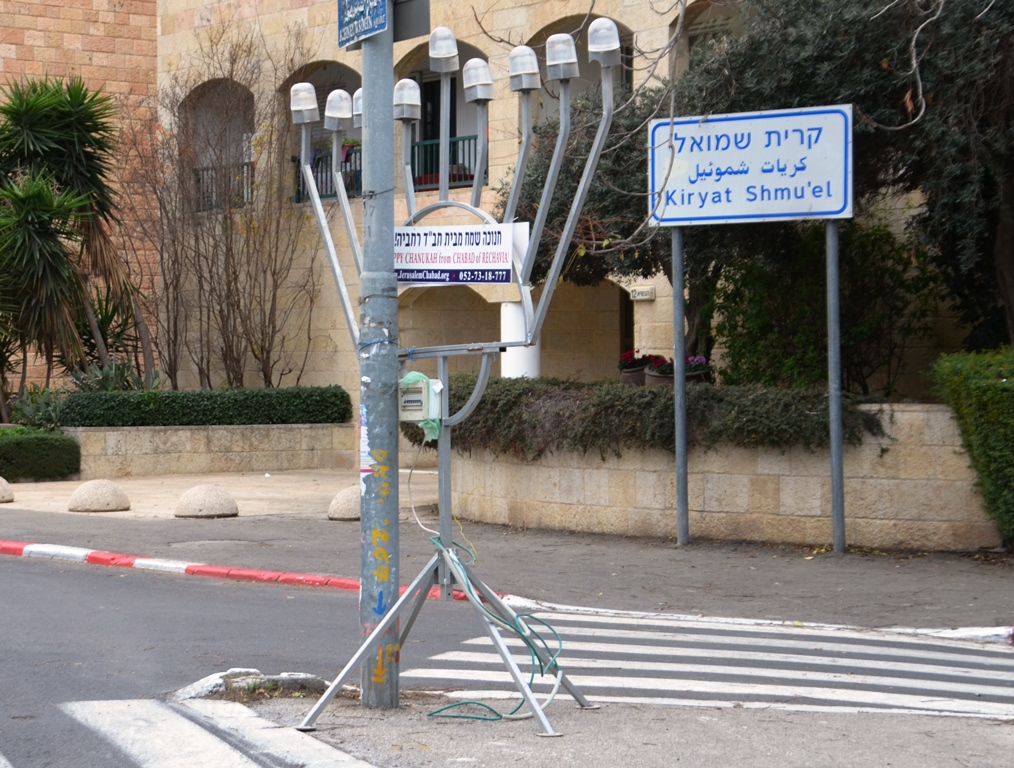 It’s official. The winter holiday season has begun – the first Habad Hanukia popped up on a street corner. 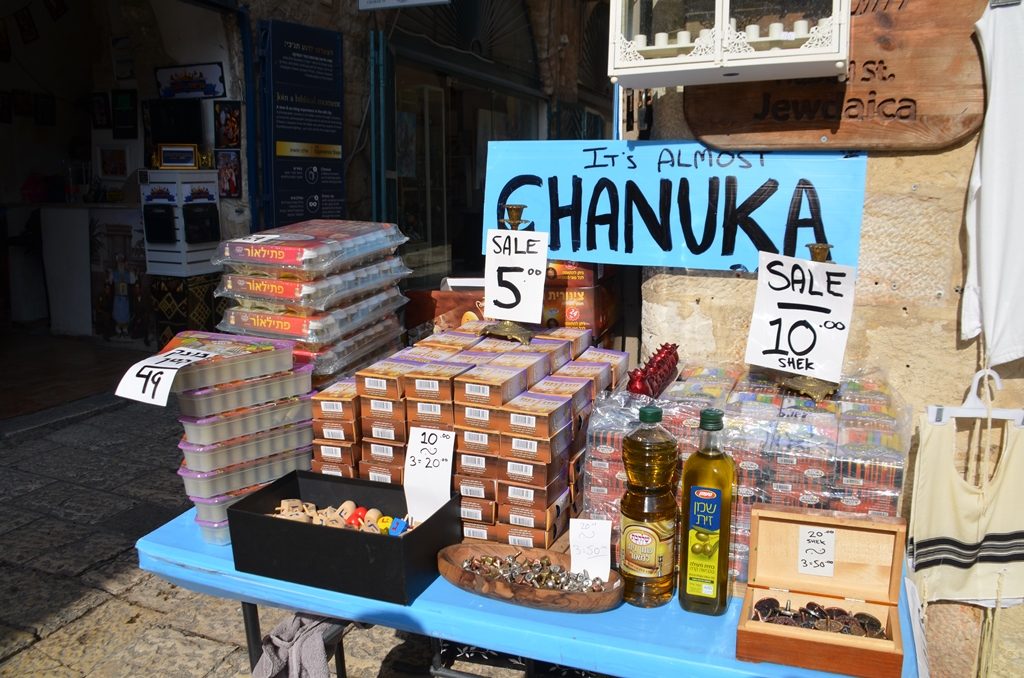 It’s almost Hanukkah – however you want to spell it this year. 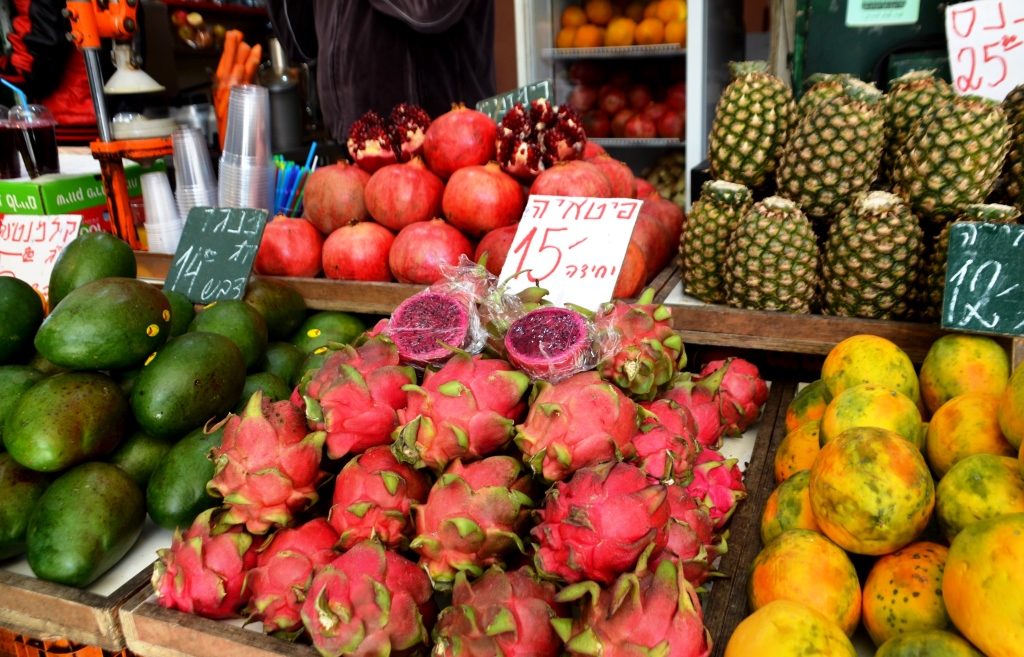 Fruits in the Machane Yehudah Market, the shuk are plentiful and colorful.

American style donuts are out along with traditional Israeli ones

One way to burn off some of the holiday food calories is the Jerusalem Crossroads 6th annual Night Run, which is set for December 26. 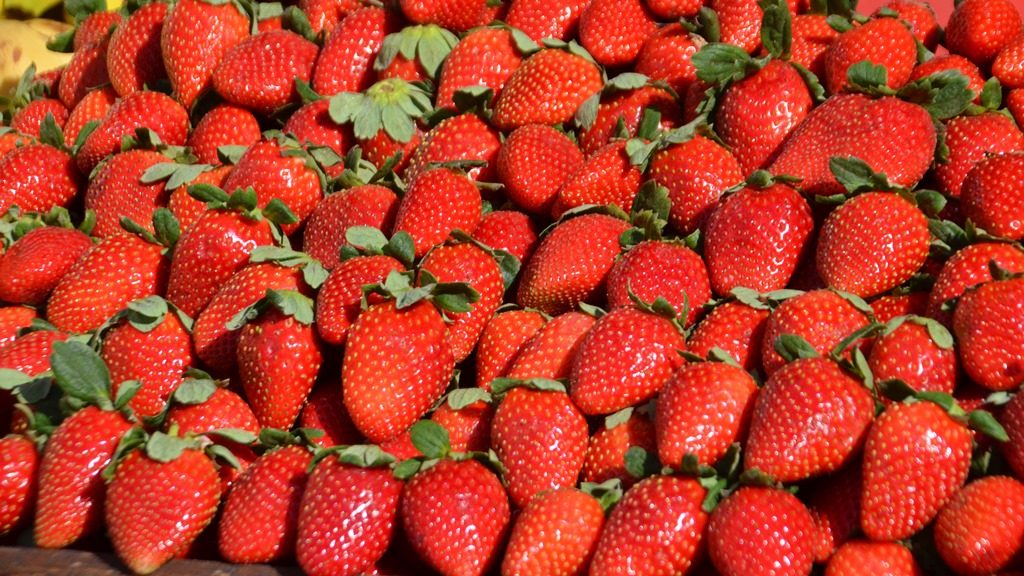 And a favorite in Jerusalem for winter – strawberries are piled up in the shuk.

This snowman was looking rather sad and worn.

But the YMCA is decorated for a month of holidays. 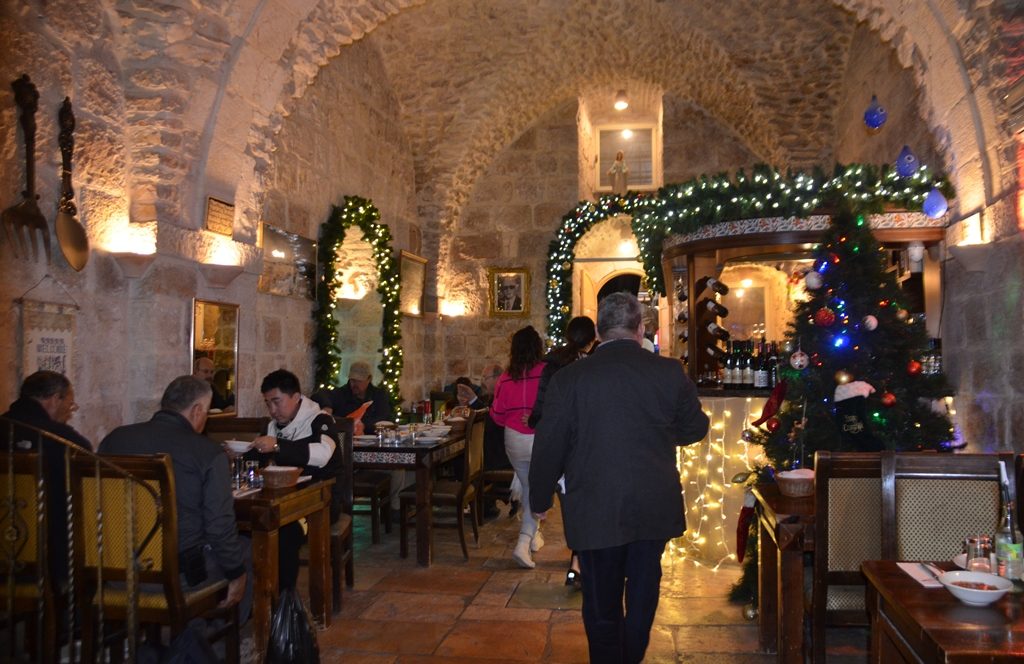 In an Old City Armenian Quarter restaurant, the lights burn brightly all day.

And holiday lights will line the Jerusalem streets.

The list of events, tours and Hanukkah holiday lights of the nights – too long for now. 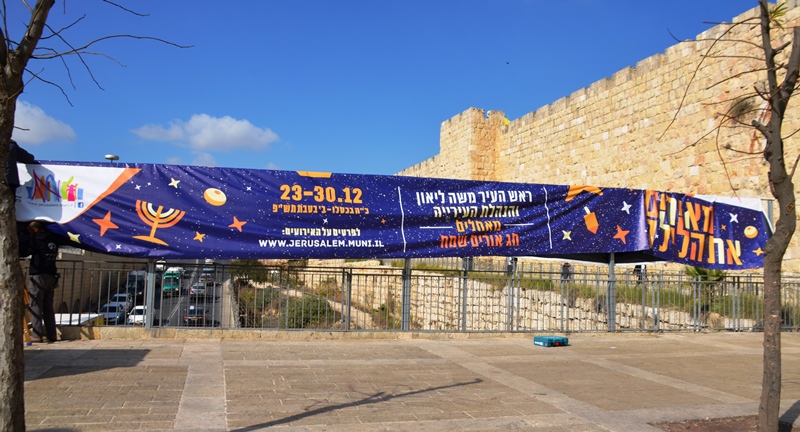 4 thoughts on “Winter and Holiday Lights in Jerusalem”