At first, I said no.

I had been on trips to the Shomron (Samaria) in the past.

The schedule seemed similar to previous visits to the Shomron and Barkan.

However, on Sunday morning, as the Jerusalem, Israel skies turned grey, 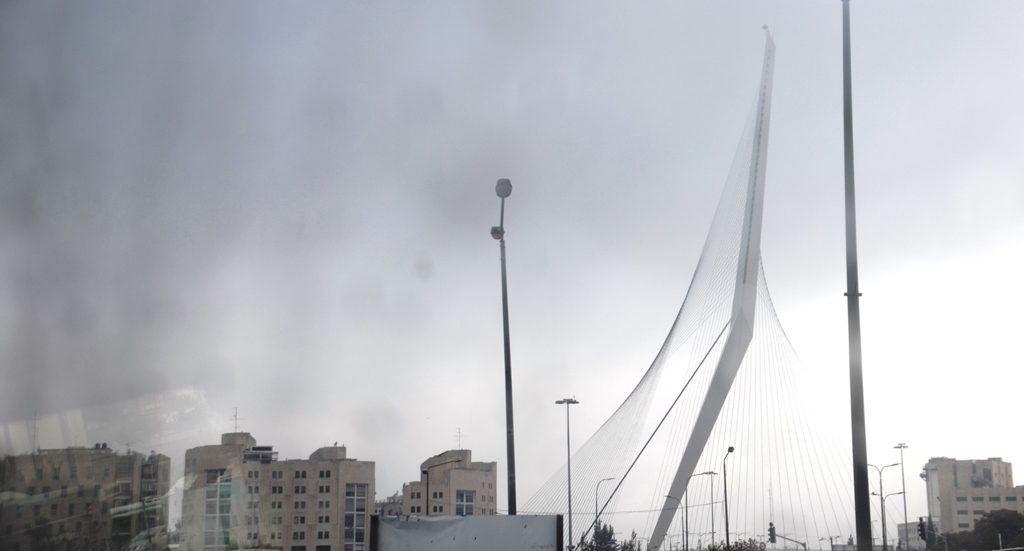 and come down long and hard on the very dry Jerusalem streets. 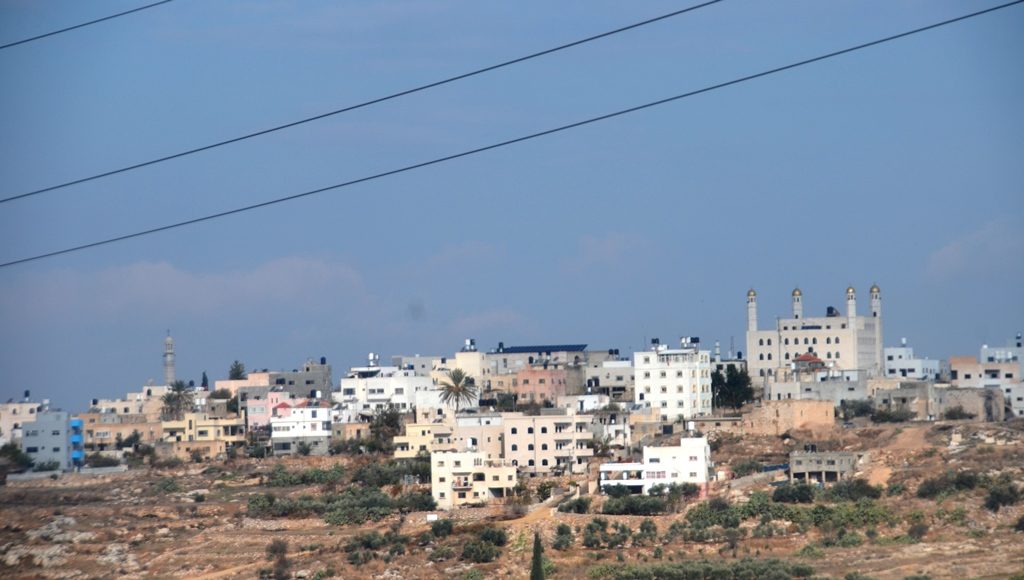 As we drove away from Jerusalem, the morning sky was blue and clear.

Clouds gathered as we neared the Barkan Industrial Park in the Shomron.

The view from the road to Barkan of Ariel Industrial Park was as impressive as ever.   The development and growth in the once-barren hills is amazing. 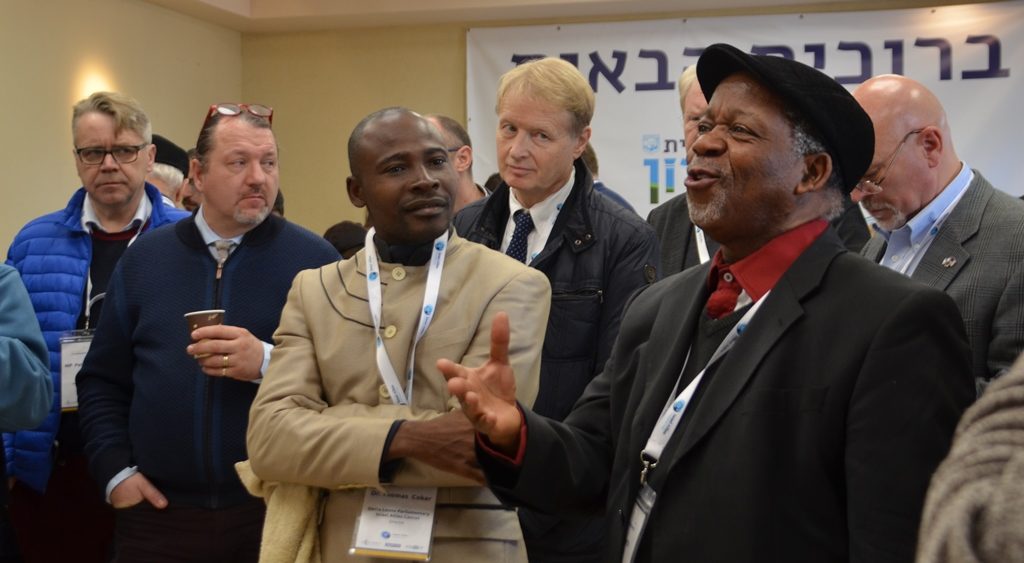 Stop #1 in the Barkan included greetings from the Shomron Council officials to the Israel Allies international parliamentarians.  These supporters of Israel had come from around the world. 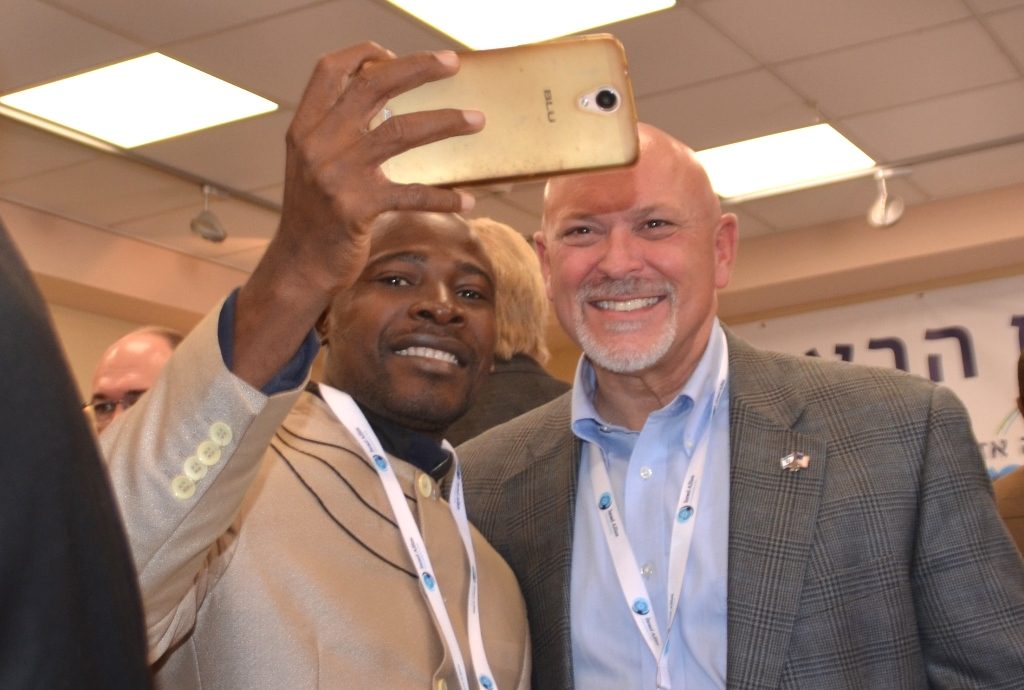 I have an entire album of selfies.  Dr. Thomas Coker of Sierre Leone taking a photo with Alan Clemmons of South Carolina has to be the new favorite.

Full disclosure – one of the main reasons I decided to go was to meet Facebook friend Rep. Alan Clemmons who initiated the first US anti-BDS legislation in South Carolina. Over half the US states now have similar laws against Israeli boycotts. 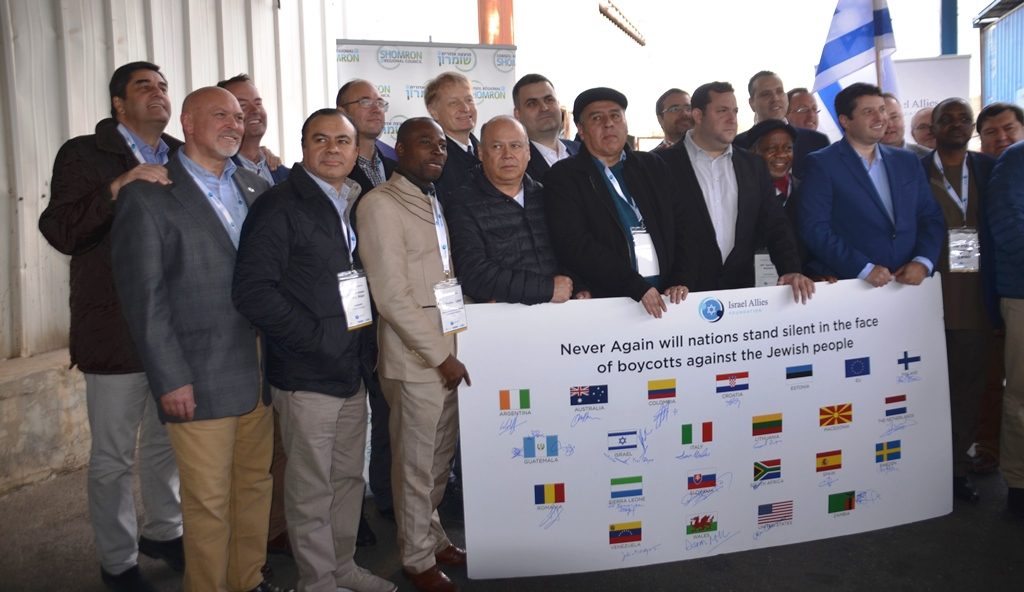 “Never Again will nations stand silent in the face of boycotts against the Jewish people,” stated this declaration signed by the international group of 25 ministers and parliamentarians. 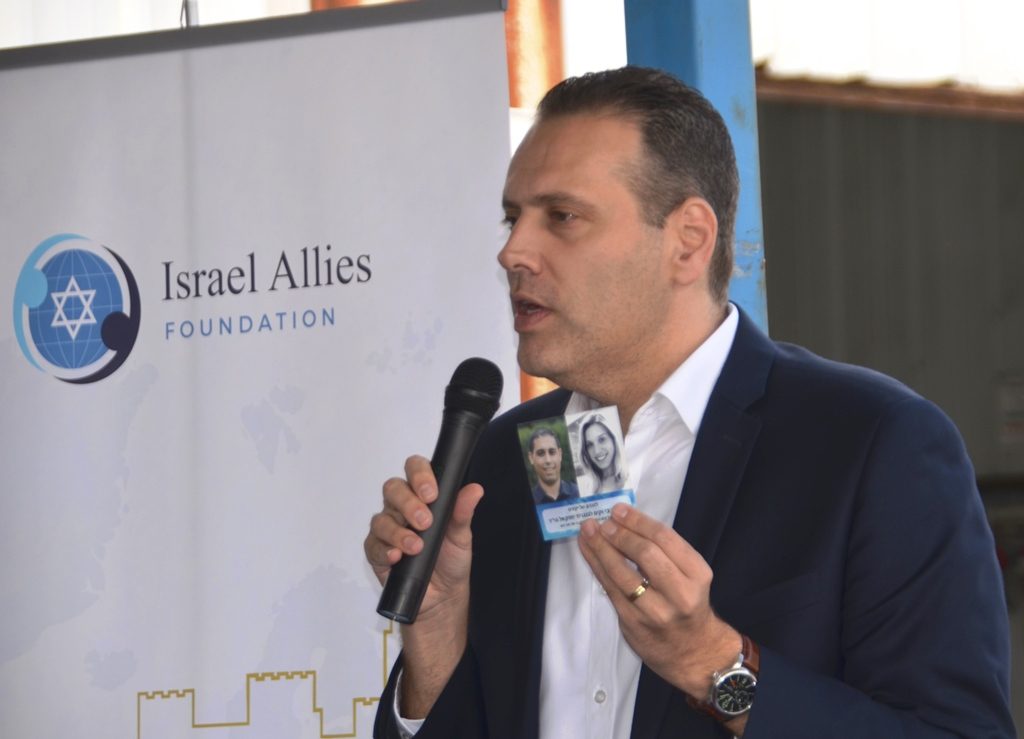 MK Miki Zohar held up a photo of Kim Levengrond Yehezkel z”l  and Ziv Hajbi z”l as he addressed the delegation. The signing and speeches were held in the parking lot of the Twitoplast factory.

In October last year, this workplace of coexistence, that I had written about more than once, was the shocking scene of terror when the two young parents were murdered. 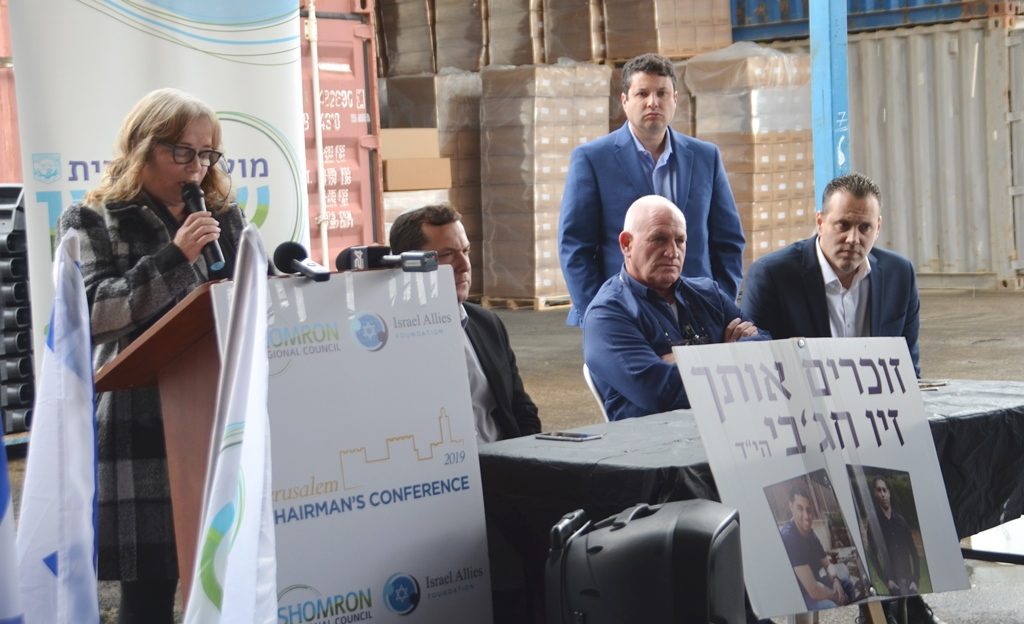 Ziv’s mother spoke as did Kim’s father (seated in center). Both asked the international lawmakers to get their governments to stop funding terror. Standing is IAF President Josh Reinstein, and sitting next to the podium is Yossi Dagan of Shomron Council. 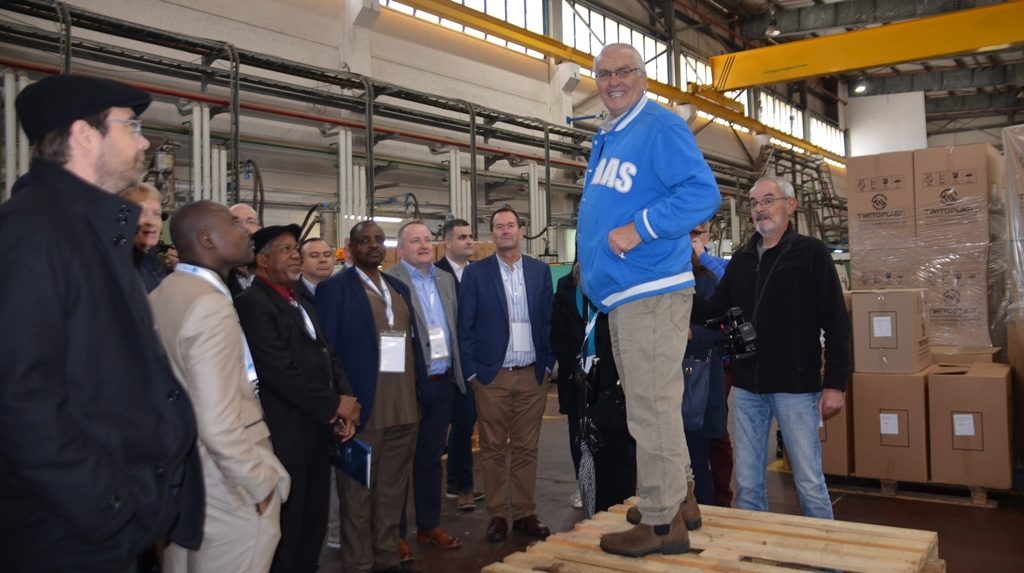 No trip to the Barkan is complete without Moshe Lev Ran, who spoke to the international visitors in the Twitoplast factory.

Moshe’s smile and message were not new.

As I have shared in the past, these factories in the Shomron employ thousands of Arab workers. Work in these Jewish businesses means higher salaries and benefits than under PA.   If an Israel business is forced to close from the EU labeling restrictions and boycott, those hurt most are the families of the Arab employees. 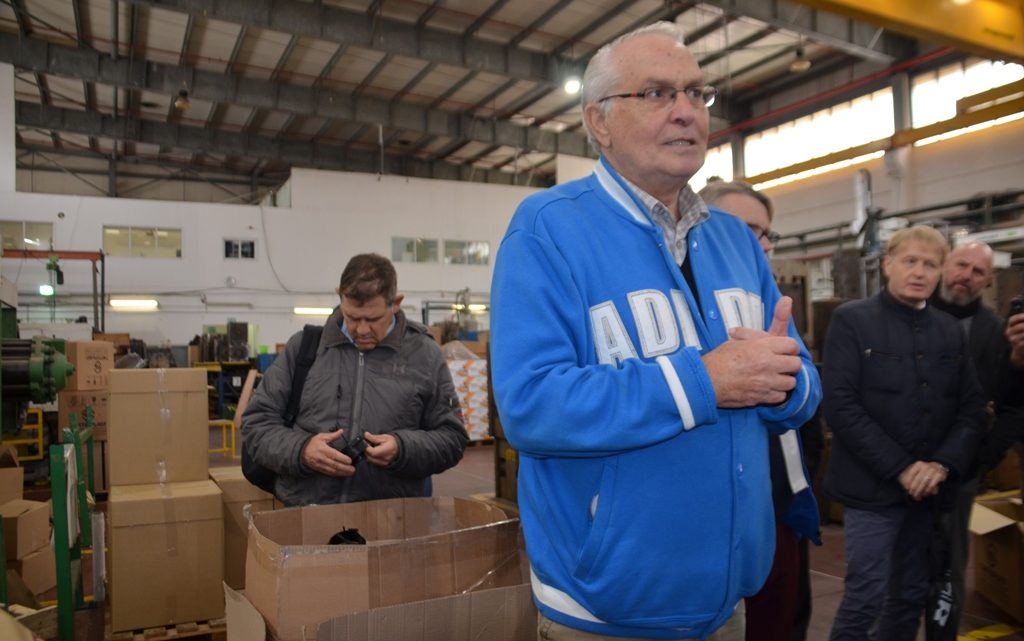 Each time I go to the factory there seem to be more products.

Israel Twito, the creative genius behind Twitoplast, has over 100 patents. 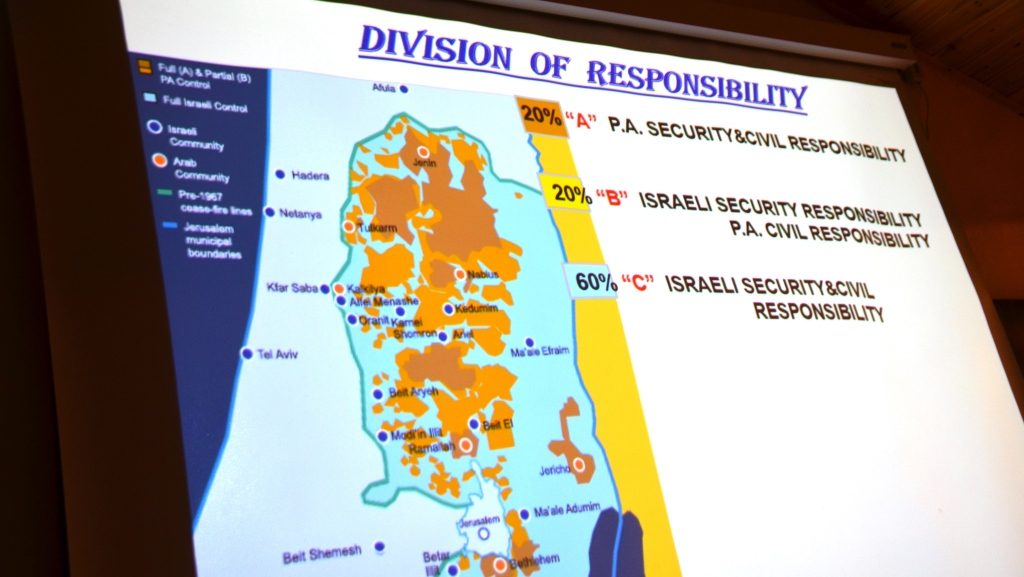 This graphic makes the areas A, B, C, clearer than if I tried to explain the complex situation of governance in Yehudah and Shomron. 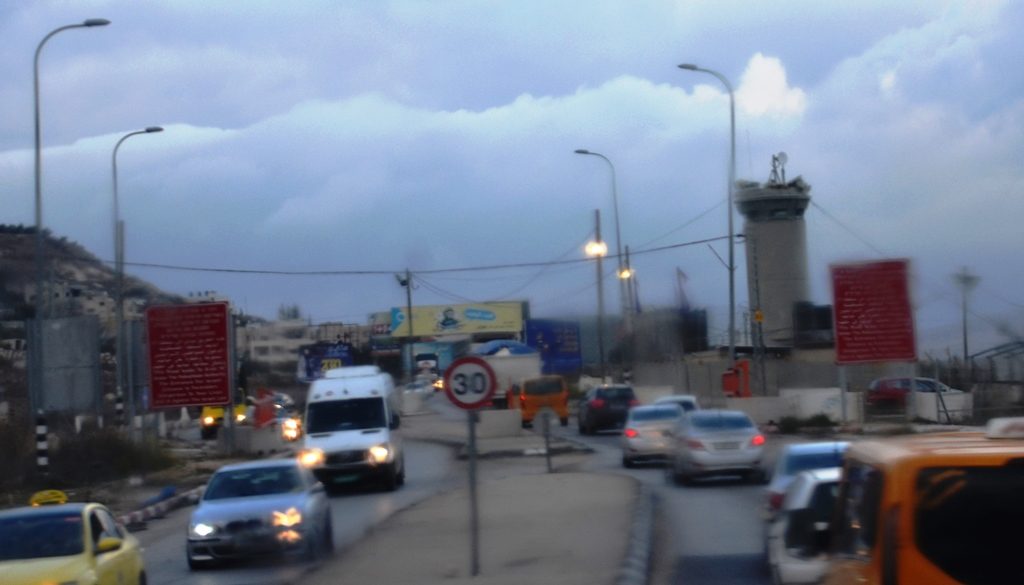 Roads in the Shomron in area “A” have red signs not allowing Israelis to enter.

As you can see the weather had changed by the time we left Barkan. 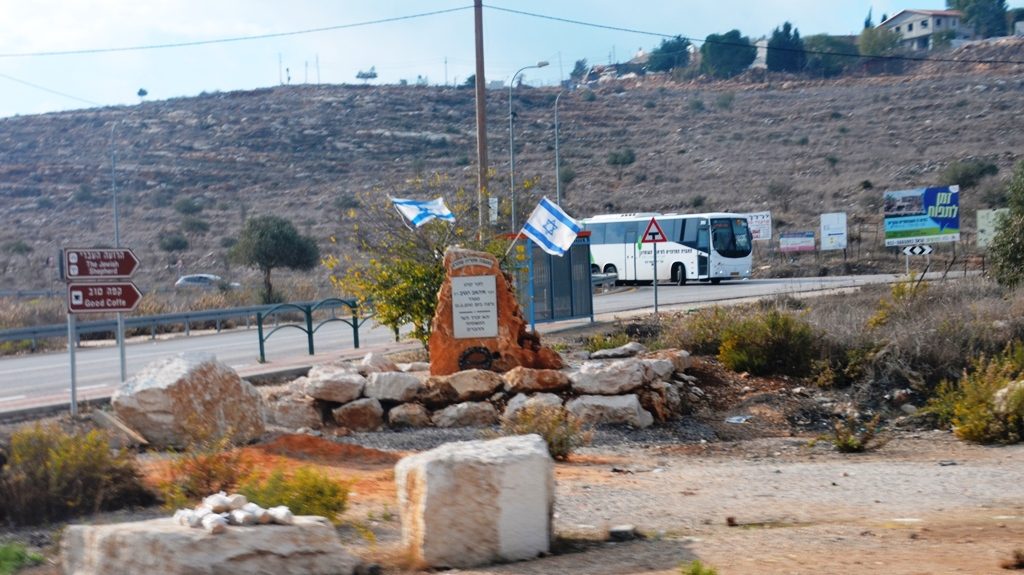 The memorials of terror victims are along the road near intersections. 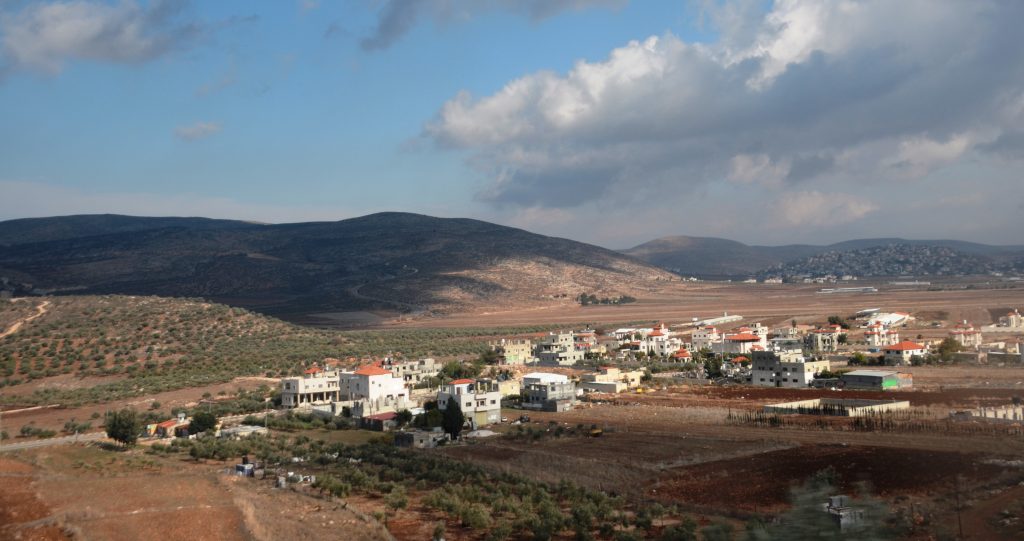 Villages in the valley sit between the rolling hills that line the road.

New housing on the hilltops gets more impressive with each visit.

Stop #2 was also a repeat and as expected the Kabir Winery lunch was excellent. 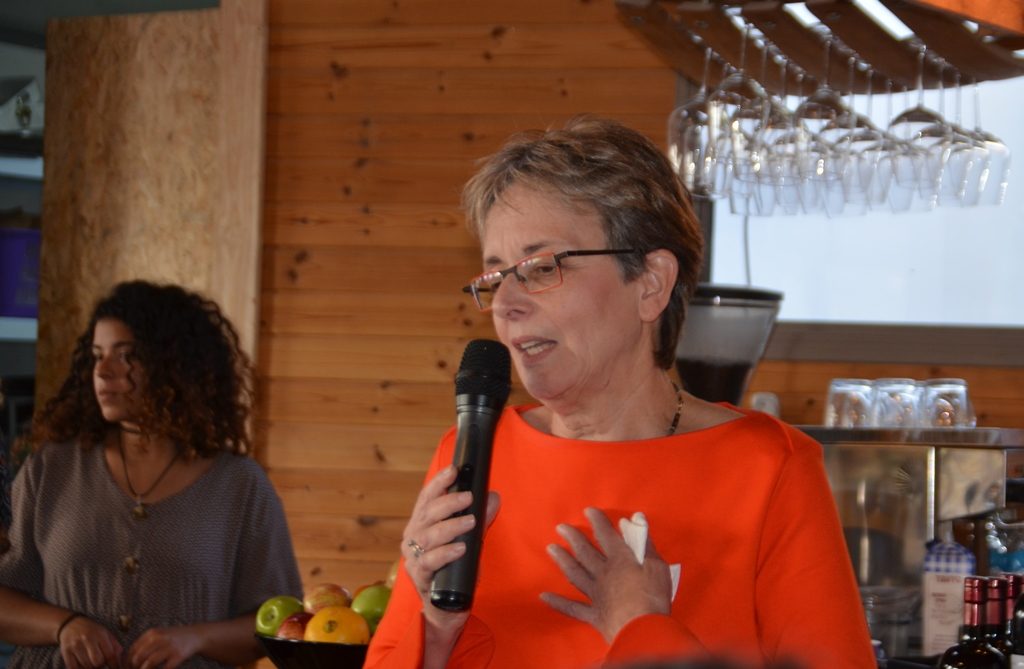 The second reason I decided to go was that Leah Goldin, mother of Hadar Goldin z”l, was to speak after lunch.  For 5 years and 4 months, she has tried to get her son’s remains, held captive in Gaza by Hamas, returned to Israel for burial.

I was on a bus returning to Jerusalem from Soroka Hosptial in Beer Sheva after the supposed 2014 ceasefire. Rockets were still being fired, and we could see the Iron Dome at work.

Hamas killed and captured Hadar two hours after the “cease-fire” began- a war crime and against humanitarian rules of conduct. Goldin wanted to make the legislators aware and urged them to help in their home countries. 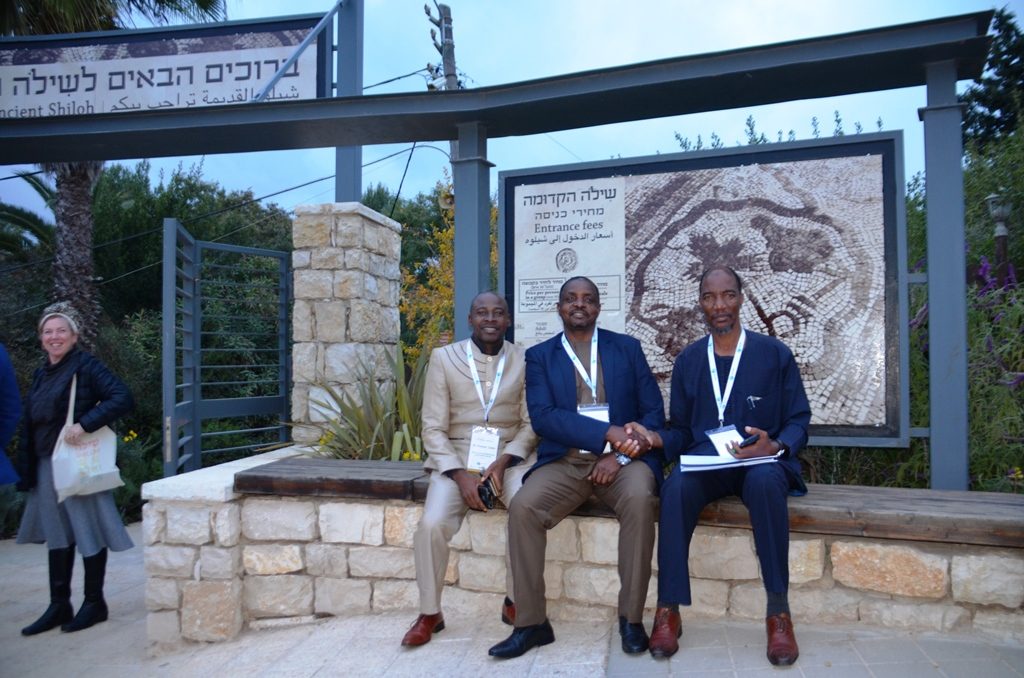 This was done very quickly as the sun was setting soon. 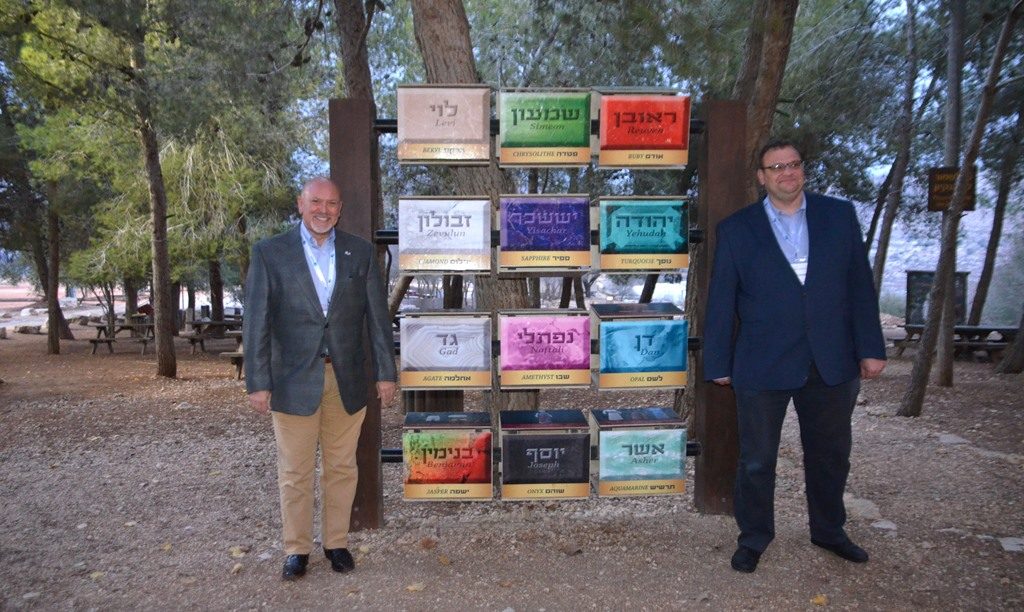 Minutes after this it started to rain. 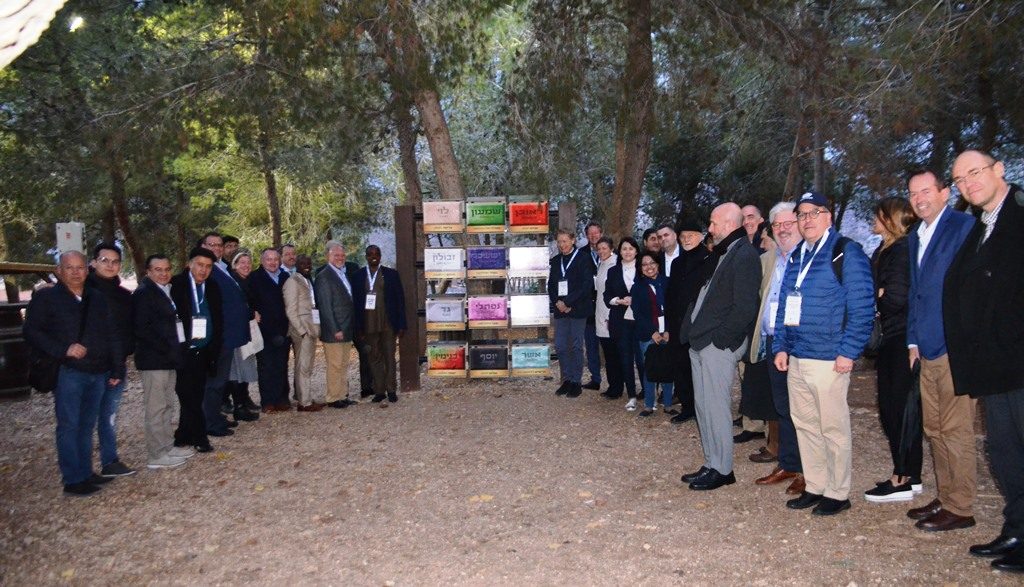 Very quickly the group posed for a photo next to the new colorful display of the Twelve Tribes.

I went prepared for the day with an umbrella and plastic bags, however, they were on the bus. 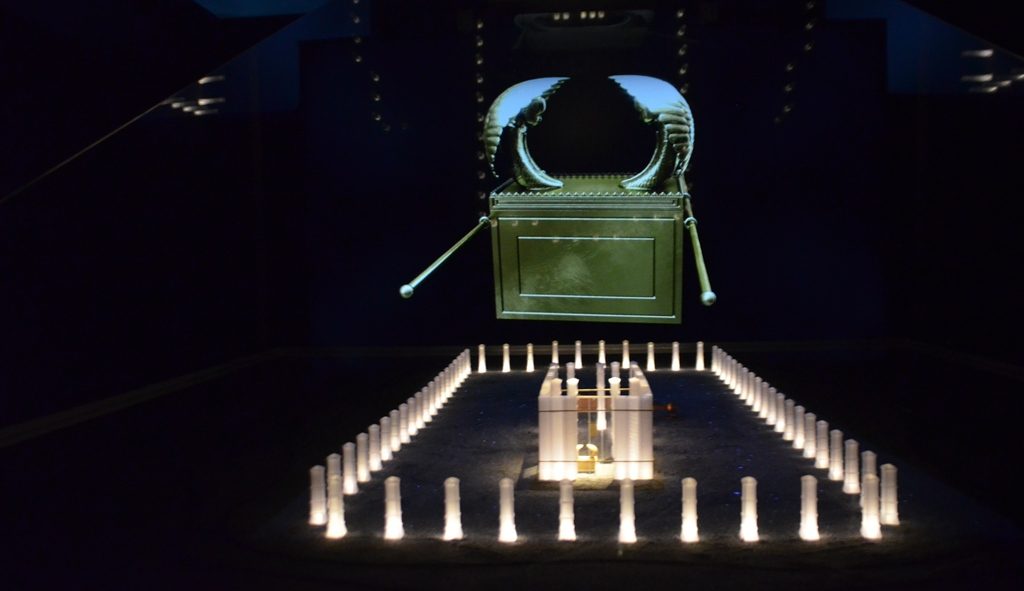 We ran up the hill in the dark and rain to shelter in the Shiloh hologram show of ancient Shiloh, and movie reenactment with actors.

For 369 years ancient Shiloh was the site of the Tabernacle before King Solomon built his temple in Jerusalem. You will have to come to see for yourself, as rainy nights are not the best conditions for photography.

Stop #4 was the Psagot Winery. 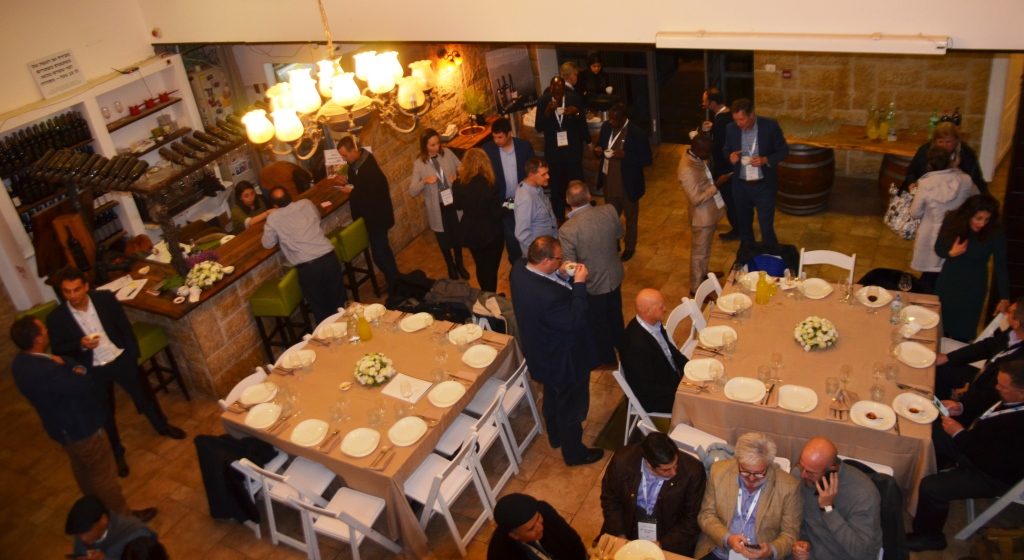 Another ride up a winding, narrow road to a mountain top, to the warmth of a fine restaurant. 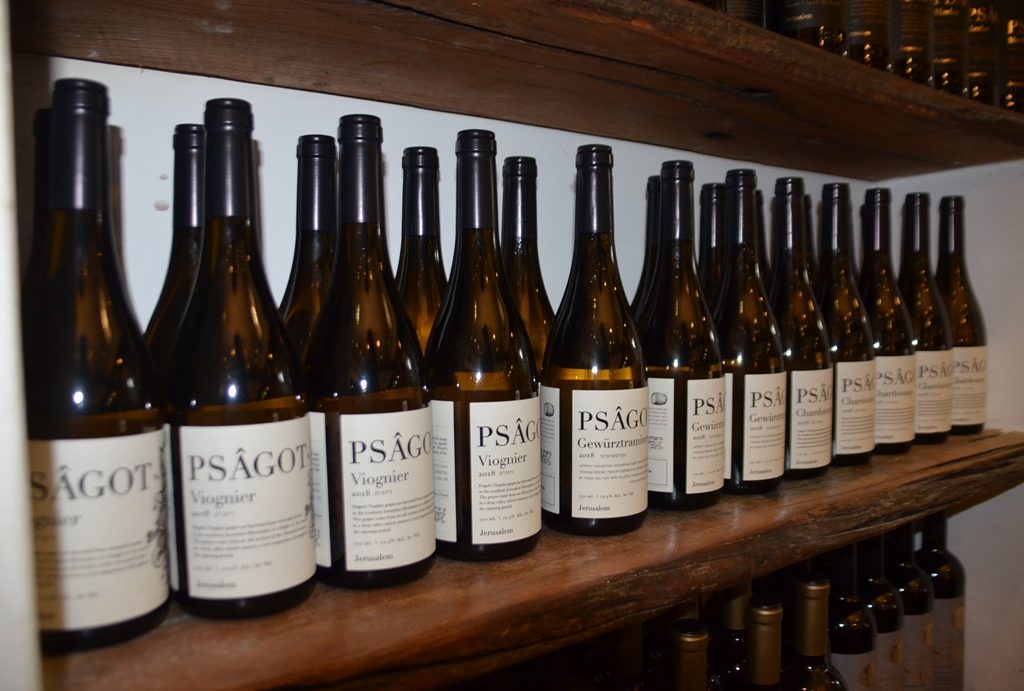 And wine. Good wine. Psagot owners went to the ICC international court to try and reverse the EU labeling against Jewish businesses in the Shomron. They lost, but they plan to keep trying. With 200 disputed territories in the world, they ask why only Jewish Israelis have to be singled out with special labeling?

Having been in the Shomron, it was good to see and hear the old and new.

Plenty was happening on the Jerusalem streets, besides heavy rain. 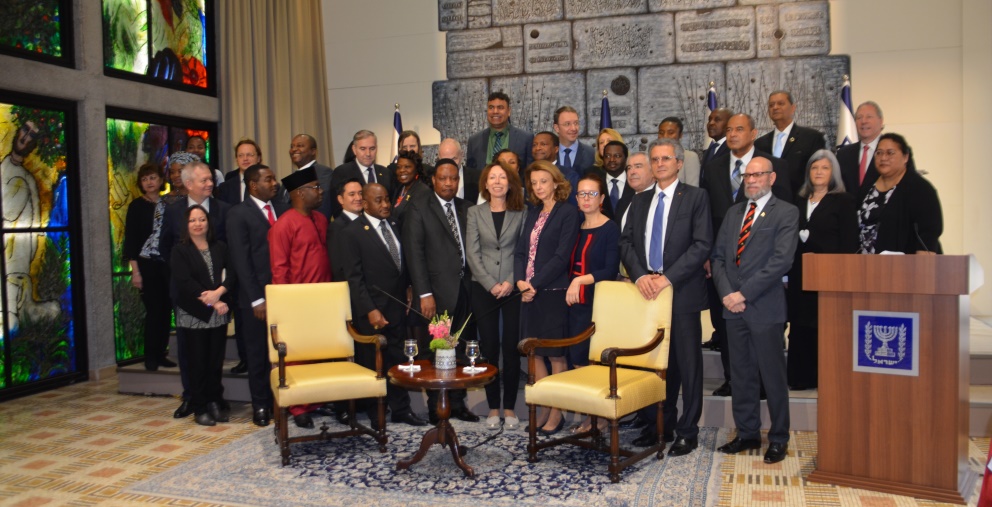 A tour of Ambassadors to the UN, led by Israeli UN Ambassador Danny Danon was at Beit Hanasi, the Israeli President’s House.

For most of the international diplomats, it was their first trip to Israel. 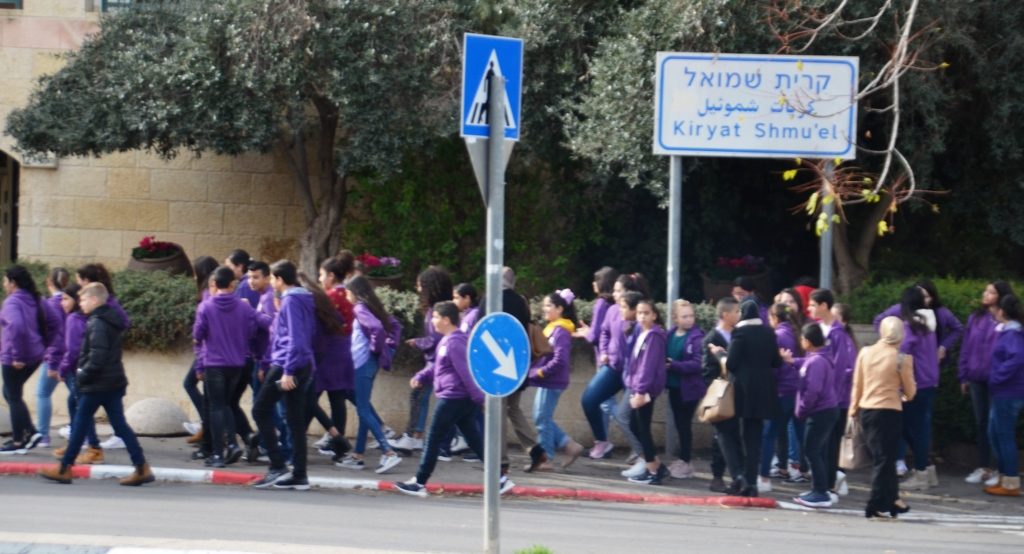 While they were in private discussions with President Rivlin, across the street, a group of Arab students was on their way to the Islamic Museum

More from Leah Goldin speaking about humanitarian and legal issues.

More from what’s happening in Jerusalem, Israel next time.

3 thoughts on “4 Stops in Shomron: See Old and New”