The holiday season has come and gone, though Israeli flags and colorful flowers can still be seen along the Jerusalem streets.

Like every year, this small decorated porch rates as a favorite sight.

The Shavuot holiday started as Shabbat ended, making it a two-day holiday celebration for many Israelis. But outside of Israel, it was 3 days long, so no complaints. This all-time favorite image is from a wall mural when the Jerusalem Cinema City when newly opened.

We moved last week. With too much to do, packing, sorting and tossing (can you believe the strap on this bag was so old it disintegrated!) I had to pass up so many events that I will not try and list them all.

But if there is only one place to go in Jerusalem to take a break, the Jerusalem Botanical Gardens would be at the top of the list.

To see the brides posing for their wedding photos in the lush gardens,

and multiple groups attending workshops and meetings, it is hard to remember this was a Jerusalem garbage dump not so many years ago.

Go a bit further up the street (why do all Jerusalem streets appear to only go up?) from the Jerusalem Botanical Gardens is the Hebrew University Givat Ram campus. On top of the hill is the Kfar HiTech, High Tech Village sign.

Across the Begin Highway from the Hebrew University campus is the ever-growing and expanding, Azrieli College of Engineering Jerusalem. Remember back in 2019 there were so many events it was hard to keep up?

And on the other side of the highway is the growing and expanding Lev Academic Center, Jerusalem College of Technology JCT.

For the one event I attended this week, Jerusalem Mayor Moshe Lion was the featured guest and speaker.

It was the groundbreaking ceremony for the Machon Tal Campus of JCT.

Rav Yosef Zvi Rimon, the Rabbinic Head of the Jerusalem College of Technology was also at the groundbreaking, important event.

The Machon Tal Hackathon in 2019 was impressive, along with the other Israeli – Jerusalem – innovation labs and startups. The new women’s campus will be the permanent home of future academic excellence for up to 3,000 female students in nursing, computer science, industrial engineering, accounting, and management.

When he entered and the entire time Moshe Lion had a broad smile.

A happy and positive event, filled with smiles was the one piece of “work” I was able to manage this past week.

The new campus is poised to provide increased opportunities for religious women to pursue higher education and attain quality employment in scientific and high-tech industries.

It will enable the opening of an industrial engineering and management track as well as a new nursing program for Haredi women, and a brighter future. More photos HERE

I did not get to the Israeli Education Week events at the Jerusalem International Conference Center I had on my calendar.

Back to unpacking, but I wanted to share this one important education story you may have missed seeing.

Full disclosure, I have known Professor Sukenik and his wife, a long-time friend, for many years.

Who would guess we took Organic Chemistry in college at the same time, our paths diverged, and we would meet up again on the Jerusalem streets?

Hope to see you all on the Jerusalem streets – and for a happy occasion!

How was your week?

I found following the news, this past week has been more challenging than usual. It is hard to figure out what is real and what is fake news. Old images from video games were posted as current events in Ukraine, plus not knowing what will happen next. It is just so unbelievable.

Last week RJS shared the photo of the former Putin Pub a few hours after the name Putin was removed from the popular Russian bar on Jaffa Road.

Today, Prime Minister Naftali Bennett spoke with Ukrainian President Volodymyr Zelenskyy, the third conversation between the two leaders in the past day. Bennett took a flight to Russia on Shabbat to meet with Putin and took Zeev Elkin along to translate.

No way I would dream to predict what will happen next, but I will share what happened last week in Jerusalem, Israel, that you probably missed due to the world situation taking over our hearts and minds.

The new lights on the Jerusalem Great Synagogue brighten it at night.

I was on my way to the Yeshurun Synagogue where a special service was being held in memory of Esther Pollard z”l.

Jerusalem Mayor Moshe Lion was one of a long list of speakers. The entire program was broadcast live and available on YouTube. It was in Hebrew, but Jonathan Pollard spoke at the end in English.

Jonathan Pollard rose from his seat to shake hands with the Mayor.

The synagogue main hall is one of the larger venues in Jerusalem.

The same night, also off of King George Street, was the second week of this year’s Shaon Horef.

The Winter Noise street festival was held on Shatz Street this week.

Again with video animations on buildings and live music, food and drink.

But what was special this winter night was the grand opening of the renovated Gerard Behar Centre and Beit Ha’Am.

There was a silver-studded doorman on the red carpet.

And a golden ballerina inside where invited guests were munching on fancy hors d’overves being passed around on platters in the lobby.

A very exciting event for Jerusalemites and visitors, there’s now a well lit parking lot on the adjacent Menora Street. How long was this street off of Ussishkin Street impassable as a construction site?

Also, this week at the Isrotel Orient Hotel, was the renewed regular meeting of

The Jewish Agency Board of Governors. In the past I had always attended at least one session. The Jewish Agency staff in Eastern Europe is working overtime with the Ukrainian/Russian crisis. This year the Jewish Agency governors were too busy to have meetings open to the media. They still have not selected a successor to Isaac Herzog to be the new Chairperson.

The visit of the new Chancellor in Germany to Jerusalem was a much more public event. Most of his short visit was spent at the King David Hotel on King David Street.

When Bennett met German Chancellor Olaf Scholz at the hotel for a press conference and lunch, security was very high.

After Scholz left, the German flags were still lining the Jerusalem streets, but the armed security personnel were no longer posted on the street corners along the route of the motorcade.

As I mentioned last week, it was good to see people out along the walls of the Old City and tourists back on the Jerusalem streets.

Paris Fountain came back this week, but construction is far from over.

The Jerusalem Marathon signs for the March 25, 2022 races are hard to miss. Runners can be seen training for the Friday morning run all over town. Should be interesting to see what happens as March 25 is also the day when the clocks change.

The weather is also up and down, cold and wet, hot and sunny. But a new Spring Festival in Jerusalem, Eat & Show, has been announced on Jerusalem street signs.

Of course, if it’s after Rosh Chodesh Adar, Purim preparations are well underway. Purim for families in Jerusalem is a list too long for now.

Celebrating Purim on Friday again is not my favorite thing.

However, I did put a few favorites together in a short video to share some of the highlights of this past week, from quiet parks by day and dynamic music and dance by night.

The skies are finally open again.

Take care and hope to see you soon on the Jerusalem streets.

The Israeli Prime Minister is on his way to Moscow.

The Israeli President hosts visitors from Greece and Cyprus.

The Israeli spacecraft Beresheet is on its seven-week journey to the moon.

The privately-funded Israeli space capsule was launched from Florida.

If successful, Israel will be the fourth country to land on moon. 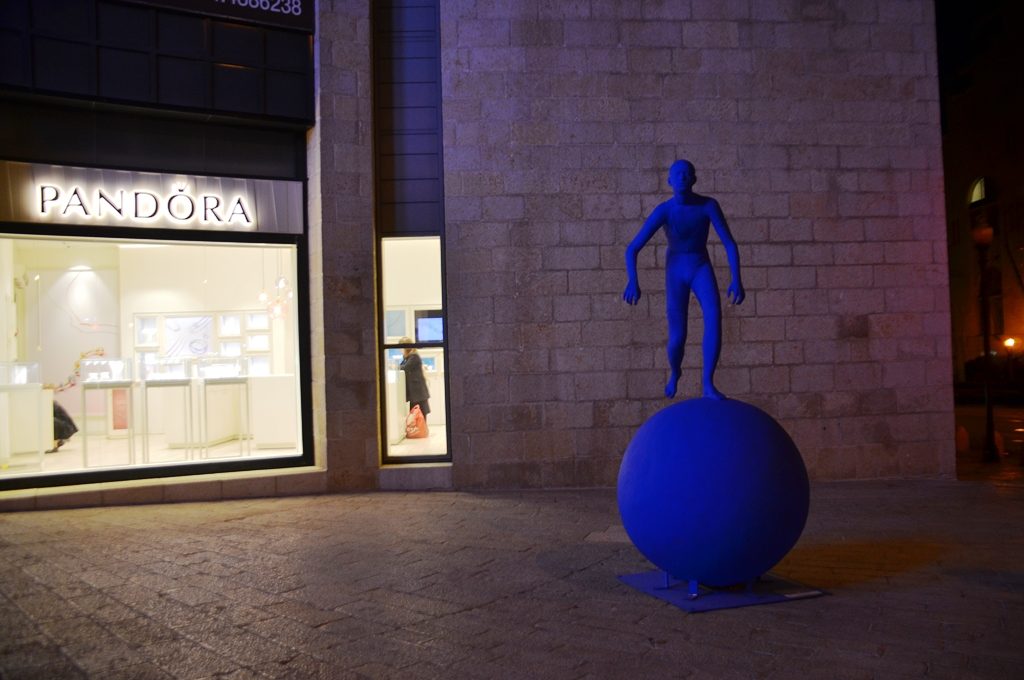 Back here on earth, in Jerusalem, in Israel, life is a balancing act. 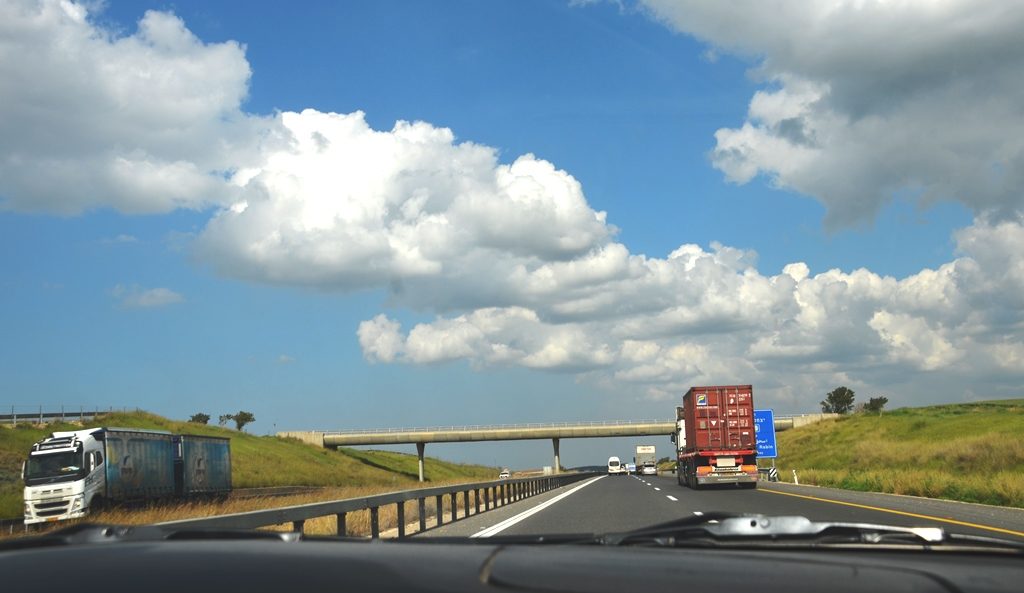 On the one hand, new modern roads stretch for miles over former donkey paths and barren sand. 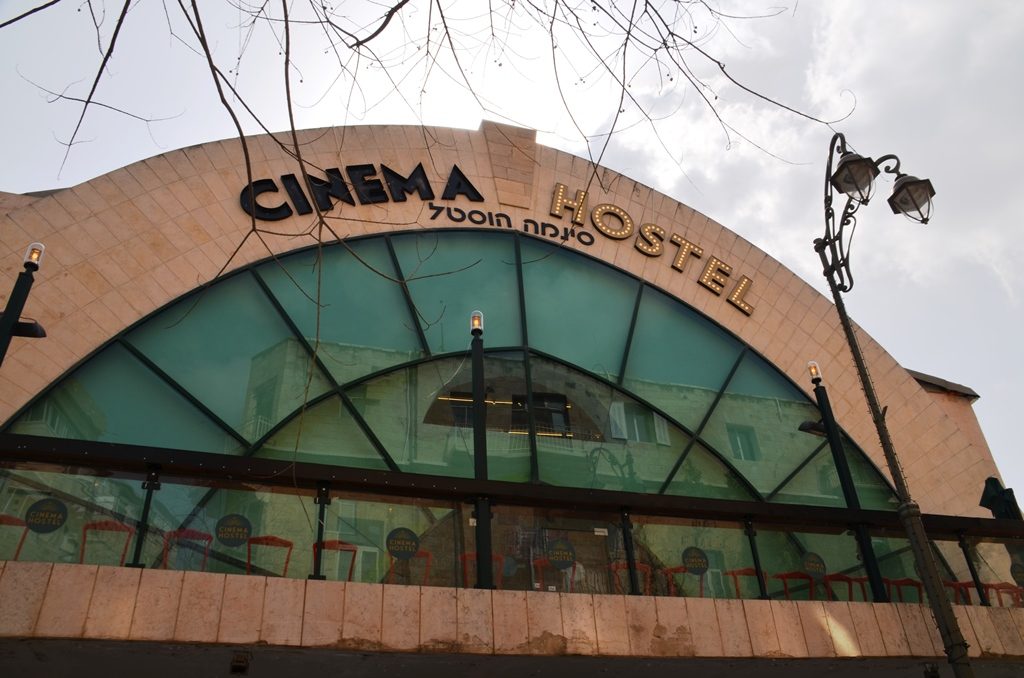 New lodgings in Jerusalem are too many to list now. 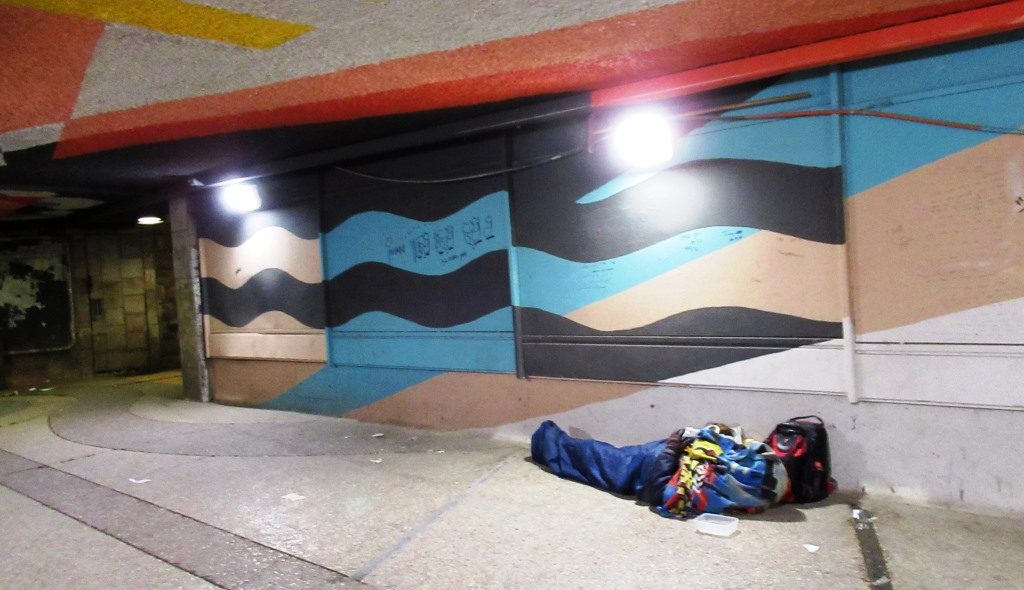 But on the first really cold night in awhile, this homeless man was sleeping in the underground passageway to the new Navon fast train station and Jerusalem Central Bus Station. 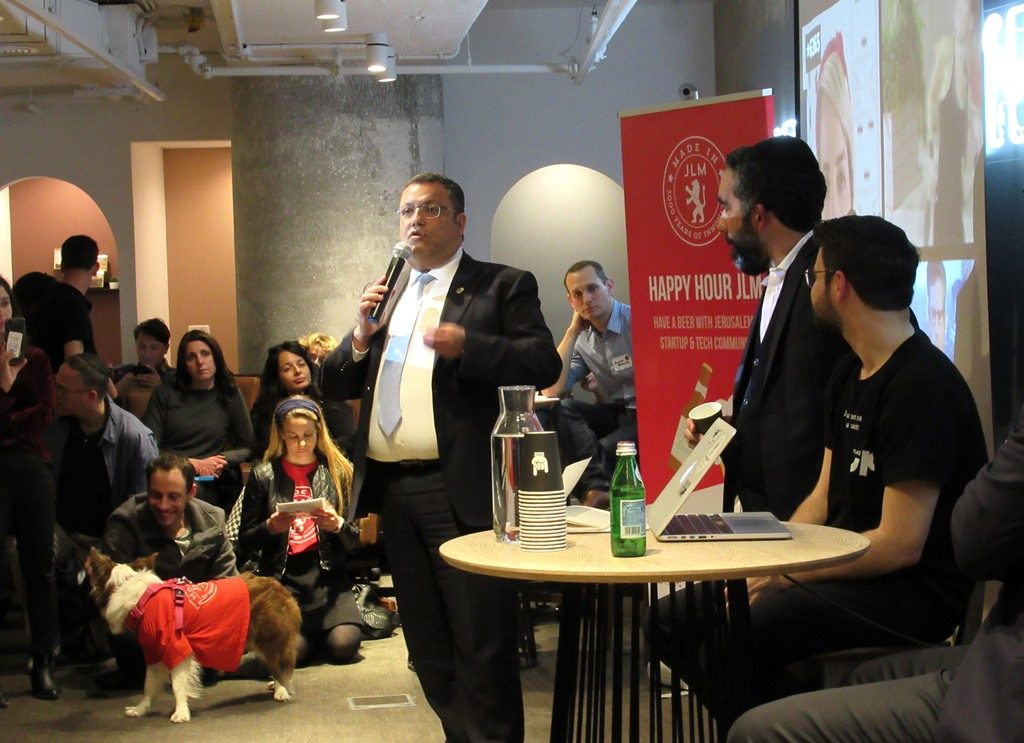 At the same time, on the fourth floor of the bus station, Jerusalem Mayor Moshe Lion was speaking at the launch of Urban Place, a new co-sharing work space for nearly 100 businesses.

Also this week, Lion hosted mayors from around the world at a conference which opened in Kikar Safra, Jerusalem’s City Council Chambers. 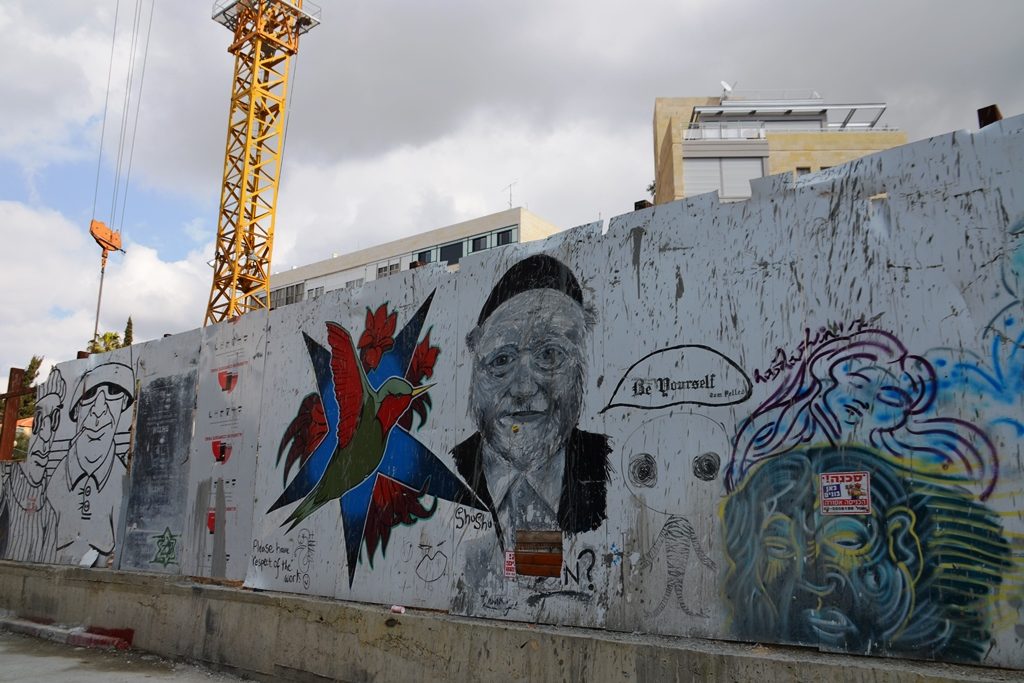 Around Jerusalem, construction fences surround building projects, which descend many stories down into the ground, and are covered with graffiti. 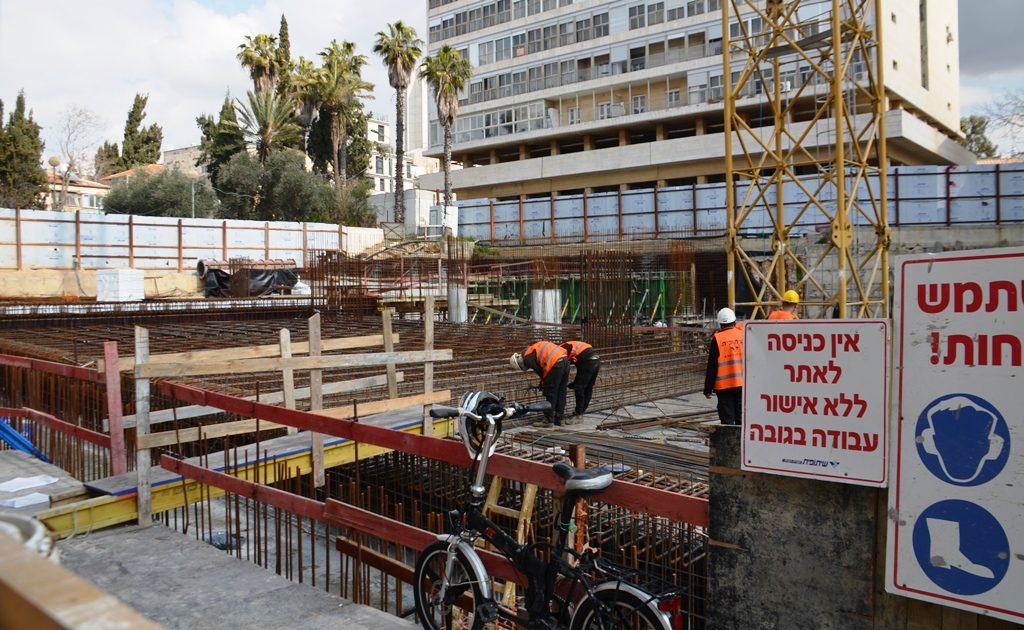 It is always exciting to see when these projects finally reach street level. 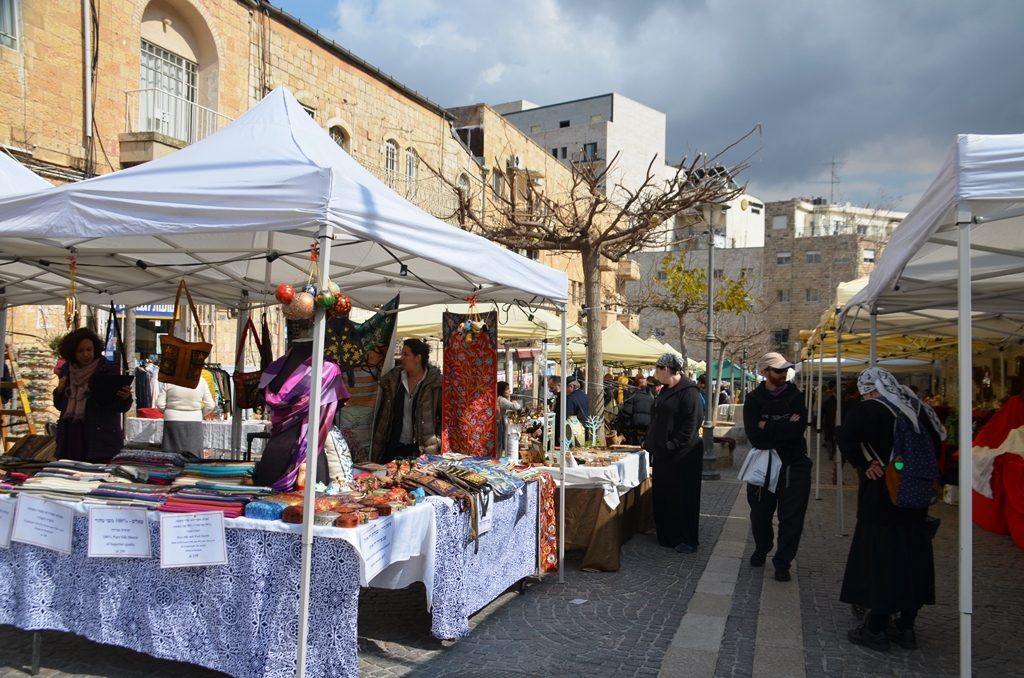 Nearby a market on Agrippas Street is busy when weather permits. 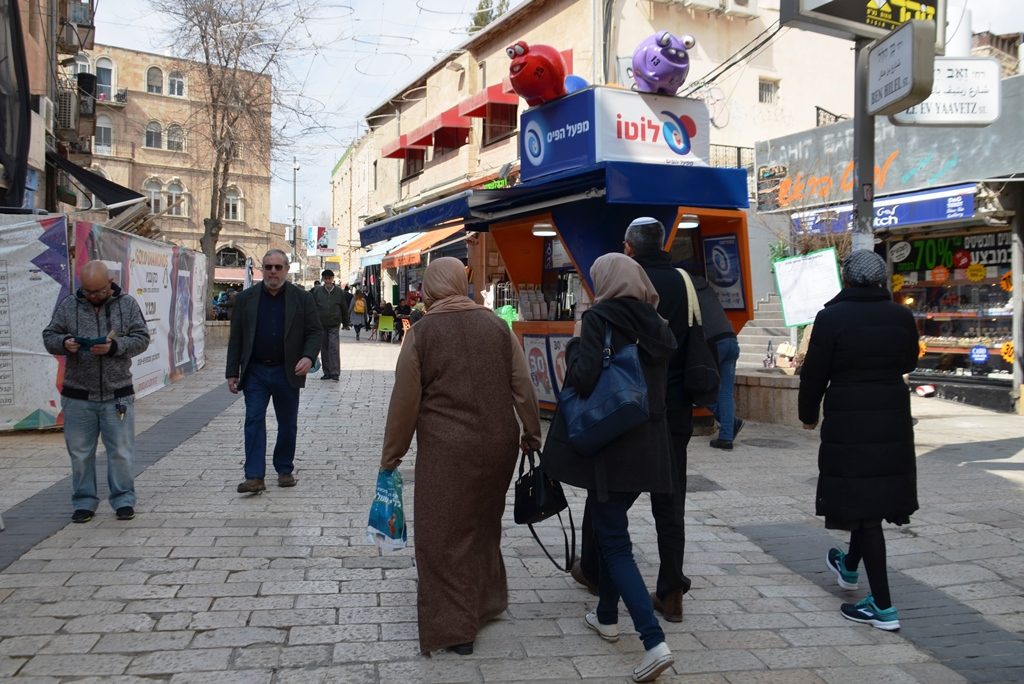 But rain or shine people come to the city center to shop.

I was on my way to hear about Arab voting patterns in the upcoming elections. 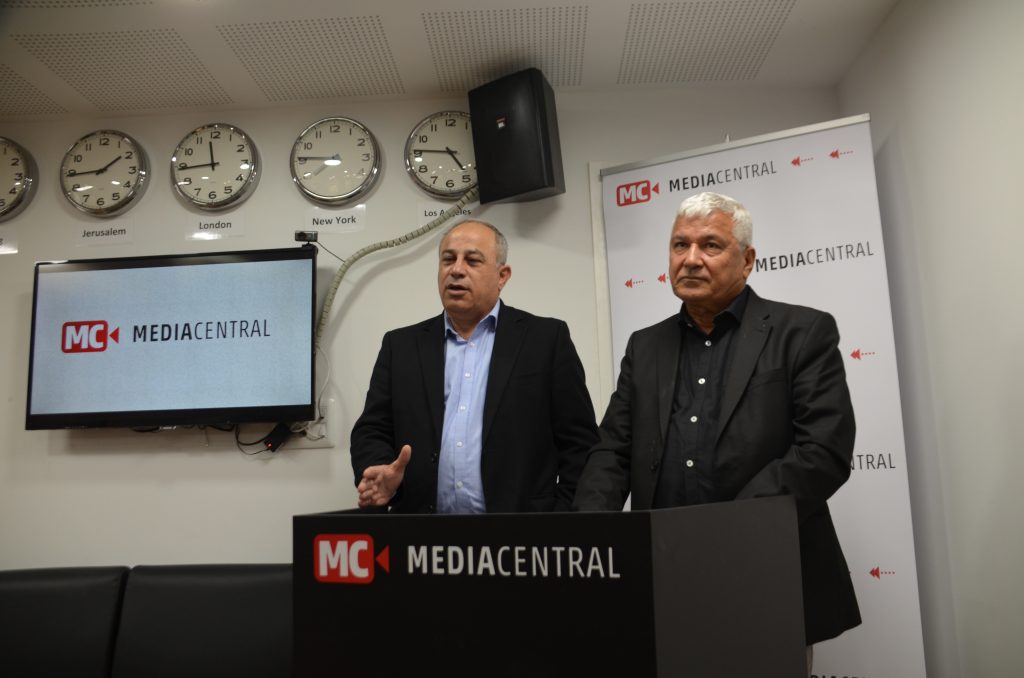 My only comment on elections, these two men from Abraham Initiatives were well prepared and extremely impressive in their presentation in English. 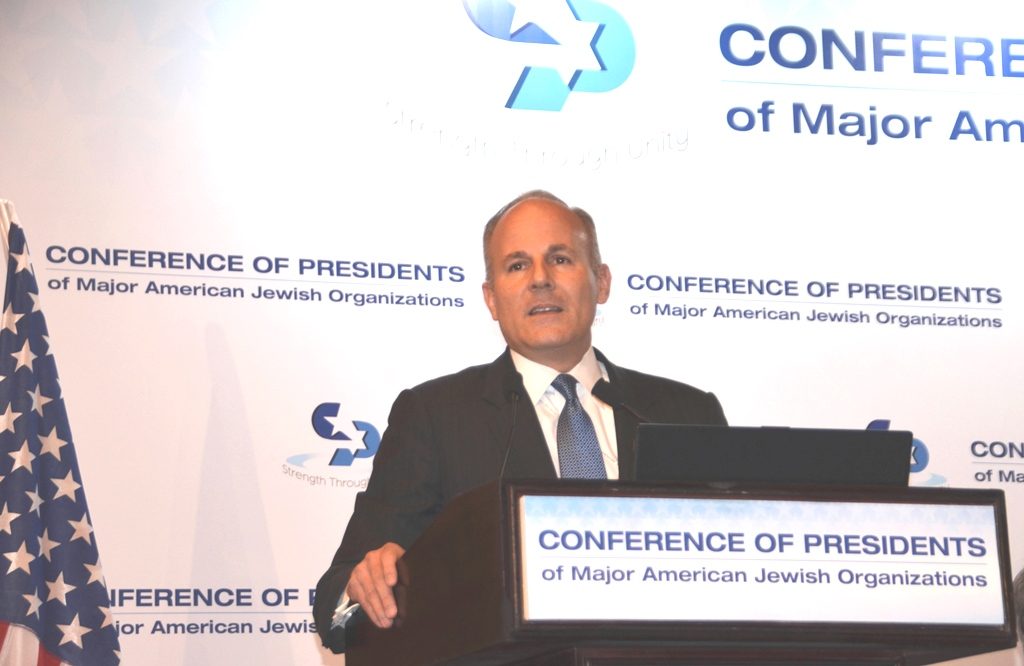 Also that afternoon, Elan Carr, gave his first major address after being appointed the US Special Envoy for Monitoring and Combating Antisemitism in Jerusalem. 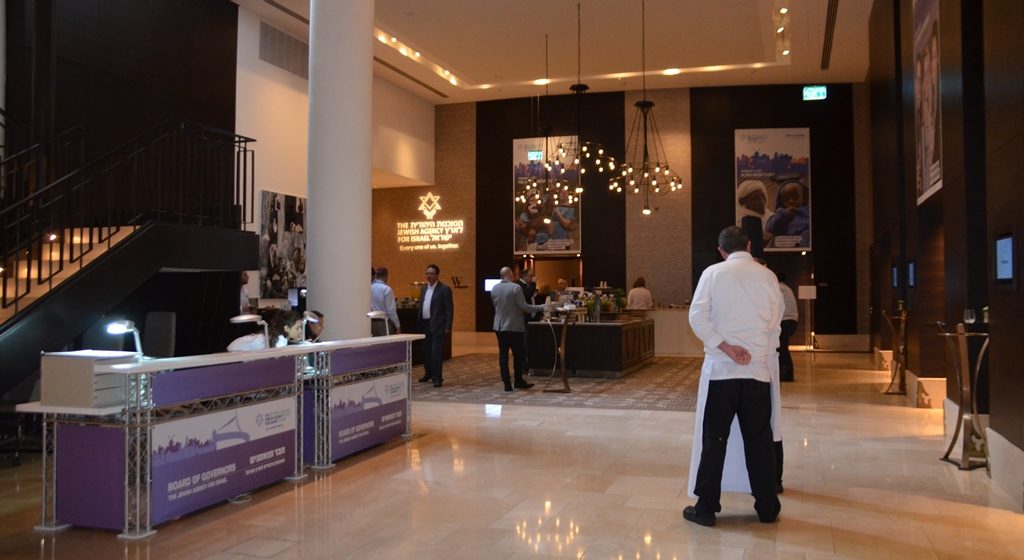 The Jewish Agency Board of Directors also met in Jerusalem this week. 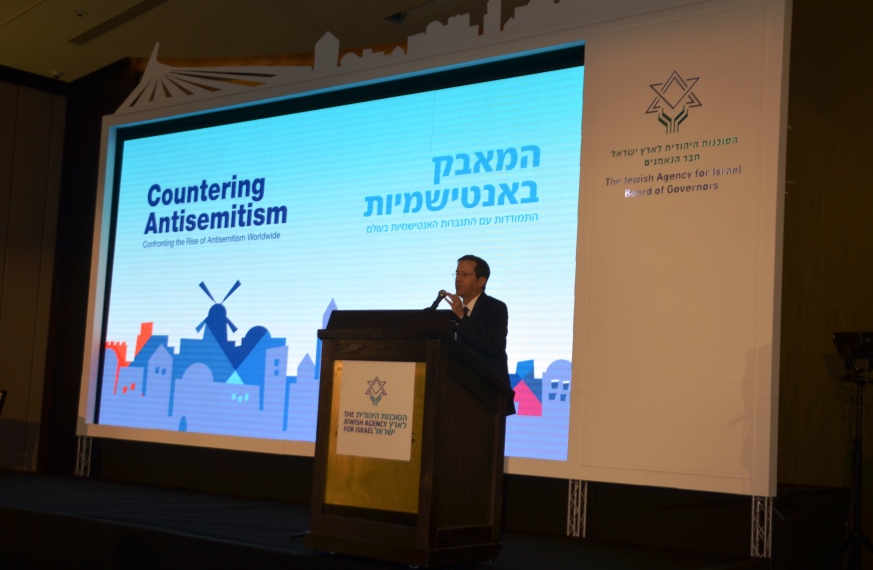 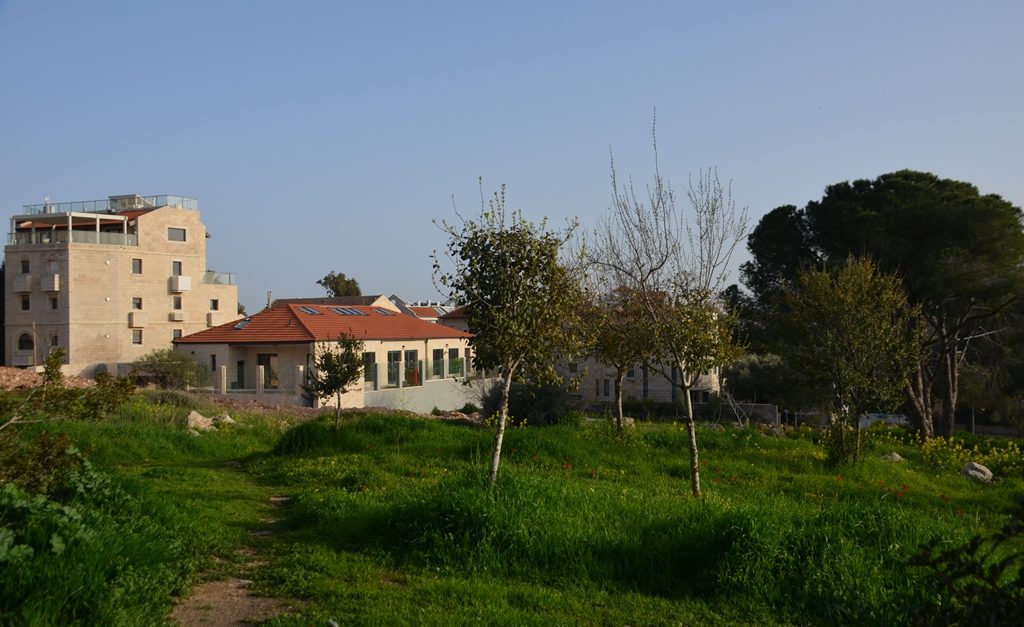 Meanwhile, a new synagogue building nearby is approaching completion.

When the sun came out after rain, so did the wild flowers in fields of green. 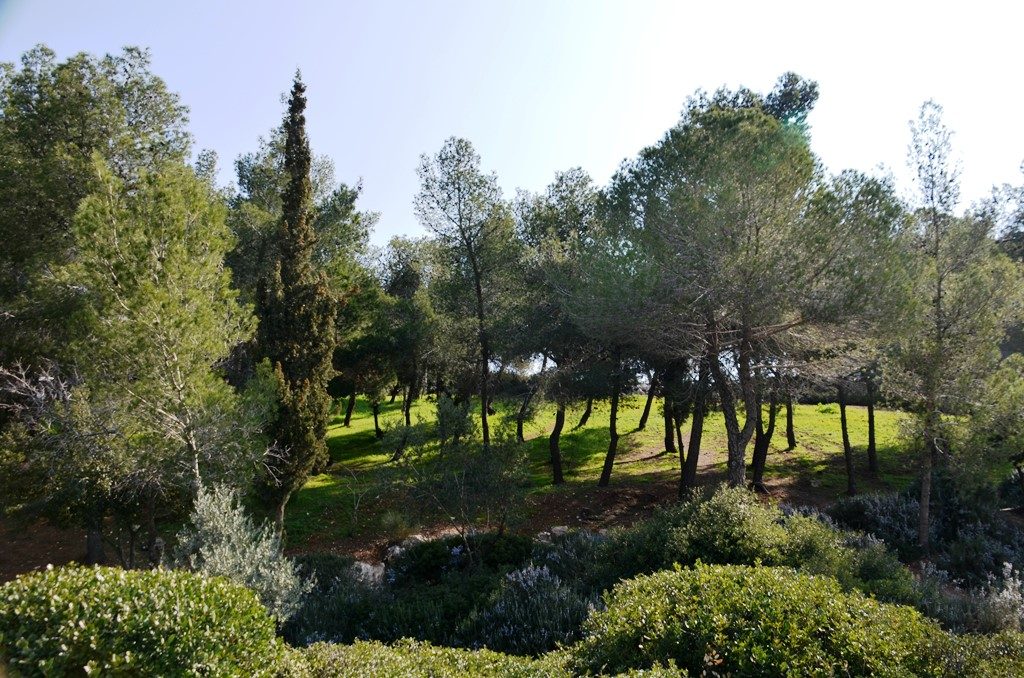 Around Jerusalem, the nature areas are lovely. 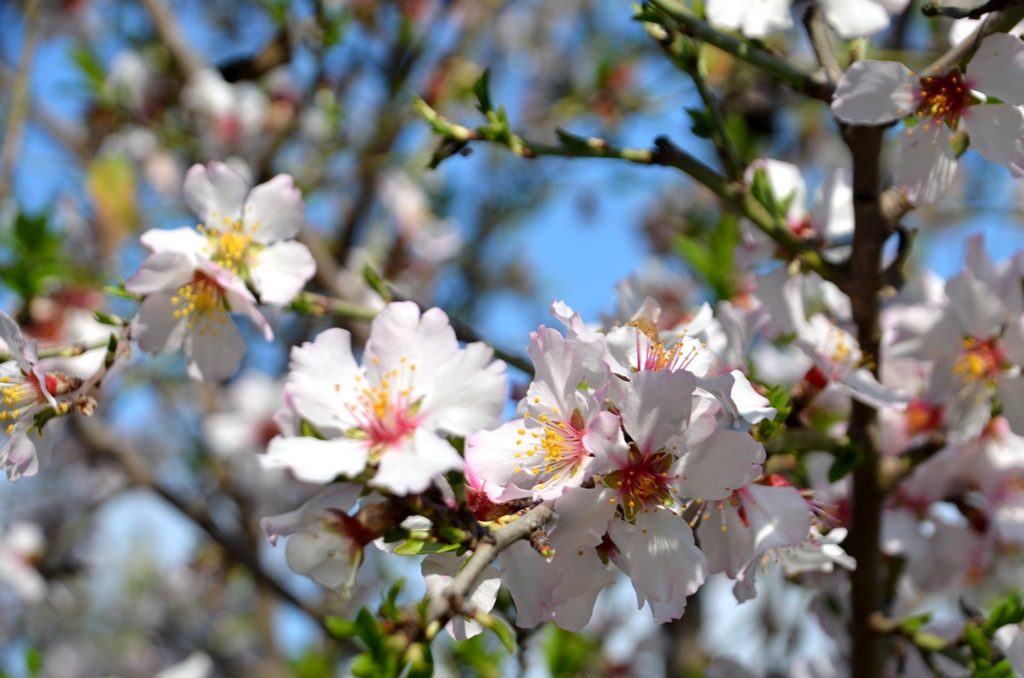 But I am not sure these petals will outlast the hard winds blowing up now. 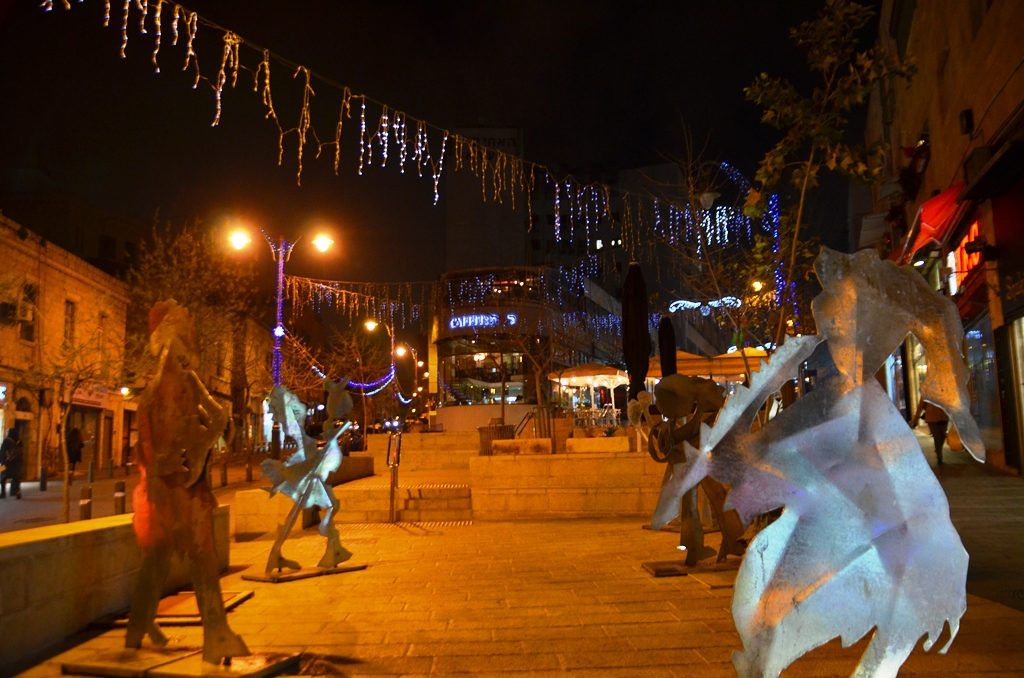 At night for the Shaon Horef  I was not sure what this was. 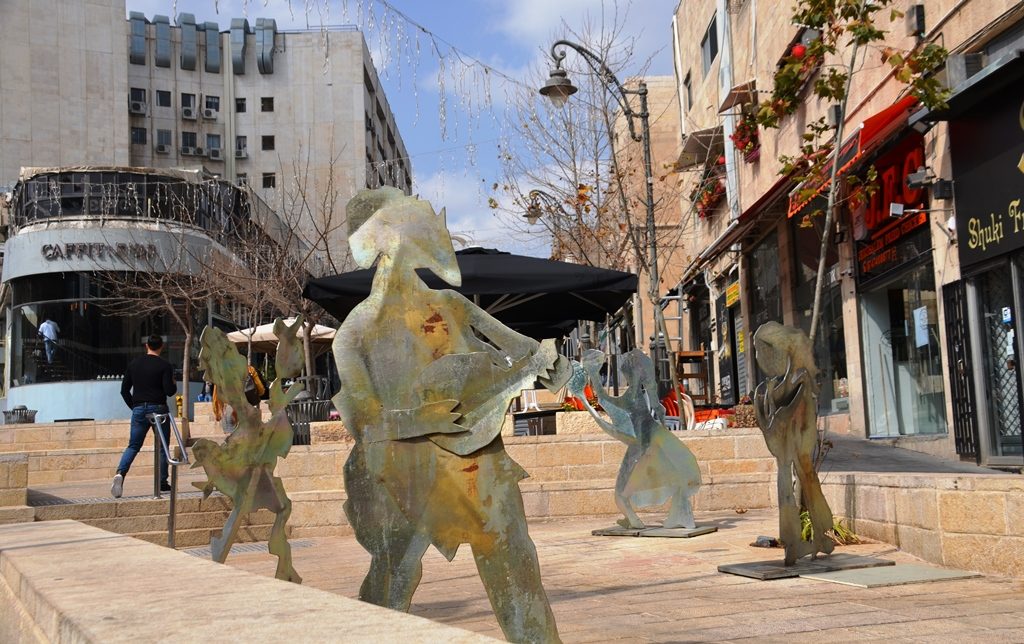 The many new street art installations are better appreciated by day. 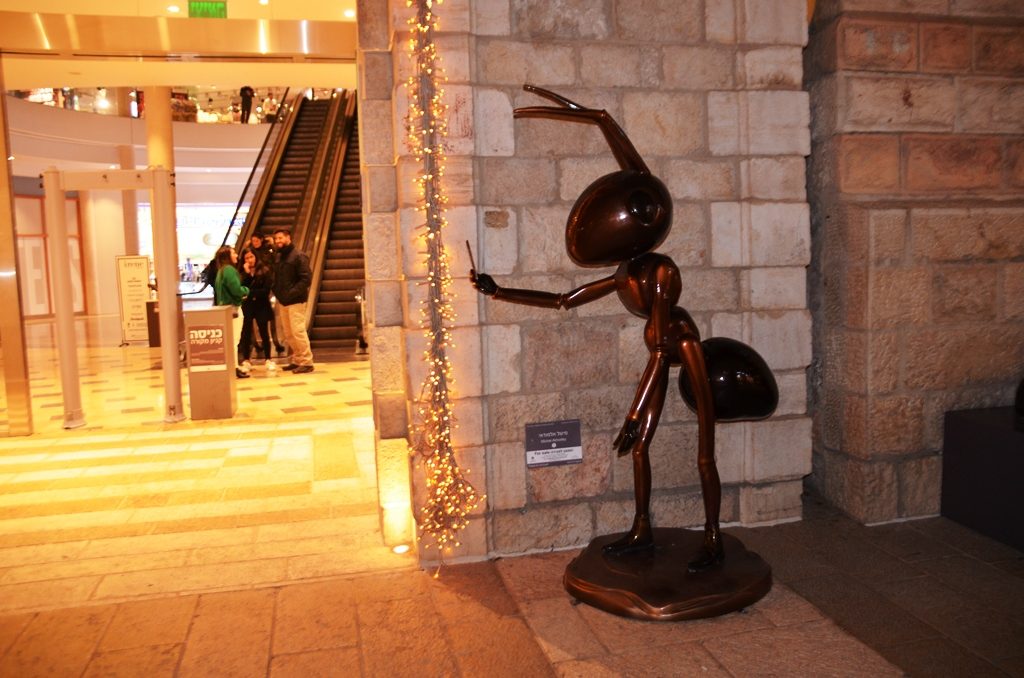 Mamilla Mall has some new out-of-the-box, out of this world, art on display. 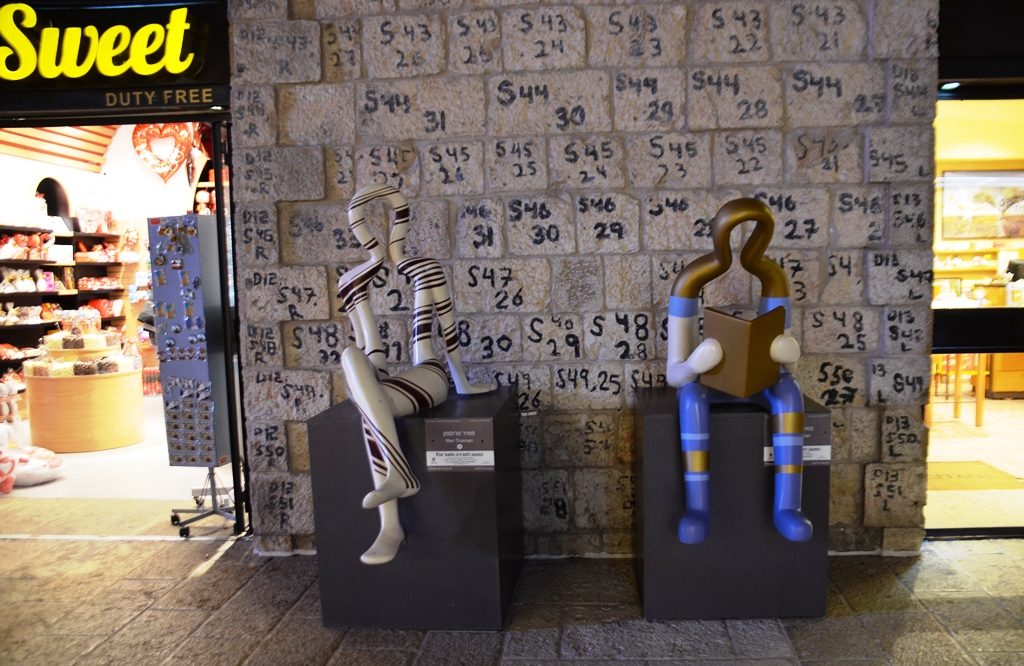 At least the sculpture figures are still reading books. 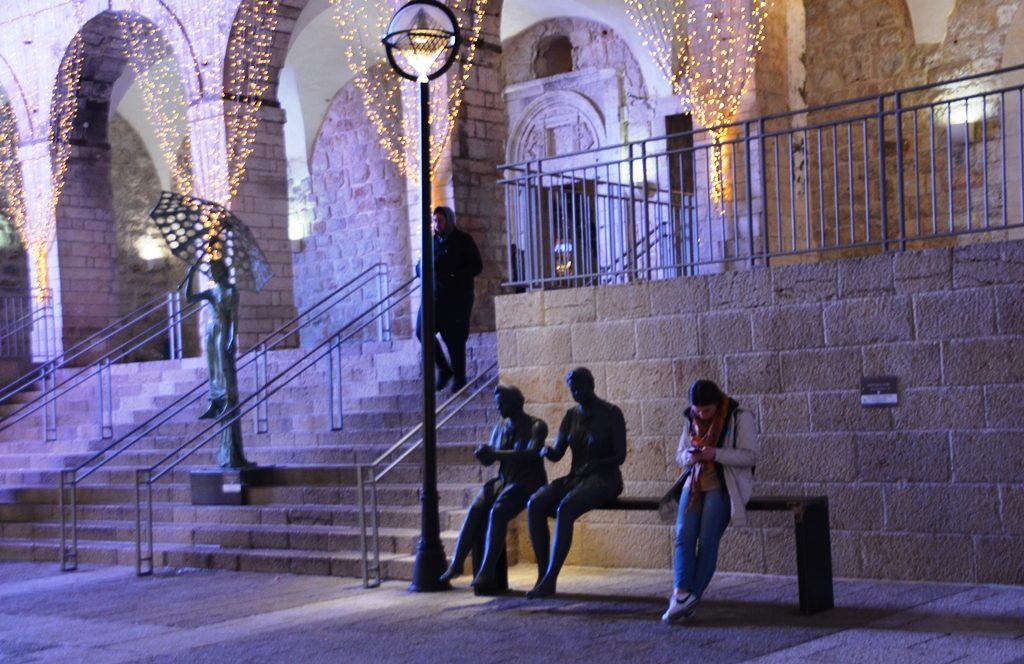 Real people seem to interact more with their phones these days.

The world, politics, and weather seem so uncertain one minute to next. 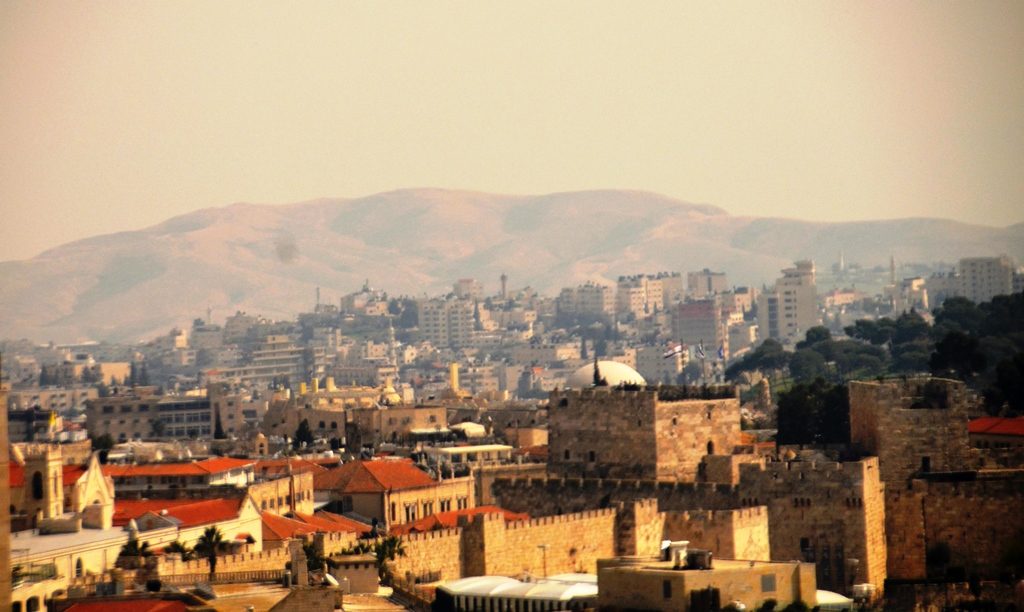 But, on a clear day from Jerusalem, you can see still Jordan not so far away. 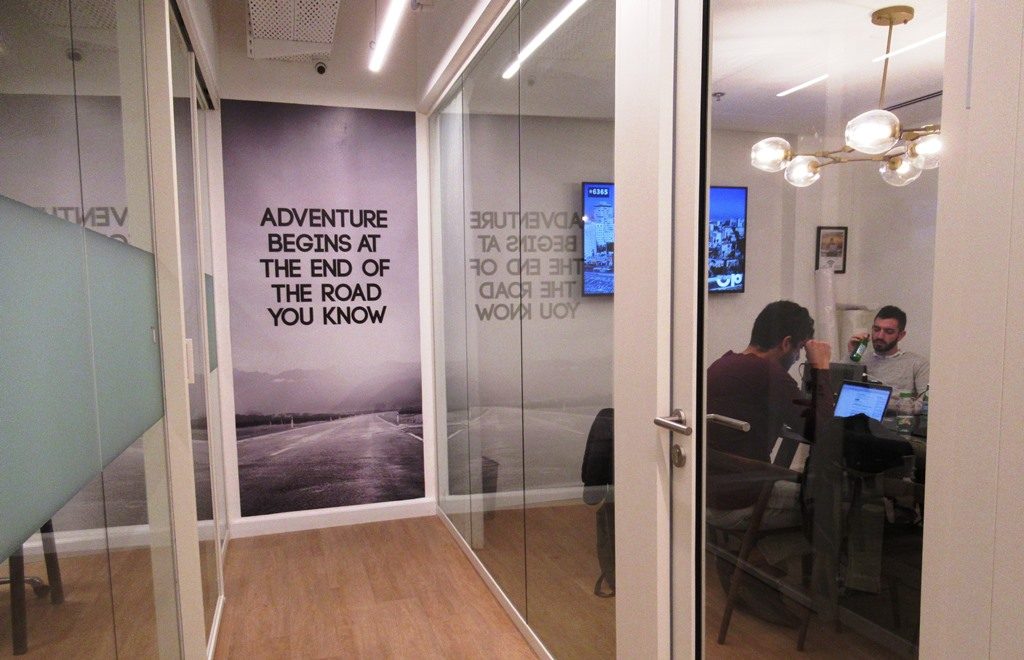 I liked this poster at the end of hall of offices at Urban Place.

“Adventure begins at the end of the road you know.”

Beresheet may or not get to the moon.

But it is still a wonder.

With all the problems, from near and far, amazing what tiny Israel has been able accomplish.

Elan Carr gave such a powerful speech, I thought I would share a few minutes of it.

And to end on a high note, these young Israeli dancers with so much energy are hope for good things in the adventures ahead.

Hard to believe, but much more was happening on the Jerusalem streets this week.