In Jerusalem, the barricades and barriers to keep the public away from world leaders are gone from the streets and sidewalks. People are out again on the streets when the sun appears.

When walking in Jerusalem and someone asks: “where is the museum?”

It is a safe bet to assume they mean The Israel Museum.

So I point to the path up the hill to Jerusalem’s largest and best known Israel Museum.

However, there are dozens of museums in Jerusalem, Israel.

In the past week, four museums opened their doors for special events.

It was a rainy, grey day at the Tower of David Museum.

Over the years, this ancient military fortress has become a popular cultural spot, hosting a wide variety of events, exhibitions, and nighttime shows.

In October 2017, within the ancient stone walls, looking to the future, ToD launched its Innovation Lab.

The ToD is constantly looking for new ways and technology to engage young visitors with Artificial Reality – AR and Virtual Reality – VR, and Apps. Wearing special VR googles was not to be the final answer to get everyone involved with their surroundings. 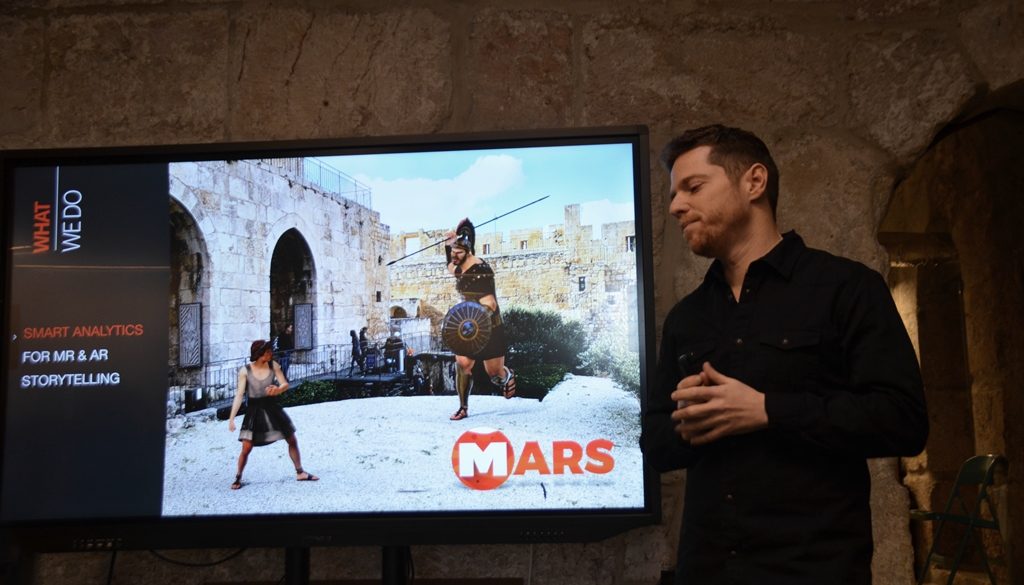 Co-founder and CEO Ori Noam explained how his David and Goliath video, developed at ToD Innovation Lab, make the experience unique to the user. 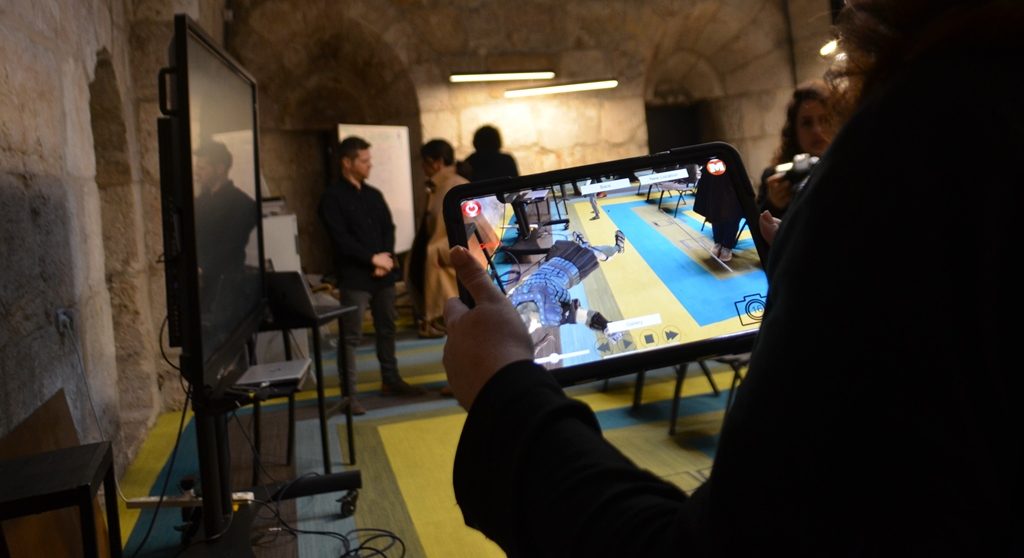 At the entrance desk, for a small additional extra fee, visitors  receive a tablet and earphones. Because it was raining outside, demonstrations had to be inside. 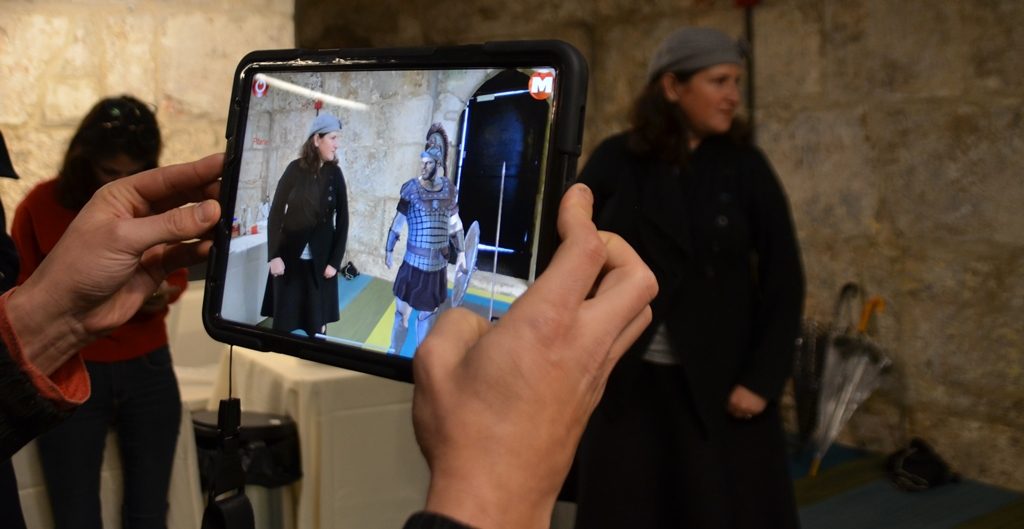 MARS lets visitors interact with Goliath as seen on this tablet screen. 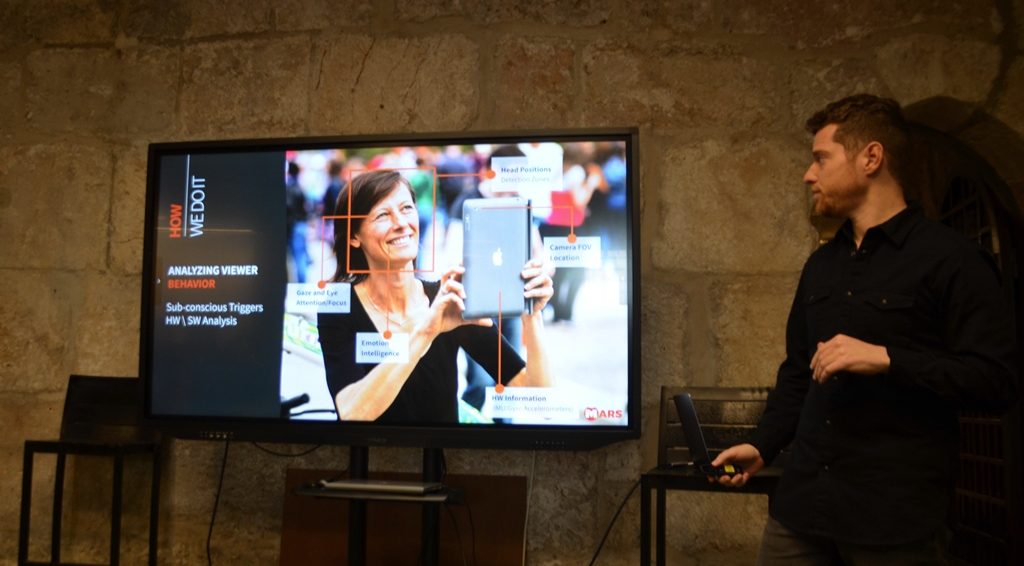 Using sub-conscience triggers, MARS creates an experience unique to each family or visitor. And these days, of course, the mandatory selfie at the end.

Did you realize last week was Israeli Space Week?

The Bloomfield Science Museum was open two evenings free of charge in honor of Space Week. 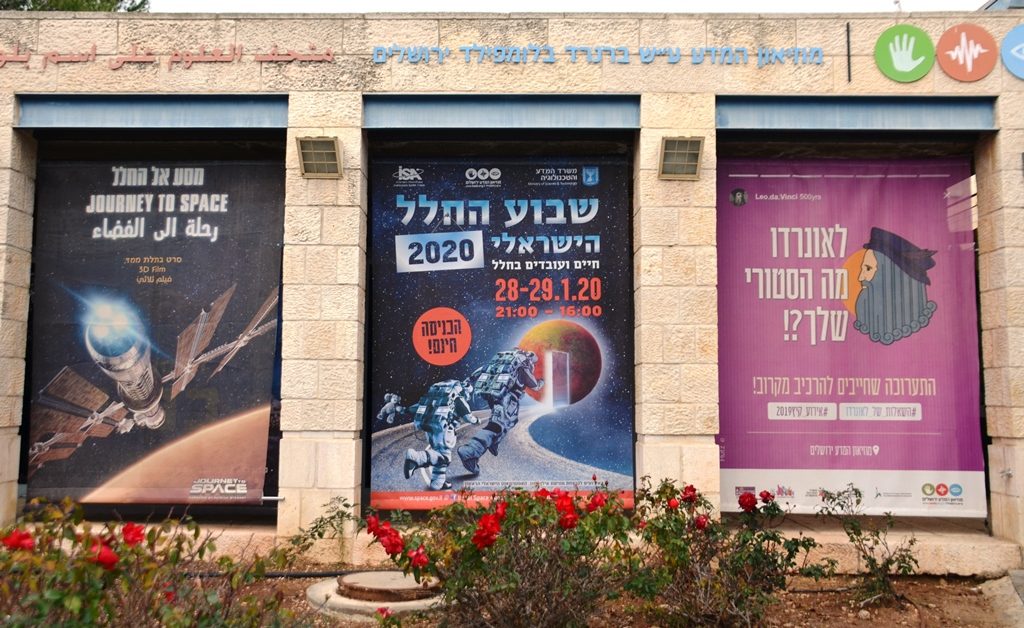 Besides the currently running exhibitions on Leonardo Da Vinci and Journey to Space, Israeli Space Week attracted families with young children to the Science Museum. 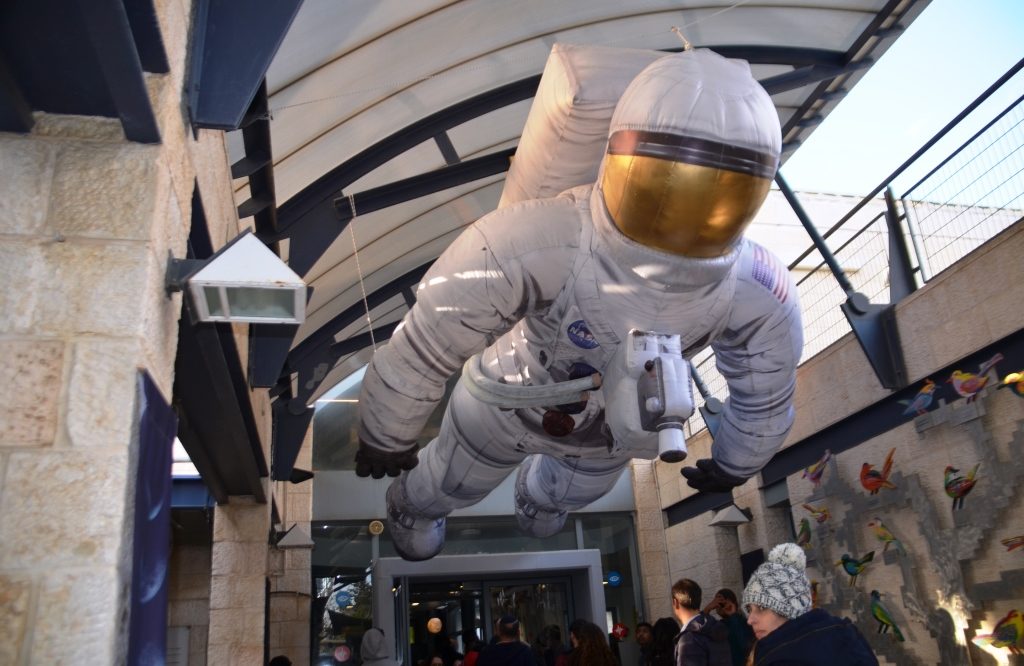 A giant astronaut balloon hovered overhead at the entrance. 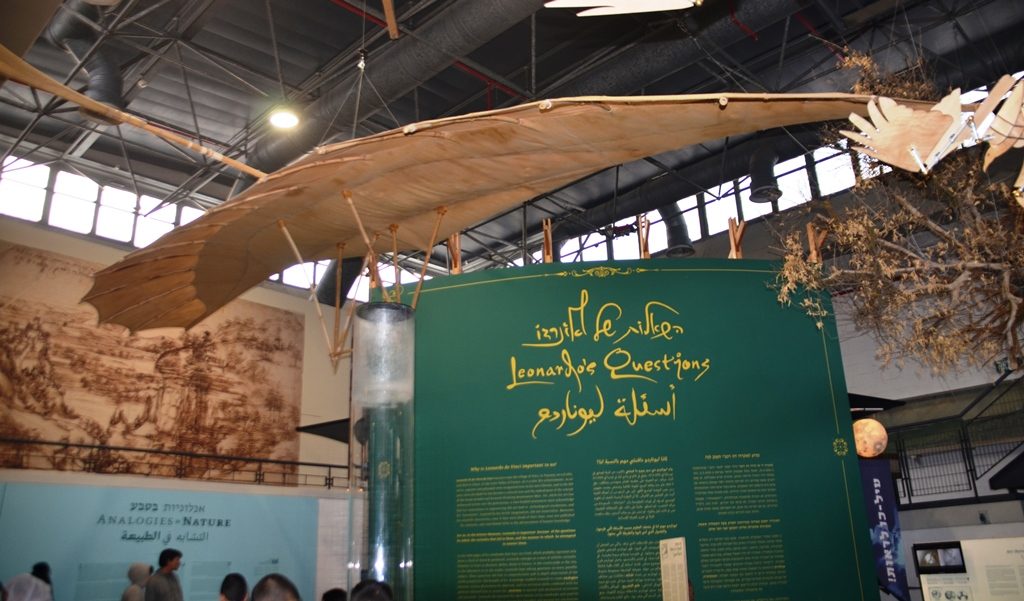 ‘Leonardo’s Questions’ were displayed and answered in the main entrance area with Leonardo’s wings hanging above. 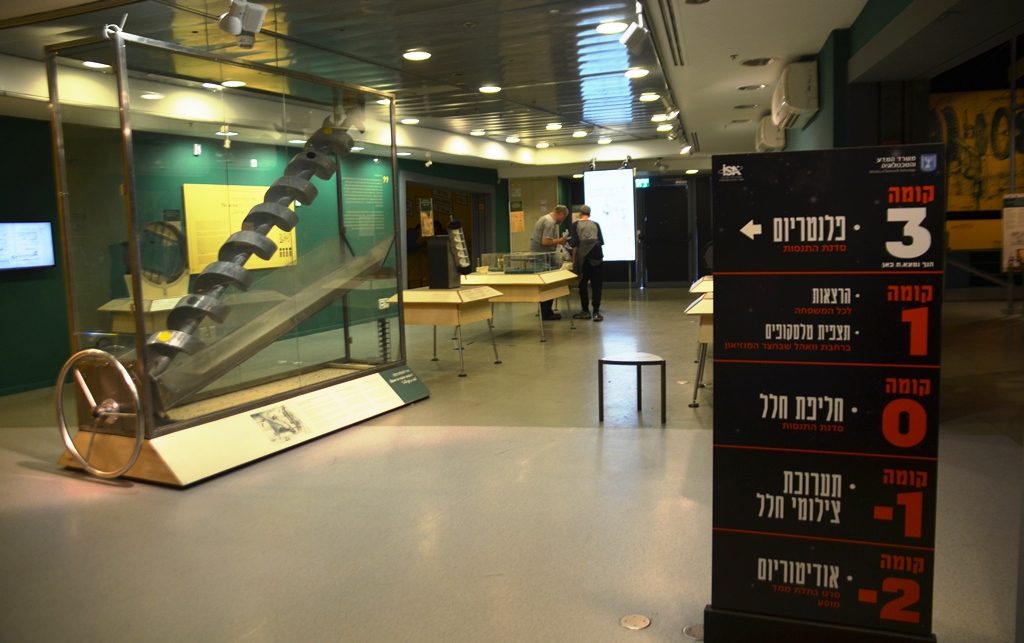 Upstairs on the third floor, I was able to get one image before the room filled with excited children. Oh, to channel all that energy. 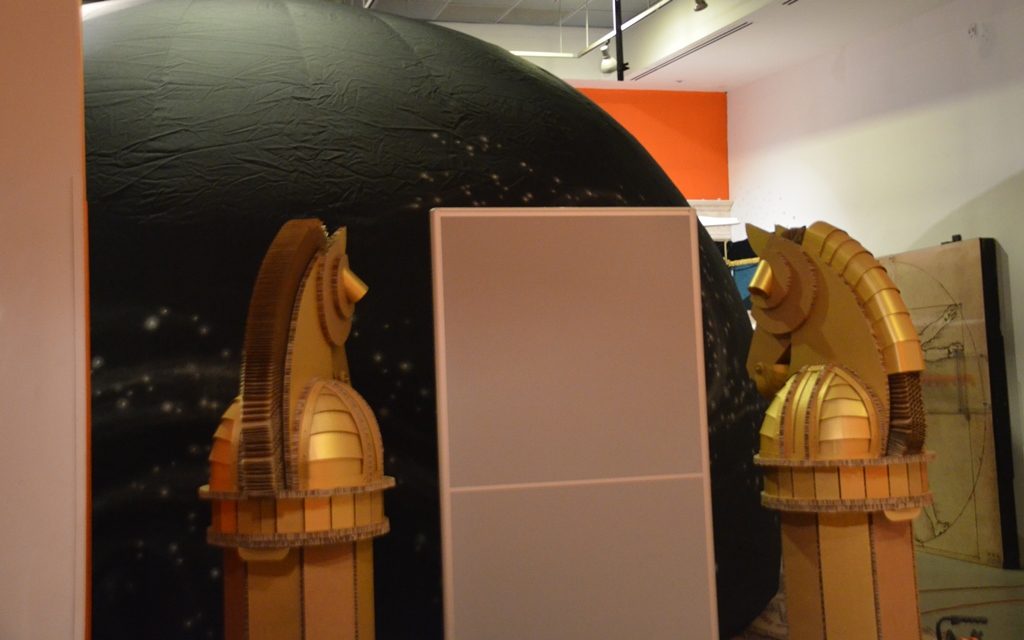 The planetarium required registration to enter, but for photography, I think outside was better to see the black starlit dome. 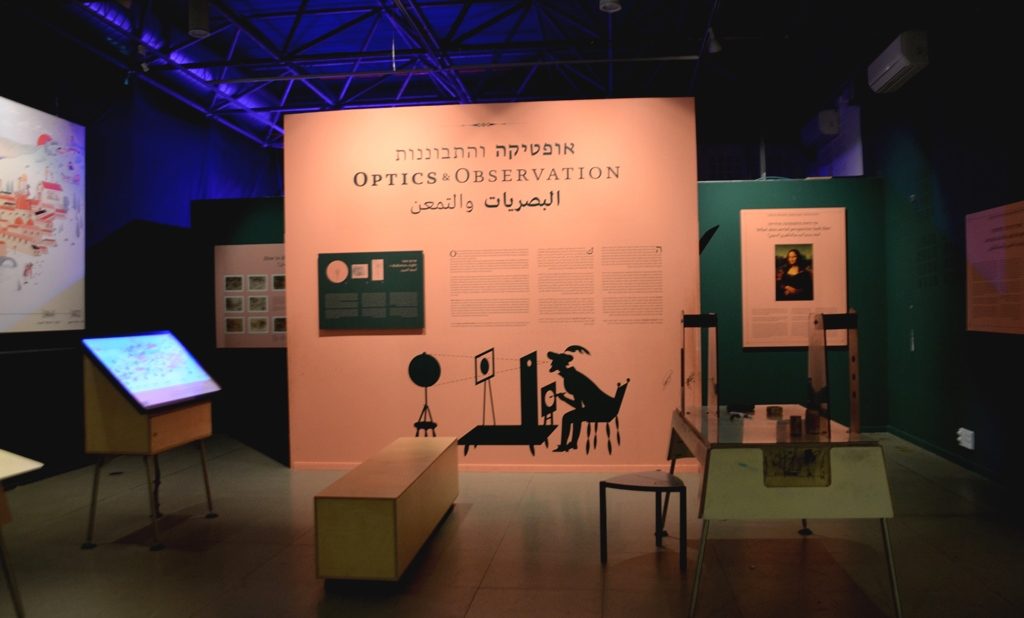 ‘Optics and Observation’ was one of the various rooms on the current Leonardo theme. 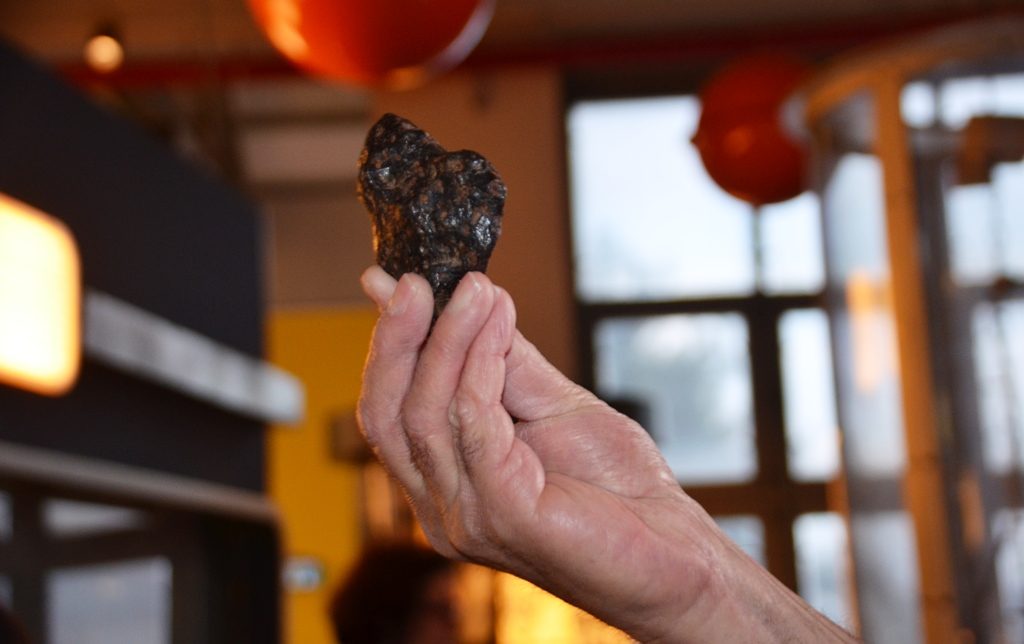 What would be a good space exhibit without a piece of rock from outer space?

Marc, a former employee of Griffith Observatory in California, held a piece of a meteor found in an Arizona crater. Visitors were encouraged to feel a piece of material that fell from space halfway around the world, right here in Jerusalem.

Jerusalem has multiple private museums on a wide variety of topics. 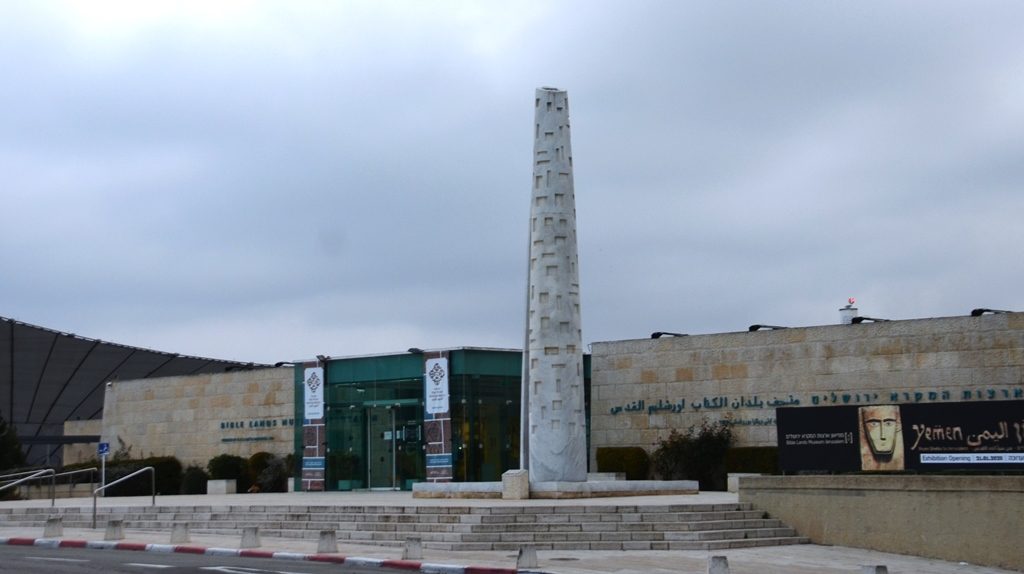 The Bible Lands Museum Jerusalem, BLMJ, is near the Science Museum and across the street from the Israel Museum. 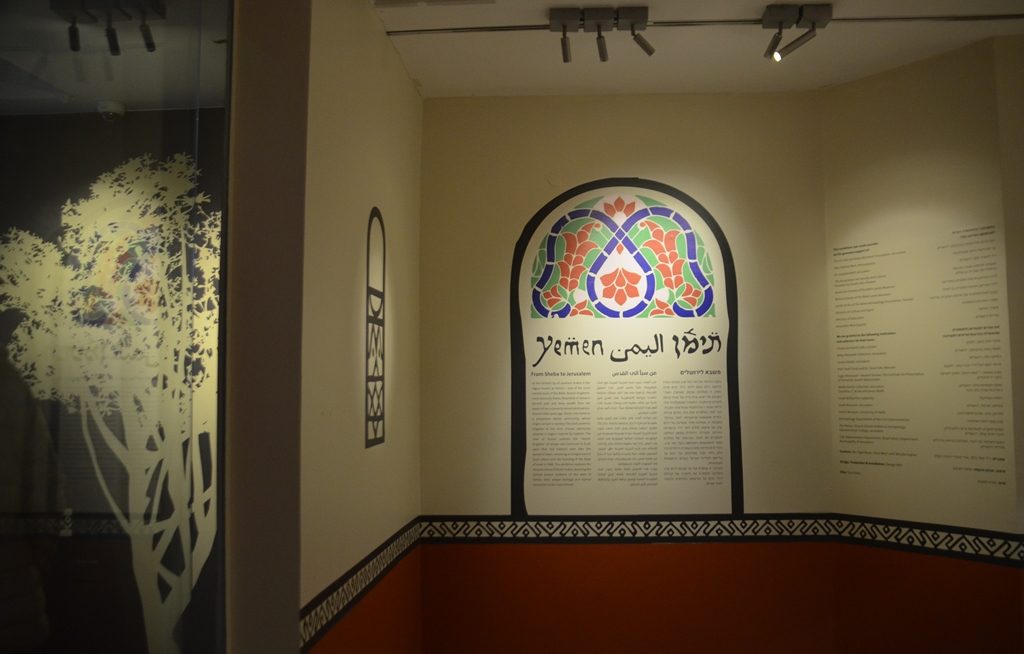 Its new exhibit is simply called YEMEN. The historical development of South Arabia over the centuries is shown in detail to cover all the senses. I was so impressed with a tour before it opened, I had to go back on opening night to see the finished exhibit. 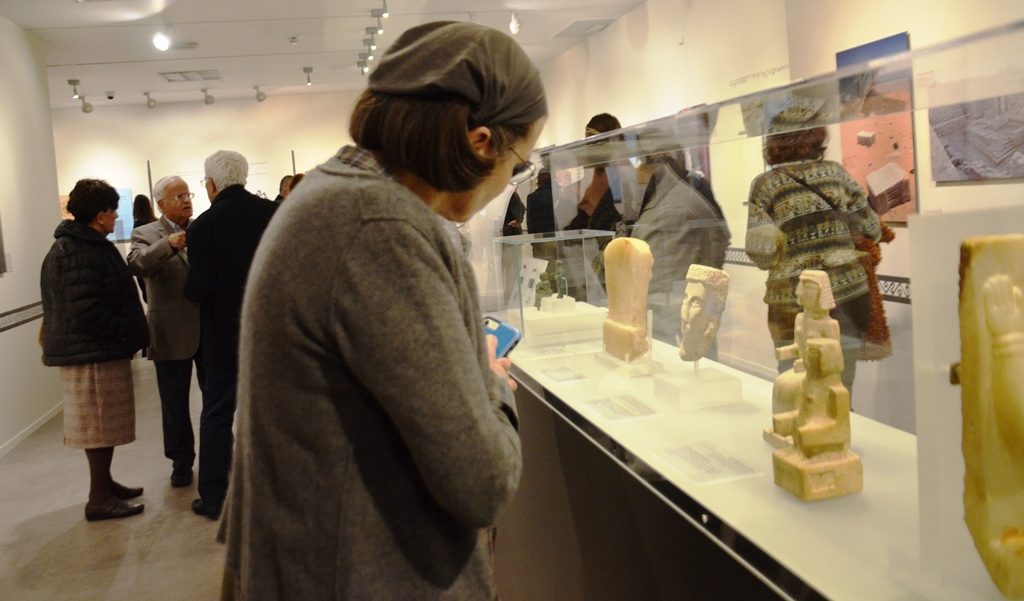 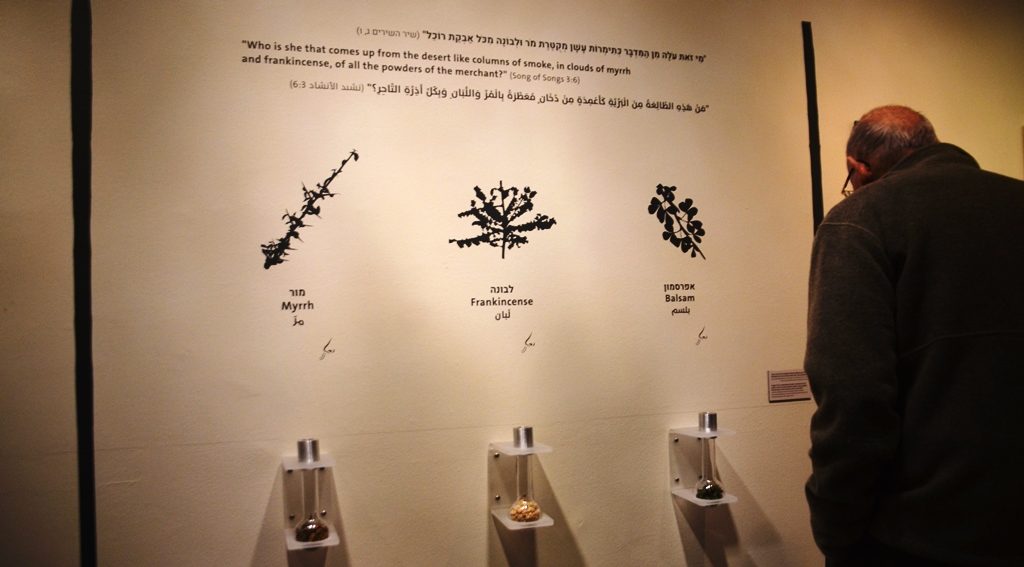 The Jews of ancient southern Arabia traveled over long distances by camel with myrrh, frankincense, and balsam. Here one can smell the aromas so important and valuable in ancient times and compare them. 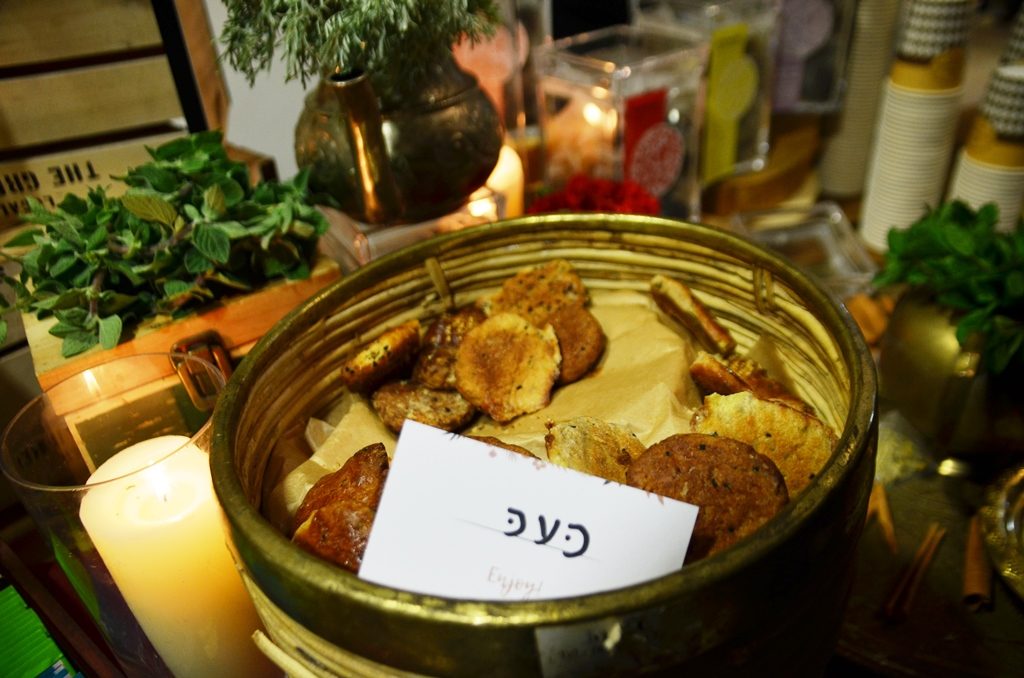 I said all the senses. At the opening evening was this traditional Yemenite savory biscuit. I must admit it was not to my taste. 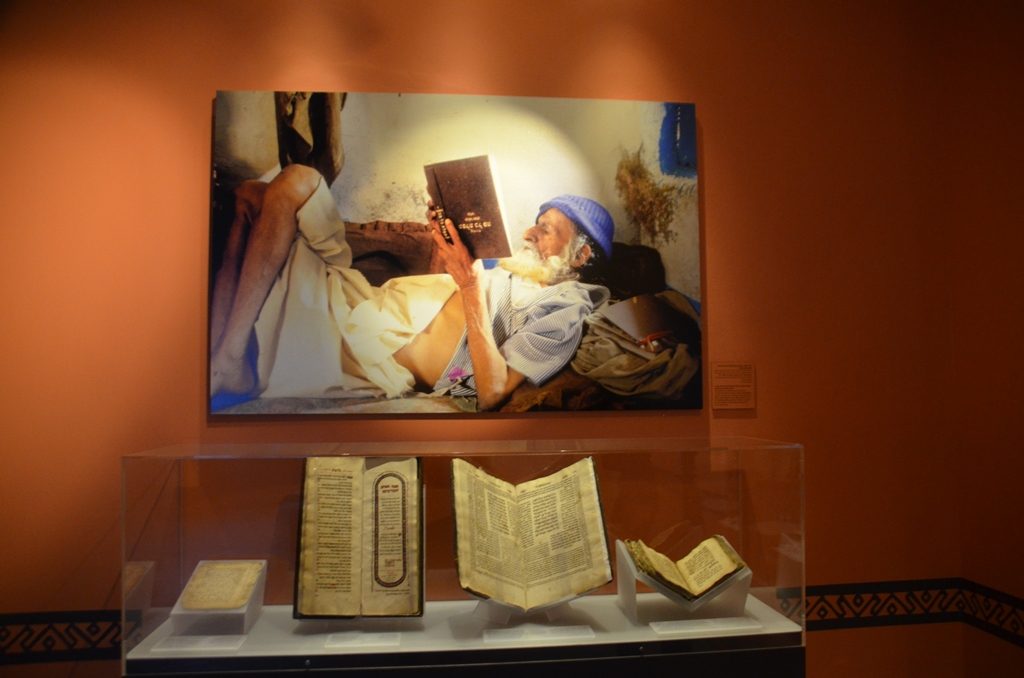 This is one of several powerful photographs by Naftali Hilger on display. Note the Jewish man from Sa’dah is reading a prayerbook upside down. Since books were scarce, children learned to read from multiple directions. Hilger’s photographs taken in the late 1980s add greatly to the exhibit. 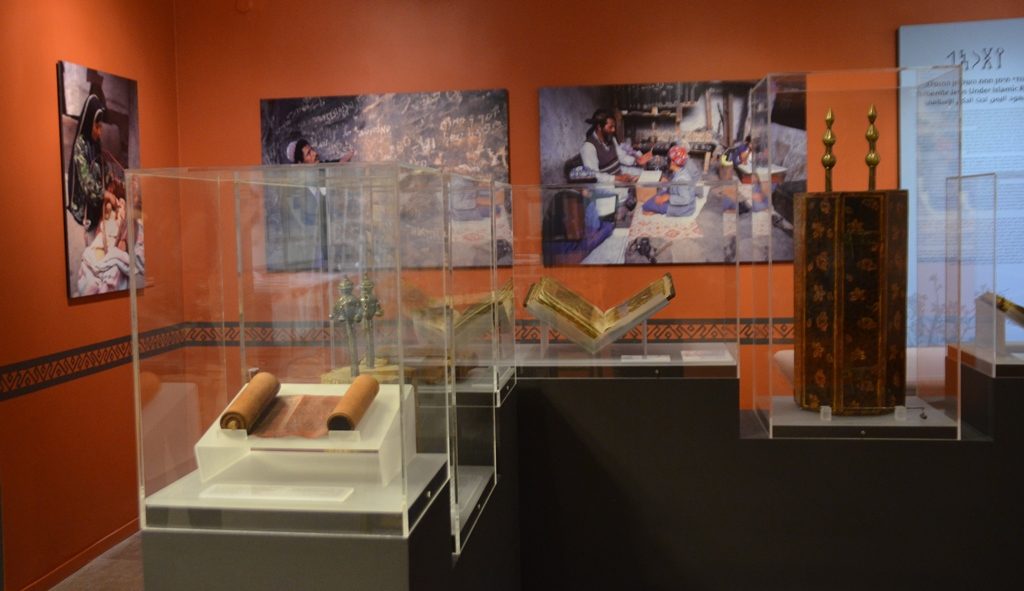 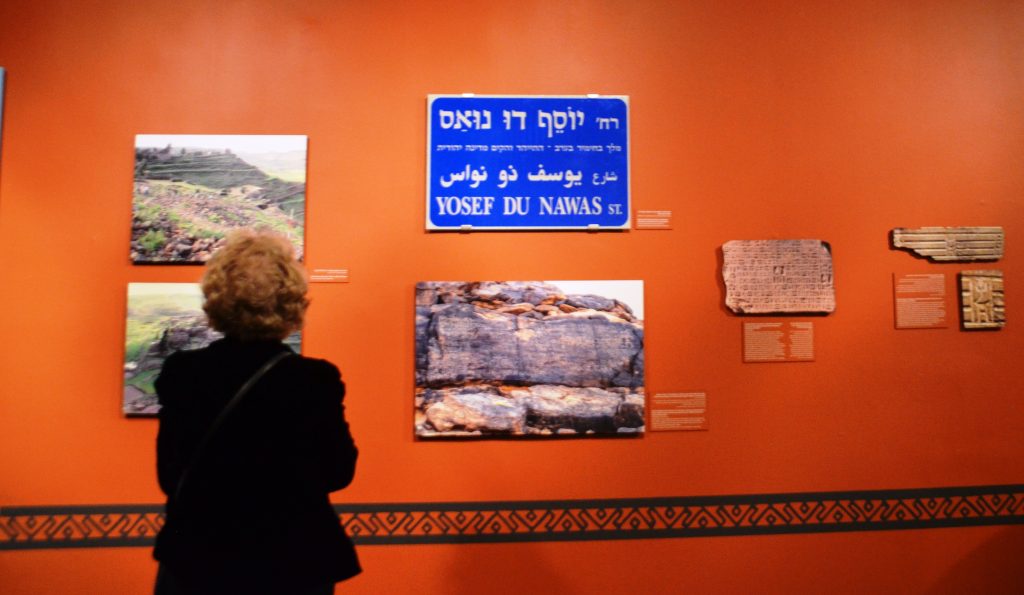 and more recent content, such as this Jerusalem Street sign, add to the scope of Yemenite history.

The father of Batya Borowski, wife of BLMJ founder Eli Borowski z”l, came from Yemen to Israel in 1907. Zacharia Jamil was a talented silversmith and jewelry-maker like his father.

The exhibit with its warm hues radiates the warmth and love Batya Borowski and her daughter,  BLMJ Director Amanda Weiss, have invested in sharing a history unfamiliar to many.

Three rings made by Jamil are included in the Yemen exhibition.

Fourth and last is the L A. Mayer Museum of Islamic Art, which also has a new temporary exhibition. 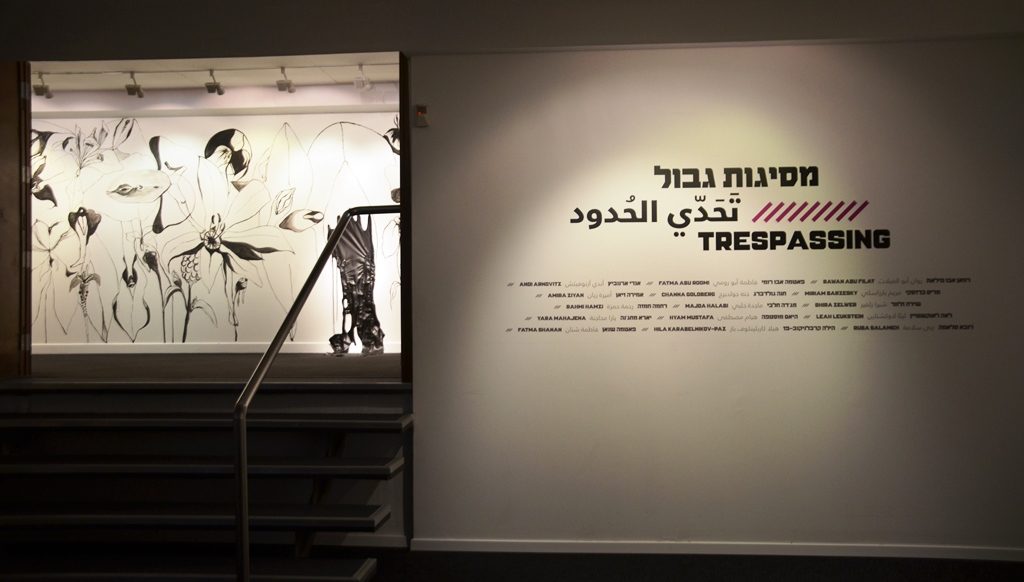 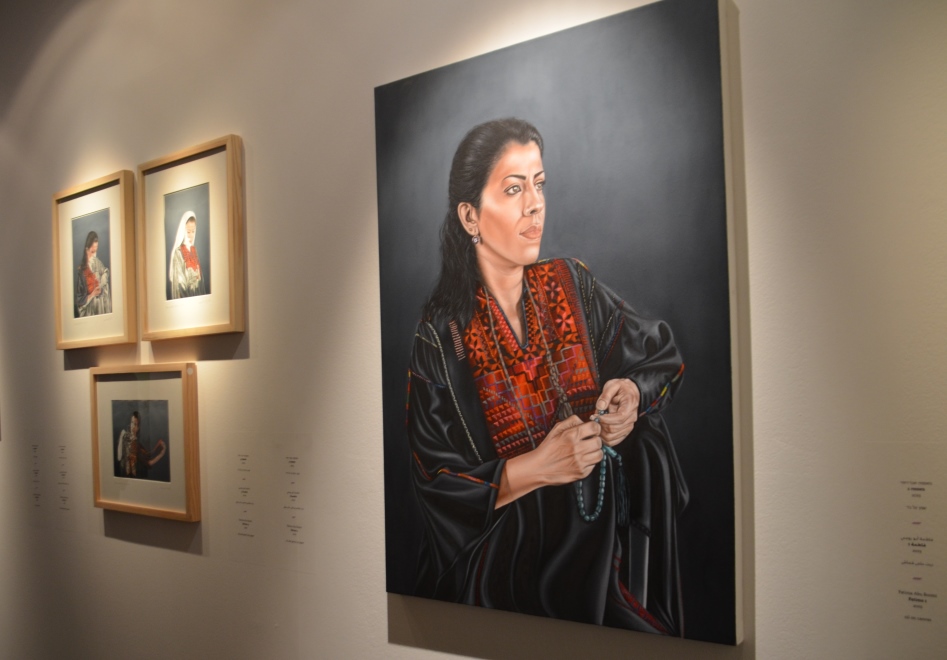 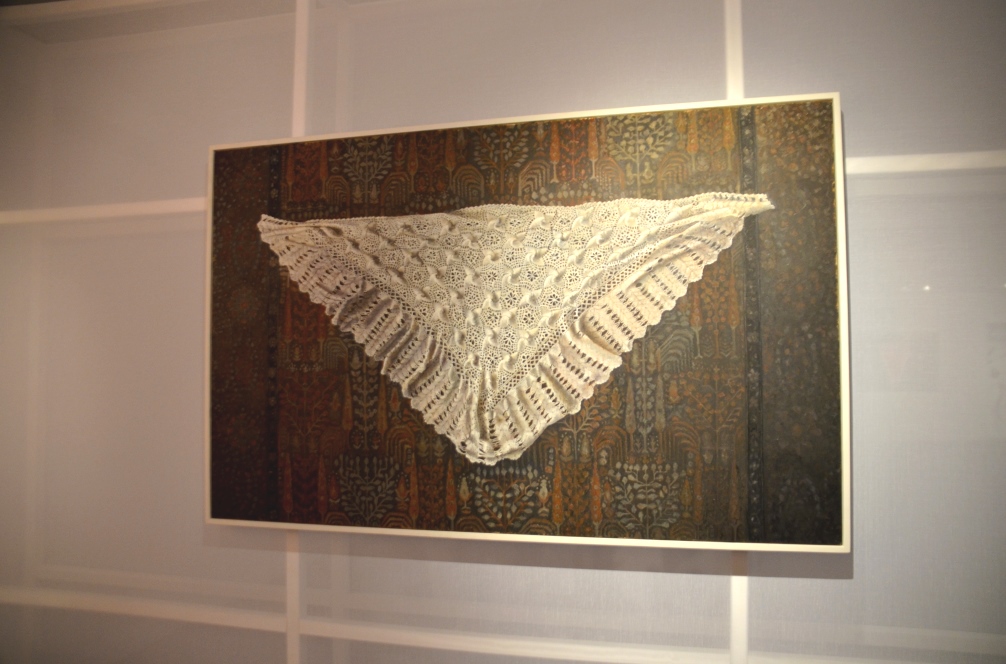 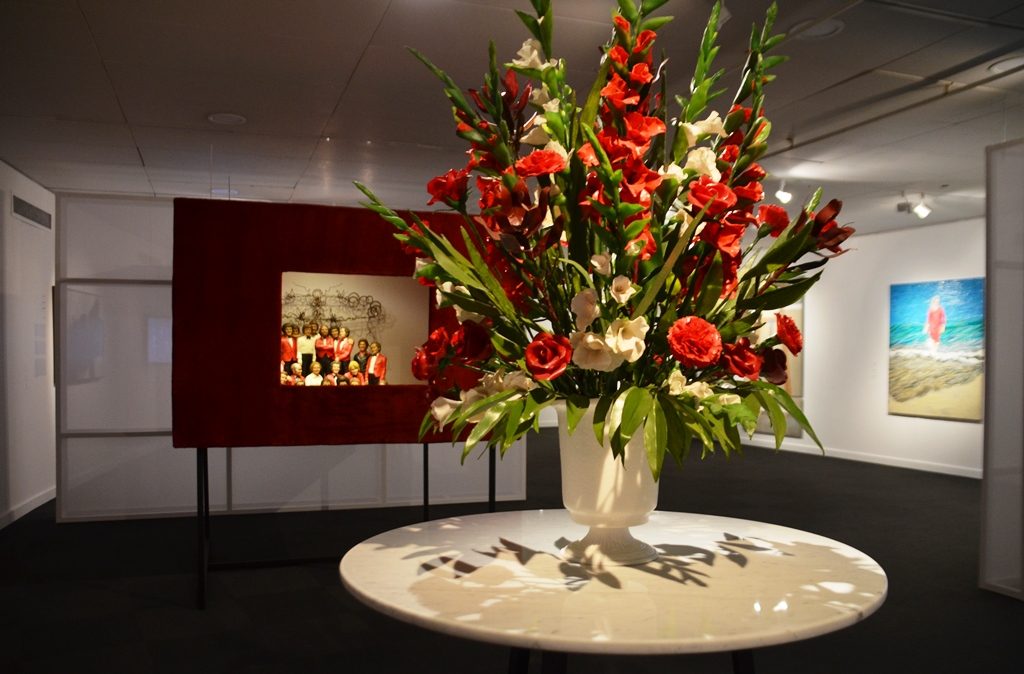 and Jewish -wax flowers and diorama.

The Museum of Islamic Art has historical pieces and a magnificent antique watch collection. 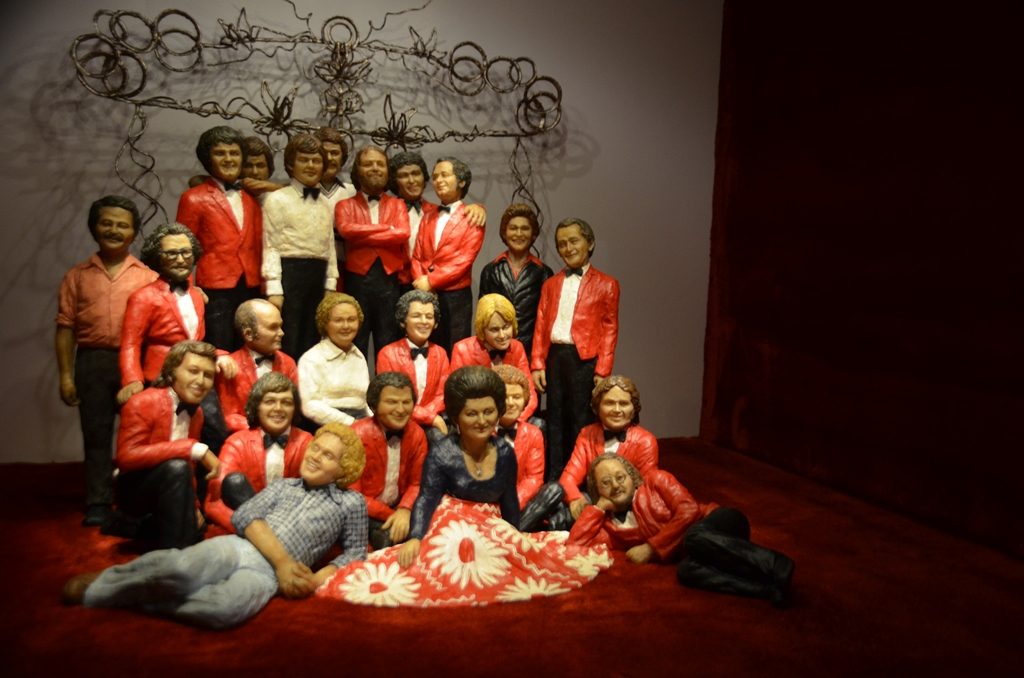 What stood out for me in the new pieces was this item. Shira Zelwer’s wax figures in the diorama are three-dimensional images reproducing a 1960’s photograph. They show her grandmother surrounded by the waiters of her catering business in Australia.

I fondly remember her grandmother in her later retirement years, still an active personality.

You never know what you will find on the Jerusalem streets or what memories in its museums. 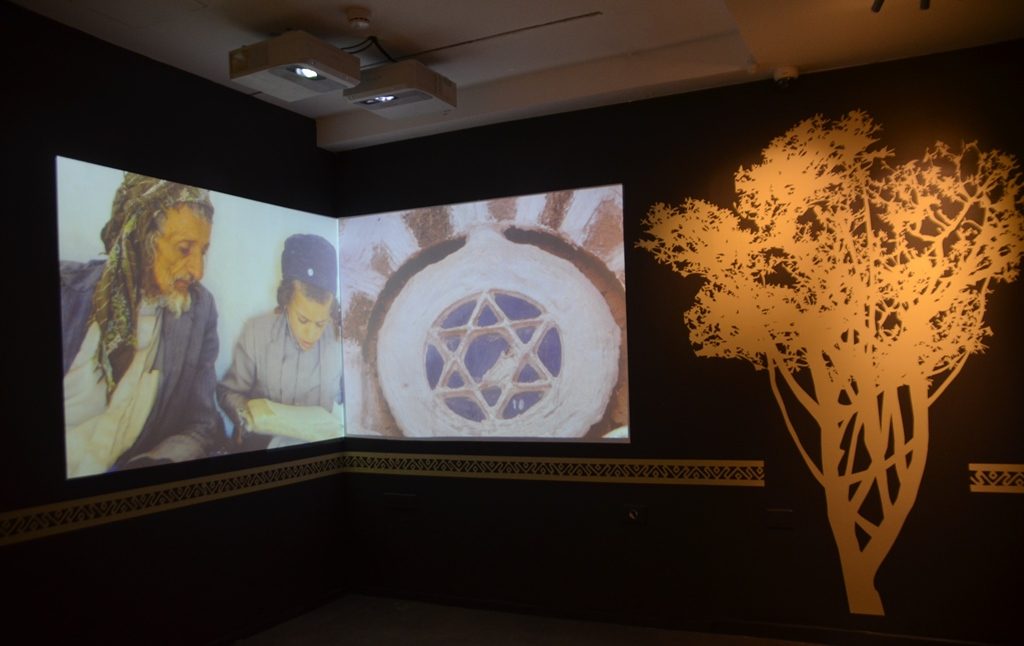 From ancient artifacts to futuristic technology, from Yemen to Australia, worlds coming together on the Jerusalem streets and explored and shared in its unique museum displays.