A one-day heatwave was enough in Jerusalem, Israel.

Cooling off in the evenings with breezes as the sun sets is the norm for summer.

I love it when visitors from Tel Aviv and overseas exclaim, “Oh it is so much cooler here.” 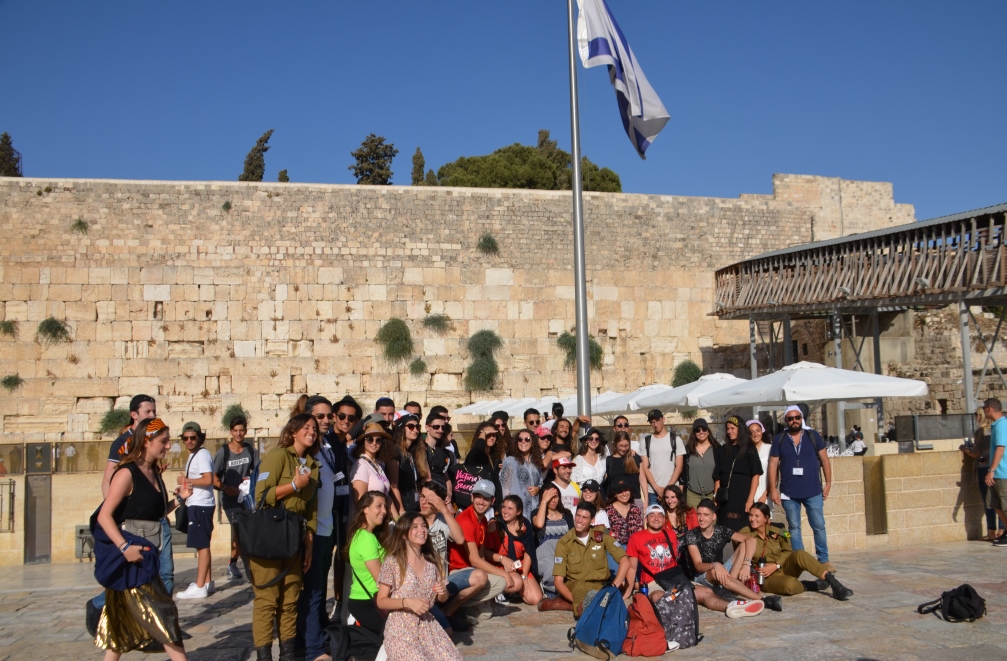 A favorite sight at a favorite site are the groups of young people on trips to Israel. 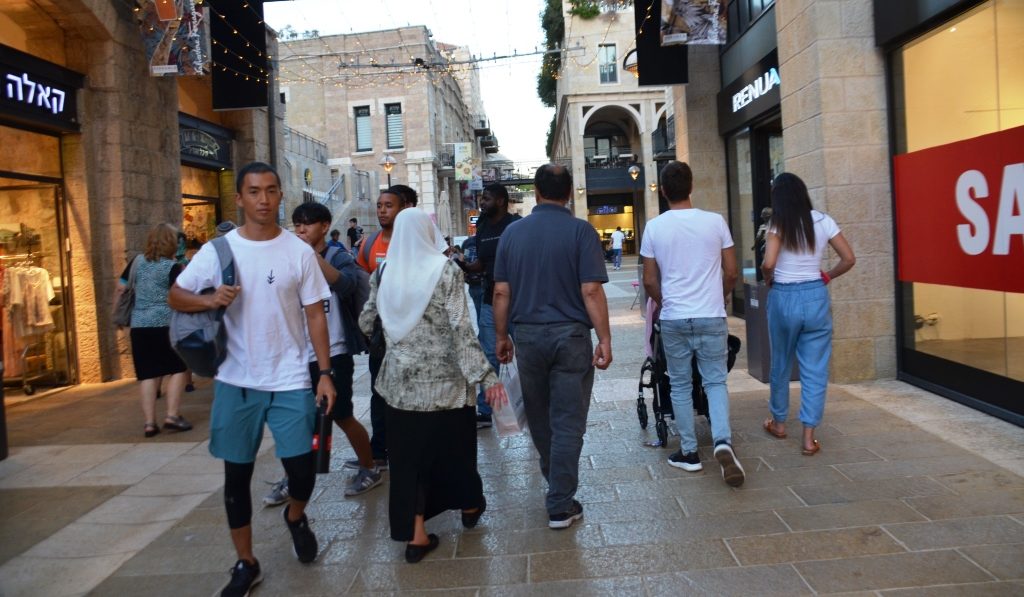 I hope they all stroll down Mamilla Mall, to see the diversity and the crowds, 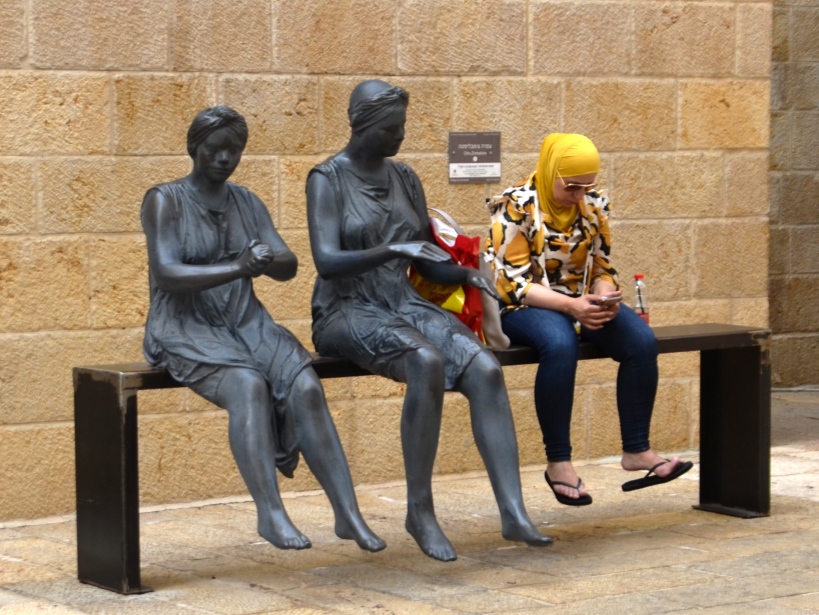 and the artwork which is rotated regularly to showcase new pieces.

At the end of Mamilla Mall, near Jaffa Gate, a sports event was held. 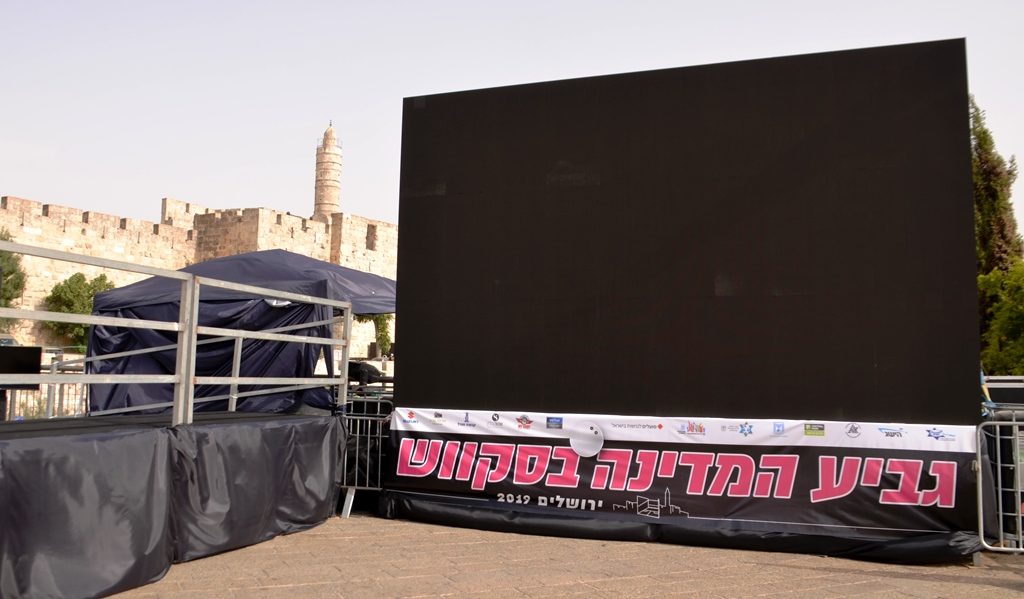 This time I could read the Hebrew that had stumped me in the past – סקווש – the annual Israel Squash Championship was held again near Jaffa Gate. 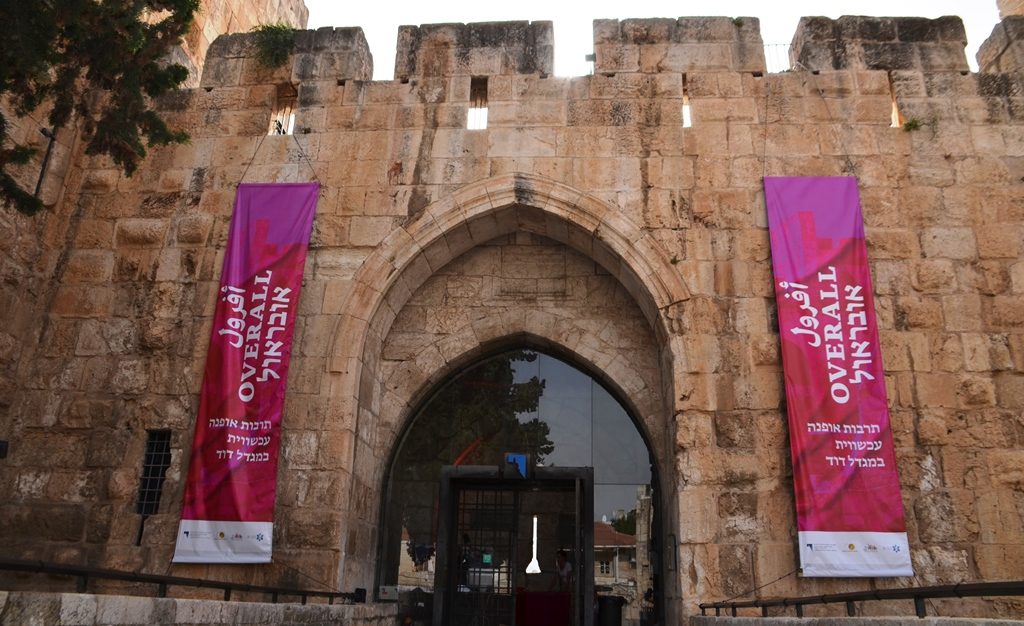 I was on my way to the Tower of David Museum for a special event called OVERALL.

This first-ever fashion event was way more than a fashion show. 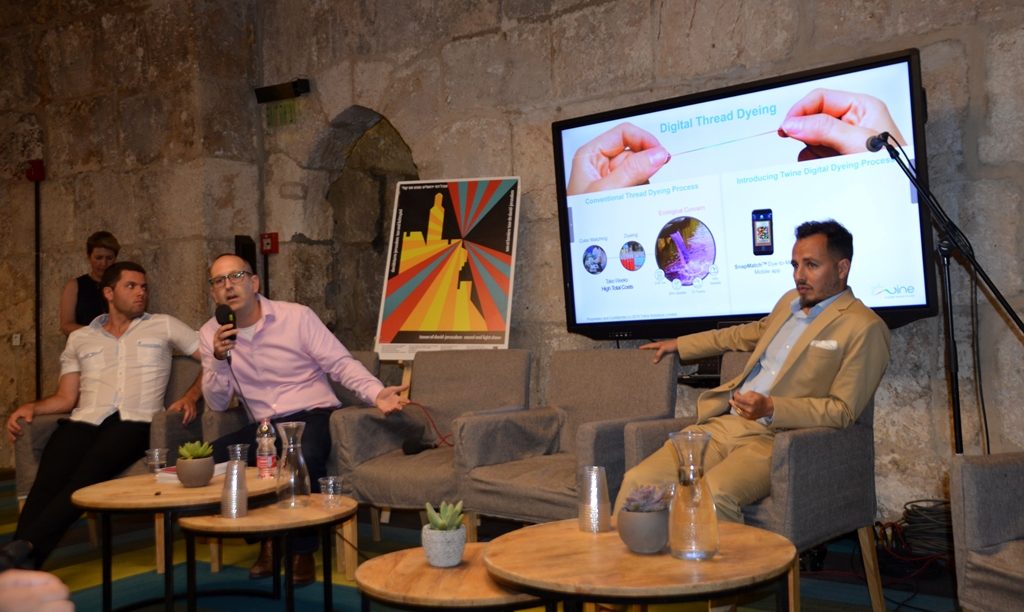 One of the many participants was explaining how Israeli hi-tech was changing the dyeing of thread, saving liters of water and time with each digital process. 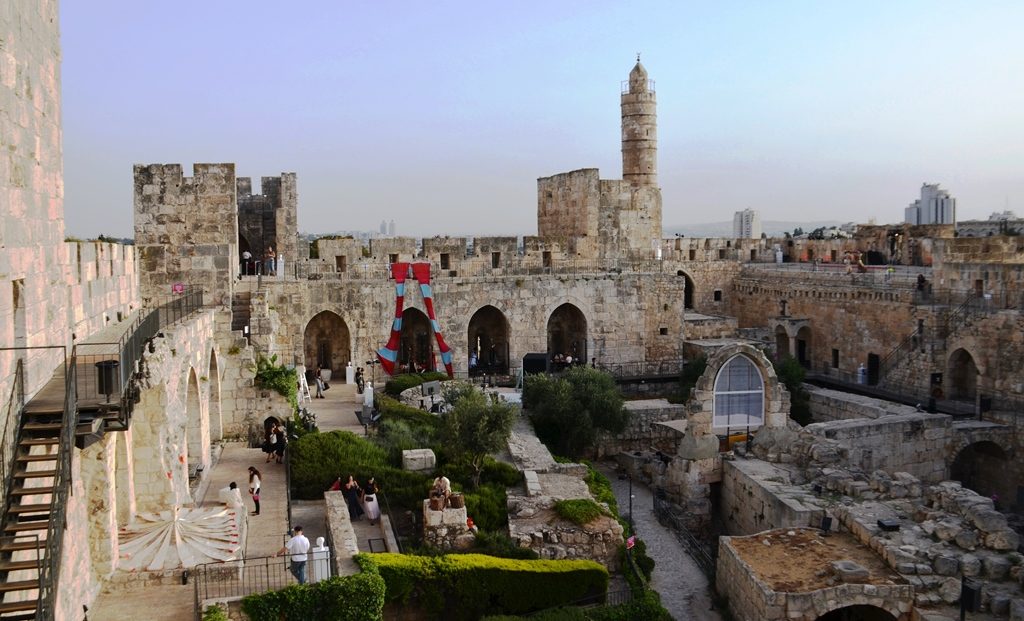 The Tower of David is always a favorite photo op of mine. 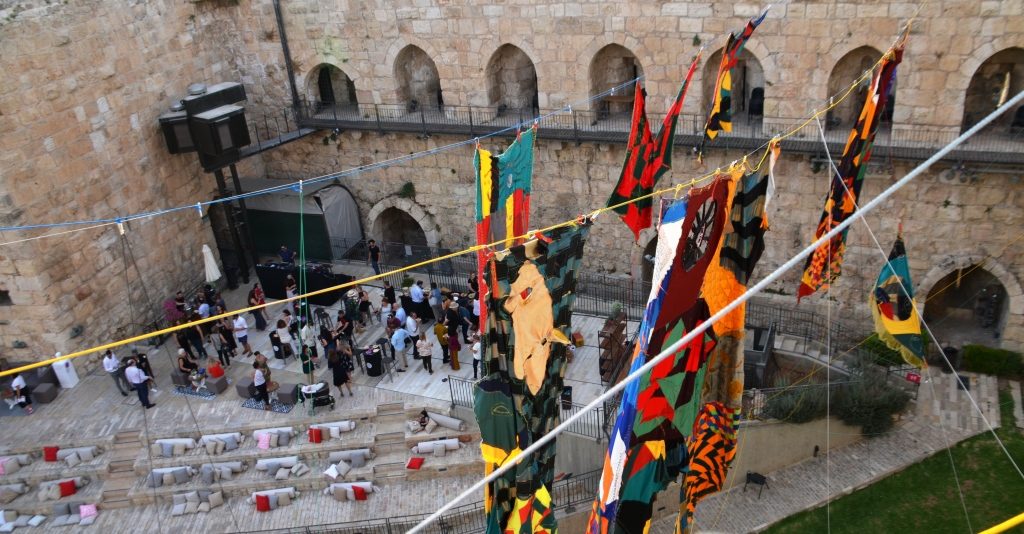 For OVERALL, there were 20 locations throughout the complex with special exhibits. 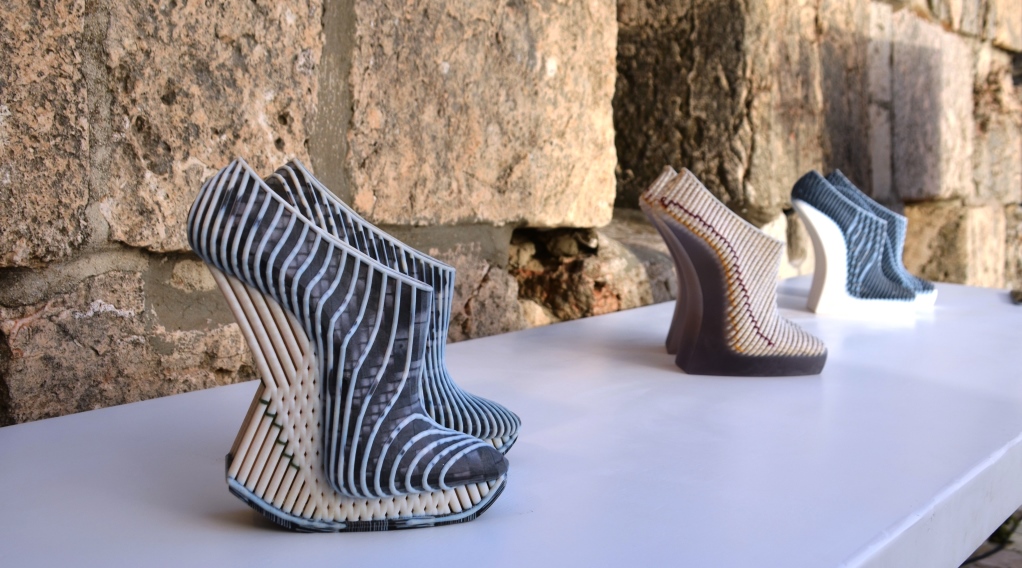 These shoes made by a 3D printing process were displayed next to the 4,000-year-old stones.

Jerusalem, where the ancient and the future come together in new ways. 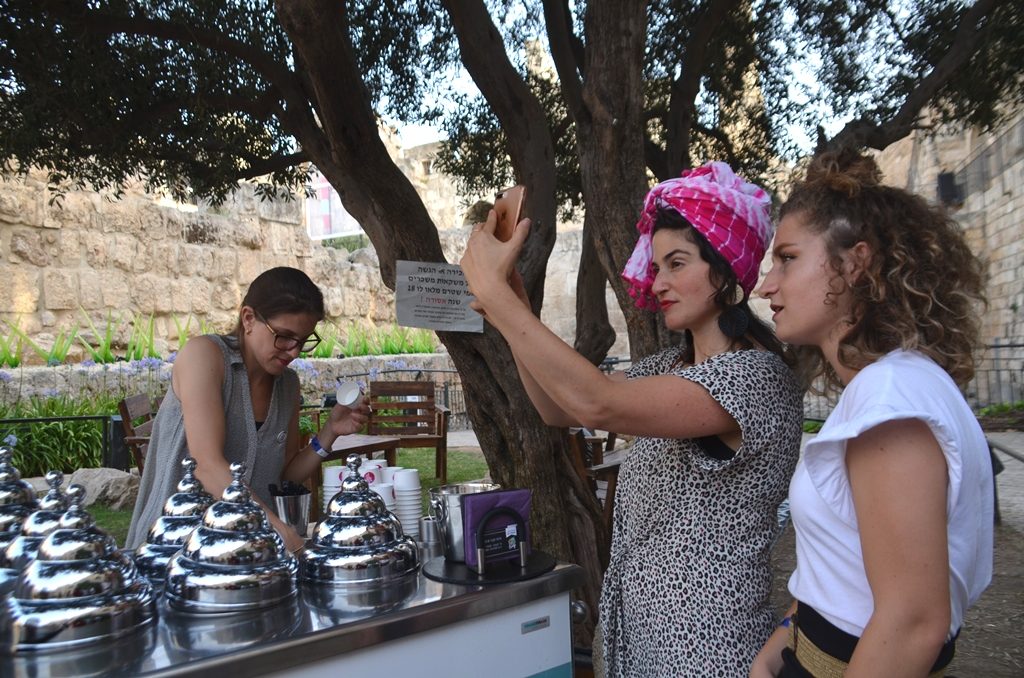 Headwraps were one feature. These two young women admiring a new look were standing next to the ice cream stand. The sign on the tree said only for 18 and over. After the second scoop of the alcoholic ice cream which was so good, I had to sit down. 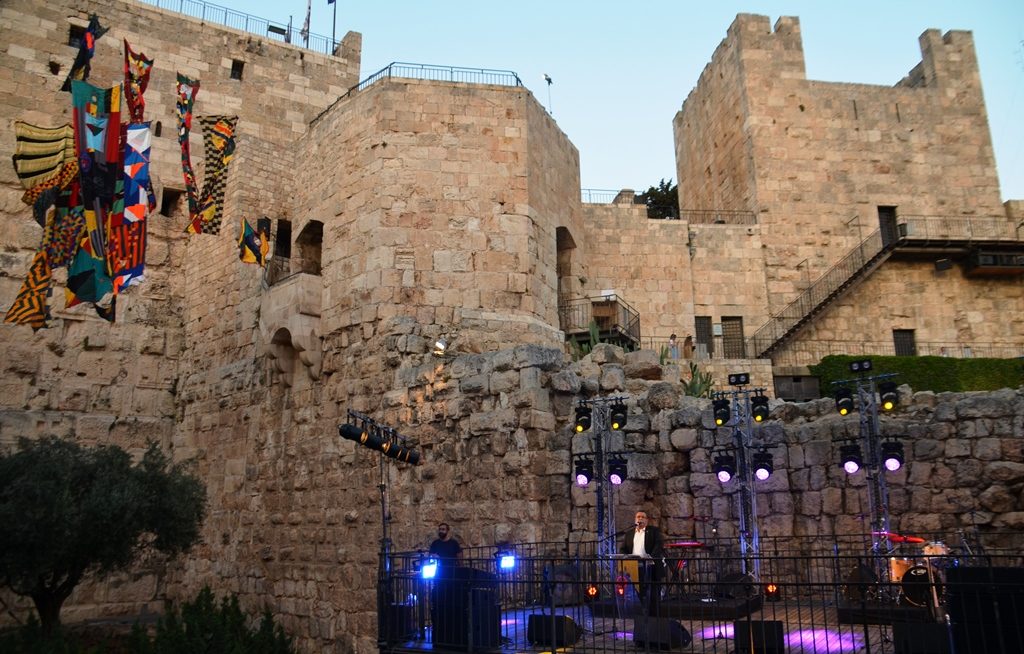 Good timing. Jerusalem Mayor Moshe Lion was one of the speakers opening the program. 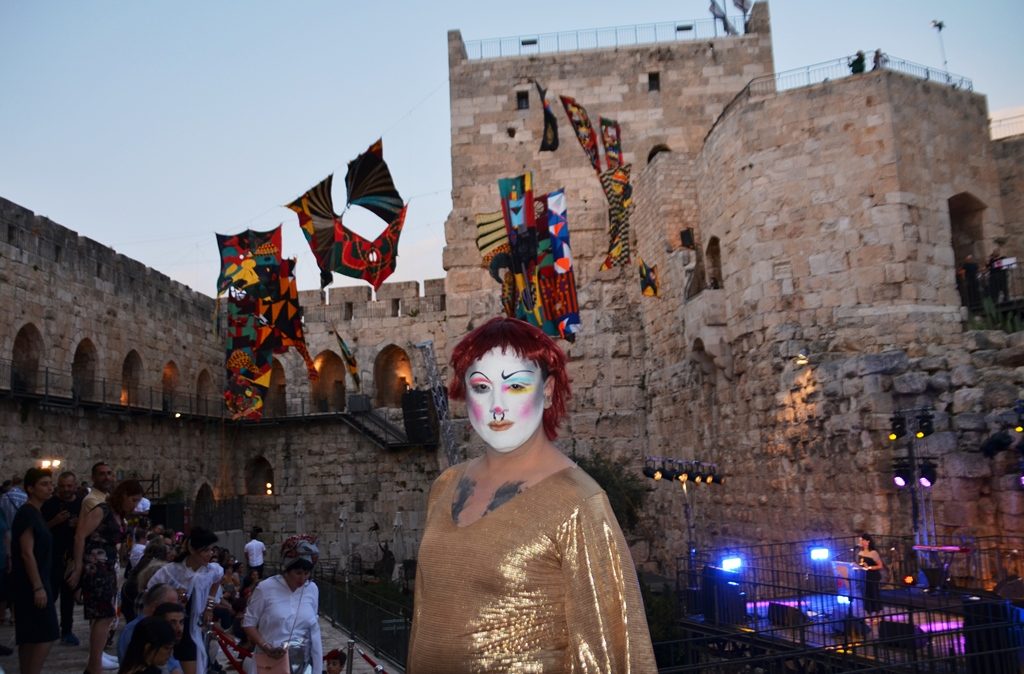 As the sun was setting, more people came and costumes appeared. 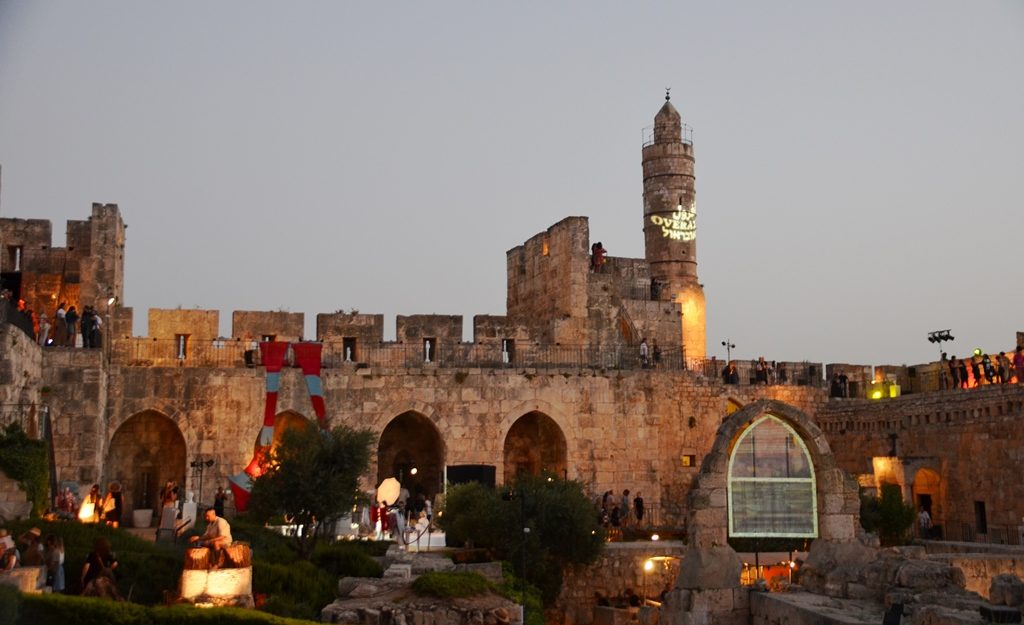 The lights went on outside as it got dark and programs began inside. 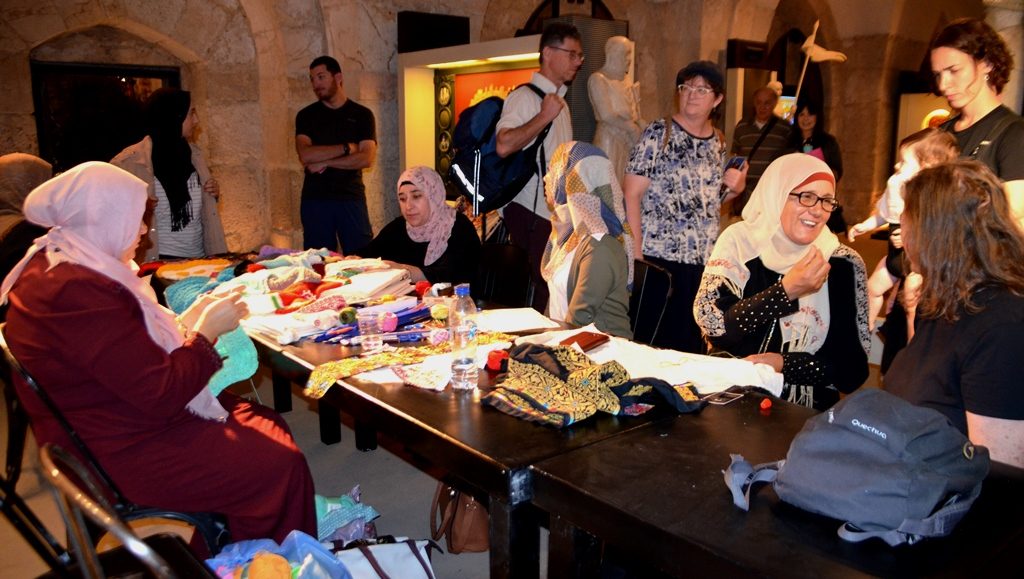 Arab women were showing and sharing their embroidery skills in one exhibit hall. 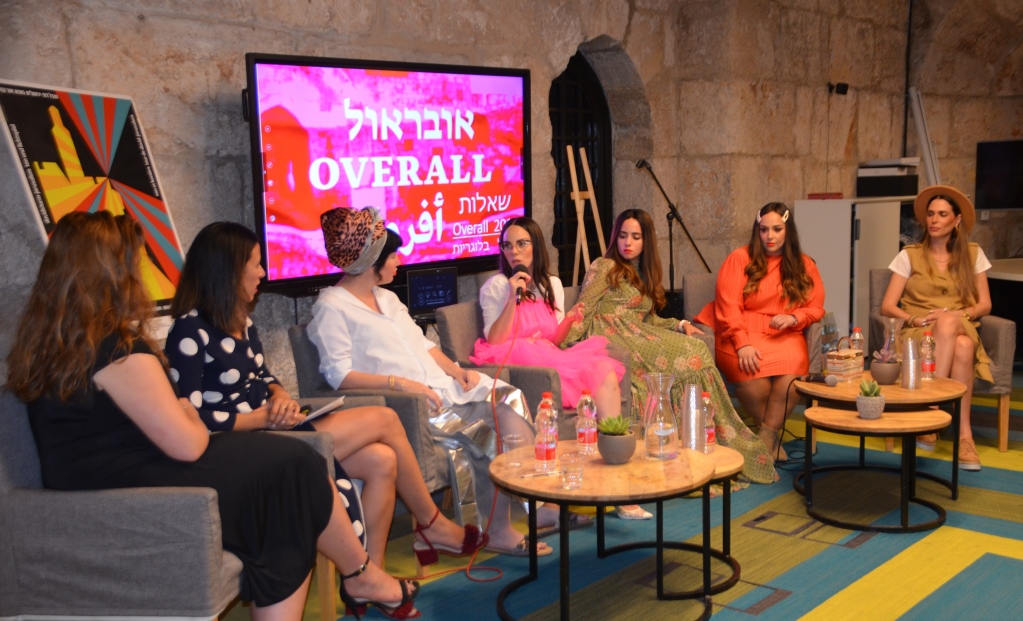 And up in the Innovation Lab, a panel of Jewish women were discussing their Instagram and social media successes. 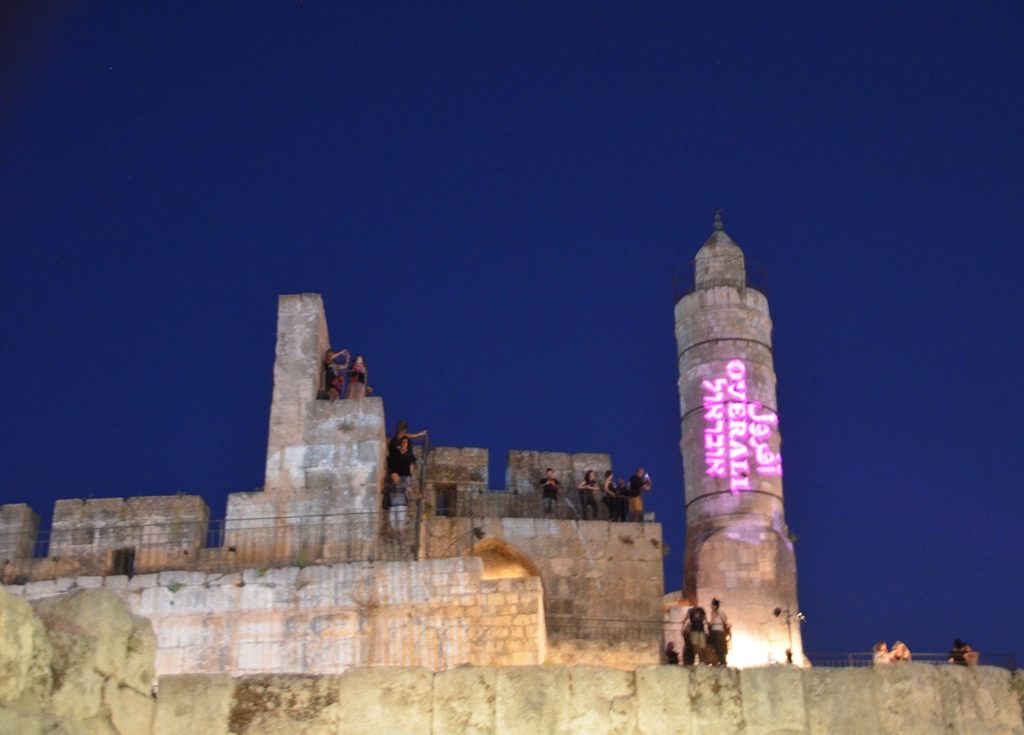 People climbed to the heights of the ancient fortress to see and participate in shoe-making, weaving, modeling, and much more. 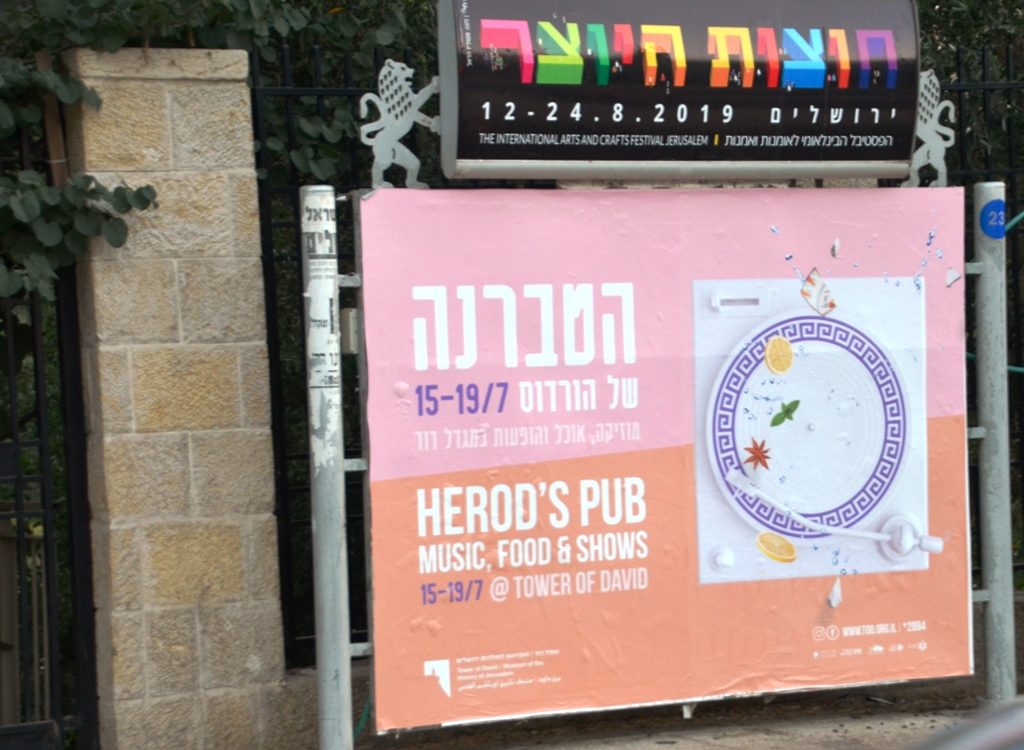 From August 12-24, the annual International Crafts Fair will be held nearby. 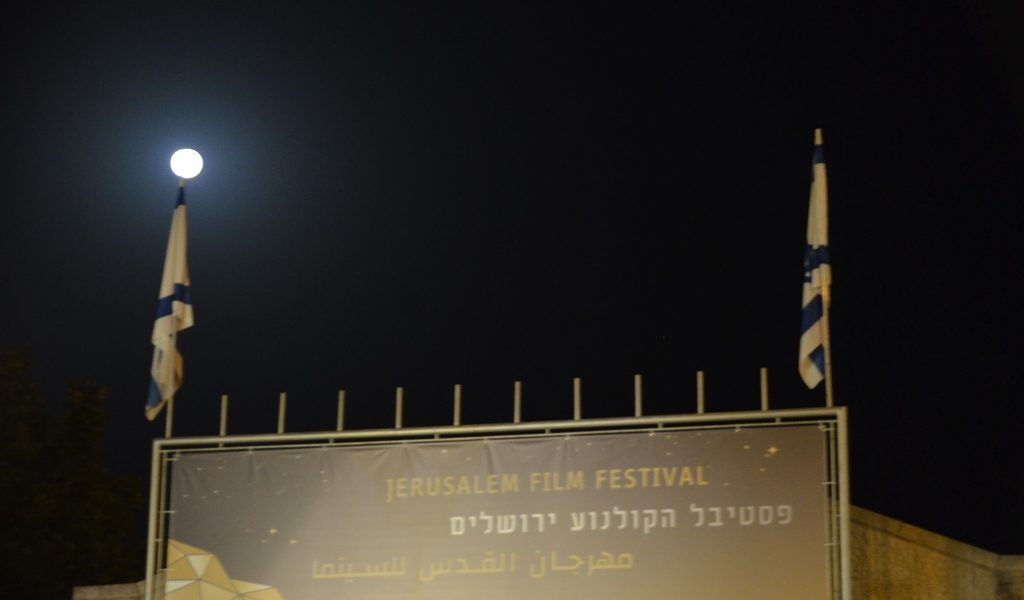 As the full moon shone brightly overhead, the Jerusalem Film Festival sign was displayed at the Cinematheque. 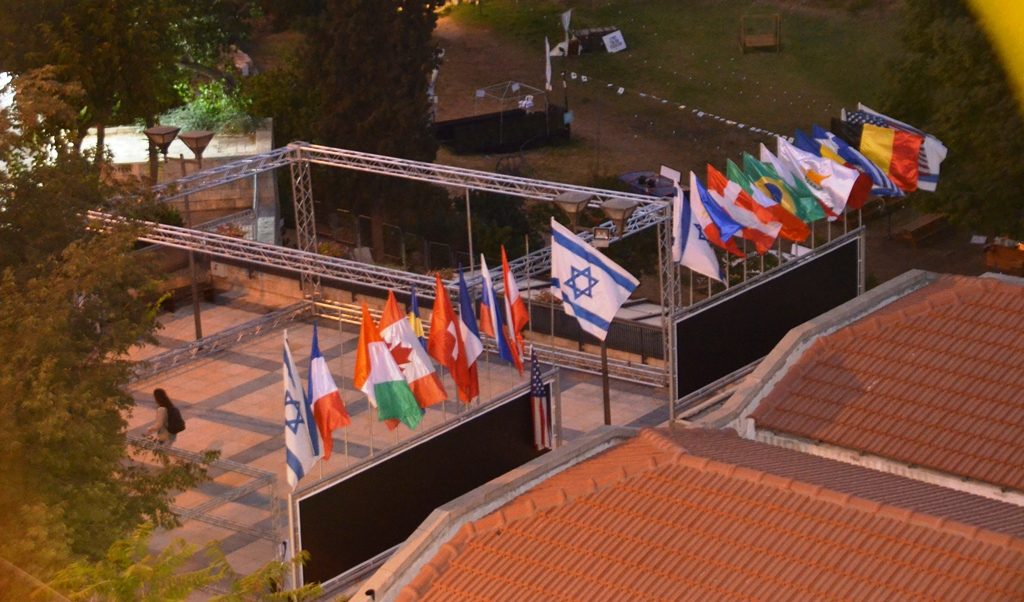 But only this week did the international flags go up for this annual summer film event. 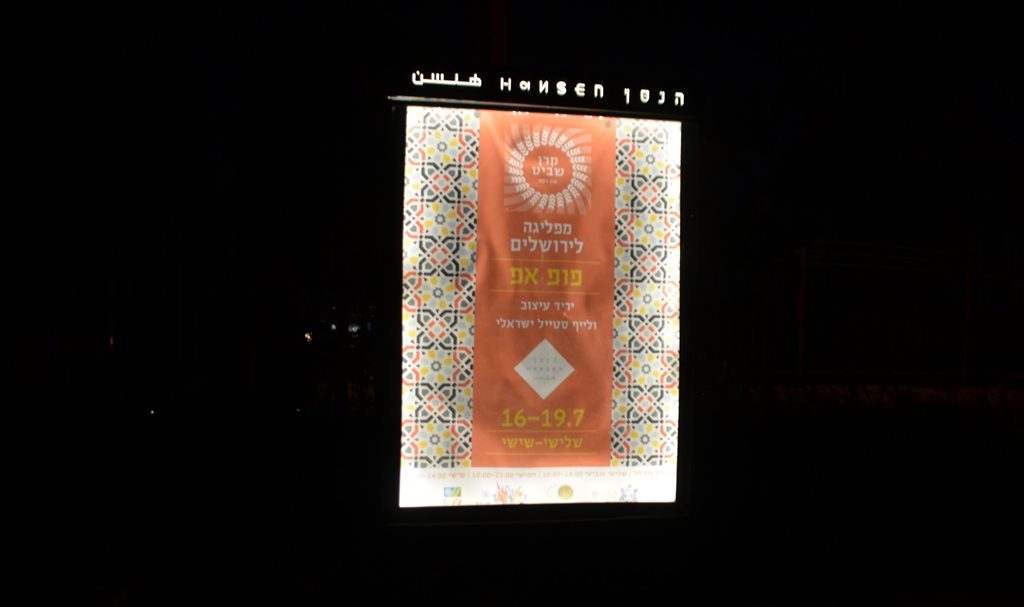 Hansen House had a popup festival on July 16-19.

As I came home there were fewer cars parked near the Jerusalem Theater.

There are fewer musical events as the three week period of mourning before the Tisha B’Av fast day has begun.

But not to worry, it is Jerusalem so there has to be a festival. 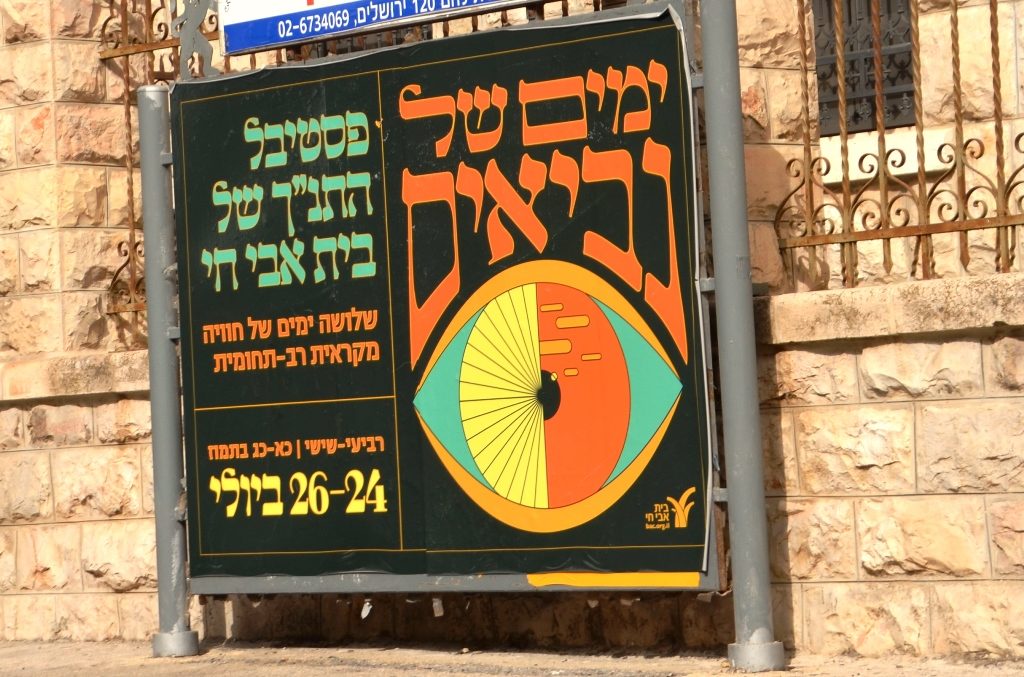 This sign announced the “Days of the Prophets” at Beit Avi Chai from July 24-26. 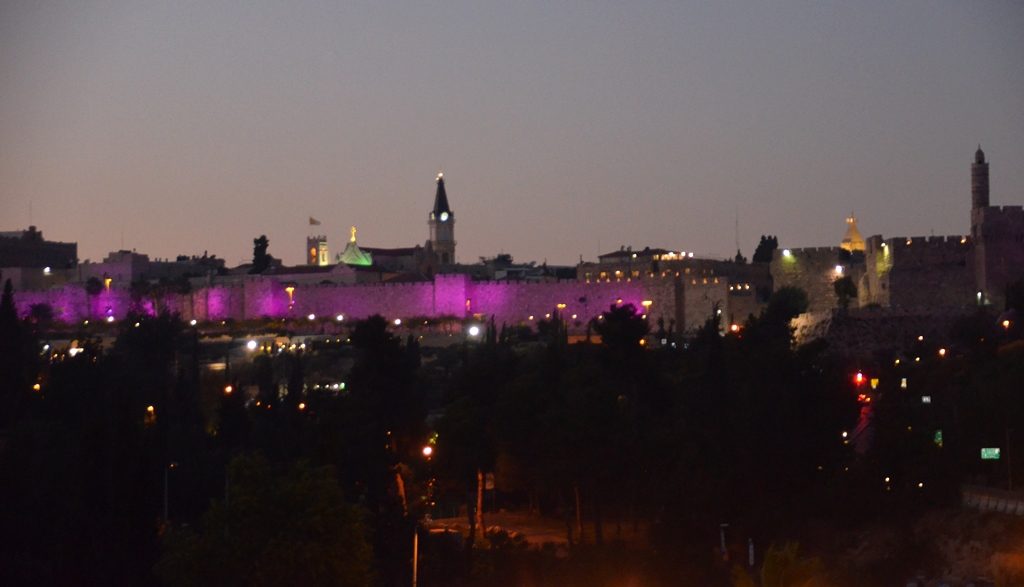 Israel was ranked in the top ten innovative countries.

Always something new and colorful happening on the Jerusalem streets.