What a busy holiday season!

It was impossible to do everything I wanted,

however, here are some of my favorites

from the week of Sukkot. 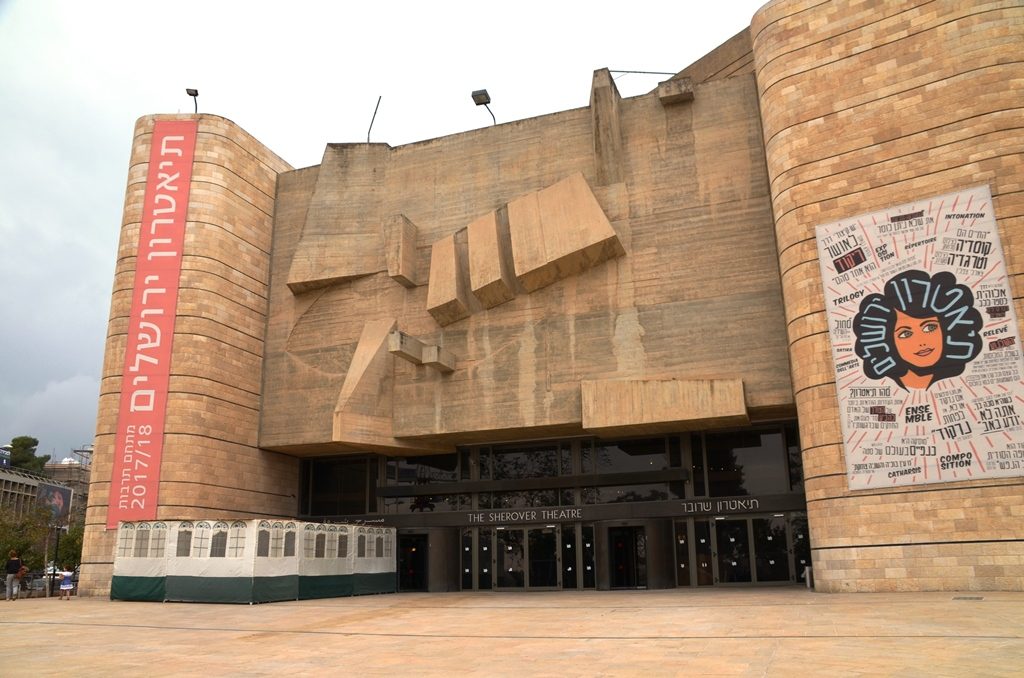 I love that there is a sukkah outside the Jerusalem Theater.

Since getting painted a few years ago, 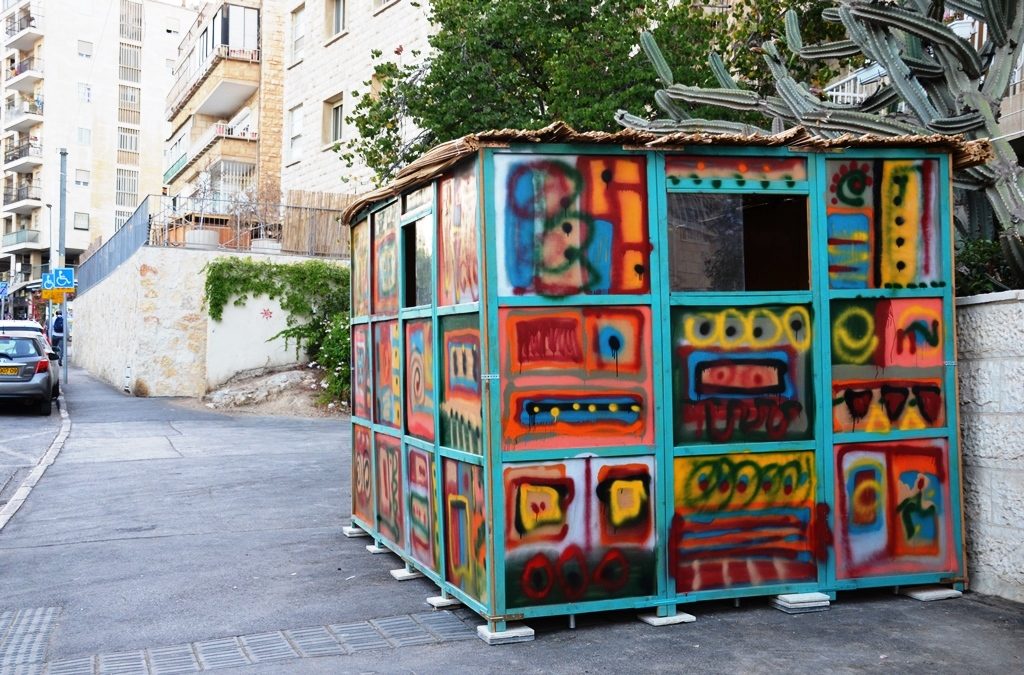 this sukkah has become a local landmark. 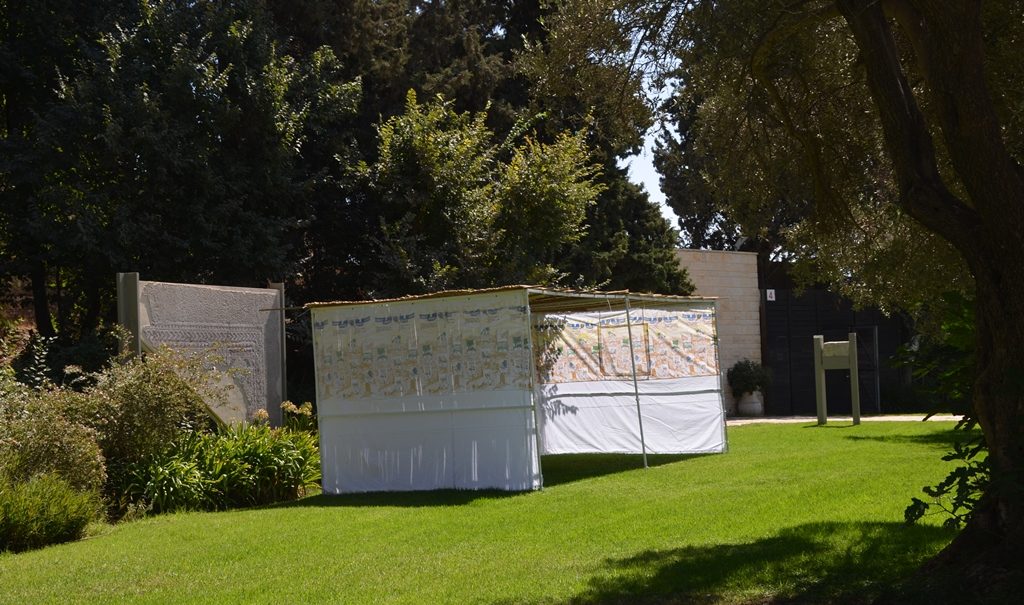 This one was at Beit Hanasi,

the Israeli President’s Residence, but 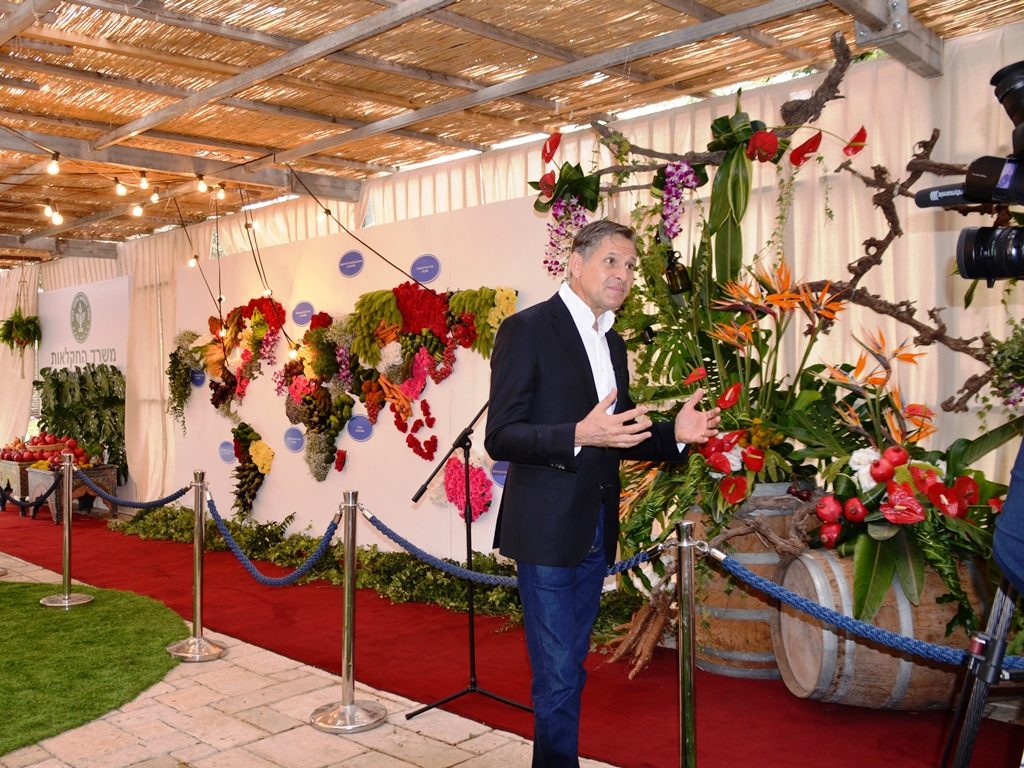 this one with a population map of the world.

Made of Israeli flowers, fruits and vegetables,

it was so colorful and a perfect set for this TV reporter,

before the public arrived to pass through.

Sukkot in Israel is an agricultural festival. 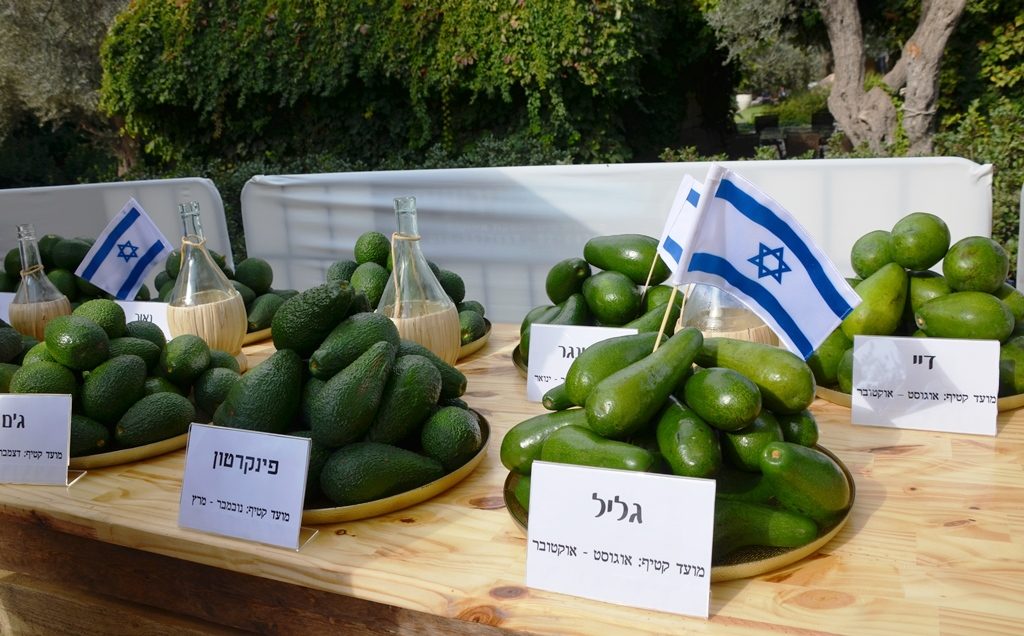 These varieties of avocados were one of the many

agricultural products that were featured. 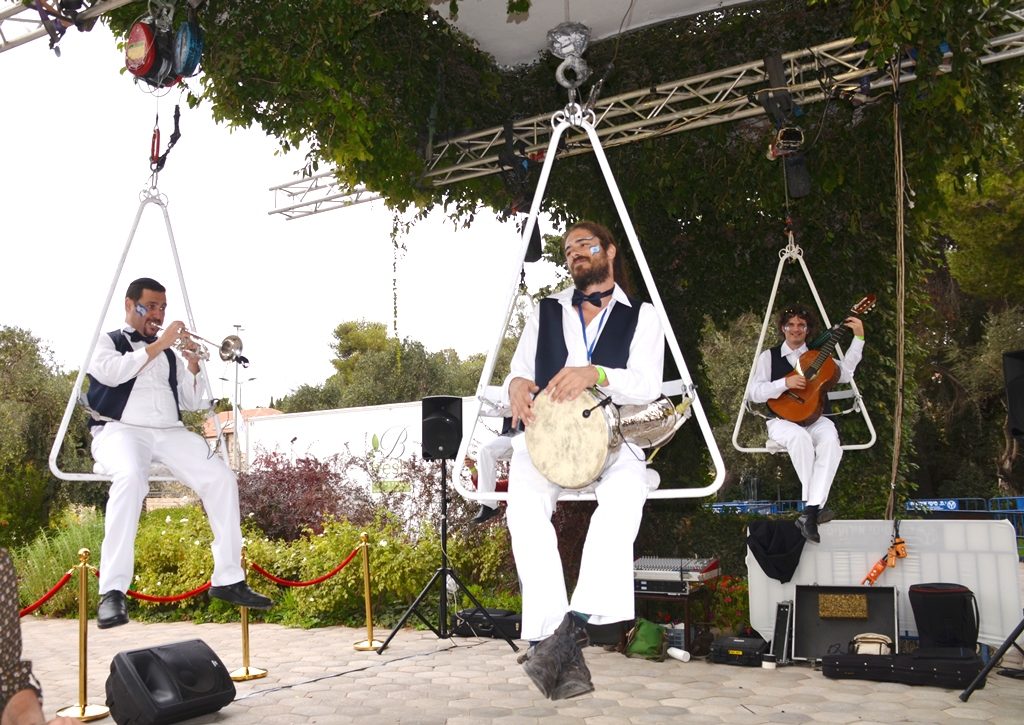 These musicians were floating on giant swinging triangles, 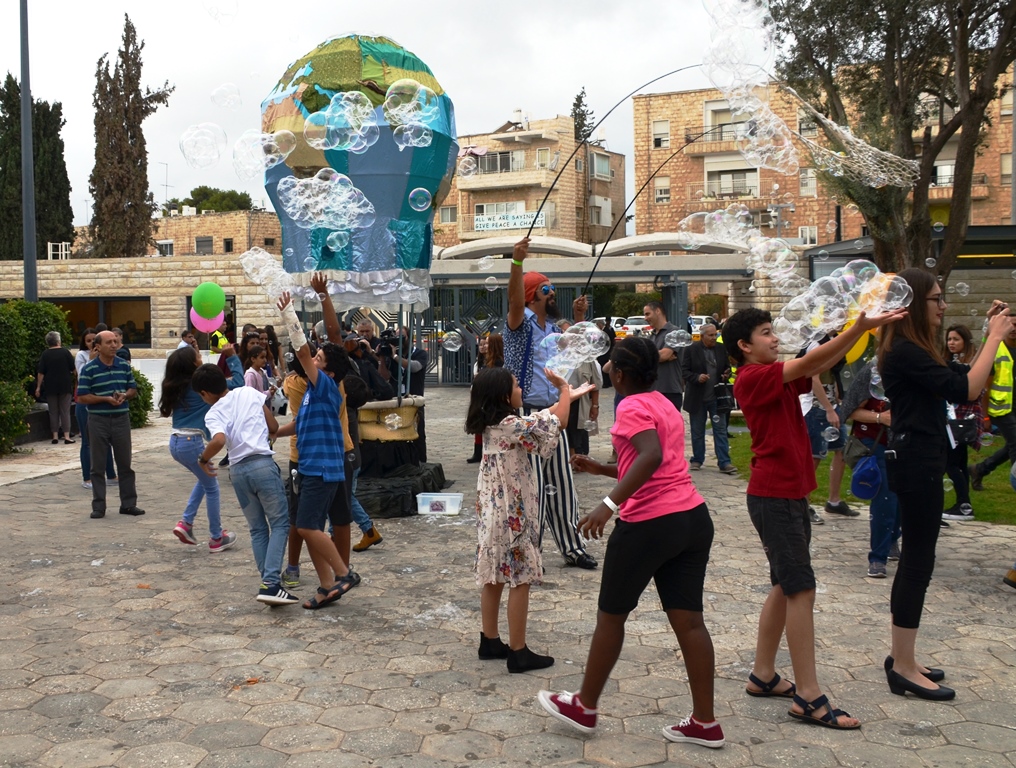 and giant bubbles were also part of the entertainment.

But the real crowd pleaser seemed to be 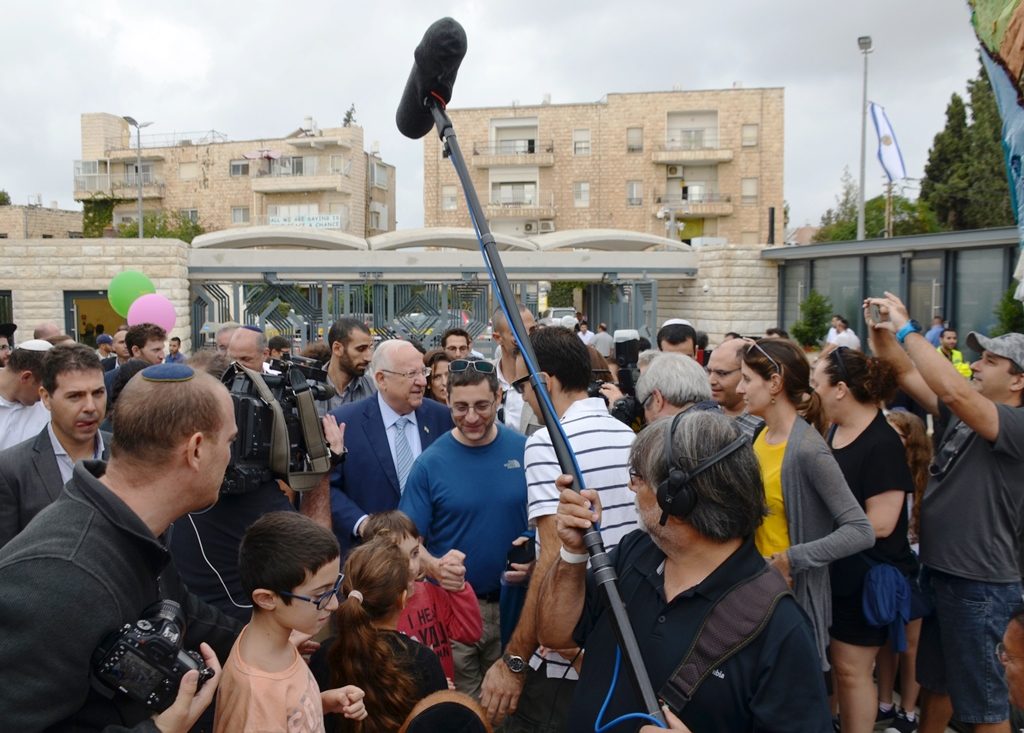 when President Reuven Rivlin did a walkabout.

Cameras and families crowded around

as he made his way through the gardens.

The skies were already grey at the time

and the photos a bit dark,

but I was able to leave 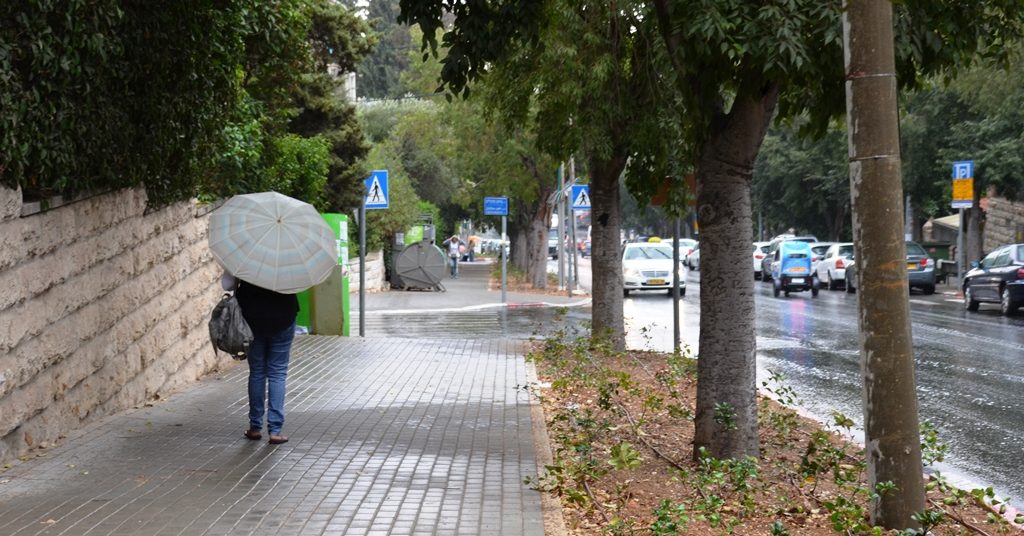 really hard rain, the first of the season.

Who would have imagined? 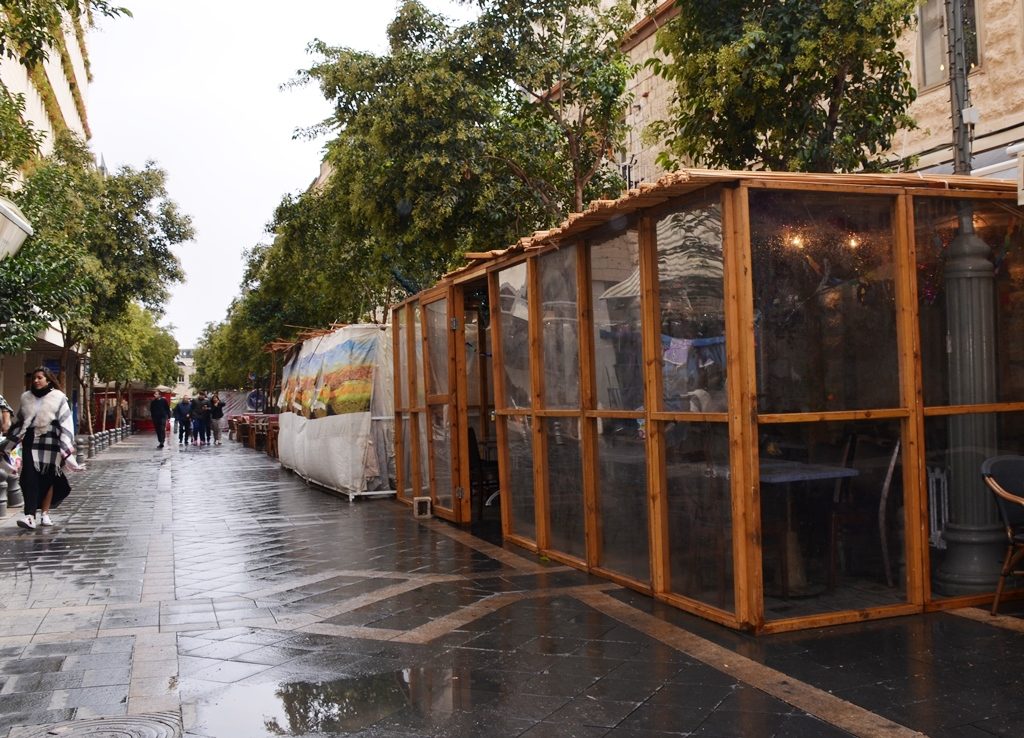 The streets filled with water.

People disappeared from the streets and sukkot,

as the water poured down. 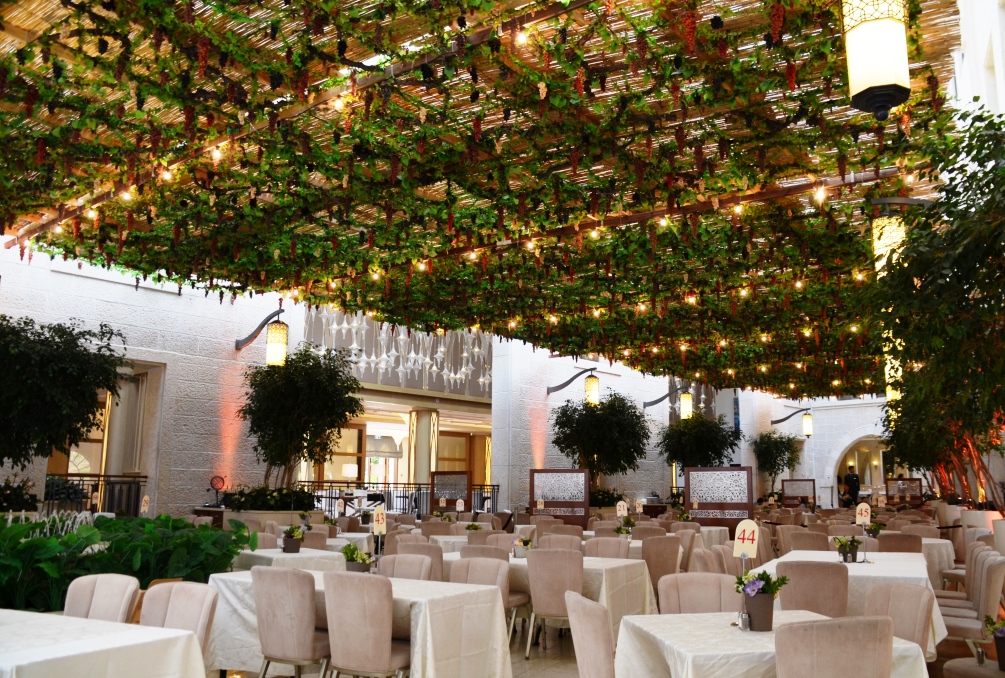 The atrium sukkah at the Waldorf-Astoria was dry,

since the windows above the schach were closed in time

to keep the large dining area dry and pristine. 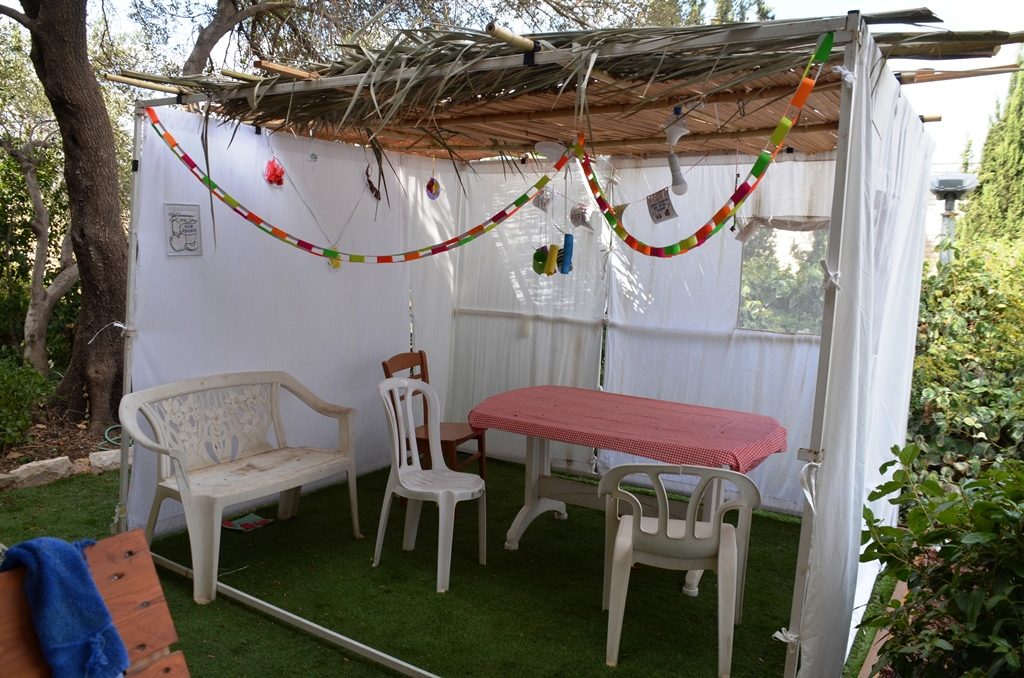 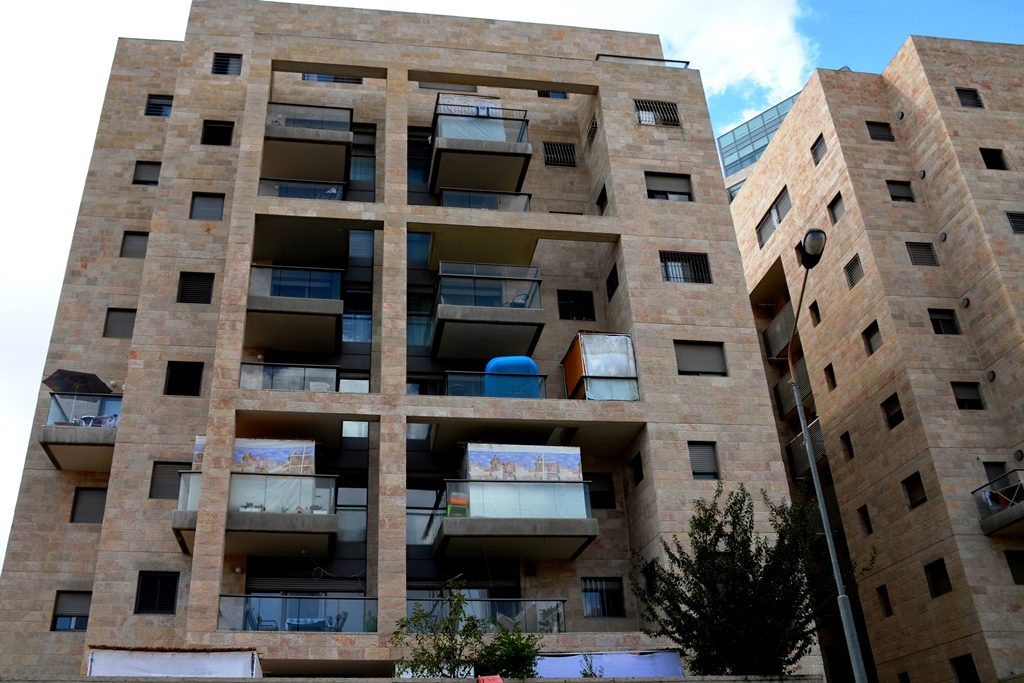 and all these on the side of this building,

are a few new ones to add to past favorites.

The Kite Festival at the Israel Museum 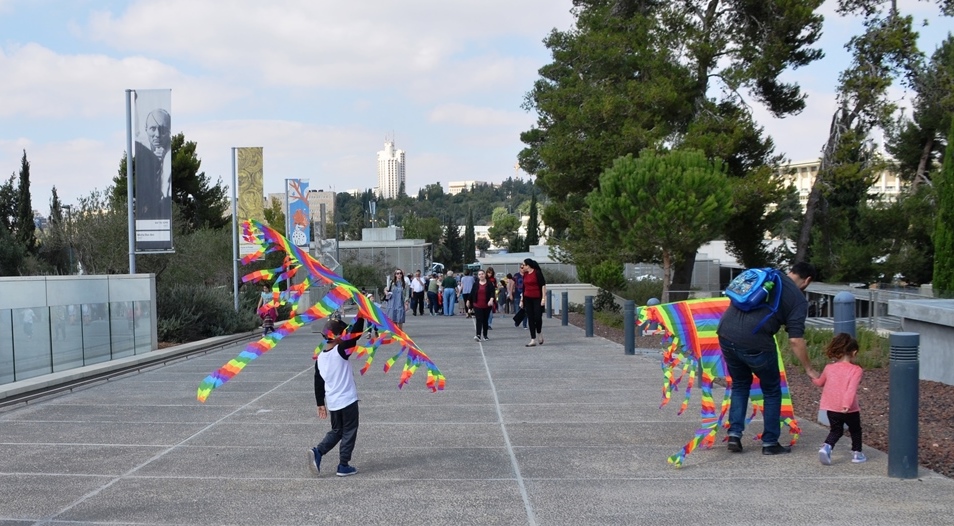 has become an annual holiday event. 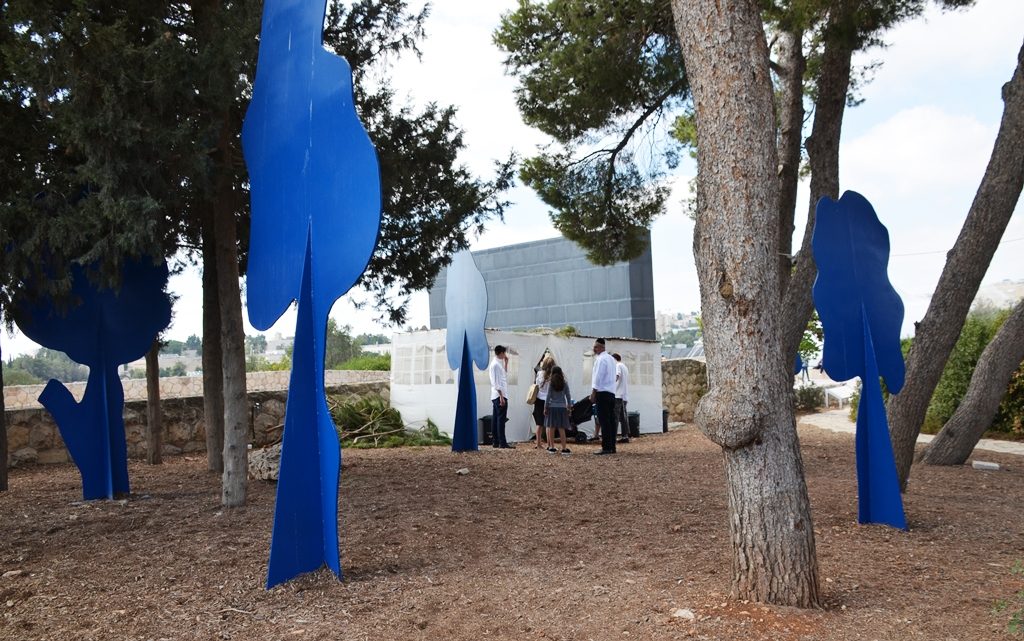 Again a sukkah for visitors’ use was set in the

the blue ‘Trees” of Menashe Kadishman. 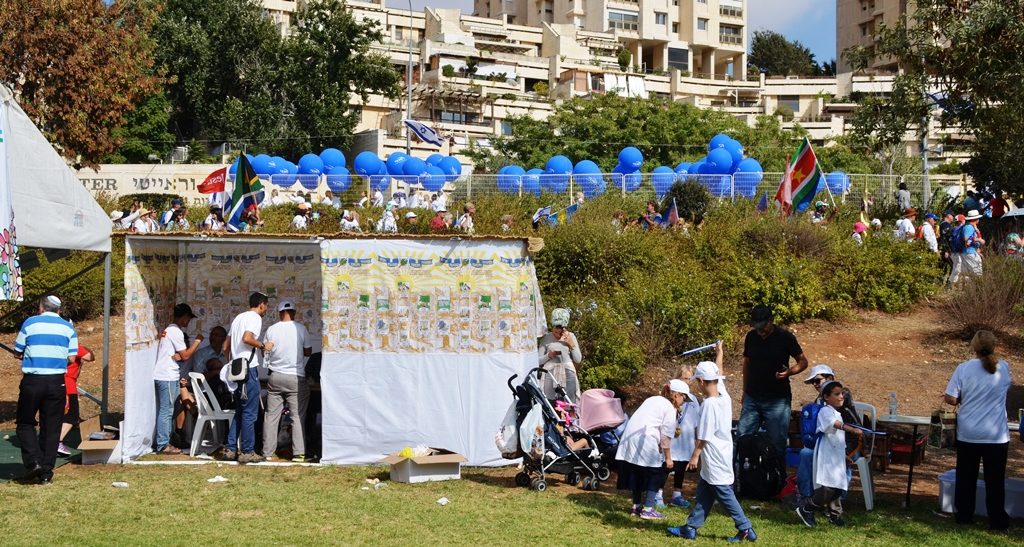 a sukkah was up for use in the park for

The weather was perfect that day, 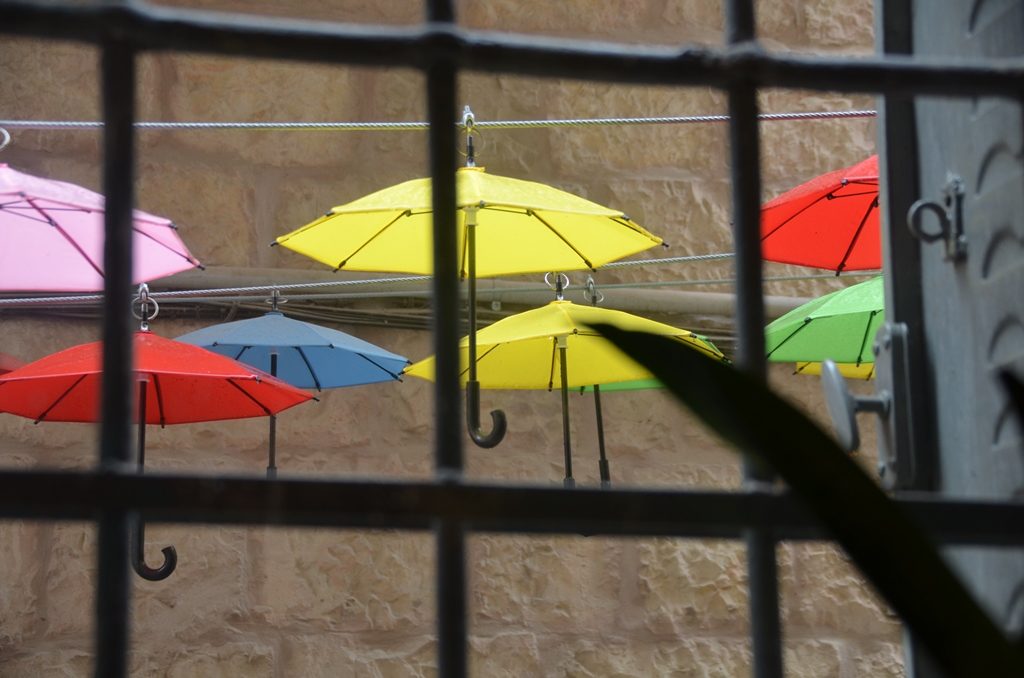 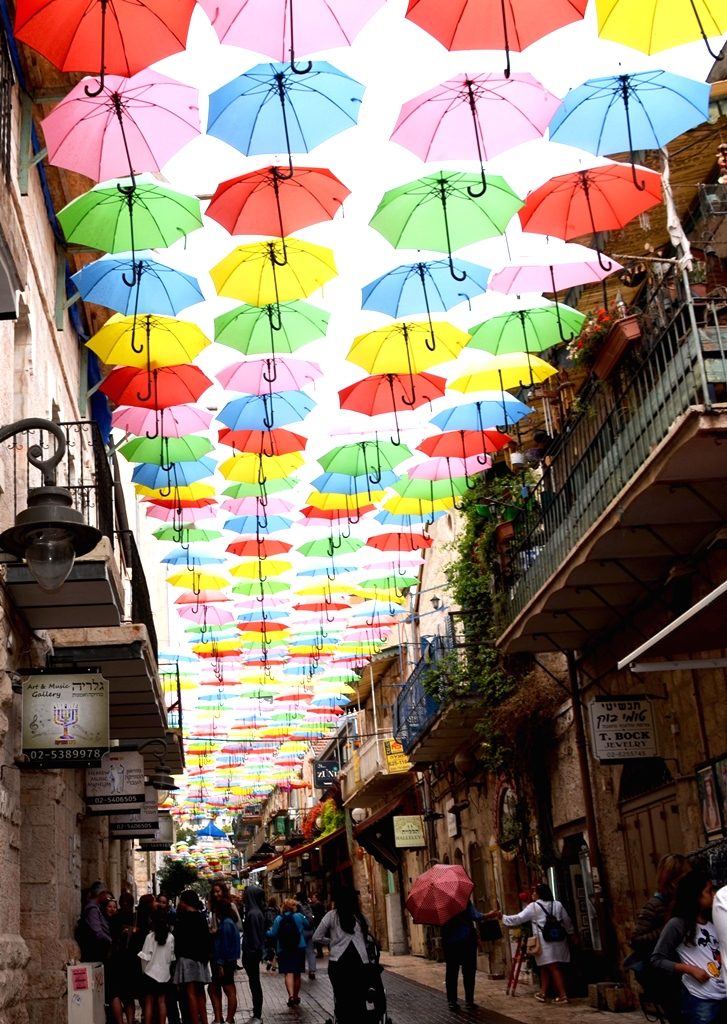 as a popular display for visitors.

The Women Wage Peace rally to be held

in Independence Park got rained out,

the park was empty from the morning’s heavy rain.

New at First Station for this holiday season, 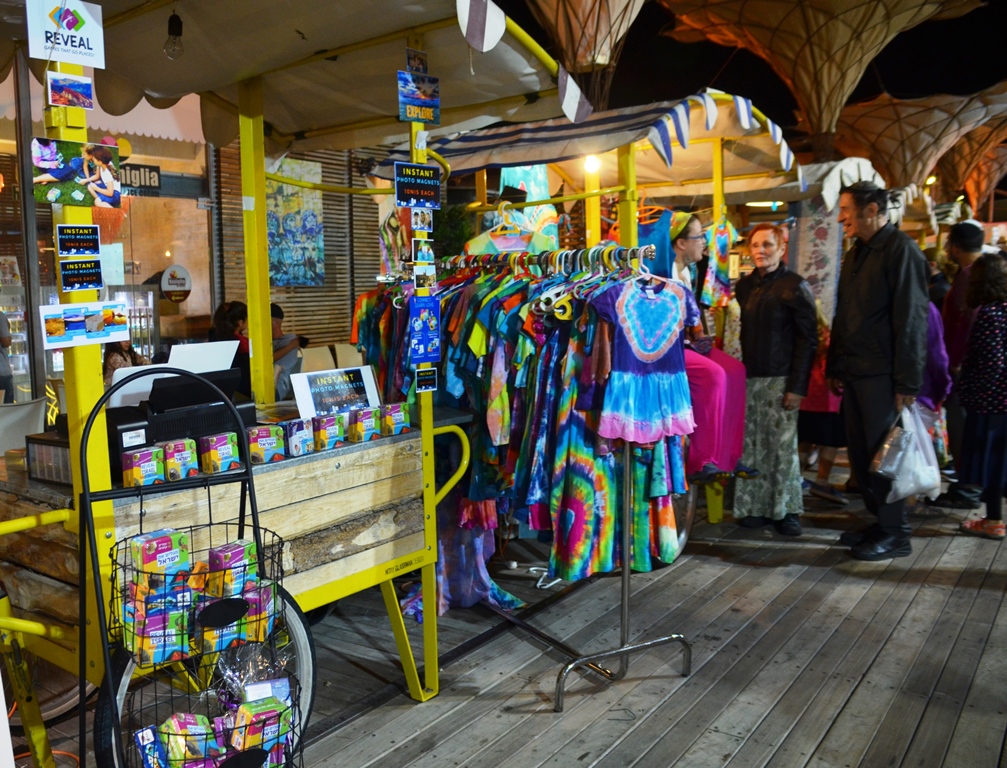 were the SheSparks displays of quality gifts.

Watch out for more from these talented women. 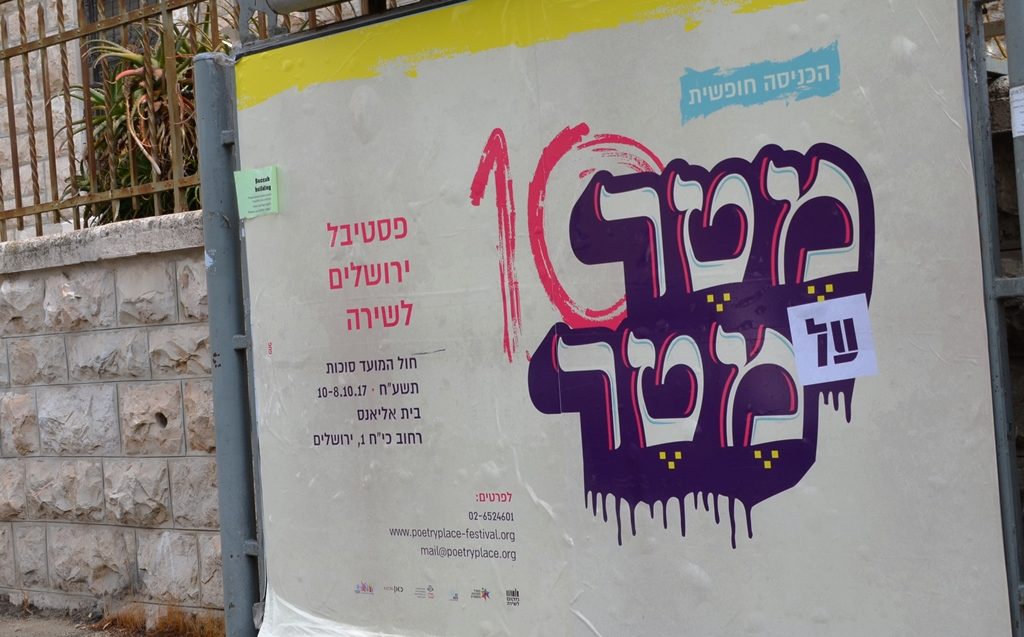 Song and music and dancing,

filled the Jerusalem streets in too many locations to mention. 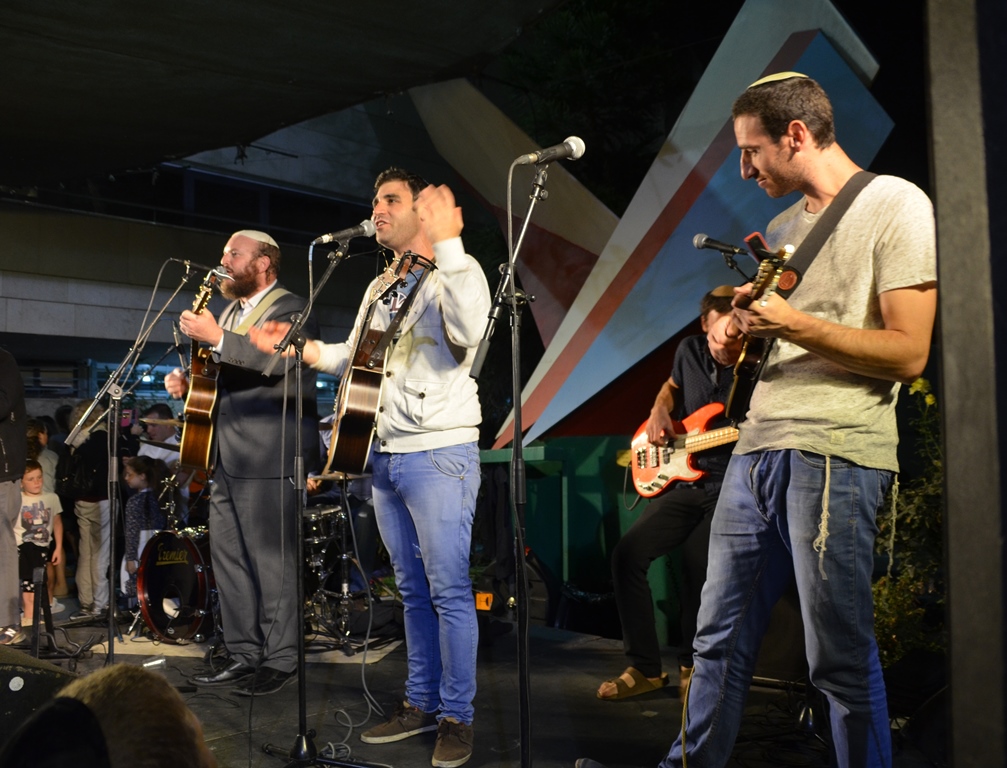 at the community center on Emek Refaim Street.

Thousands crowded to sing along,

to dance and watch the dancing.

Just a taste of what was happening in Jerusalem

this past holiday week.

Now back to “normal.”

One thought on “18 Favorites of Sukkot in Jerusalem”