was run on Friday morning, March 17.

The Jerusalem streets were closed and traffic was blocked 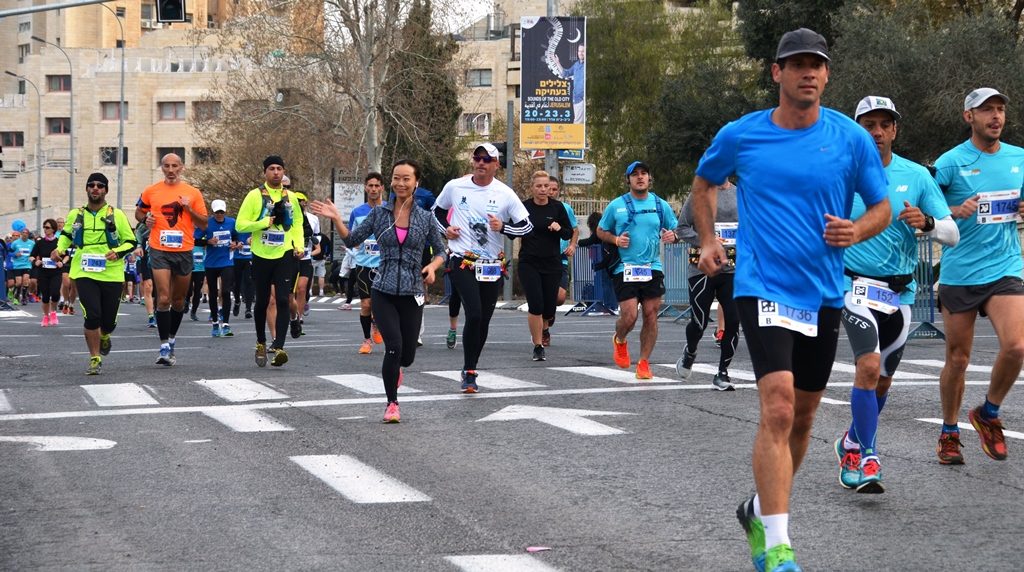 as 30,000 runners participated in the full marathon

and a number of other shorter races.

As the full marathon runners were going by 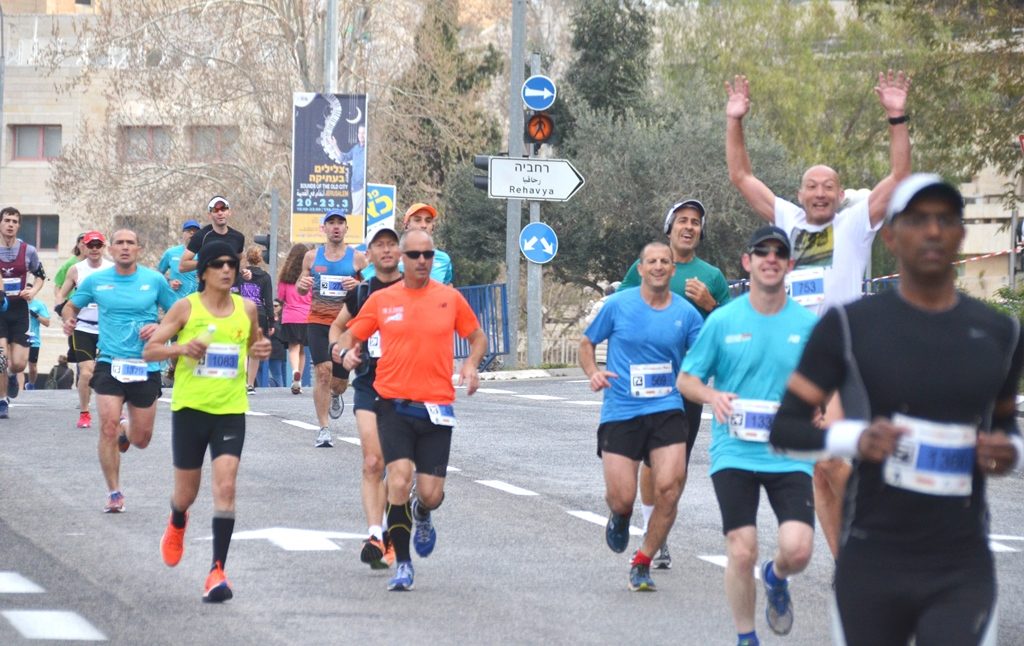 at least one man on the right wanted attention, 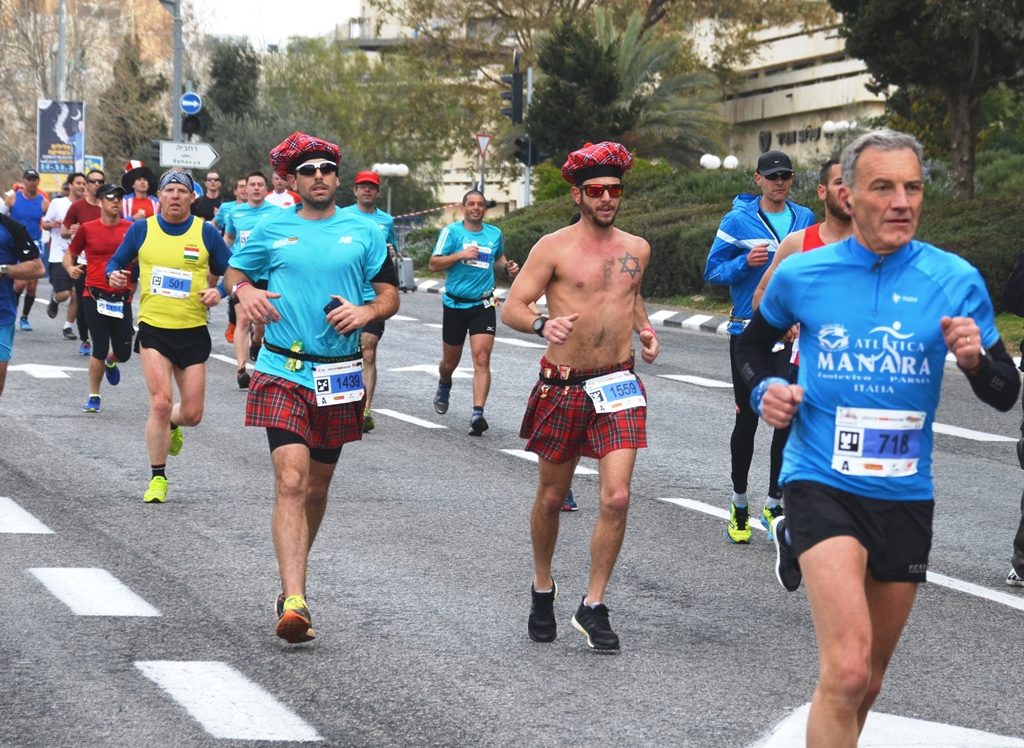 as did the two runners in tams and kilts.

Over 60 countries were represented, 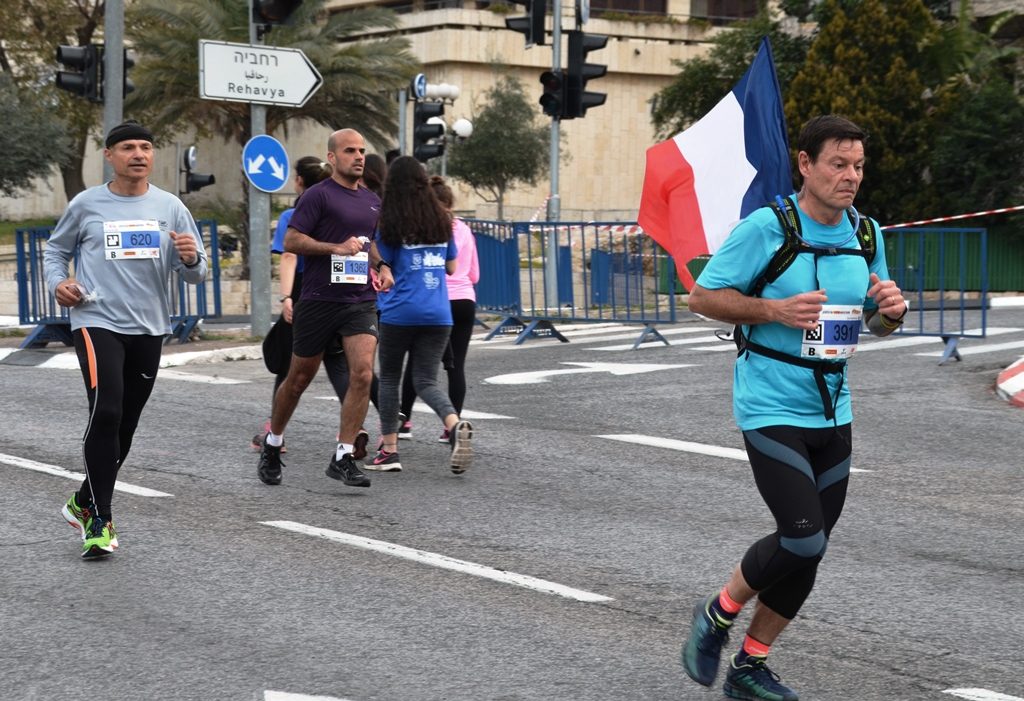 but I only saw one French flag. 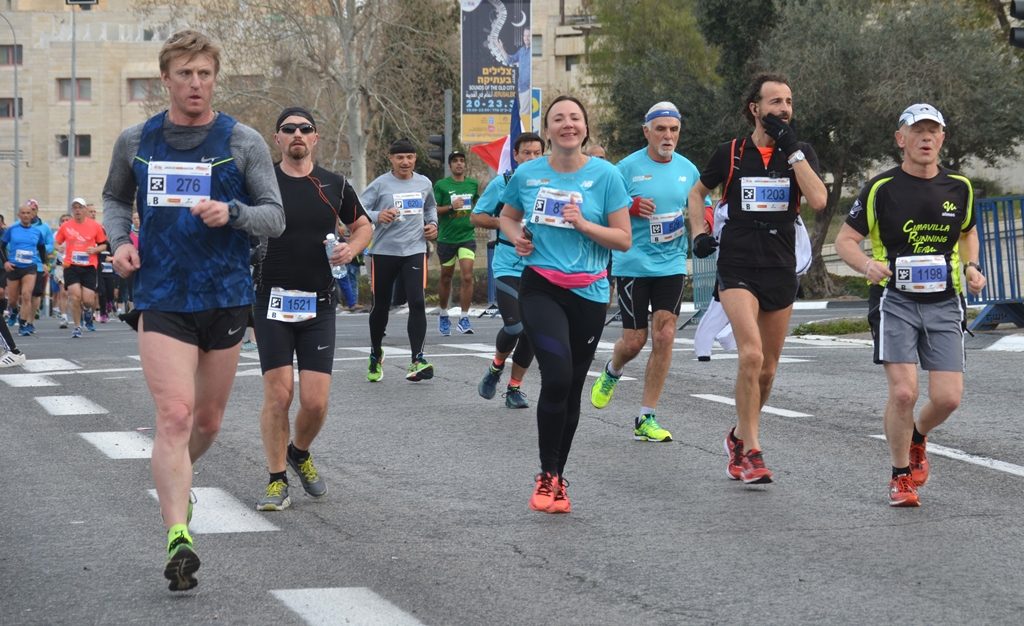 Women were in the crowd running the full marathon. 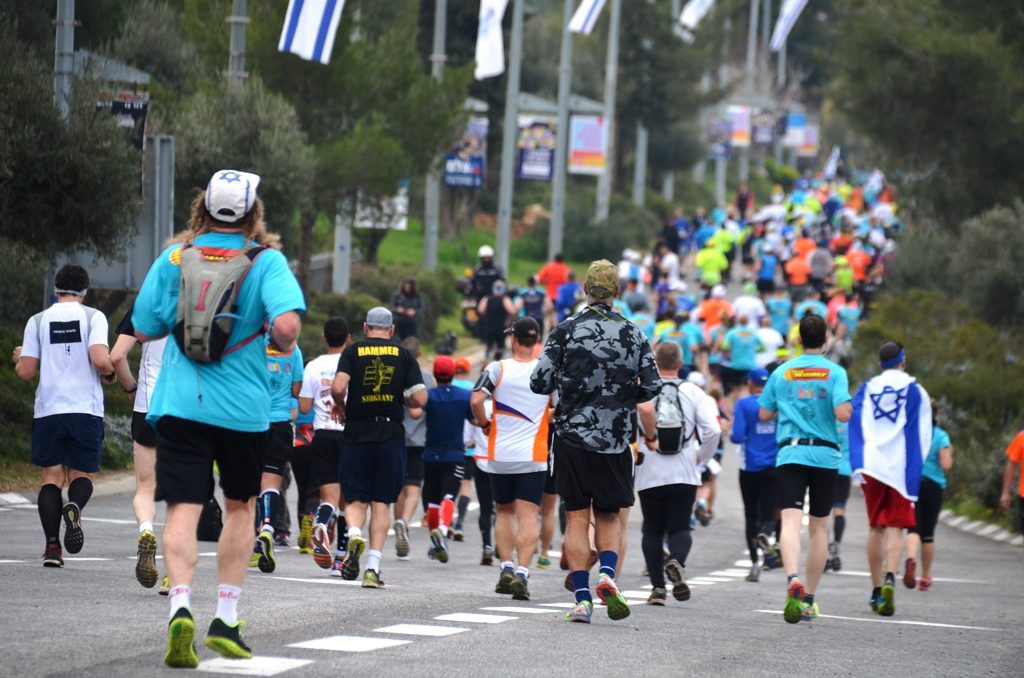 Tens of thousands ran through the streets,

as the route looped around and through the Old City. 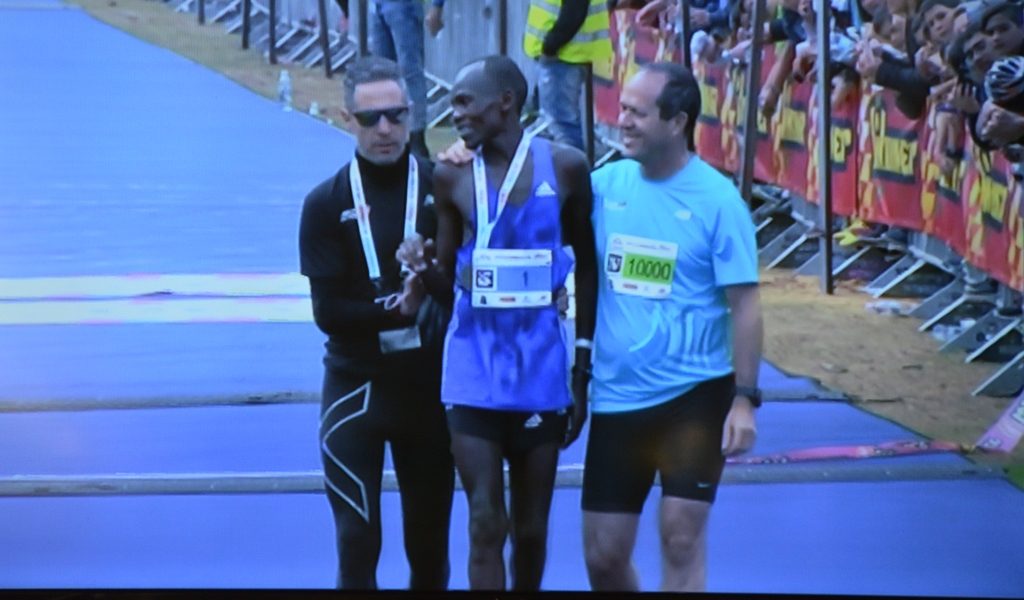 After kissing the ground,

Jerusalem Mayor Nir Barkat, who was dressed for a 10 K run.

I took 500 photos and it was hard to decide which ones to share. 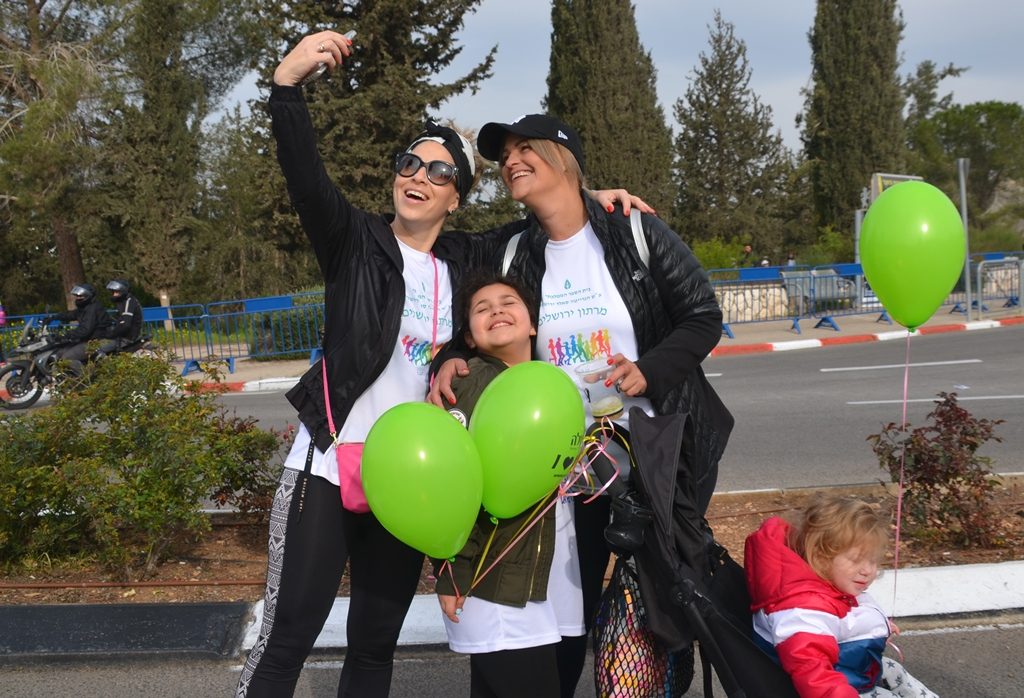 But thousands of selfies were taken at the starting line 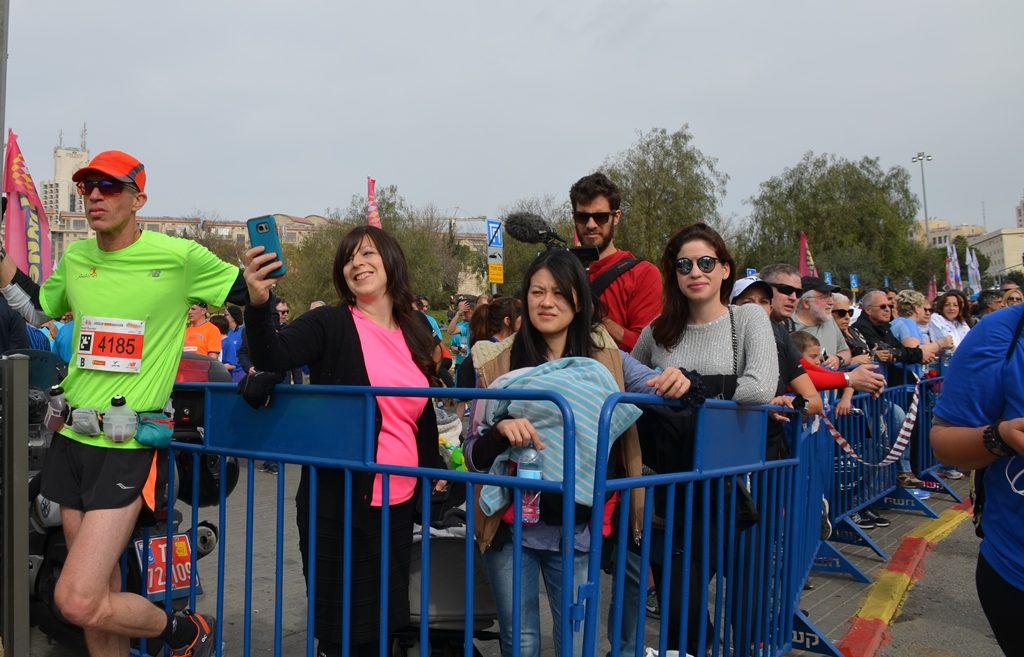 and at the finish line.

One of my favorite photos and stories:

I posted a photo of a family from South Africa

dressed in red on Facebook at night after the race, 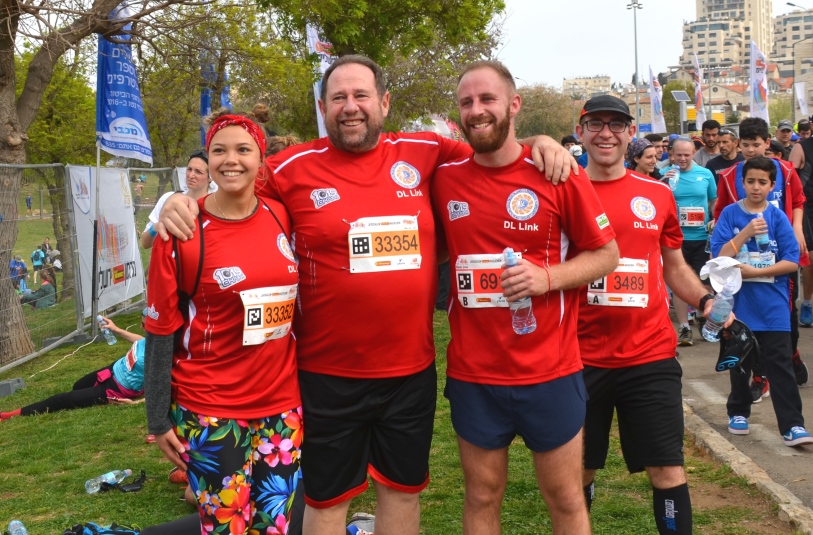 and by morning all the names had been tagged.

Water stations were located along the route, 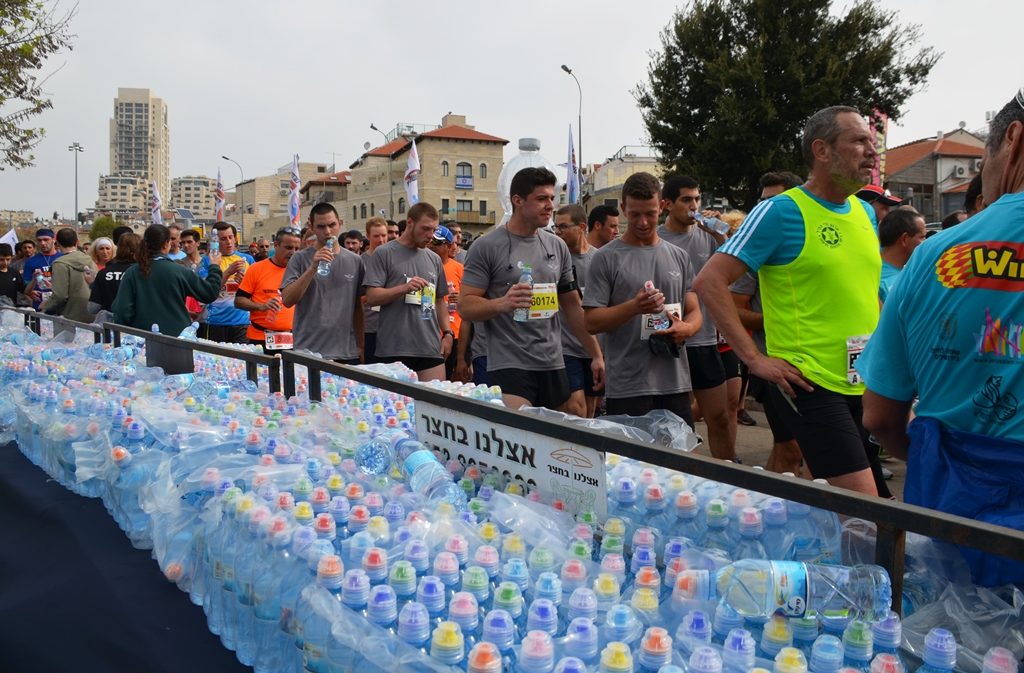 plus this one where runners re-entered 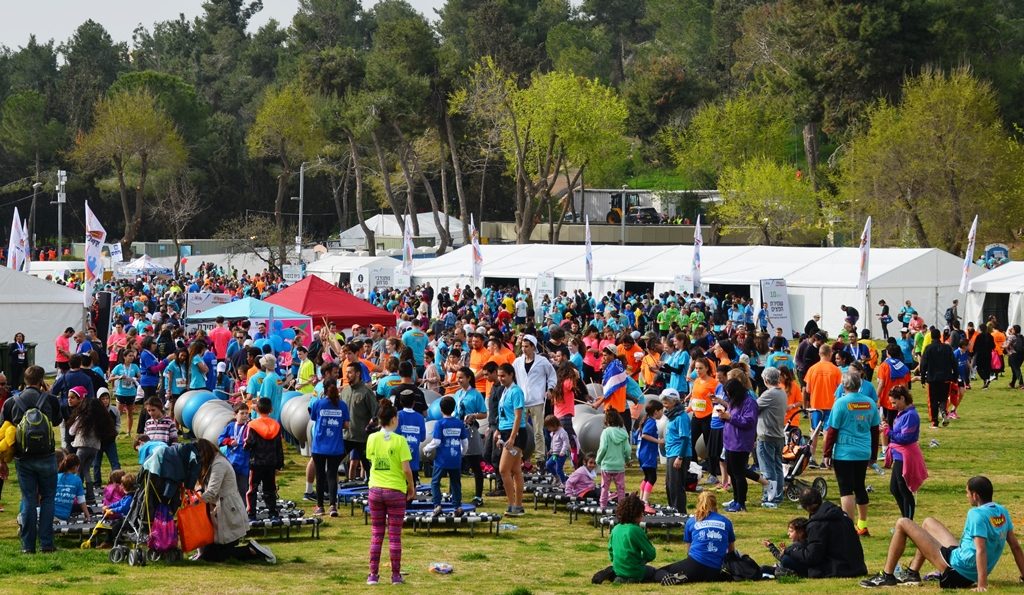 Tens of thousands were in the park 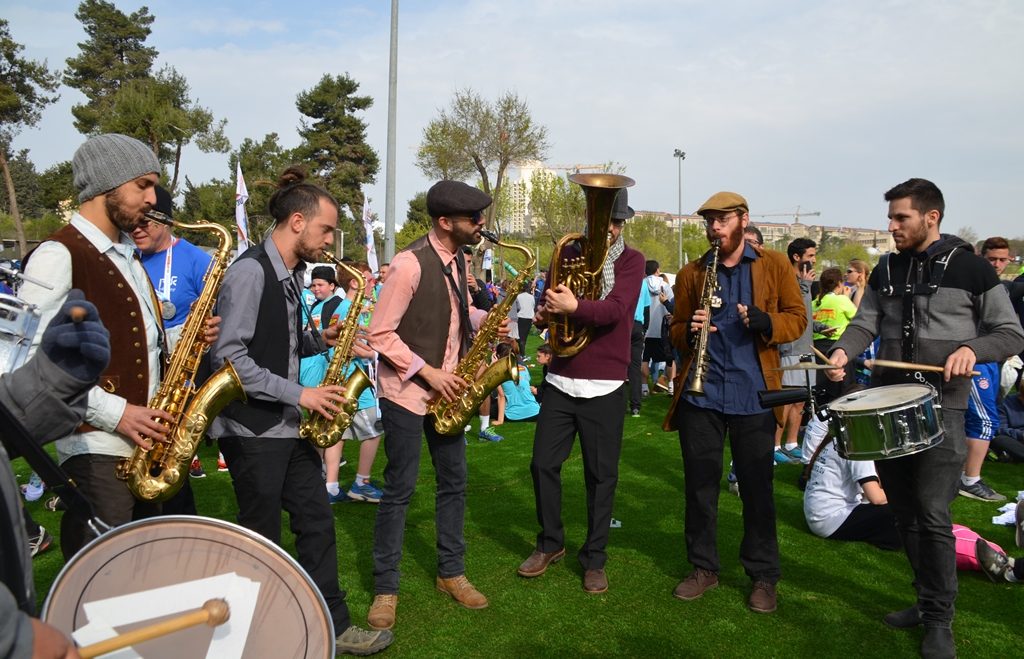 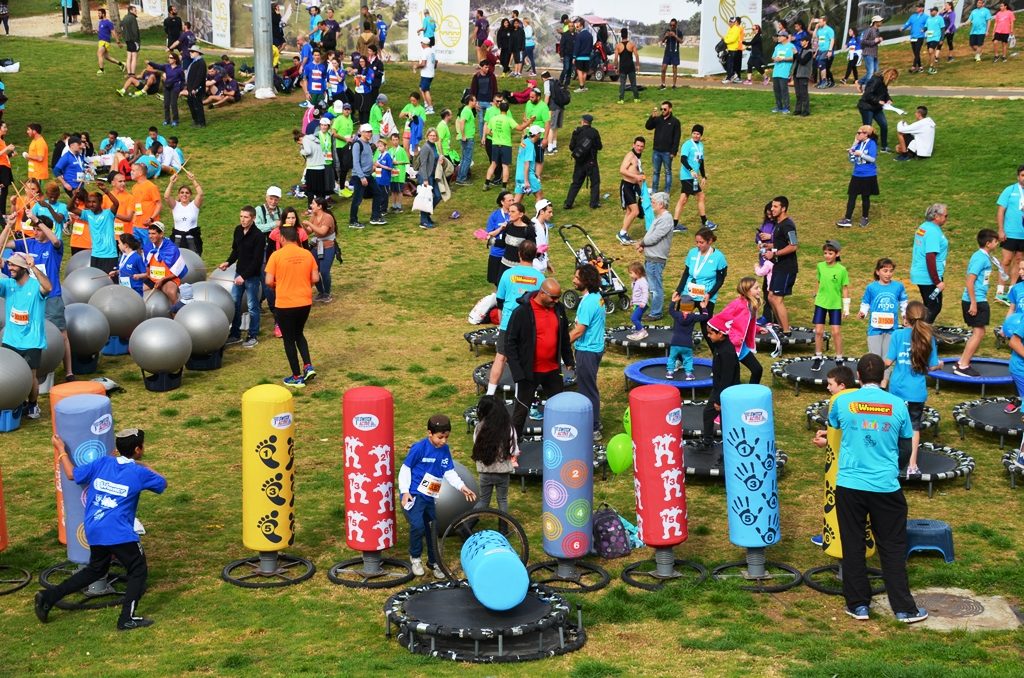 and the activities provided. 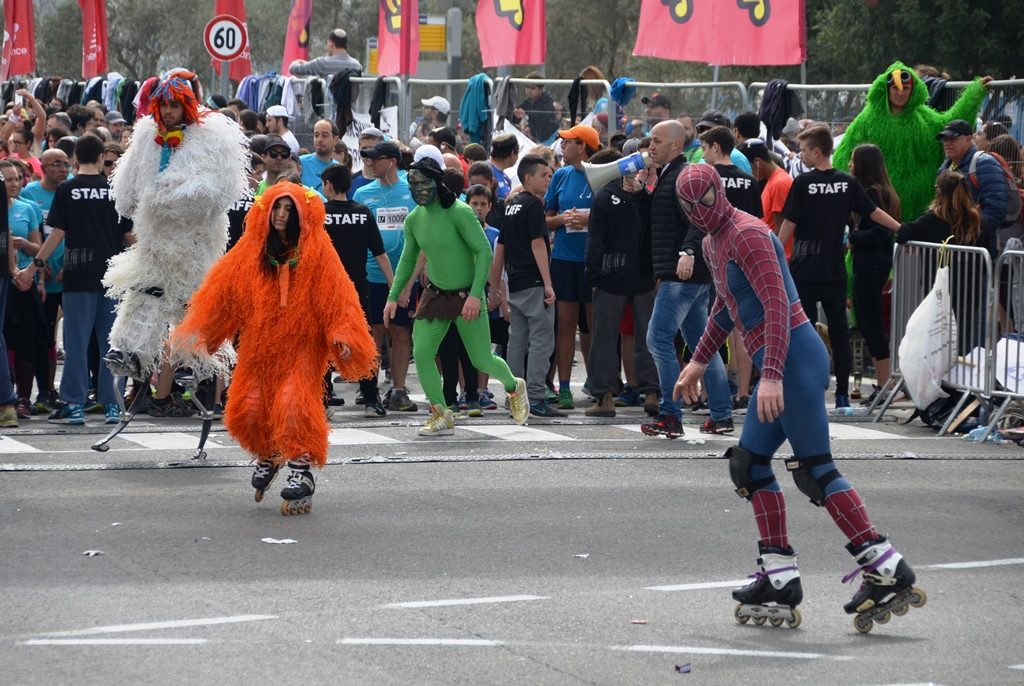 There was new entertainment at the starting line, 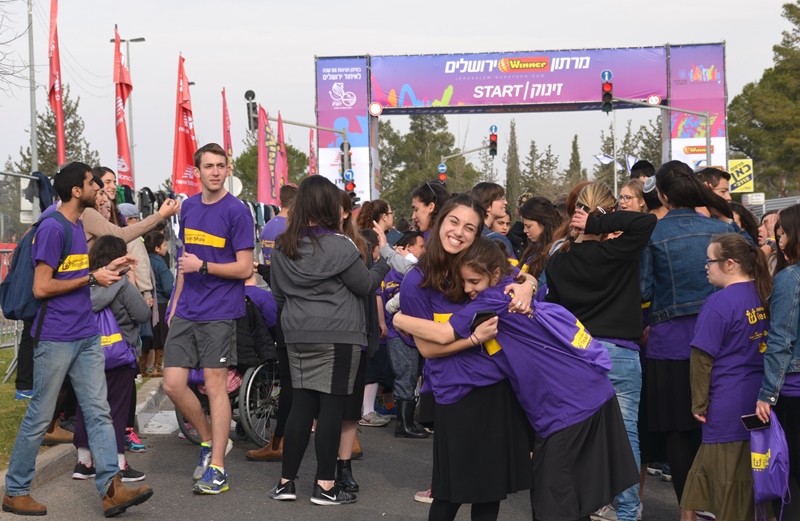 but many participants were so excited they hardly noticed. 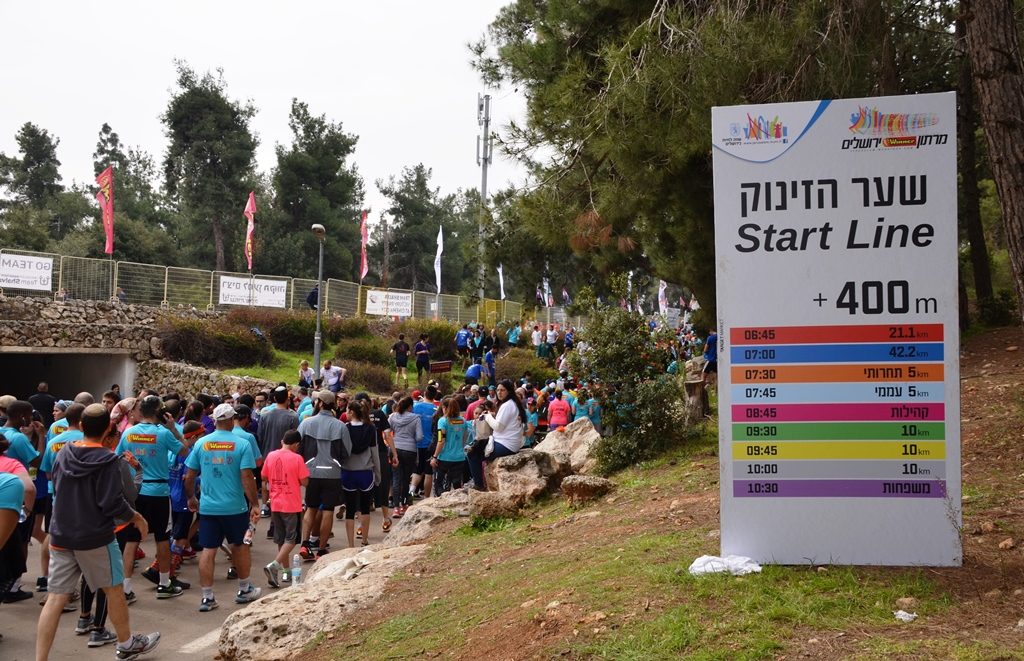 Just getting to the starting line took a long time,

because of security and  crowds

The 10 K race had 3 different starting times and groups 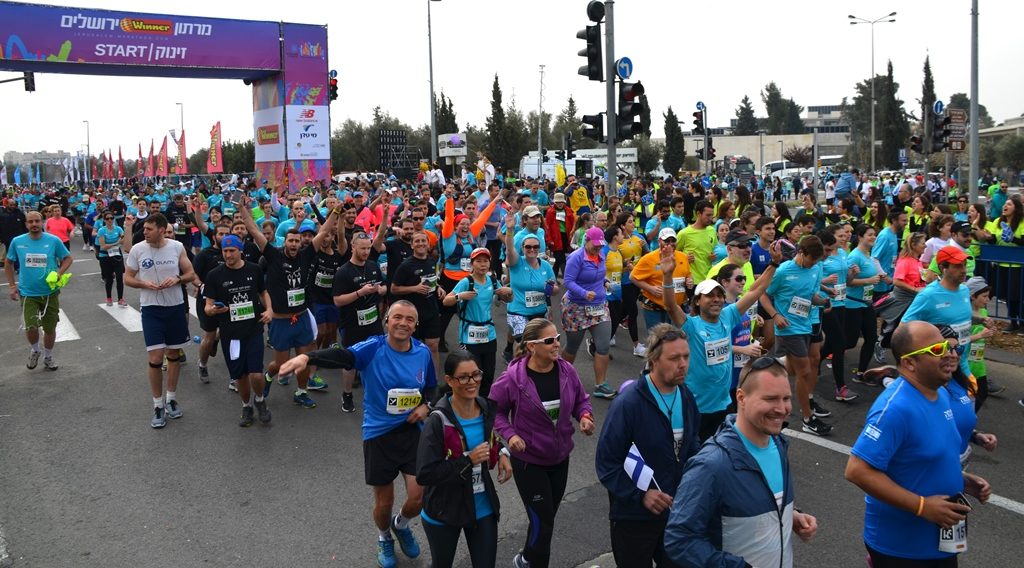 for the thousands who participated. 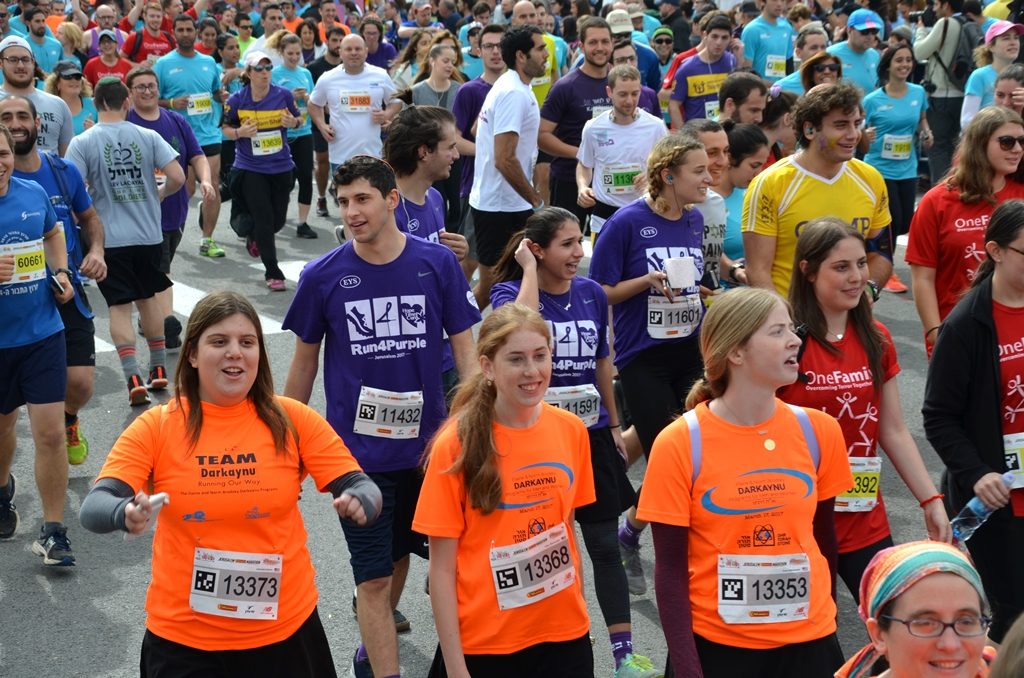 were worn by thousands of runners, 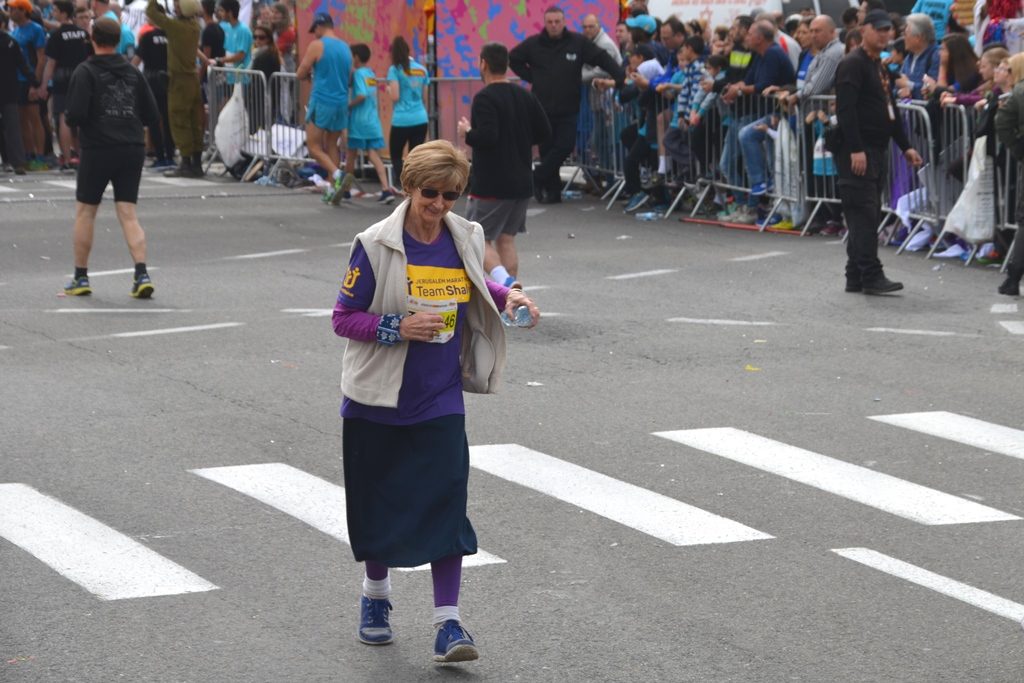 and this woman who walks for Shalva,

was back again this  year.

Remembe I commented how I never saw the mayor running? 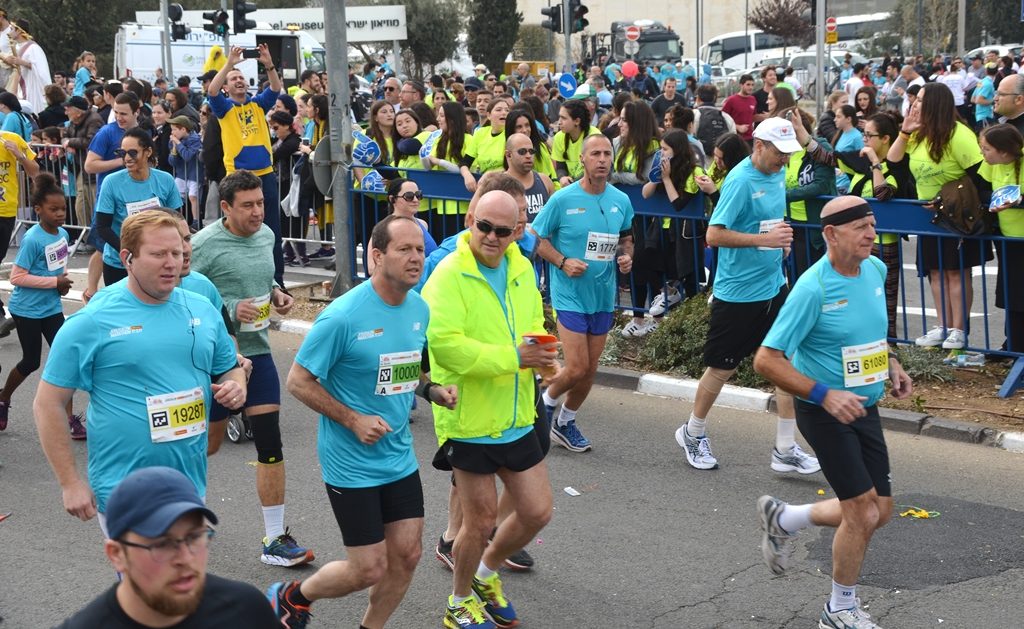 Well, this year I saw him at the start 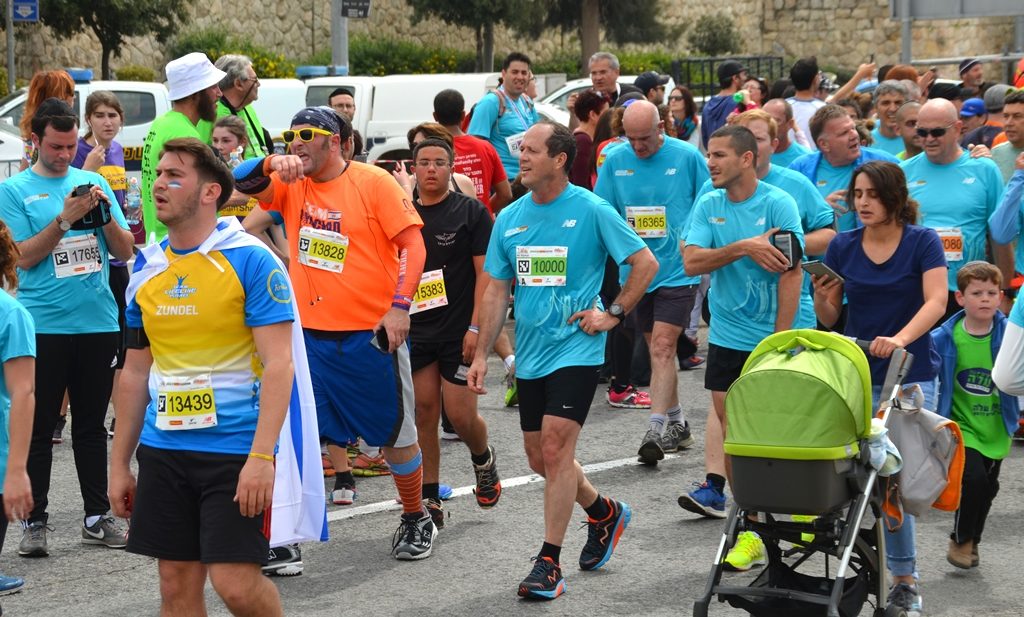 and again at the end of the race at the finish line. 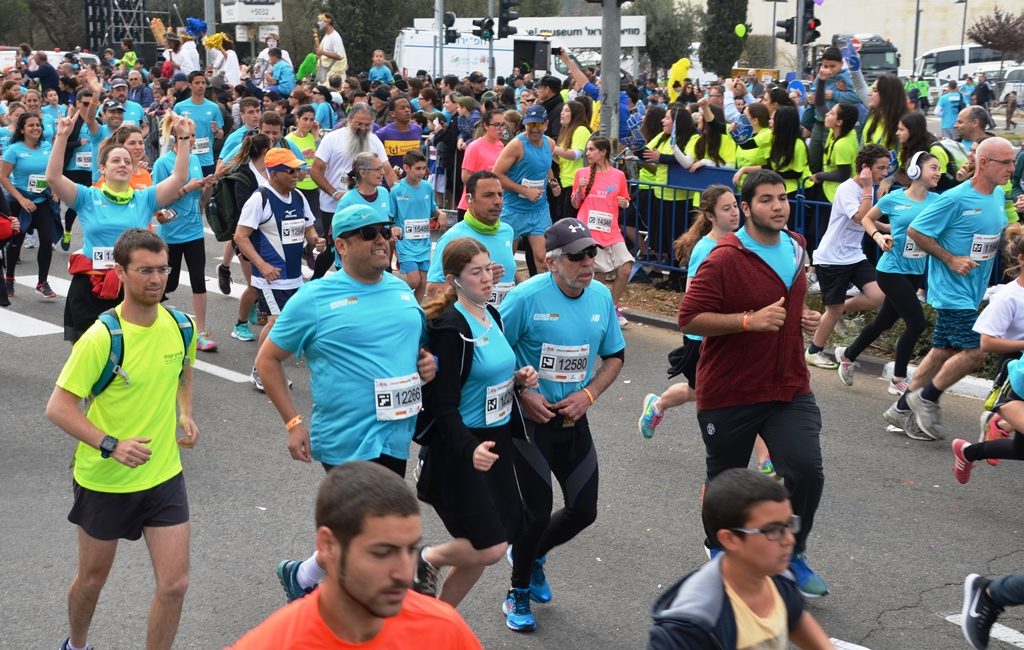 at both the starting and finish lines.

The numbers attending the Jerusalem Marathon

have grown so large it is hard to find family or friends.

One of the reasons the numbers have grown 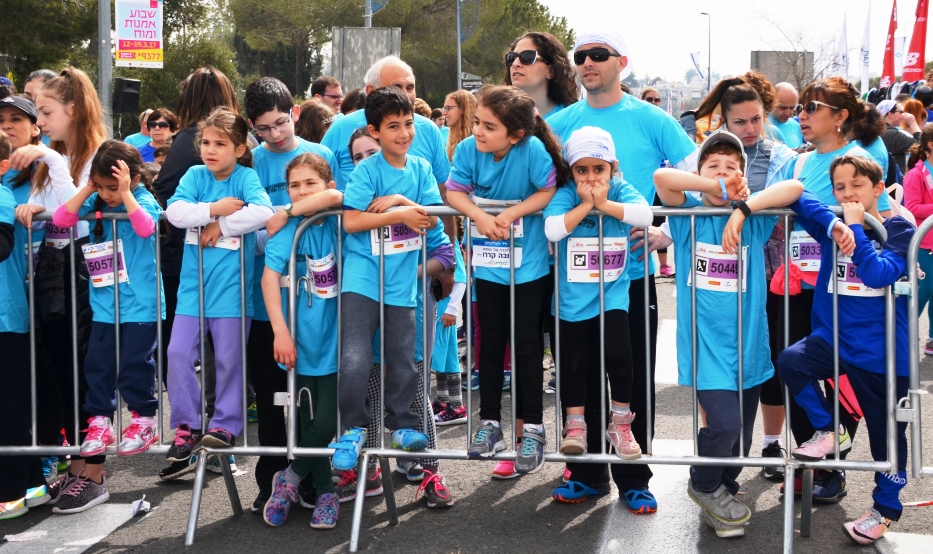 is the participation in a special Family Race.

I did not stay for the starting gun,

as I was racing back to the 10 K finish line.

But the family members I was looking for?

I did not see any of them!

While walking home, I passed those taking 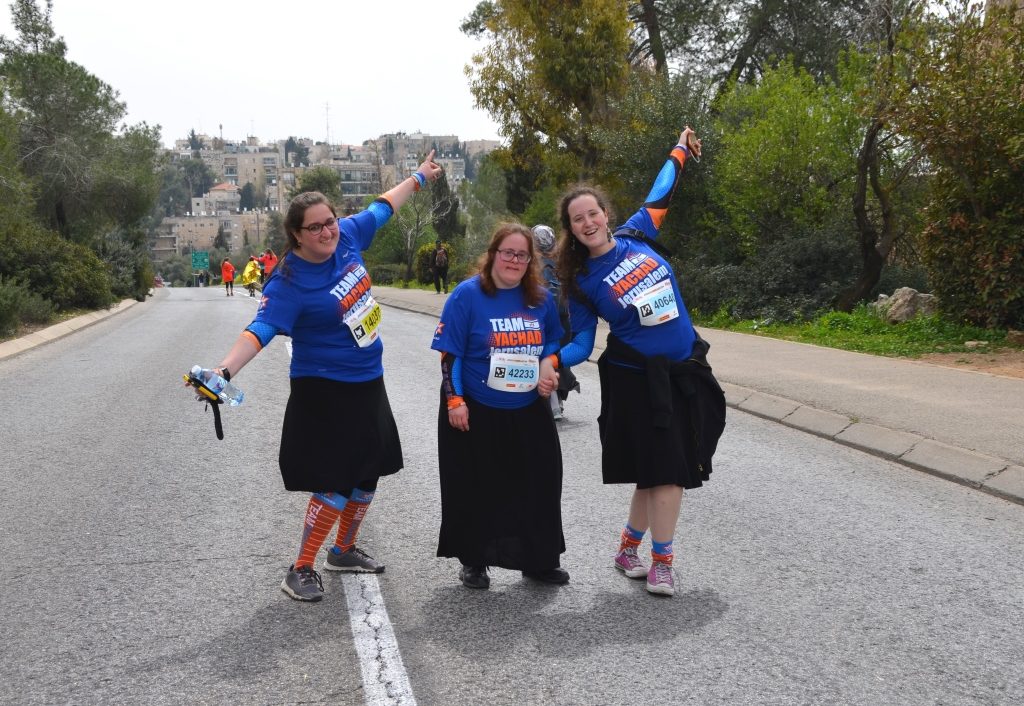 Some streets opened early to traffic this year. 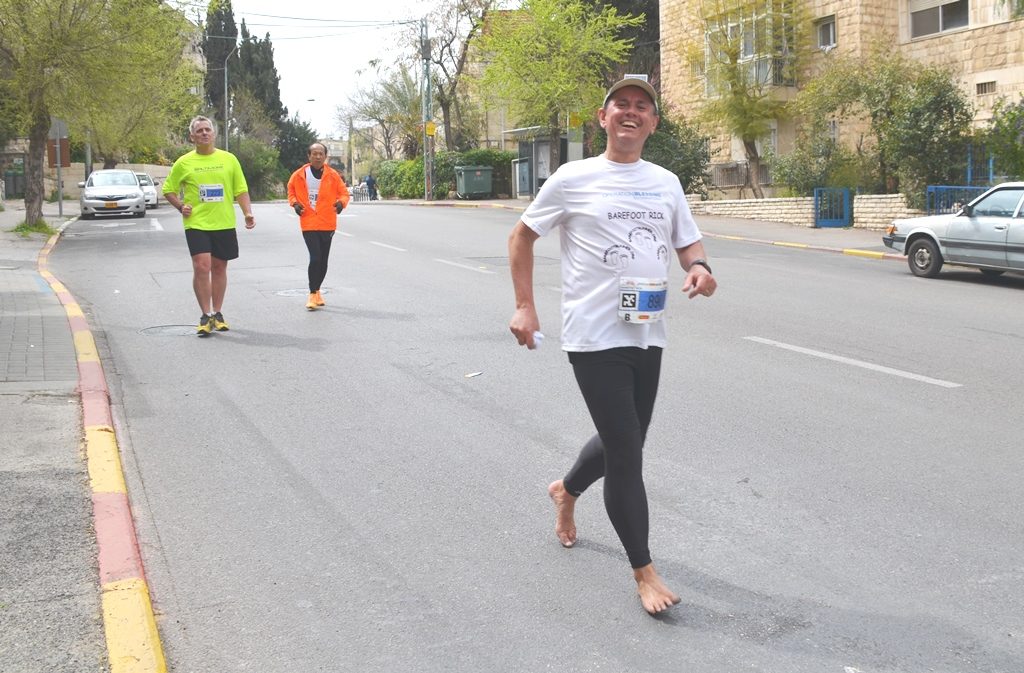 And there was Barefoot Rick,

still smiling as he finished up another marathon.

he has run without shoes to raise money for charity.

Tens of thousands ran through the Jerusalem streets,

millions of dollars were raised for charity.

There are people who still hate it,

but look for an even bigger and better one next year.

The date is set for the next Jerusalem Marathon:

By then I had better get an app for my phone

so I can know how many kilometers I walked.

It could be way more than a full marathon.

2 thoughts on “Favorites from Jerusalem Marathon”