Every day, we are faced with challenges.

In Jerusalem, Israel, the weather has just changed and challenges us. Challenges range from something so simple as what to wear to the major challenge of how to provide housing to those who need it.

With limitations, both east and west and in green spots, up & up seems the only way to go.

Southern Israelis again were challenged, as hundreds of missiles were fired at civilians from terrorists based in Gaza.

I did not go south as I did one year ago, the images were too much the same.

It’s challenging to try to remember which ‘Operation’ my photographs are from since there have been so many similar trips south to visit families in bomb shelters. 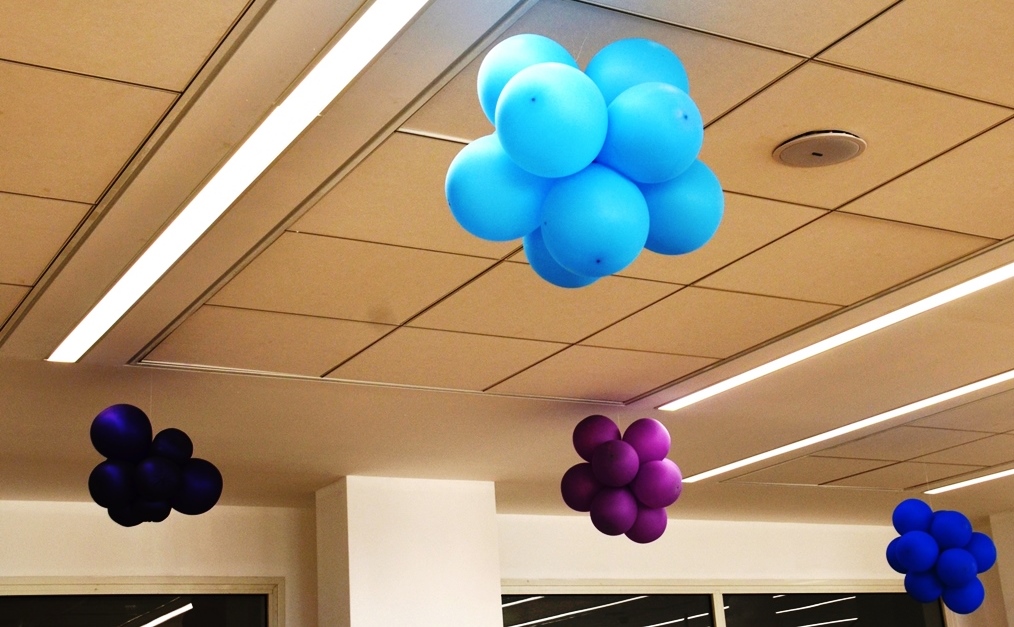 On one recent trip to see the destruction caused by the Gazan fire balloons, these balloons were hanging in a new southern school.  Educators who were challenged to help children not be afraid of red alerts and sirens had another fear to add to the list – balloons.

On a personal level, we all have challenges.

Parents turn to ALYN Hospital, a pediatric orthopedic and rehabilitation center in Jerusalem, to give their children the best treatments. 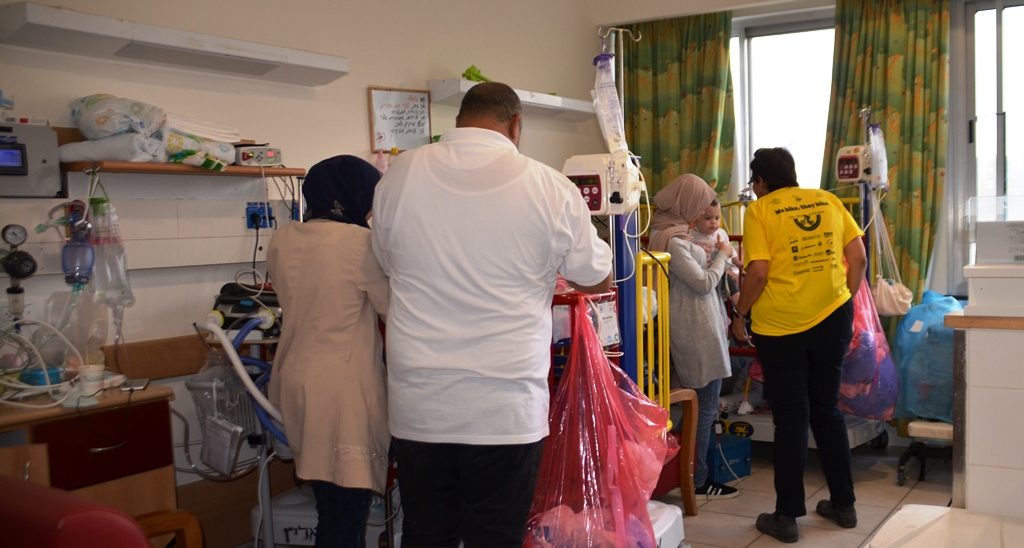 ALYN treats a wide range of patients, from babies with illnesses needing constant special attention, to older persons challenged and needing special therapies due to accidents or illnesses. 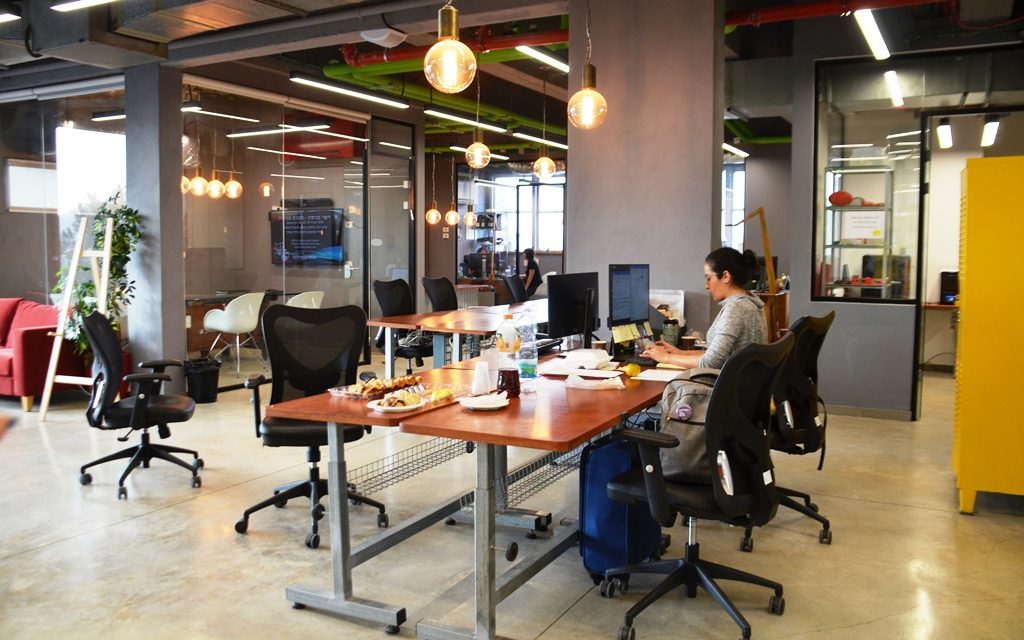 In the new Innovation Space, unique devices are crafted, such as Yusuf’s feeding device enabling him to eat on his own in spite of a difficulty in movement. 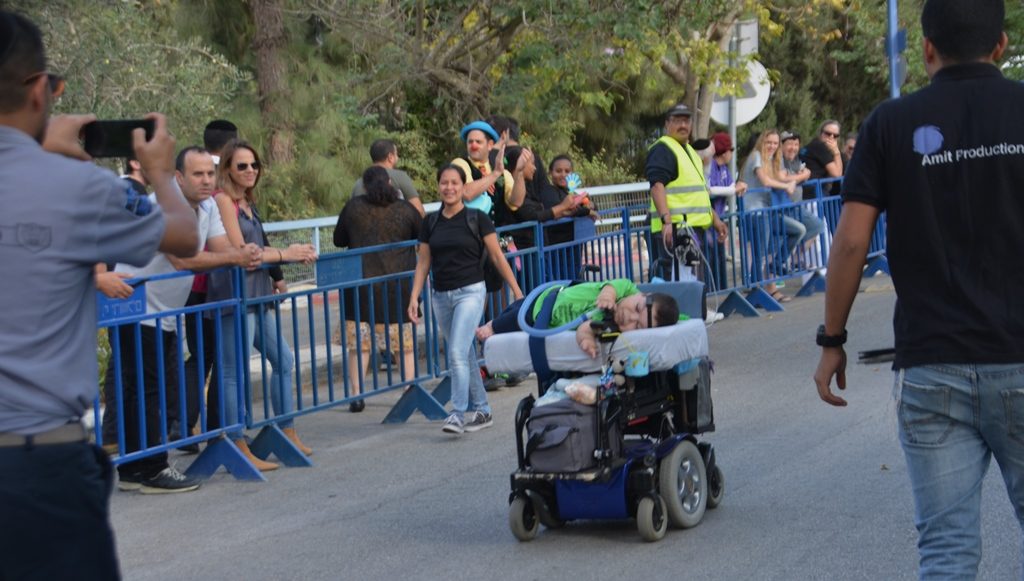 Your daily challenges might look different when put in perspective of ALYN patients and their challenges. 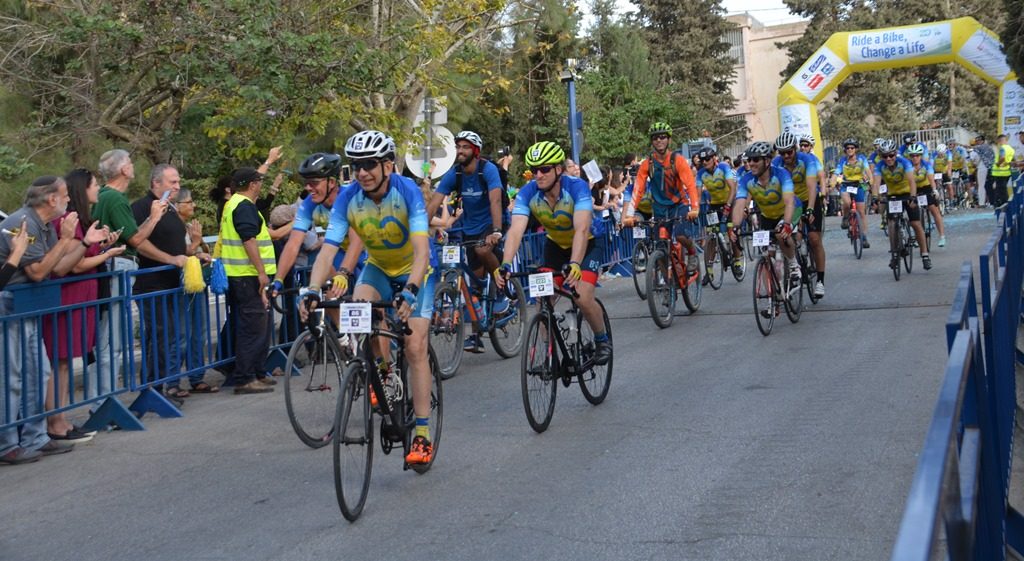 For the 20th year, ALYN held the ‘Wheels of Love’ charity bike ride. 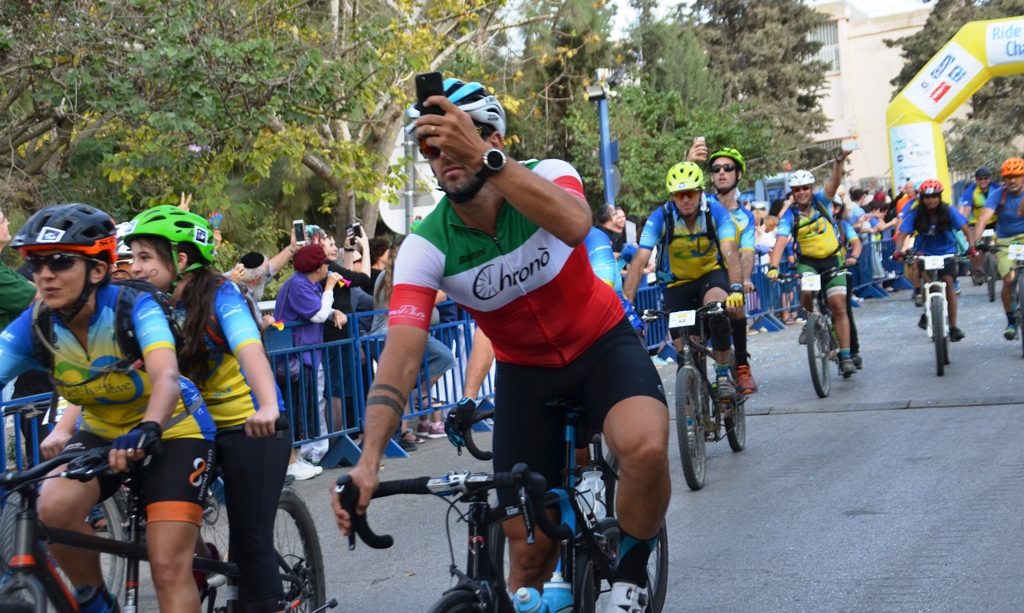 International participants from 12 countries joined with local riders and patients past and present to raise money for life-enhancing treatments and therapies, not covered by the basic Israeli healthcare.

Please notice the tandem bikes among the 500 cyclists, as they ended their 5-day ride from northern Israel. 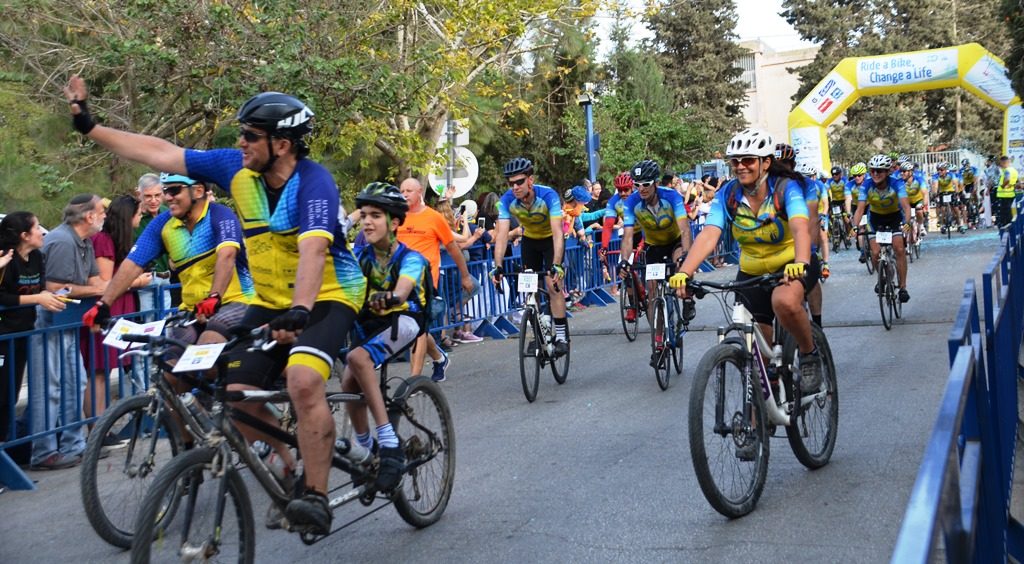 Riders are challenged by the last climb up the Judean hills to Jerusalem but excited to pass the finish line. 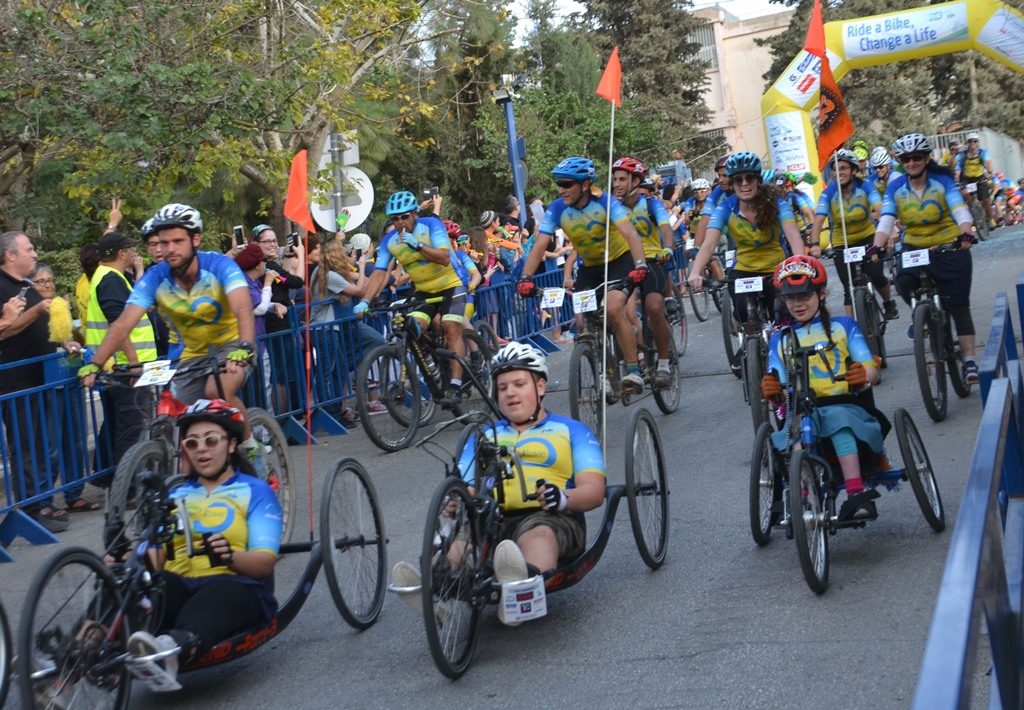 This was not your usual challenging bike race. Seventeen members of the Swift and Bold team were patients either riding tandem or hand-powered bikes. 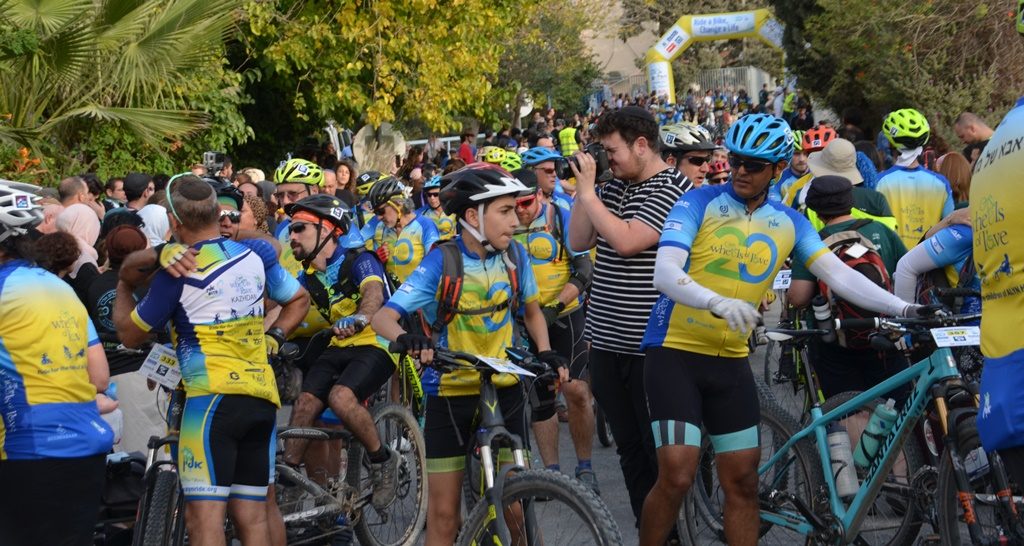 Supporters and family crowded around to greet the arriving riders.

Medals were presented to riders by ALYN patients. 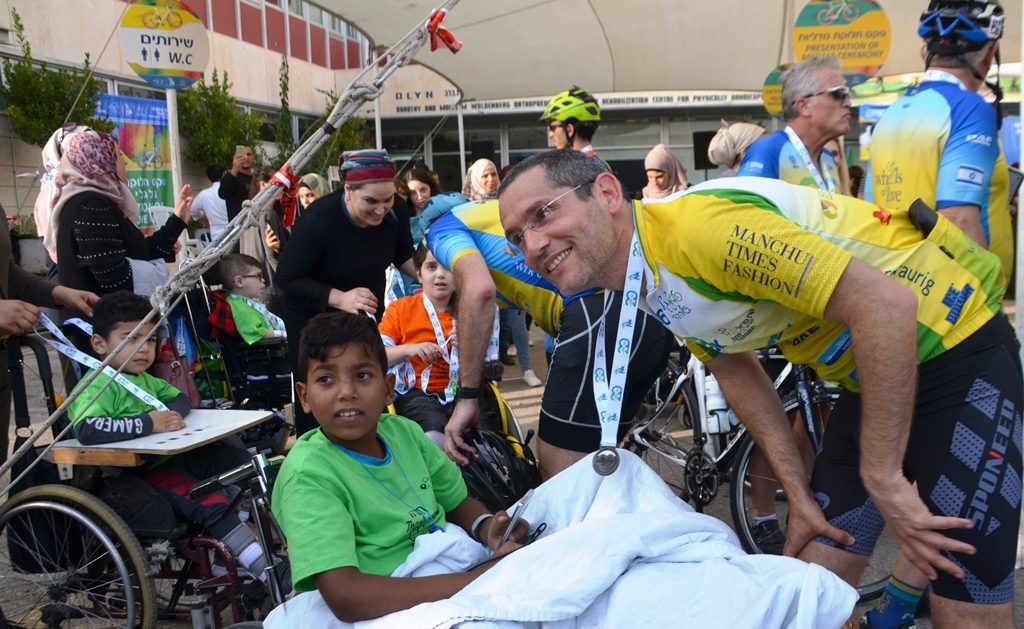 Dozens of patients and parents were ready with medals to present to cyclists. 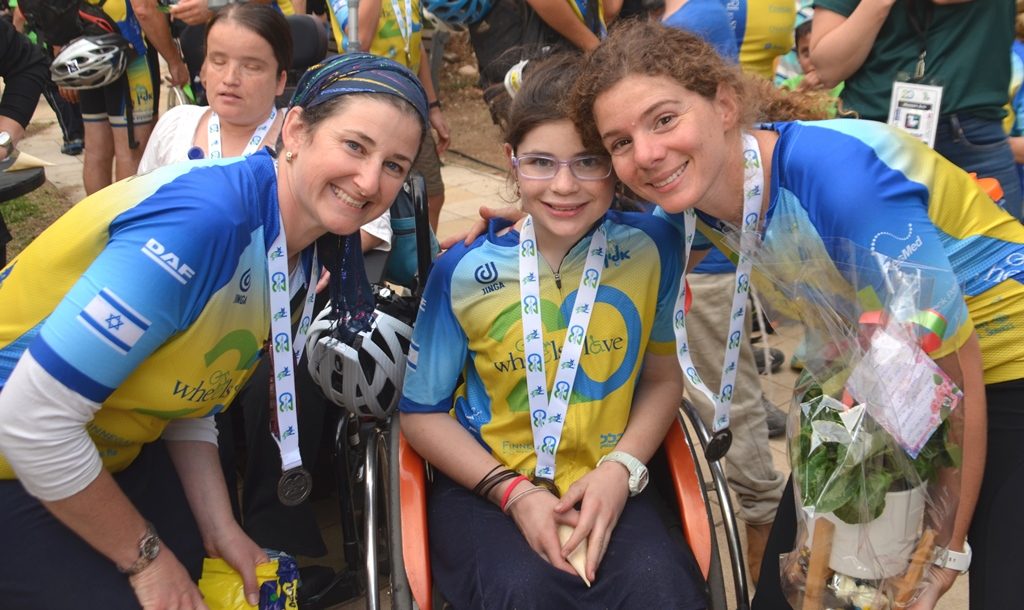 Smiles after overcoming challenges to reach a goal. 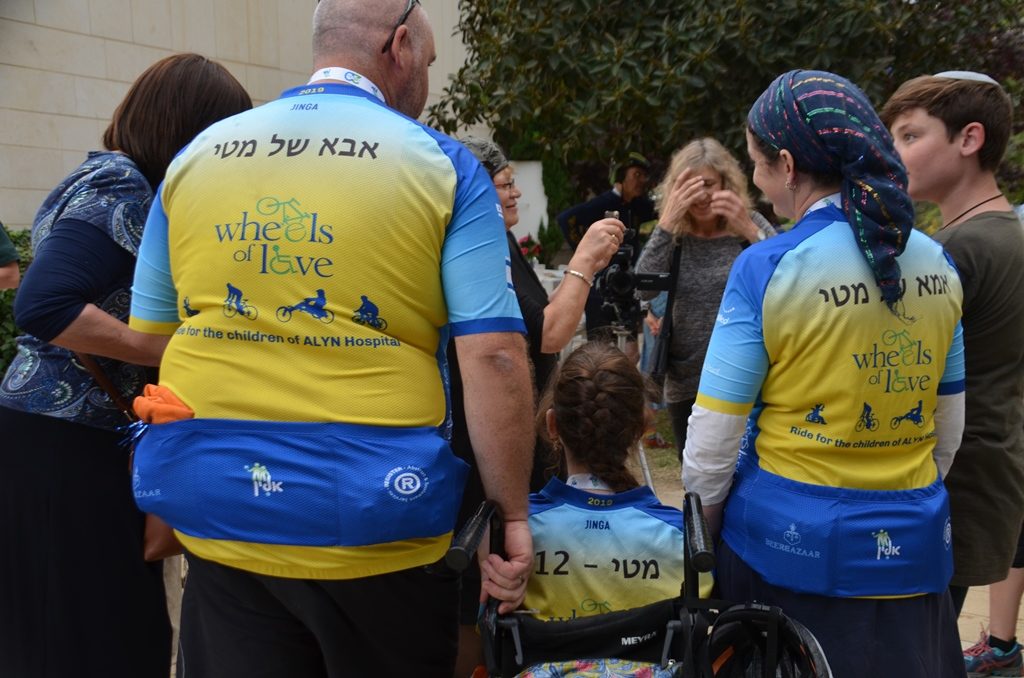 Father, mother, and daughter teamed up to ride in 2019 Wheels of Love Charity Bike Ride that raised over $2.5 million. While there were first-time riders, many had participated over a dozen times over the years.  Of the original nine cyclists who rode twenty years ago, six participated in this ride.

There could be a long list of challenges, from political to financial, in Israel or around the world. However, I will end with one faced weekly for Real Jerusalem Streets.

The RJS photos of Israeli Apartheid?

Two of the most popular, shared and viral posts over the years. 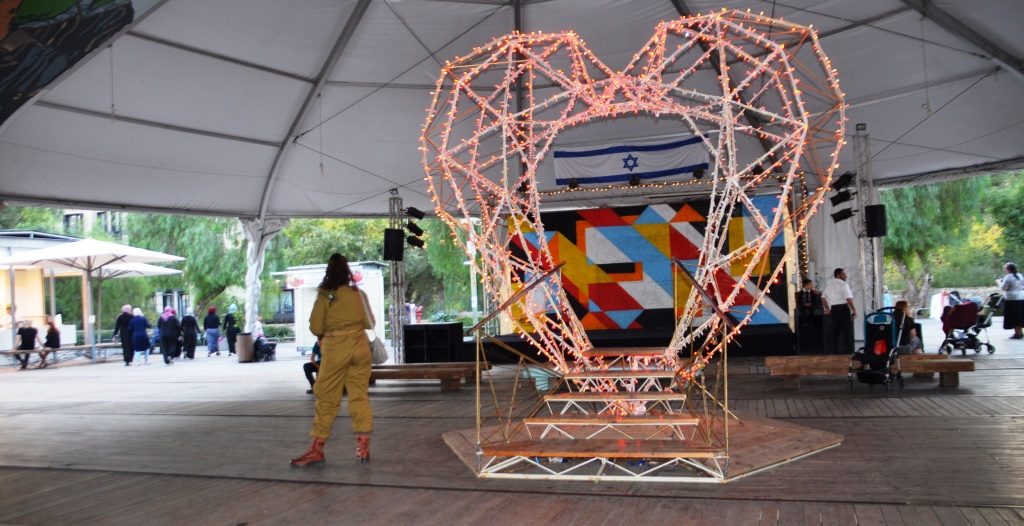 A lone female Israel soldier was standing in First Station. 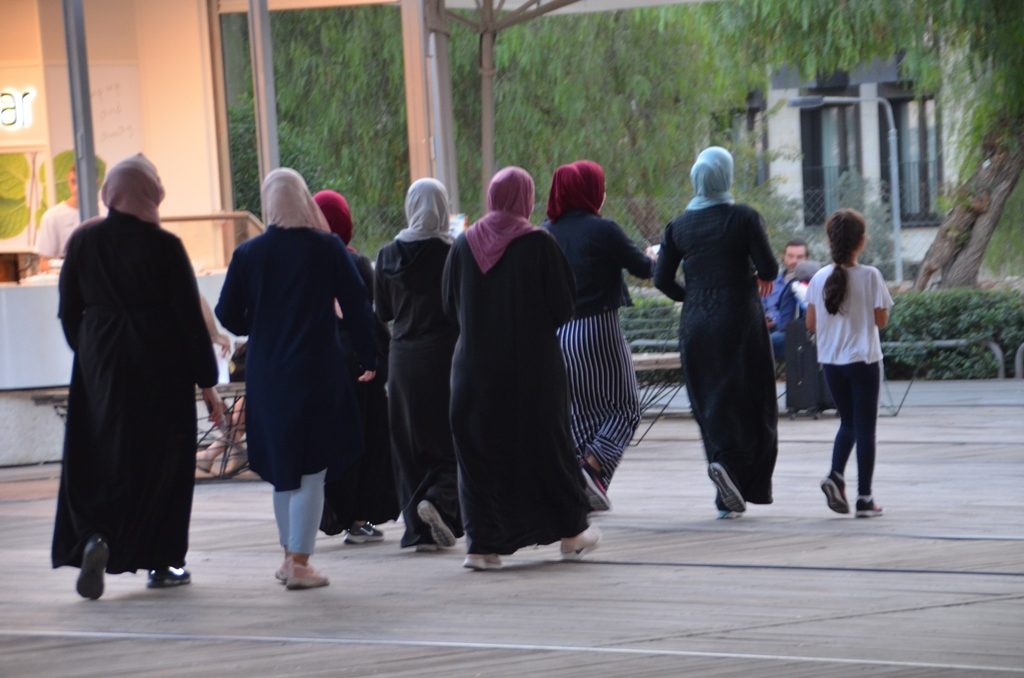 This group of Muslim women walked by. You can see them in the far top left of the previous photo. 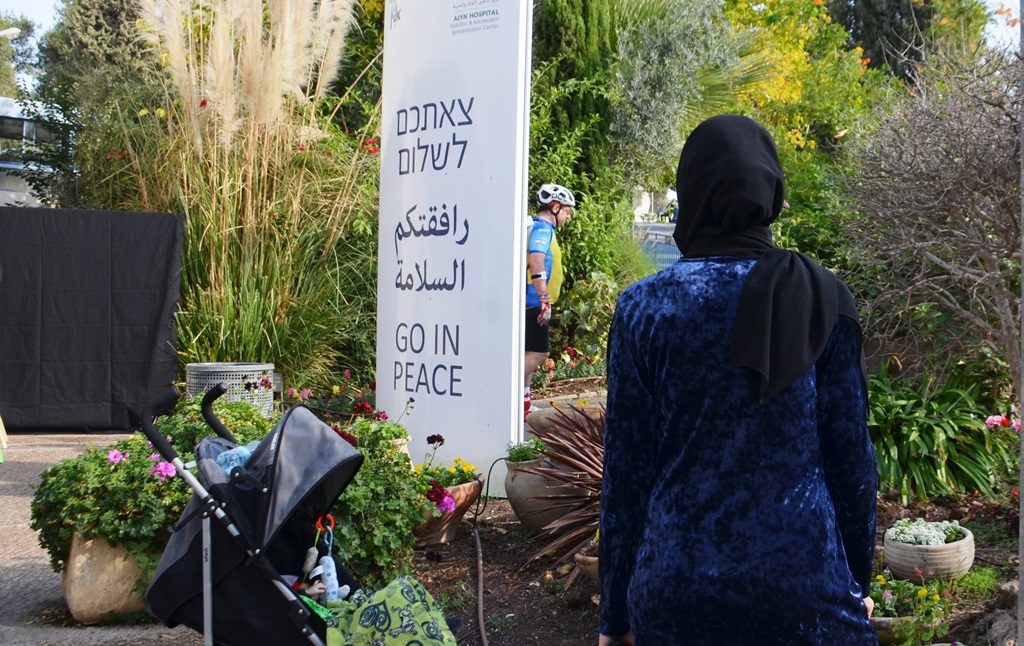 The sign at ALYN says “GO IN PEACE” in Hebrew, Arabic, and English.

Patients and staff, as in Israeli hospitals, universities, and public spaces are available for all.

The challenge is how to share the many positive things happening on the Jerusalem streets.

5 thoughts on “Overcoming Challenges in Jerusalem”