All around Israel glasses are being “raised”

My favorite was at Beit Hanasi,

where 90 foreign countries were represented

by their ambassadors or head of mission in Israel.

Ambassadors from Jordan and Egypt were present, 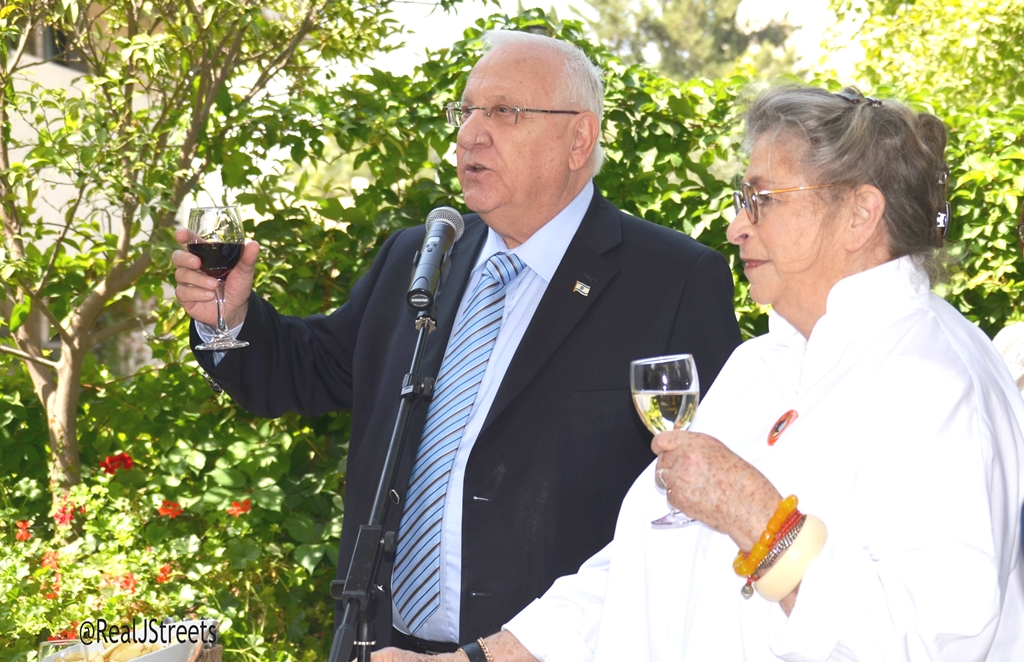 as President Reuven and Nechama Rivlin

made l’chaim outside in garden reception, 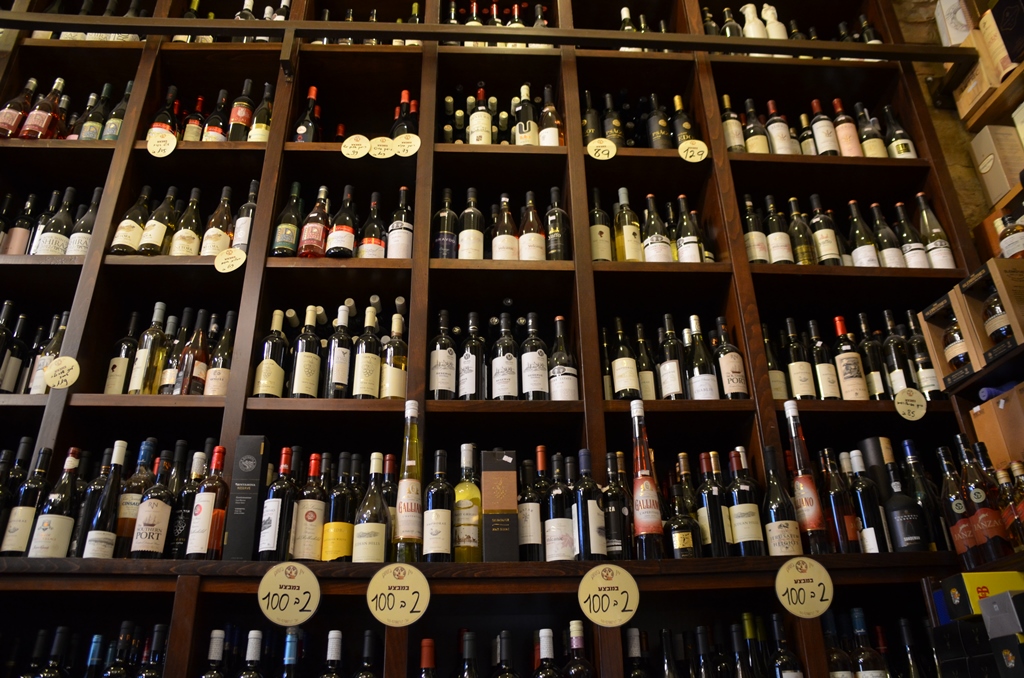 Since 1870, the Teperberg family has been making kosher wine,

and we tasted some new favorites on a tour Sunday night.

Before Rosh Hashannah wine for gifts 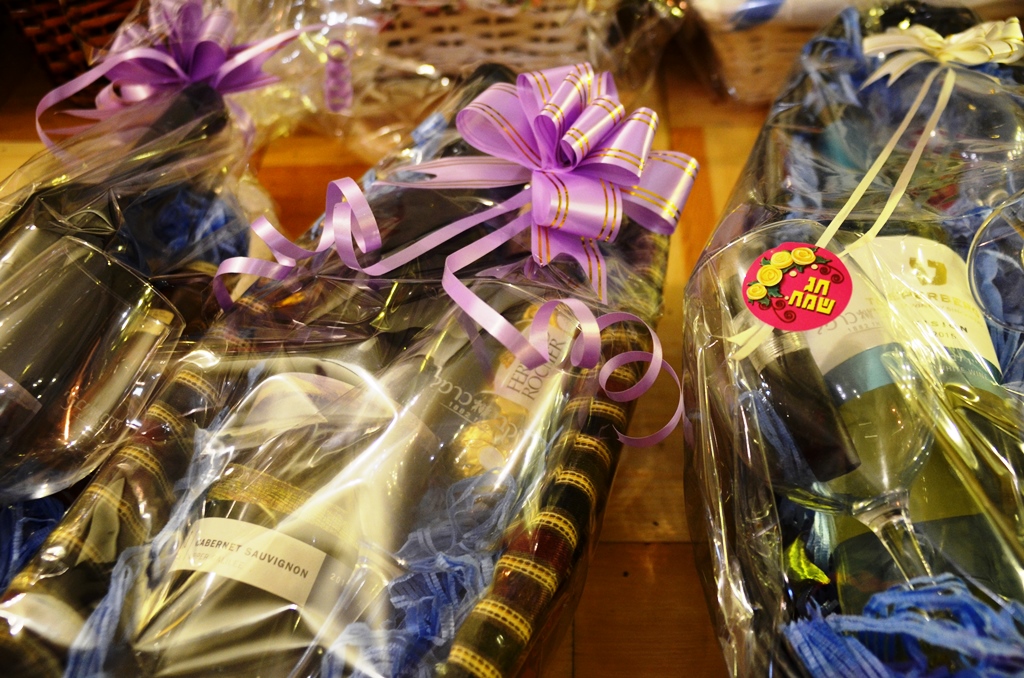 and gift baskets with wine seem to be everywhere.

Chalahs will be piled high by the end of week, 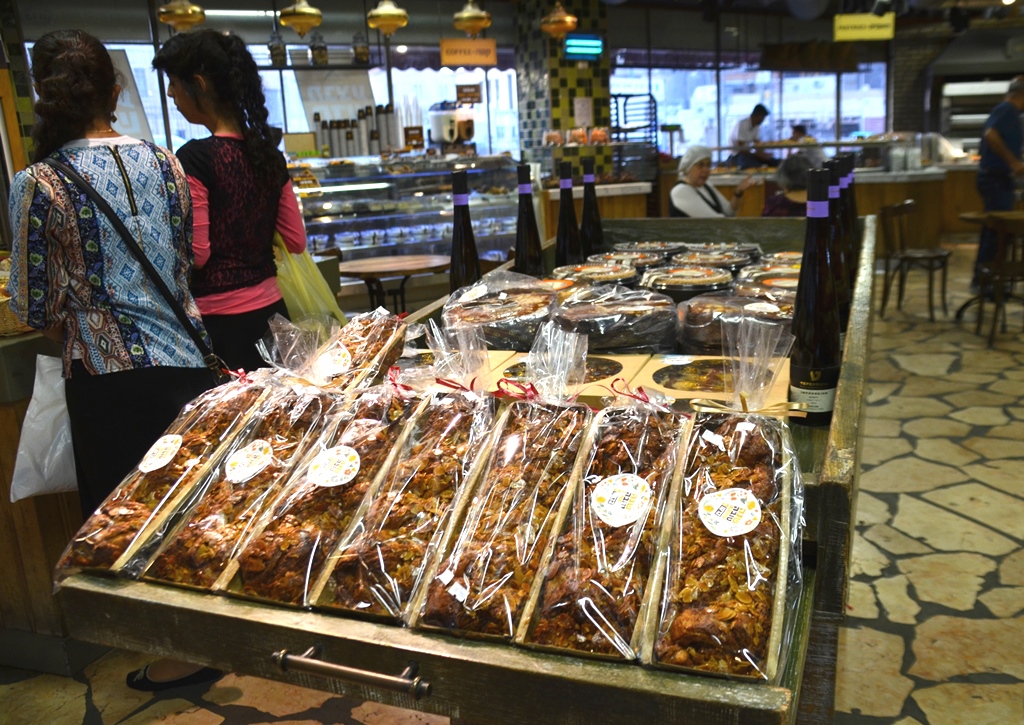 but holiday cakes were ready and on display early.

Did you know Berman Bakery been baking since 1875?

not as old as the winery or bakery, 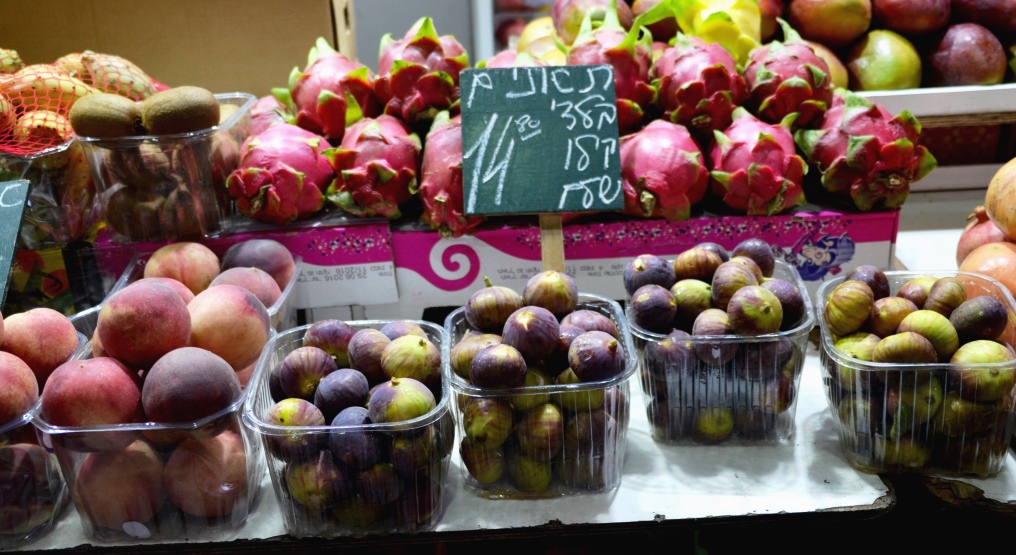 has piles of varieties of new fruits out for the holiday.

The shuk has changed greatly. 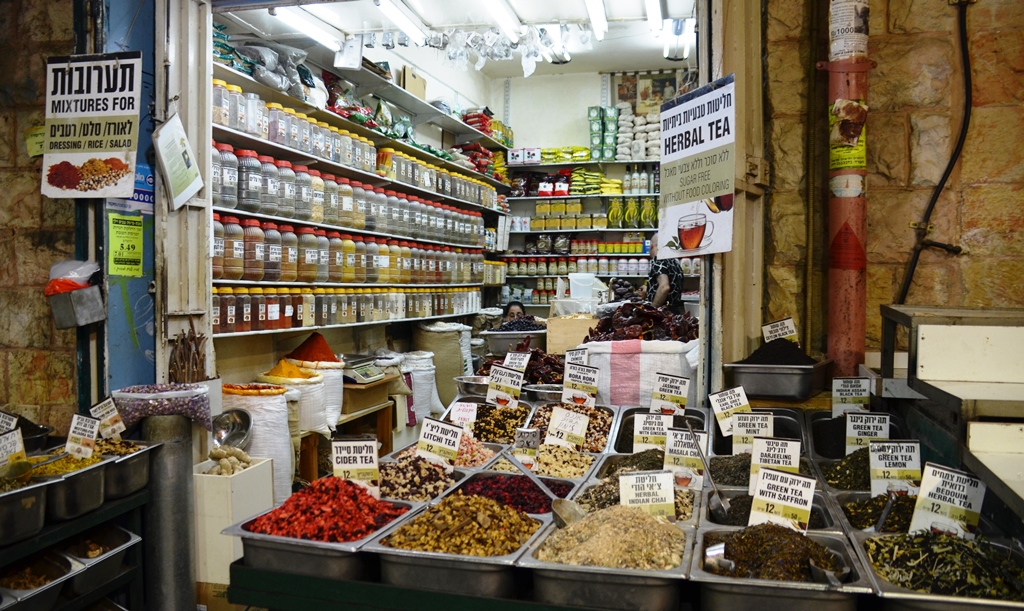 The familiar looking stalls with tea, 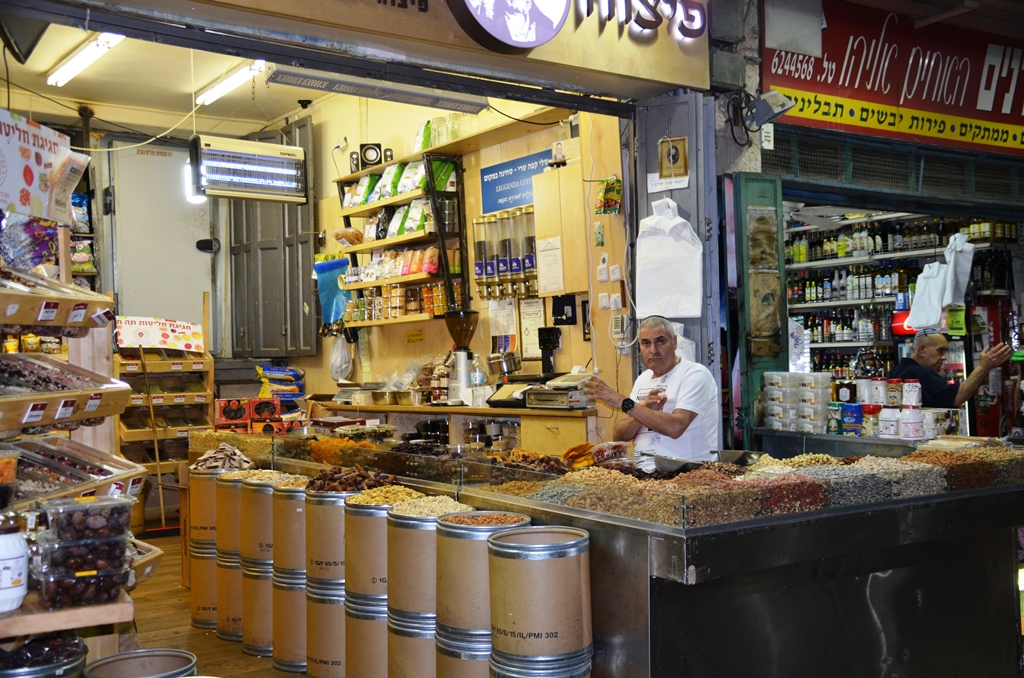 shops with nuts, oil and spices by day, 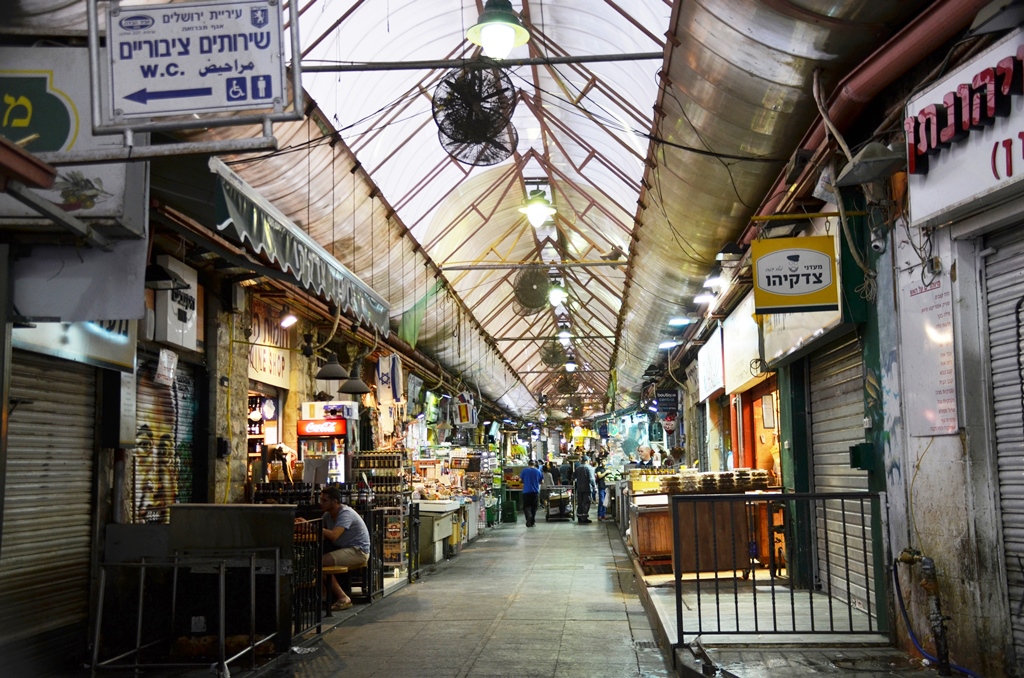 at night close their shutters. 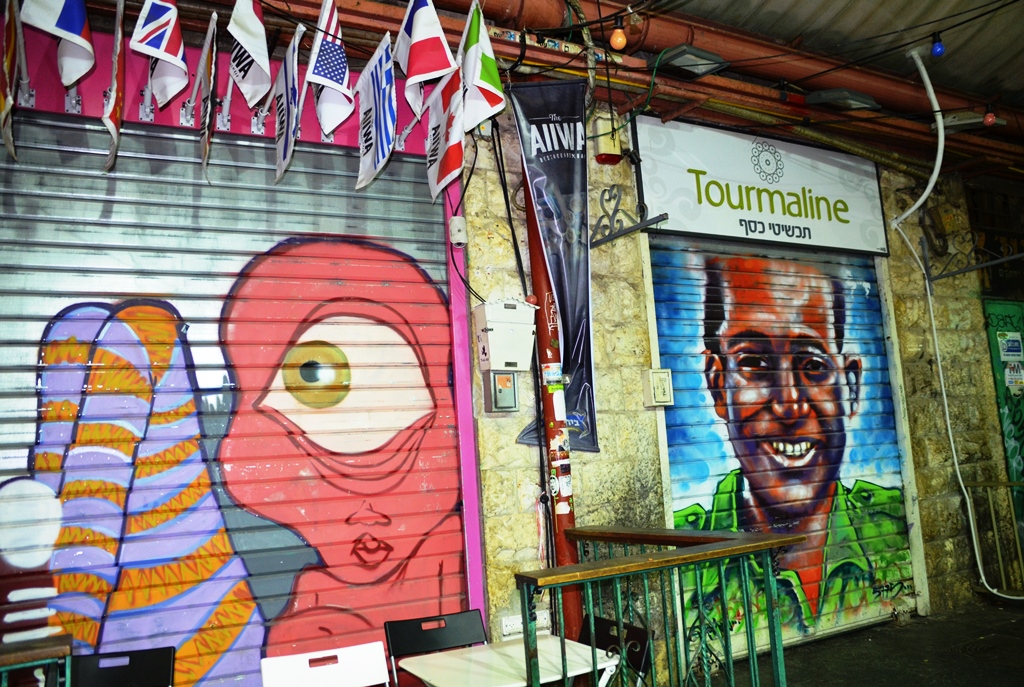 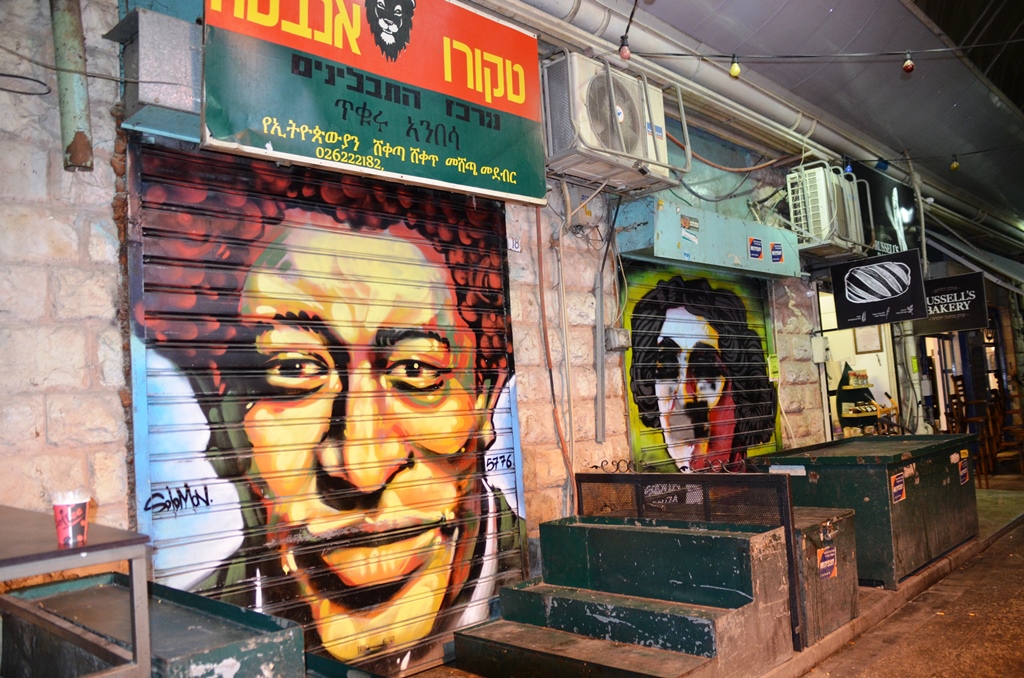 At first shop owners were not pleased. 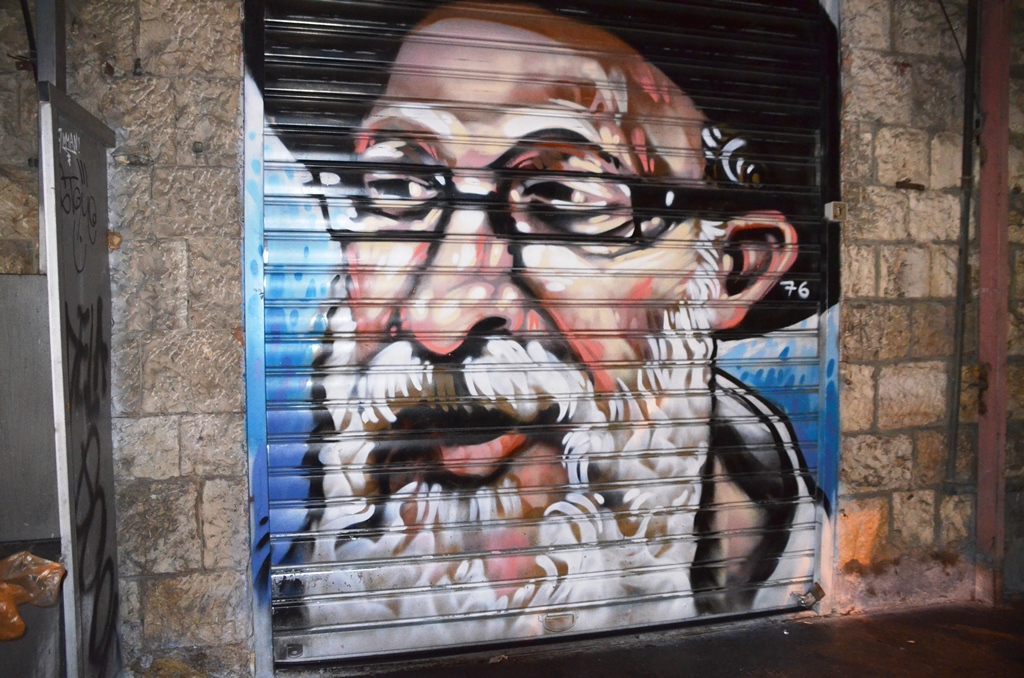 But the works of spray painted art, 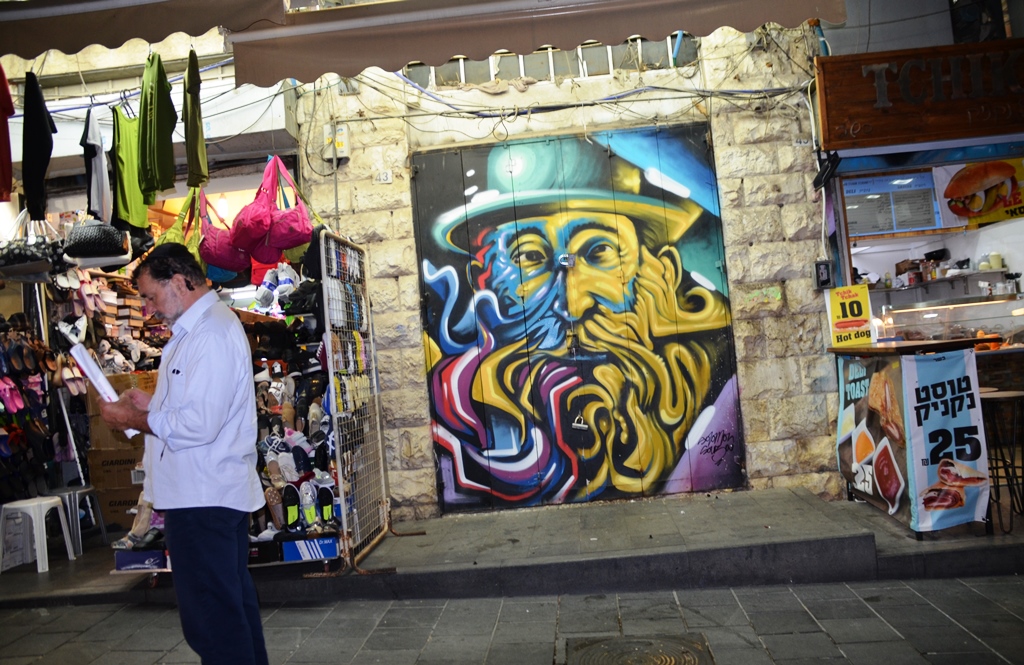 have become a favorite night attraction. 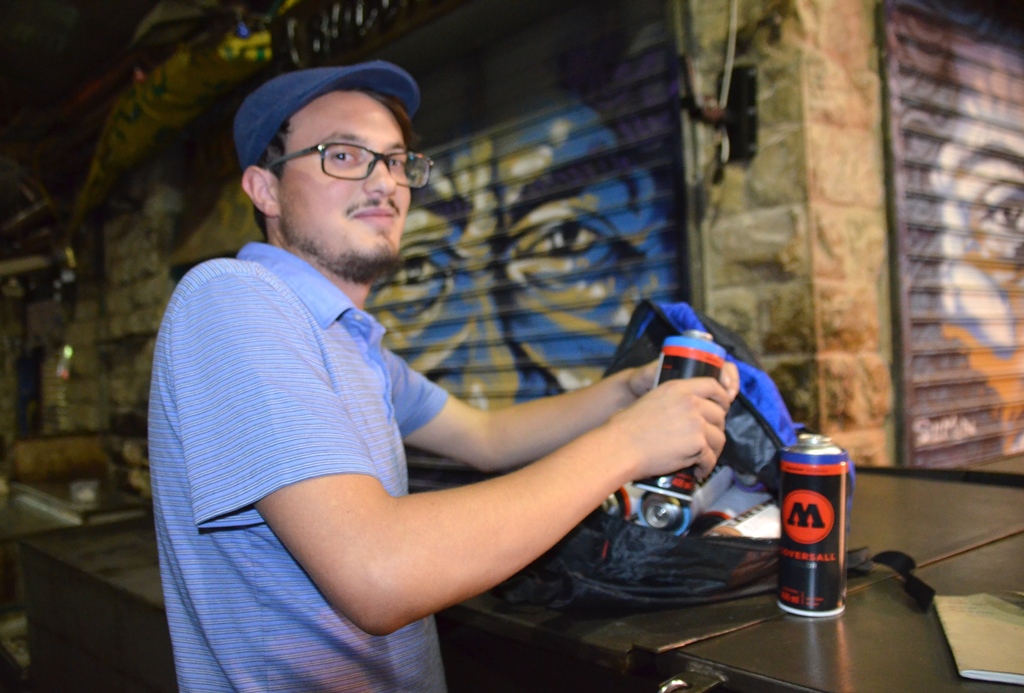 Solomon was ready to fix his Matisyahu portrait.

Since he asked not to show the old one before the do-over,

we will have to get back to the shuk at night

after the holidays to check it out.

Matisyahu is to perform again in Jerusalem on October 13th.

But Solomon Souza is not the only artist busy at night.

We found this man painting on Agrippas Street.

The night life in the area, 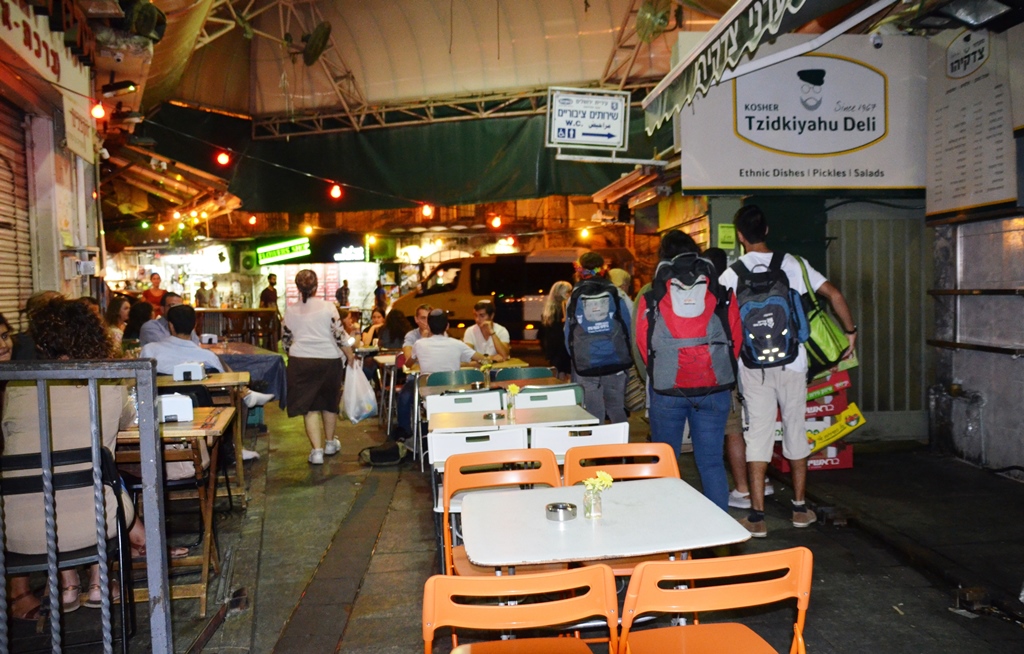 has continued to grow this past year,

crowds of people will fill the tables,

which fill the lanes when the shop keepers go home.

Even more popular than last year,

Tours are offered for those wanting to see selihot

around the Old City and parts of Jerusalem.

Also again this year, a street festival on Emek Refaim,

with sales of used clothing, wares and musical performances. 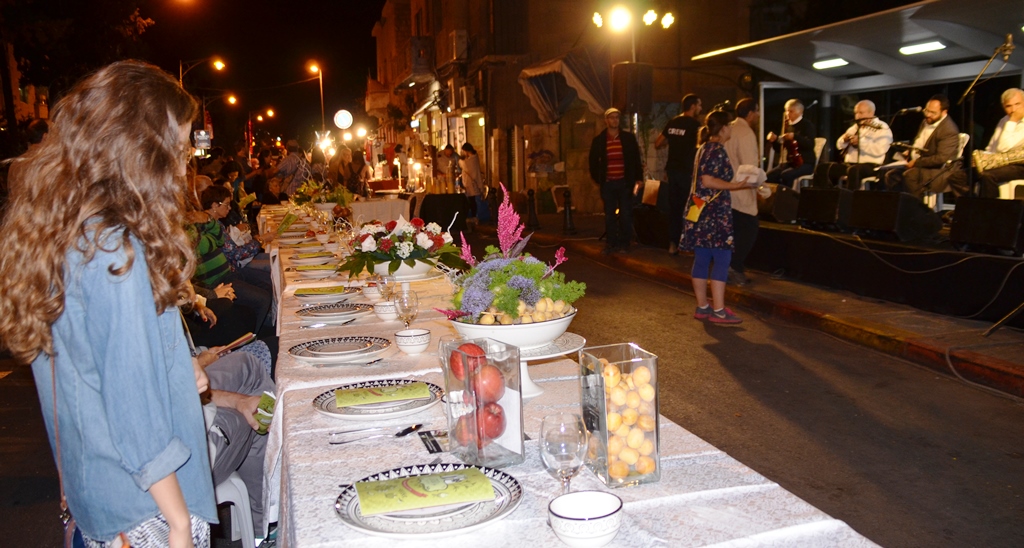 This long table was as set ready for a holiday meal,

but provided seating for those wanting to listen to holiday music. 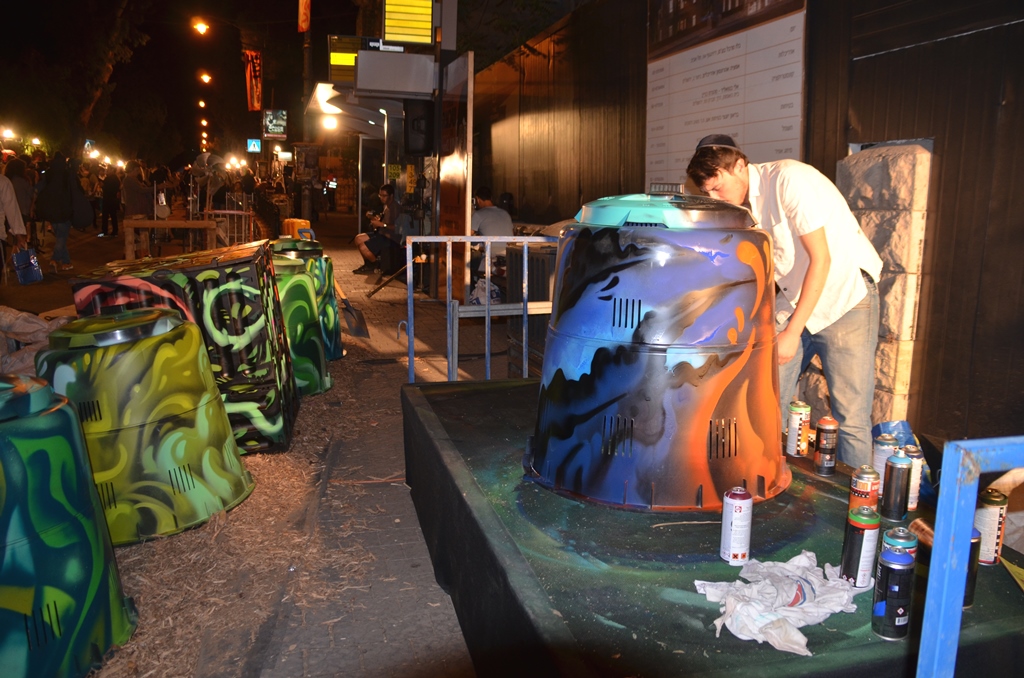 there was Solomon painting compost bins

to be placed in Jerusalem community gardens.

and get the new year off to a good start, 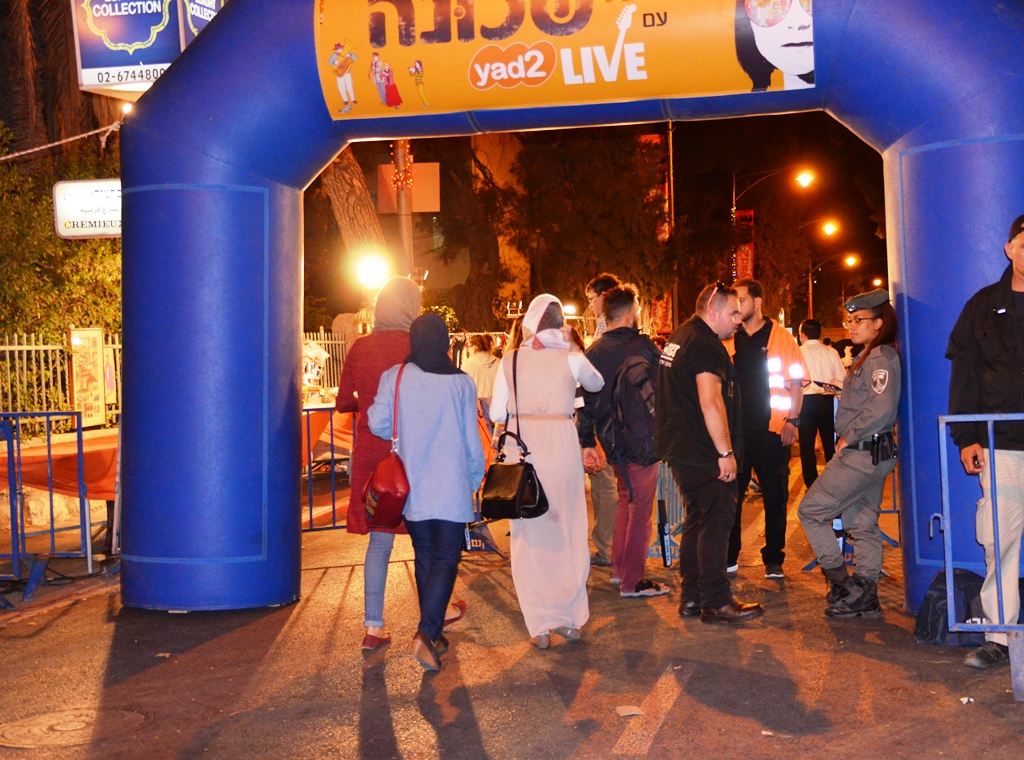 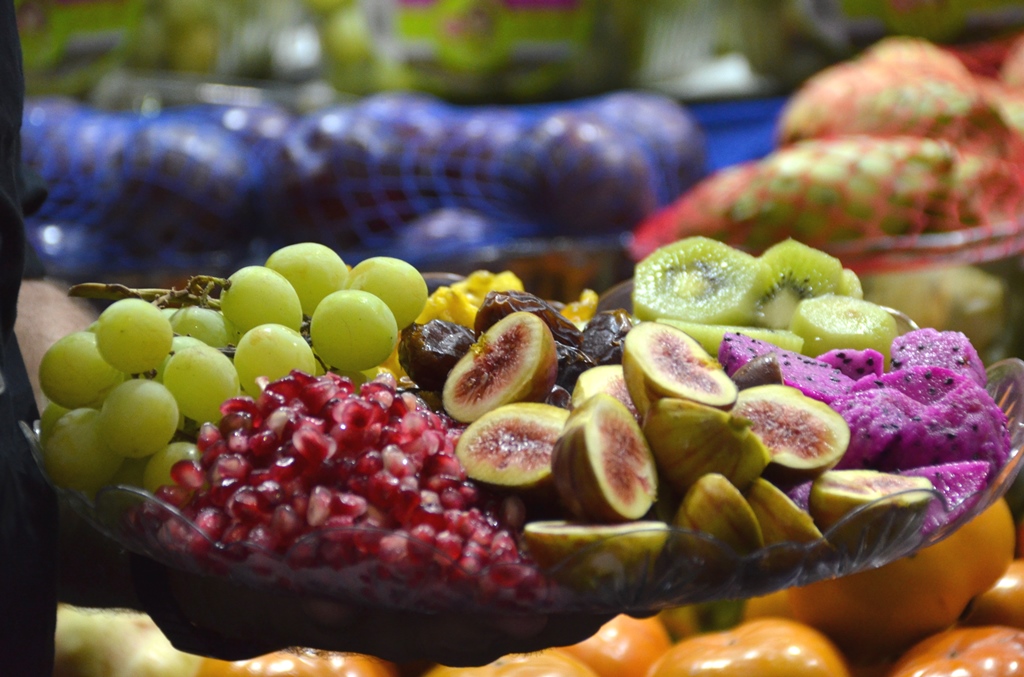 not only of fruits, 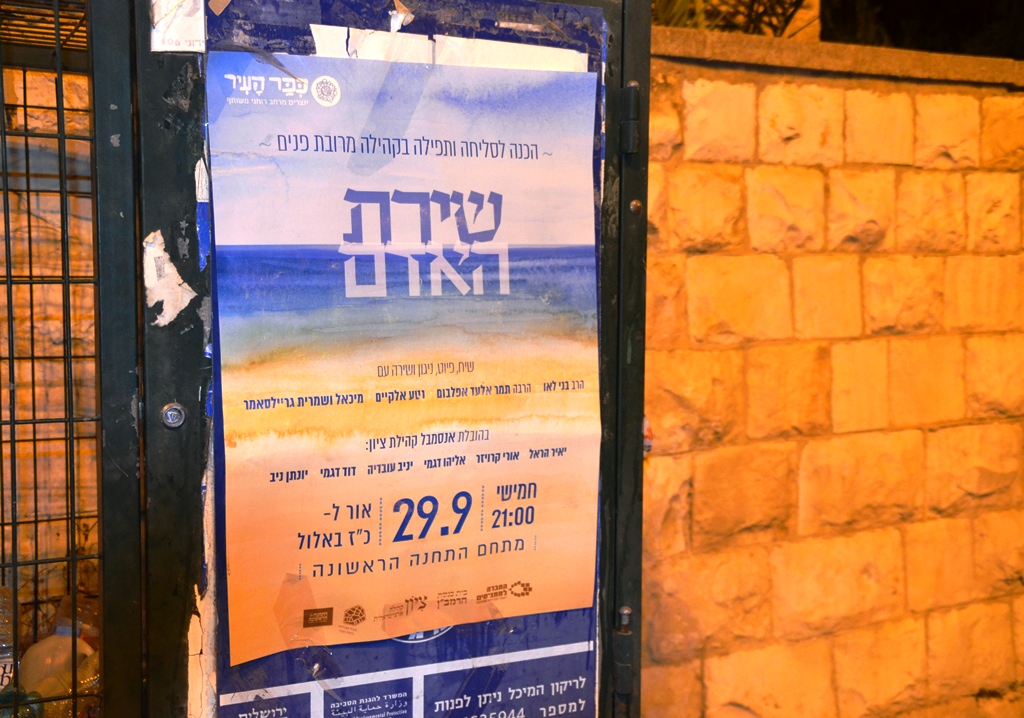 but of holiday programs all week is astounding. 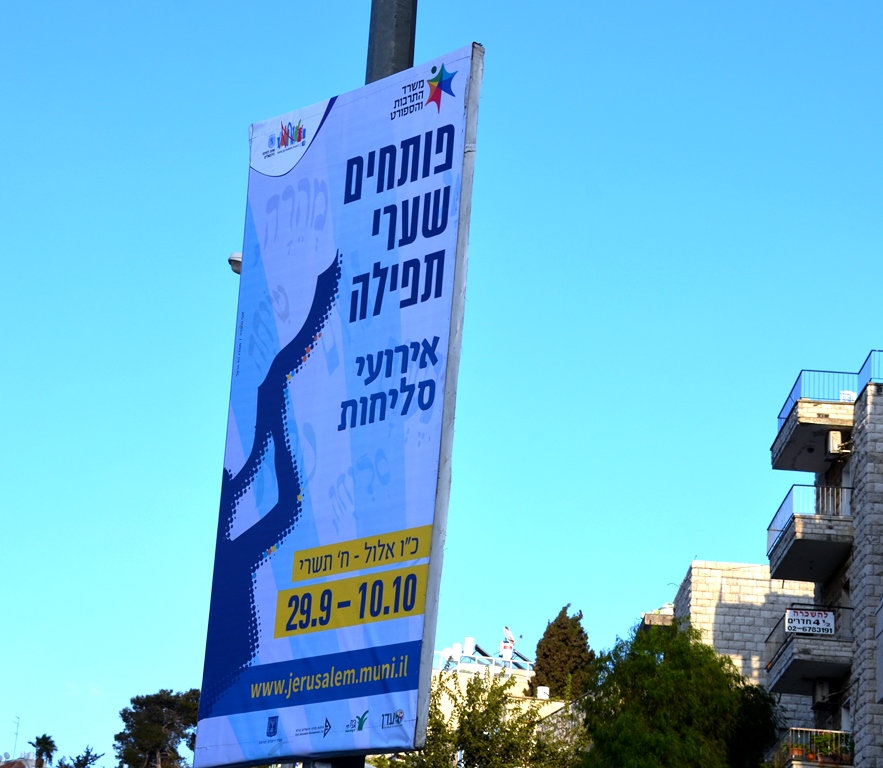 on traditional themes for the new year.

I decided to end with the old favorite,

a good and healthy year to all.