One thing Jerusalem, Israel does not have is a good view of the sea.

An attempt for a beach in Liberty Bell Park was a poor substitute.

So a trip to the coast and the sea was a welcome treat. 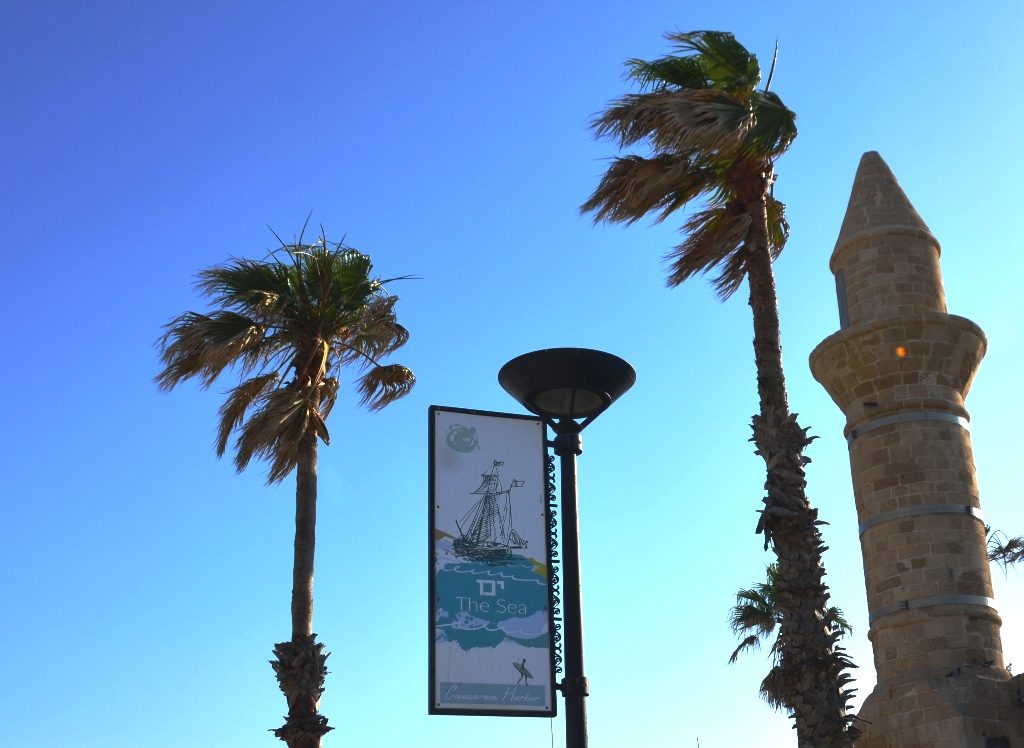 The sign “The Sea” between palm trees greets visitors to Caesarea coastal park. 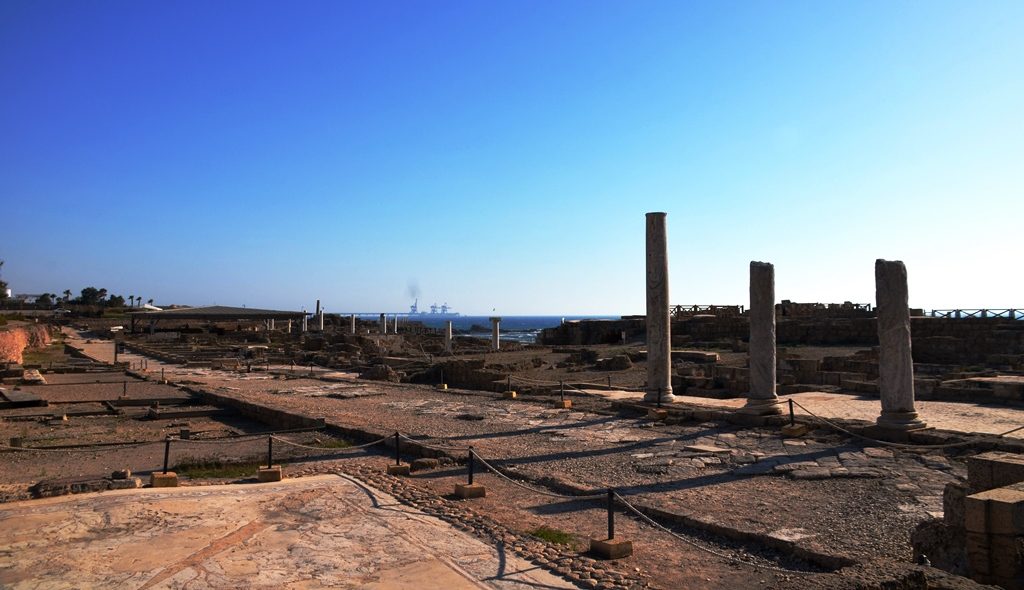 Here part of the remains of Herod’s Sebastos Harbor has been exposed. 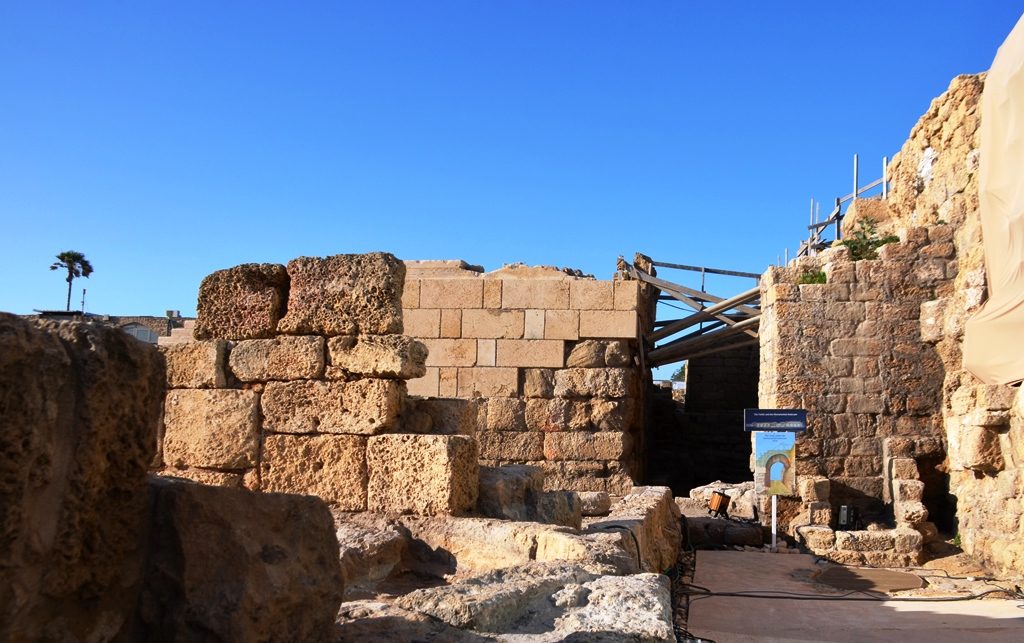 But other portions are being worked on carefully by archaeologists. 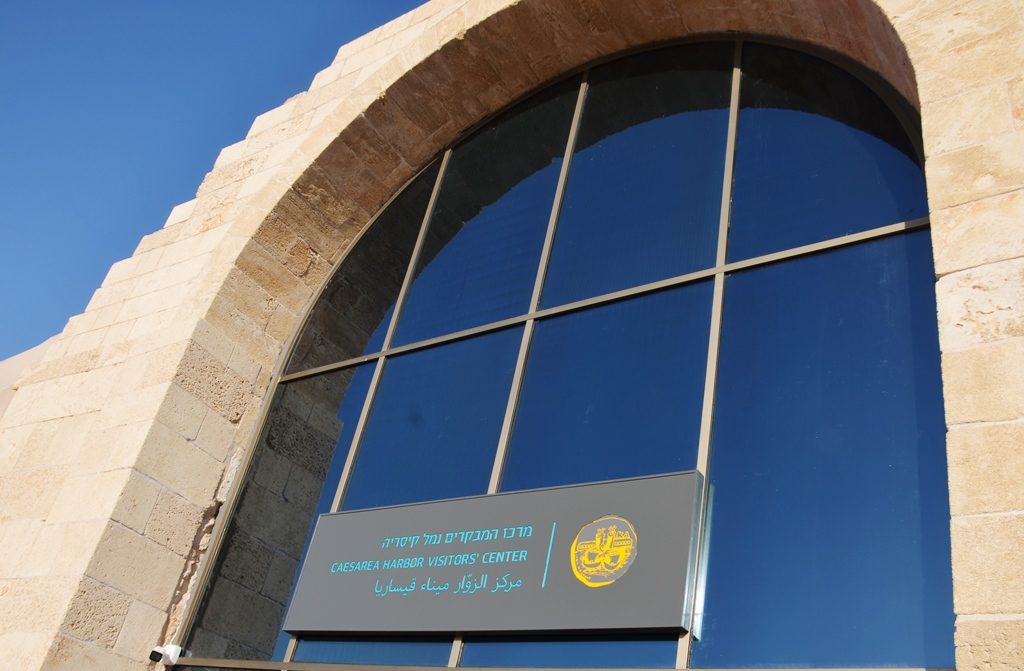 The trip was to attend the launch of the new Visitor Center. 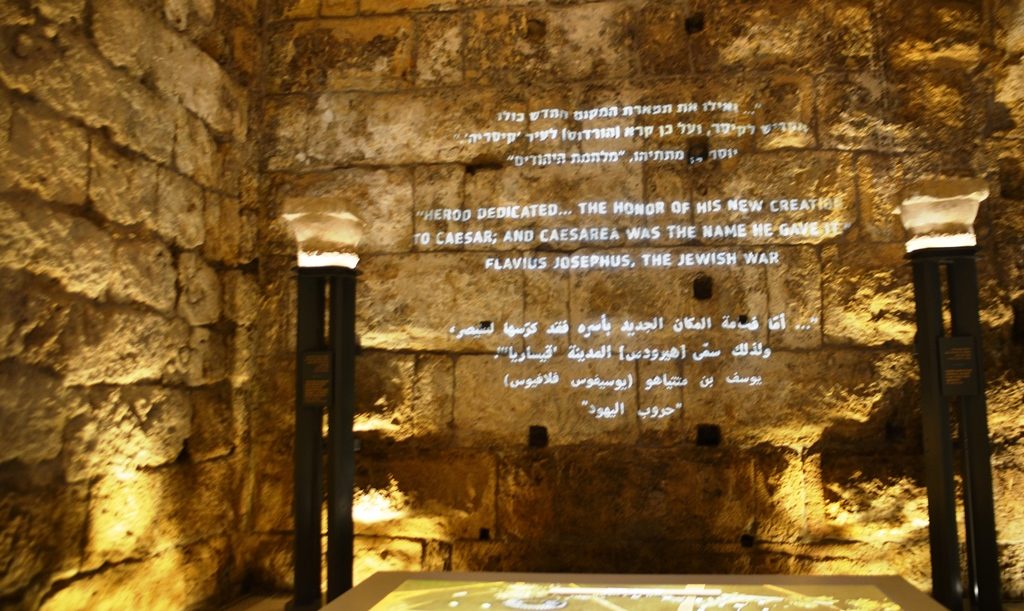 Josephus wrote of Herod’s tribute to Caesar in the first century BCE. 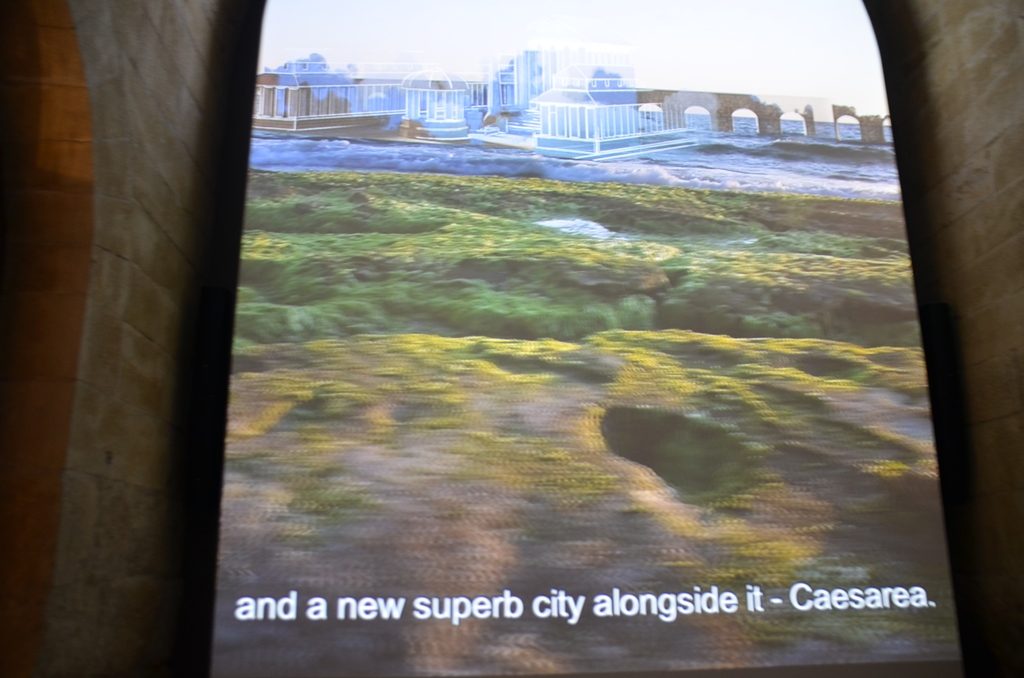 In this photograph from the video in the new Visitor Center video, we see his vision. 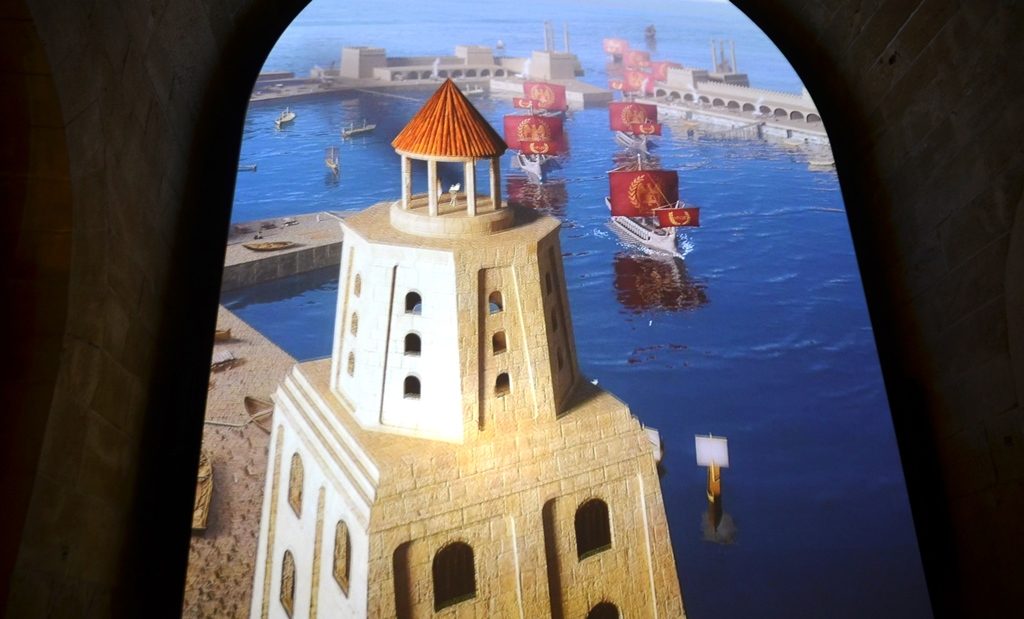 One scene illustrated the hundreds of boats that came through.

Herod’s building project took ten years to complete. Tons open tons of cement went into rafts sunk, along the coast which had no natural harbor.

Herod or Hordus as he is called in Hebrew began globalization in the region. 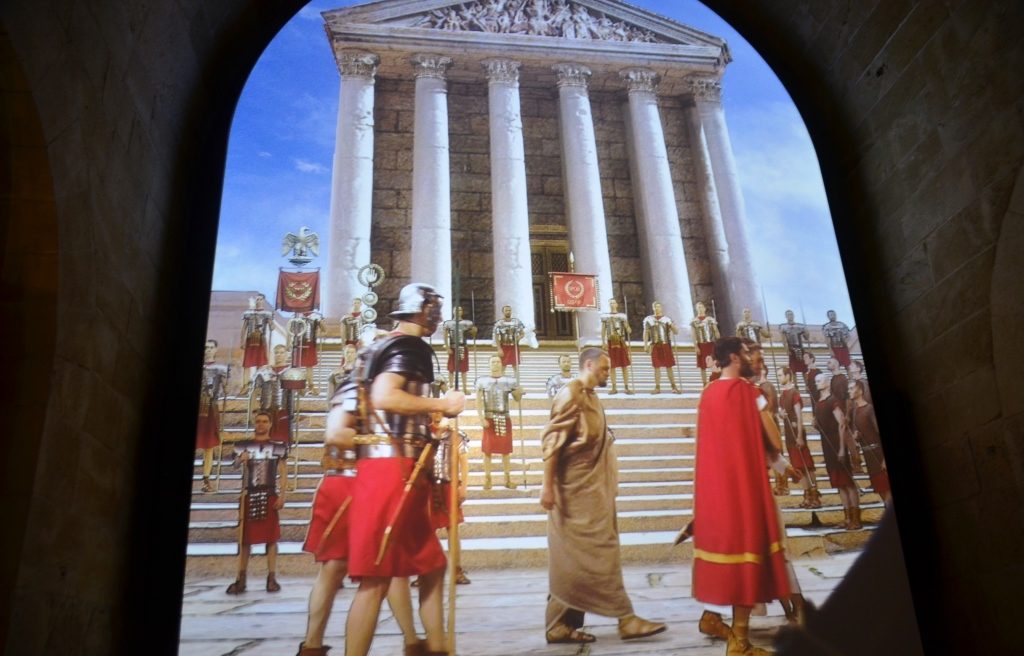 Caesar Augustus attended the gala opening of the one mile long piers and temple. 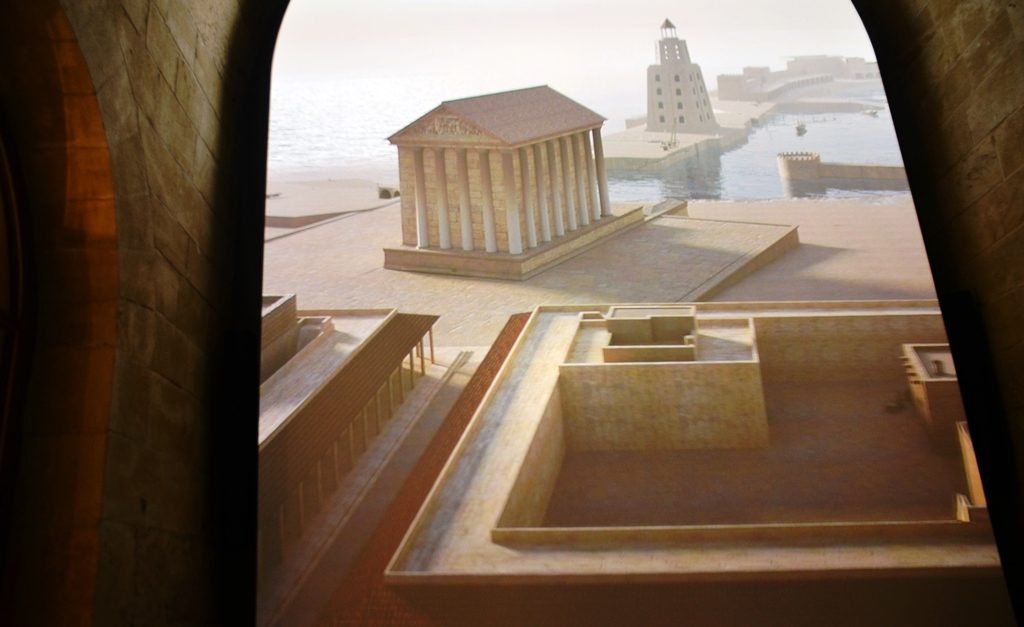 However, this massive building project lay in ruins for 2000 years. 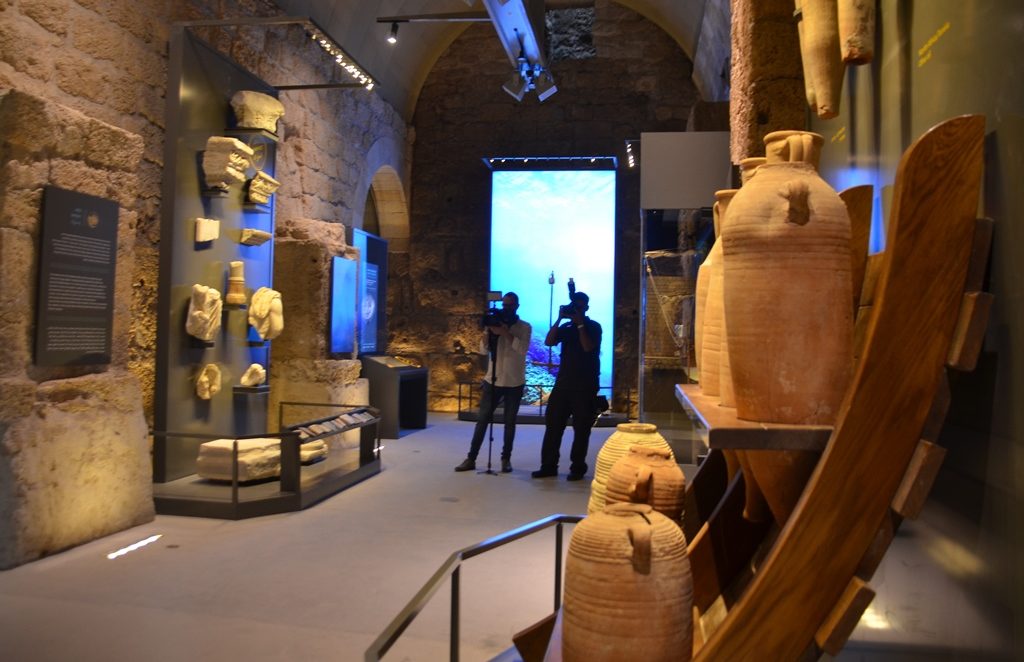 Now, located in one of the fourteen vaults Herod built to support the platform of the temple of Augustus and Roma, the new Caesarea Visitor Center is open to the public.

The once-thriving area was rebuilt and hosted many rulers over the centuries – pagan, Christian, Muslim, Jewish and Samaritan. 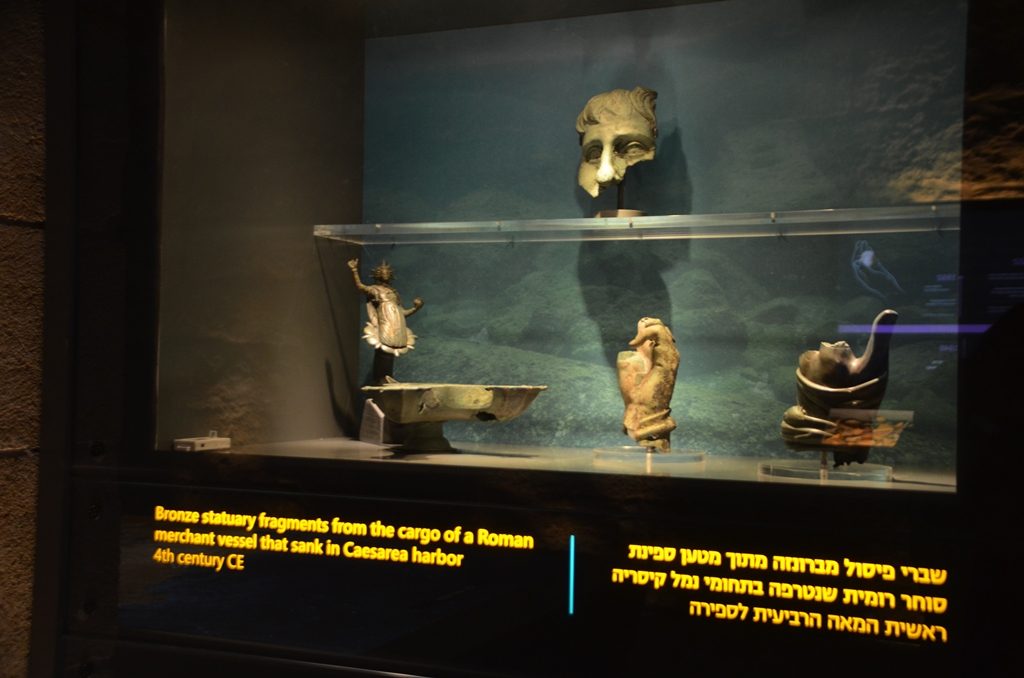 In the museum, artifacts from various periods are on display. 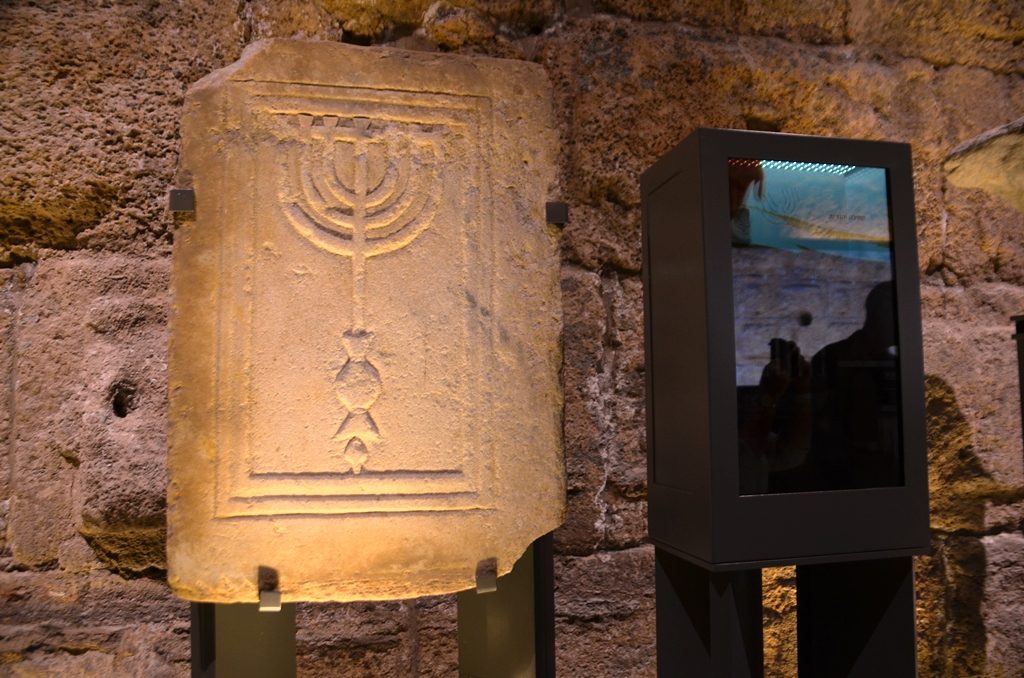 An ancient menorah was placed next to a modern visual box, hard to catch in a photograph. 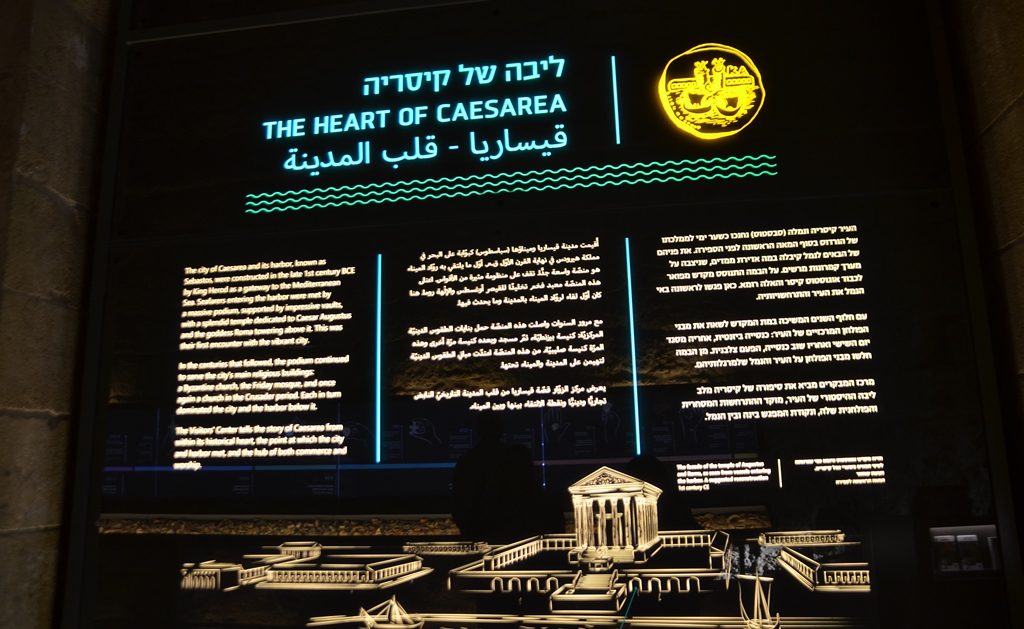 Visuals of the past help the visitor to see how the 60-acre site would have looked.

King Herod’s gateway to the Mediterranean Sea was constructed in the 1st century BCE. 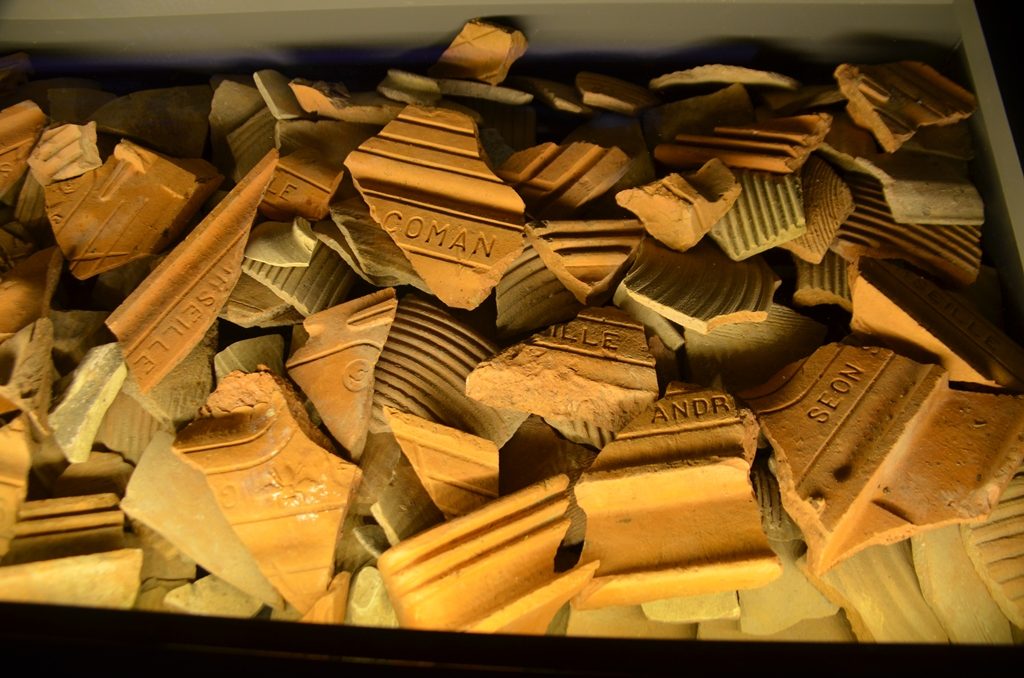 On display are recovered pottery pieces that span the centuries. 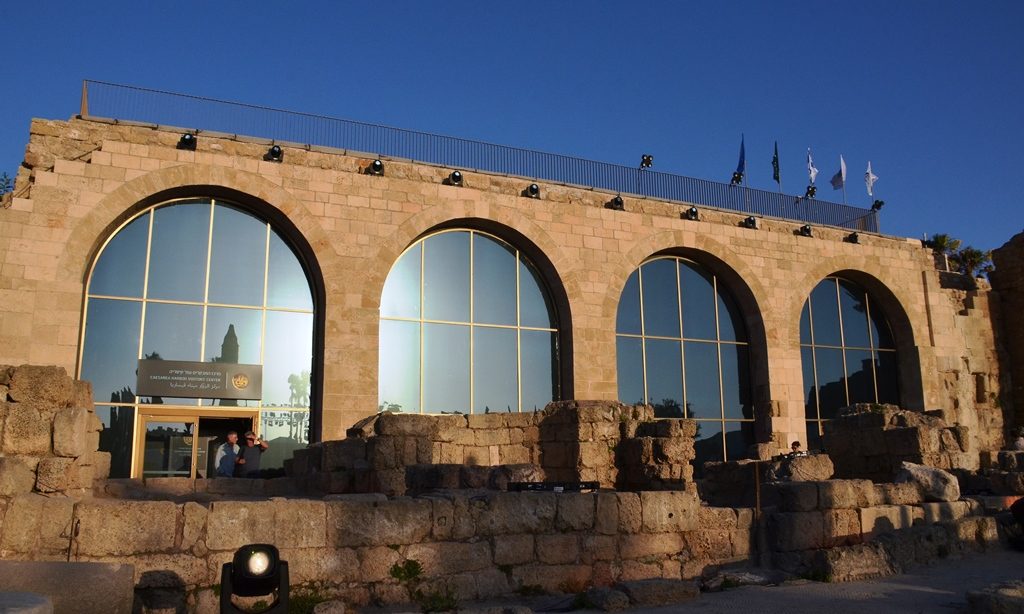 This was the outside of the vault of the Caesarea Visitor Center at sunset, 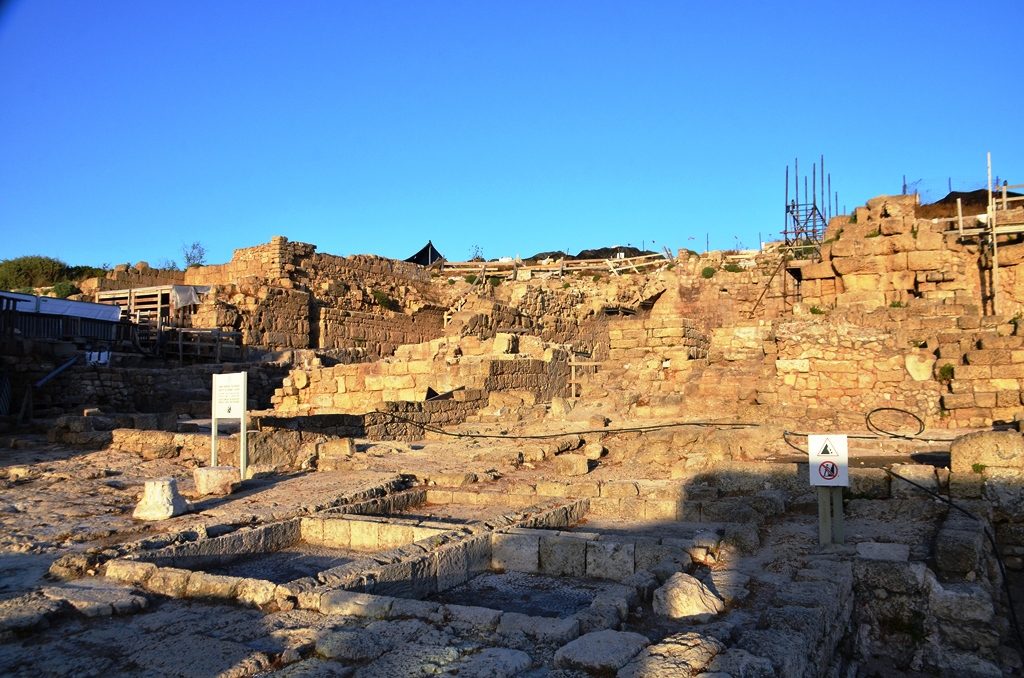 and next to it an area where Roman baths greeted weary seafarers. 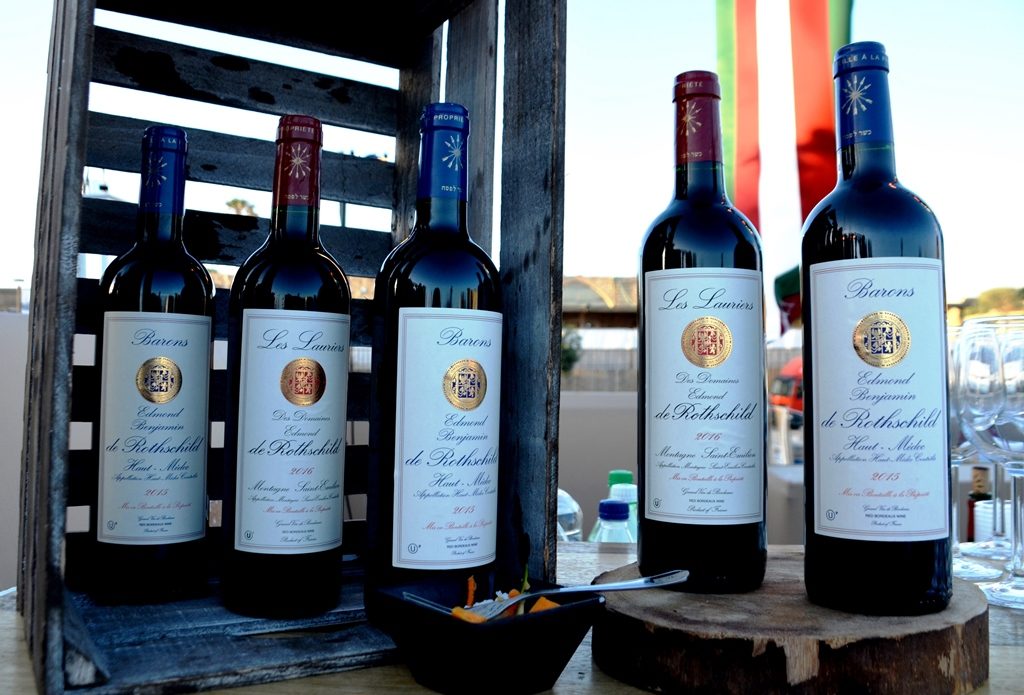 The Caesarea project was funded by the Rothschild Foundation and featured family wine at its launch. 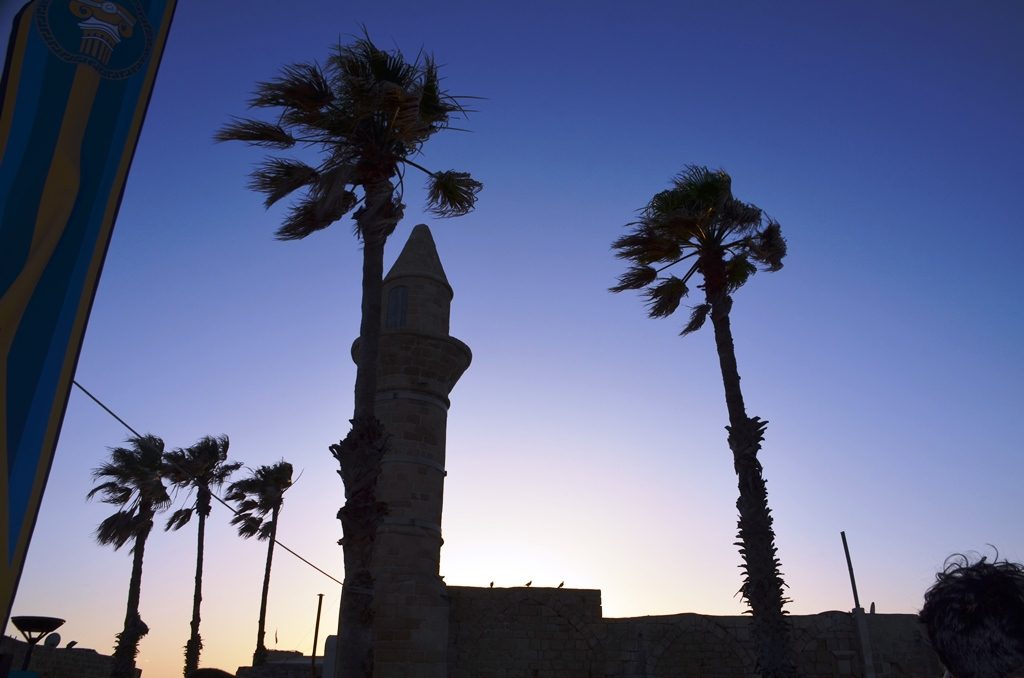 As the sun set, this was as close to the beach as I could get.

Because of the tight security, I was afraid if I left I might not get back in. 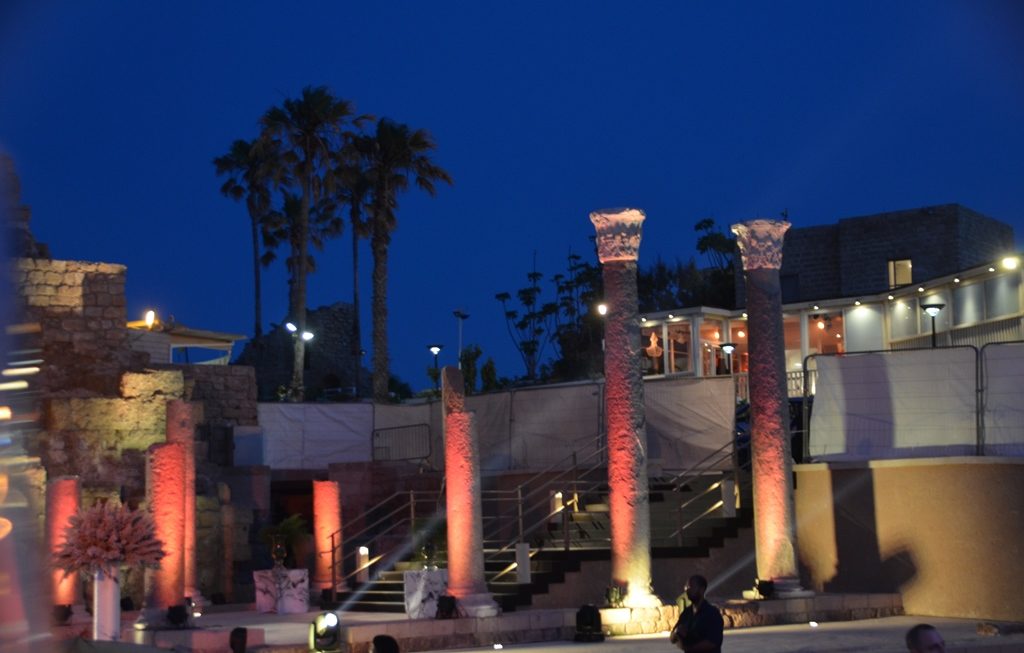 The lights went on, the program began. 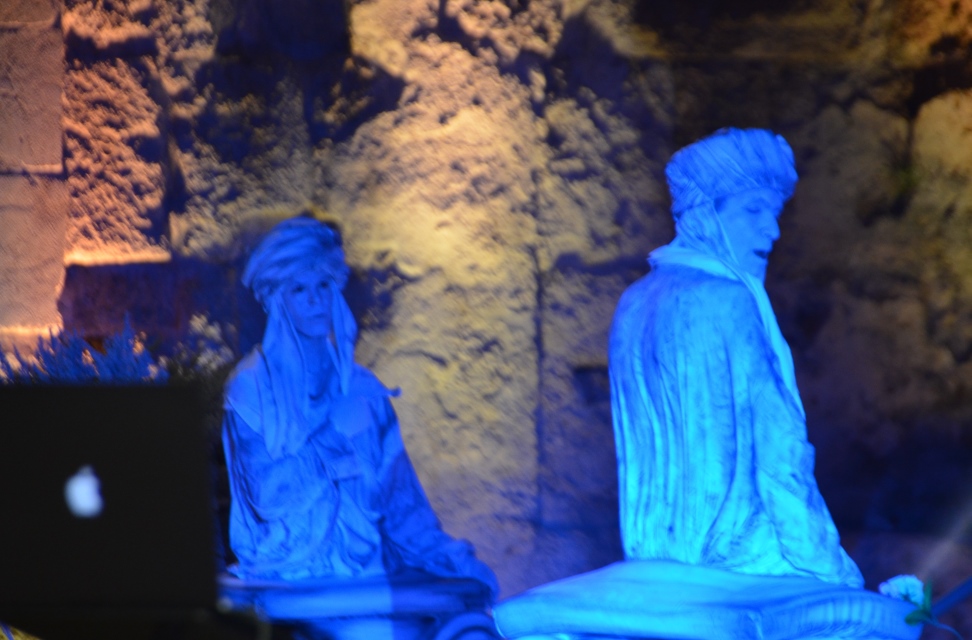 Musicians played and the statues turned. Oh my, they turned out to be live performers. 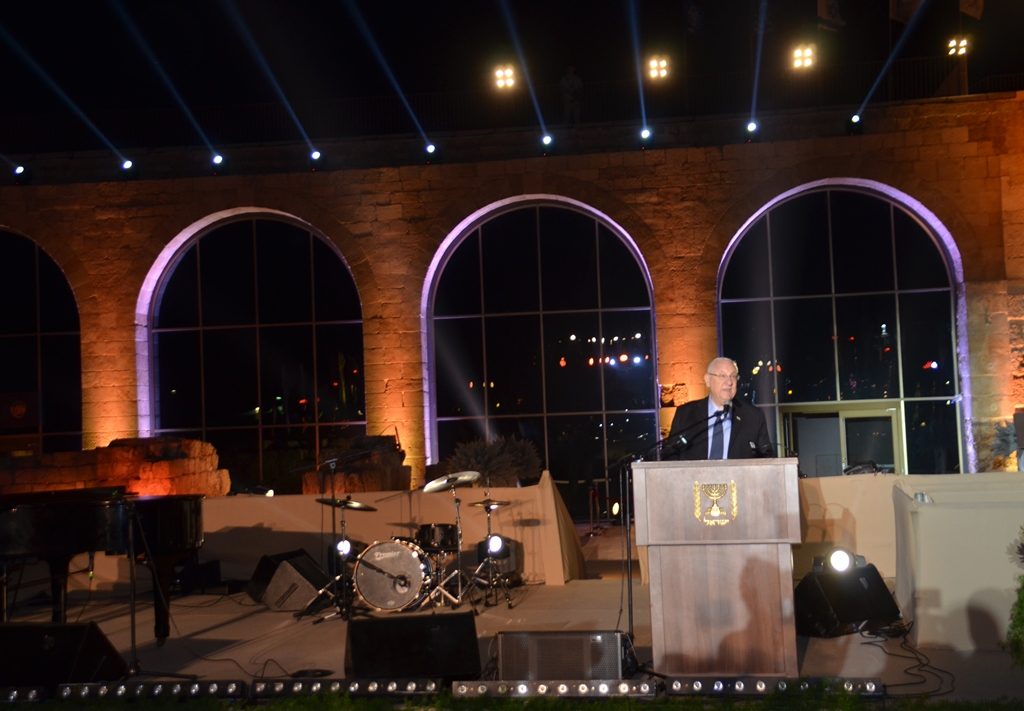 President Reuven Rivlin arrived after a tour of the new museum and spoke. 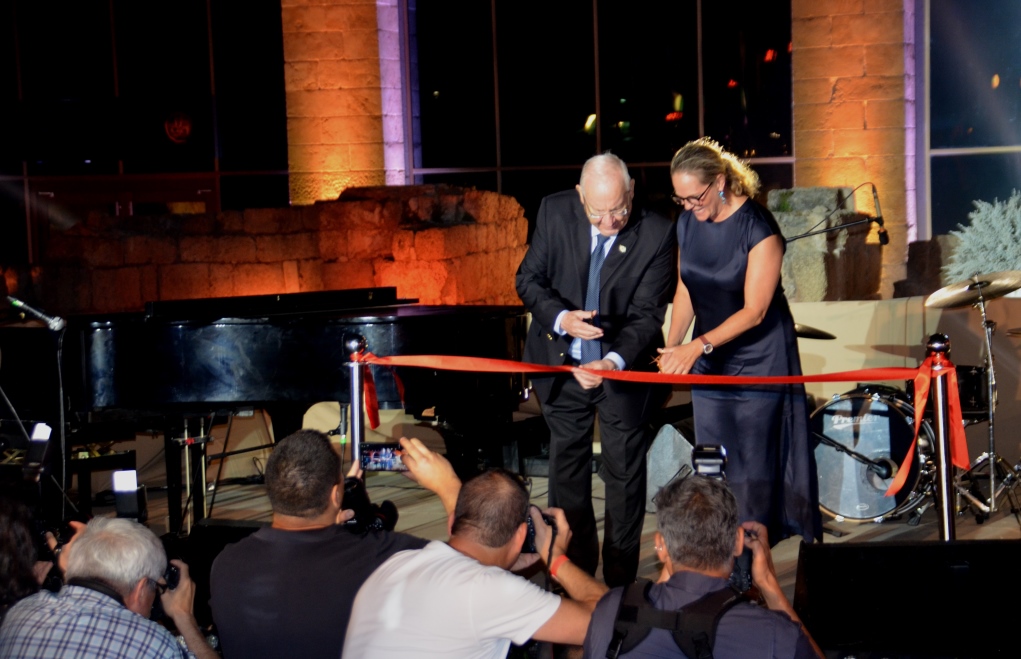 Cutting the ribbon with Baroness Ariana de Rothschild before he headed back to Jerusalem.

Then the party and music really got going.

Perhaps that is why the neighbors were invited along with media and dignitaries? 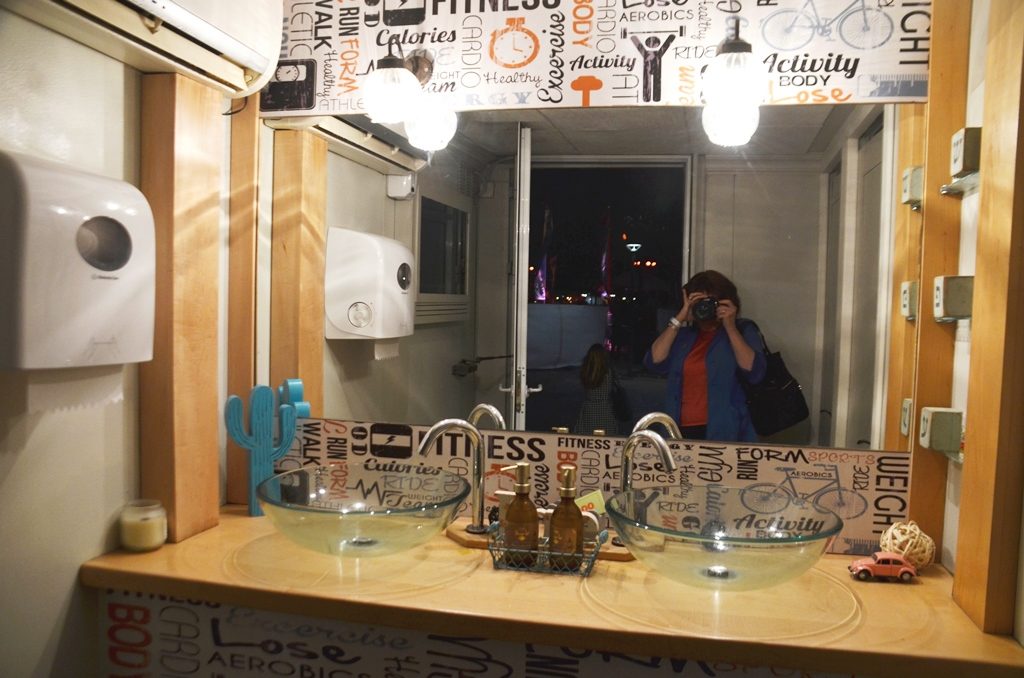 Though I do not usually take selfies, this outdoor portable toilet fit for royalty needed a photo. Sorry, I cannot share the pleasant smell. This was not your usual portaloo.

The Caesarea harbor is to be once again a major stop for visitors.

I took a short clip from the video, which should be the first stop on a visit to the new Caesarea Visitor Center.

King Herod. King of Judea. Hard to describe in a few words in a blog.

Visitors can now experience parts of his story in Caesarea.

5 thoughts on “King Herod of Judea-Builder of Caesarea”