Celebrations for Israel at 70 started early and keep going.  In Jerusalem, blue and white flags will be flying until after Yom Yerushalayim  on May 13.

Before the best of Yom Haatzmaut, Independence Day, one has to experience Yom HaZikaron, the day to remember fallen soldiers and victims of terror. 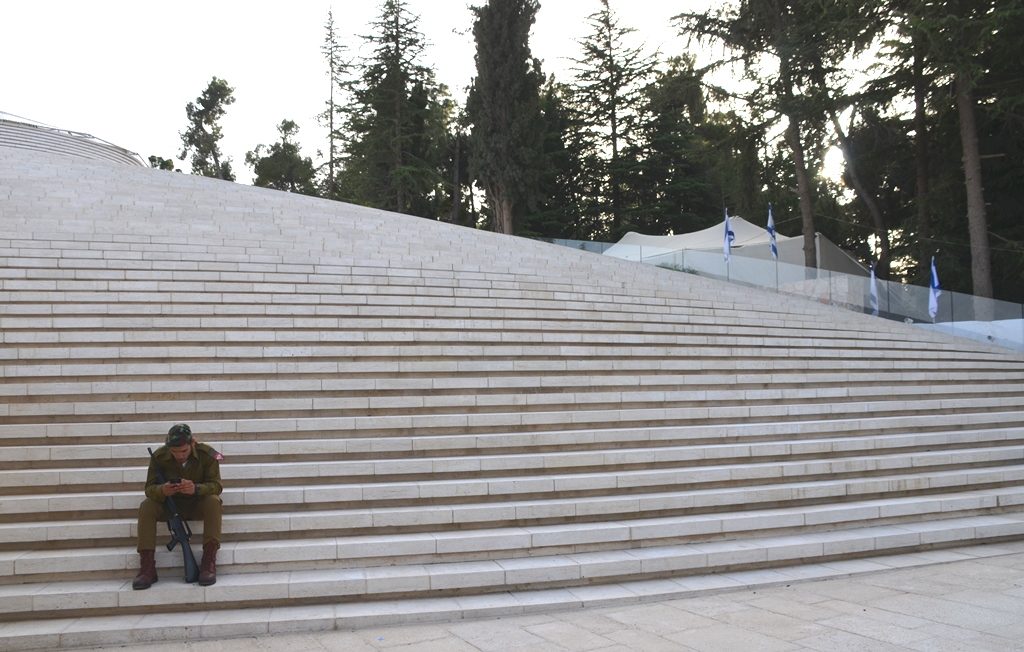 As Yom HaZikaron came to a close, a soldier sat quietly on the new memorial in Har Herzl military cemetery. During the day thousands of people visited graves on Har Herzl and official ceremonies were held. 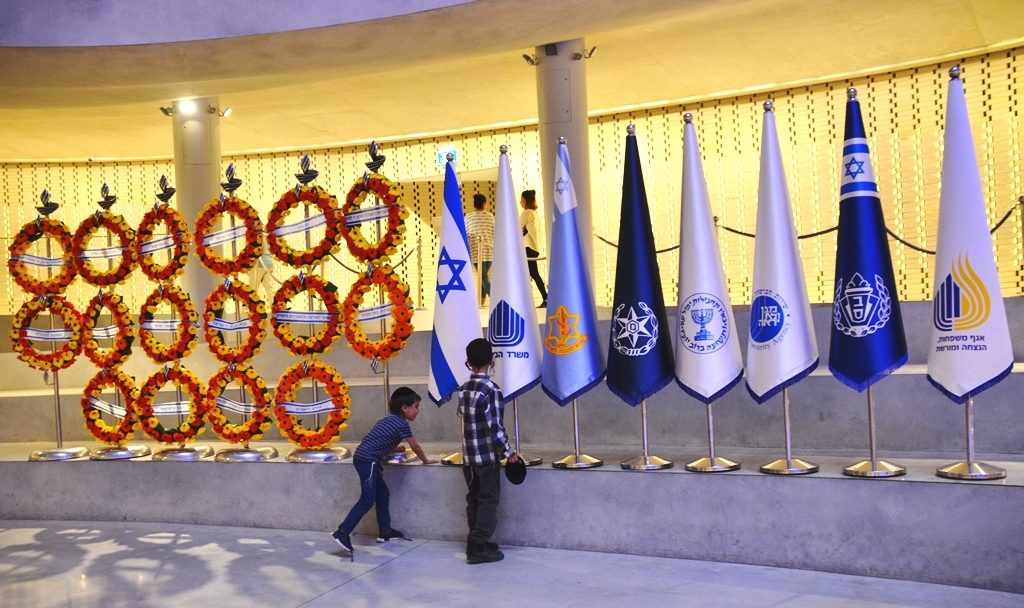 Inside, the memorial wreaths and flags were on display from ceremonies earlier in the day. 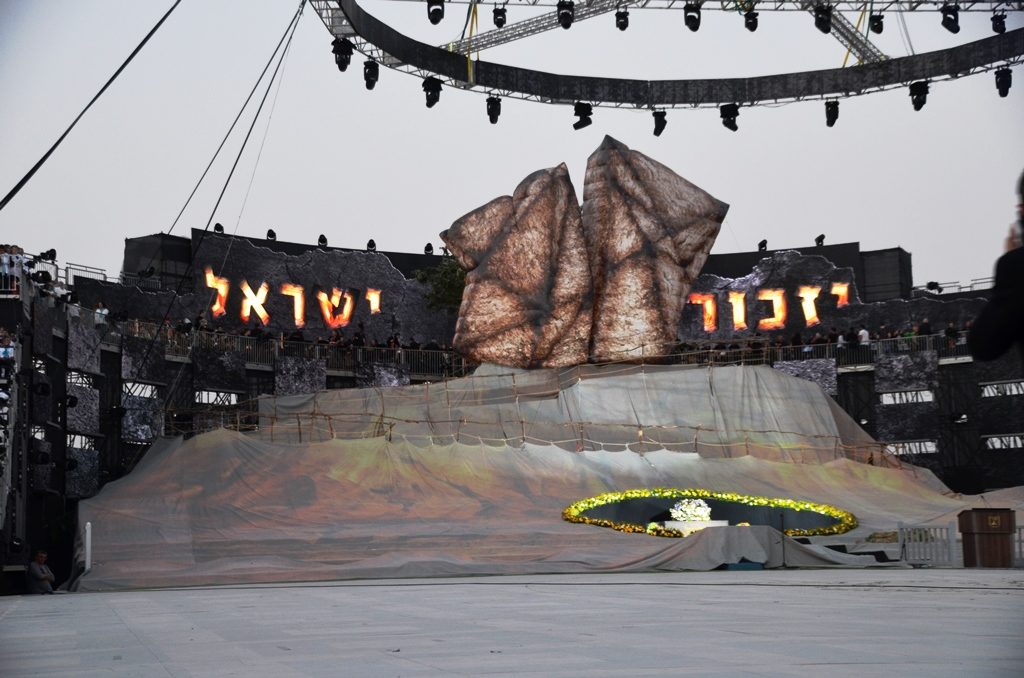 The official opening state event for Yom Haatzmaut  is held each year near the top of Har Herzl, near Herzl’s grave, and also begins with Yizkor, remembering. 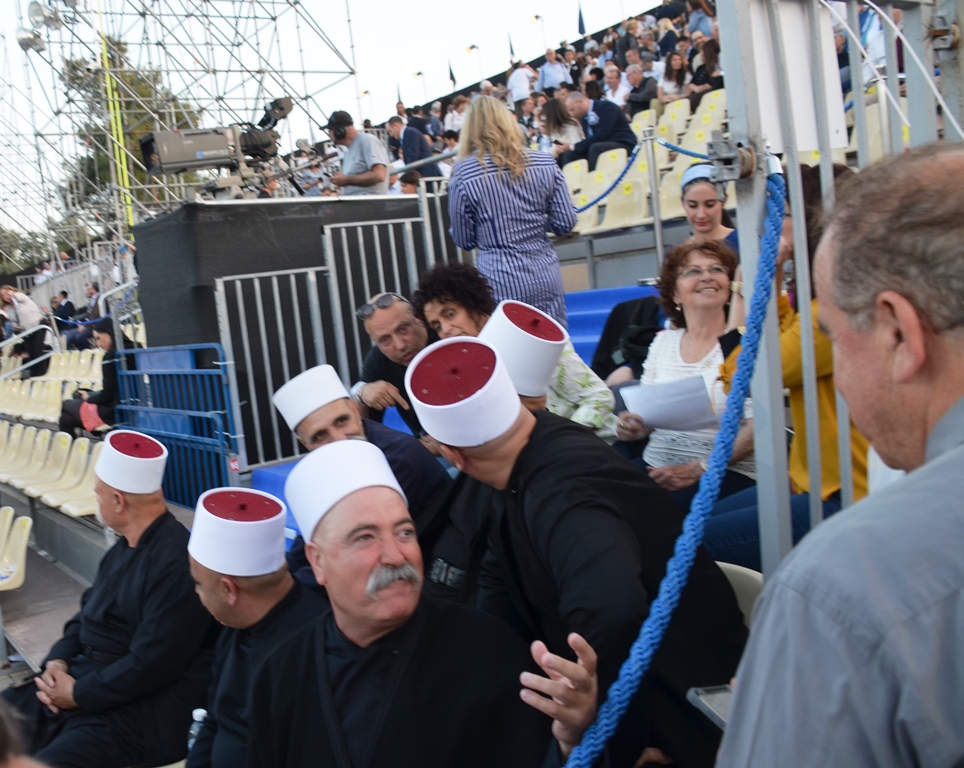 This year one of the twelve honorees to light the torches in the ceremony was a leader of Israel’s Druze community. His fellow Druze leaders came early and had seats in a prime location. 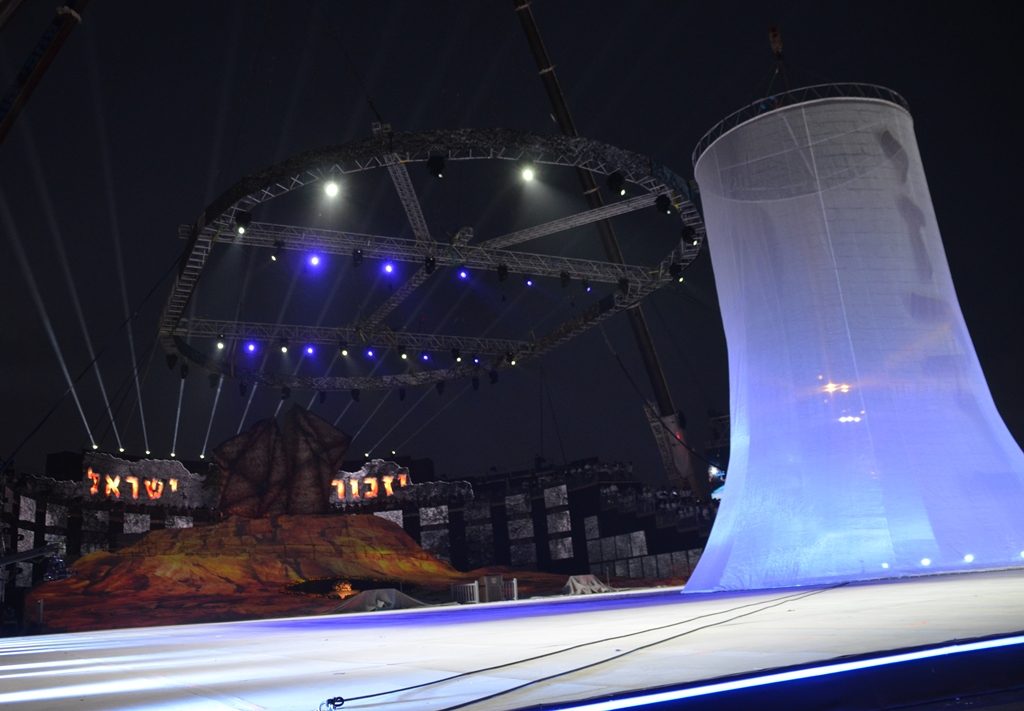 As darkness fell, the word Yizkor was screened on this large fabric pillar. As the prayer was recited images were projected onto it. 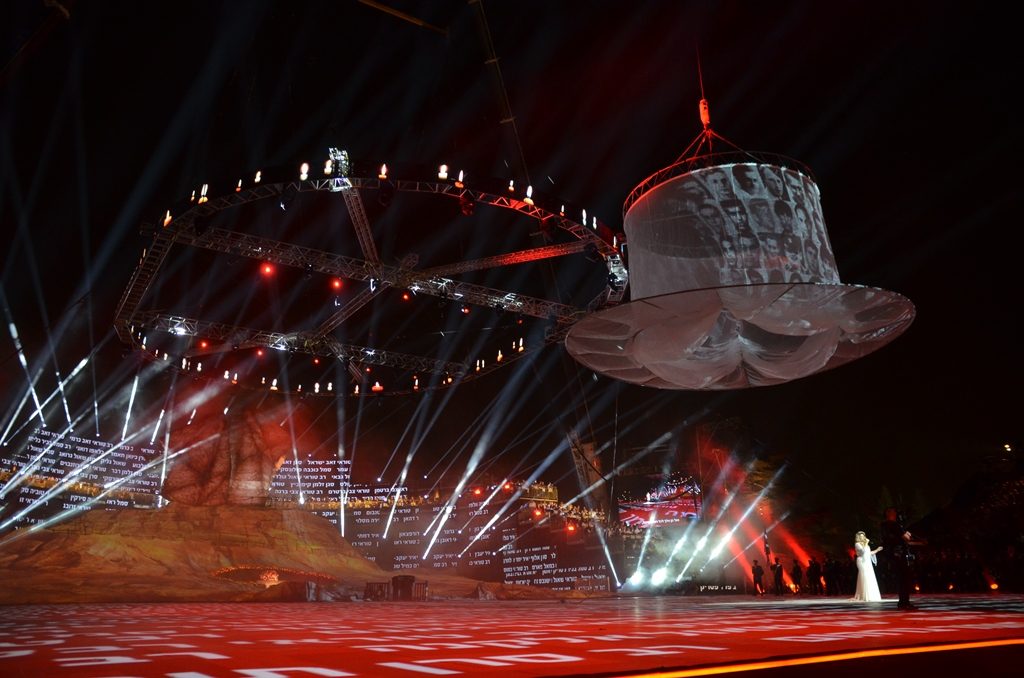 But then the mourning turned to celebrating. The pillar went up and the music and singing began. 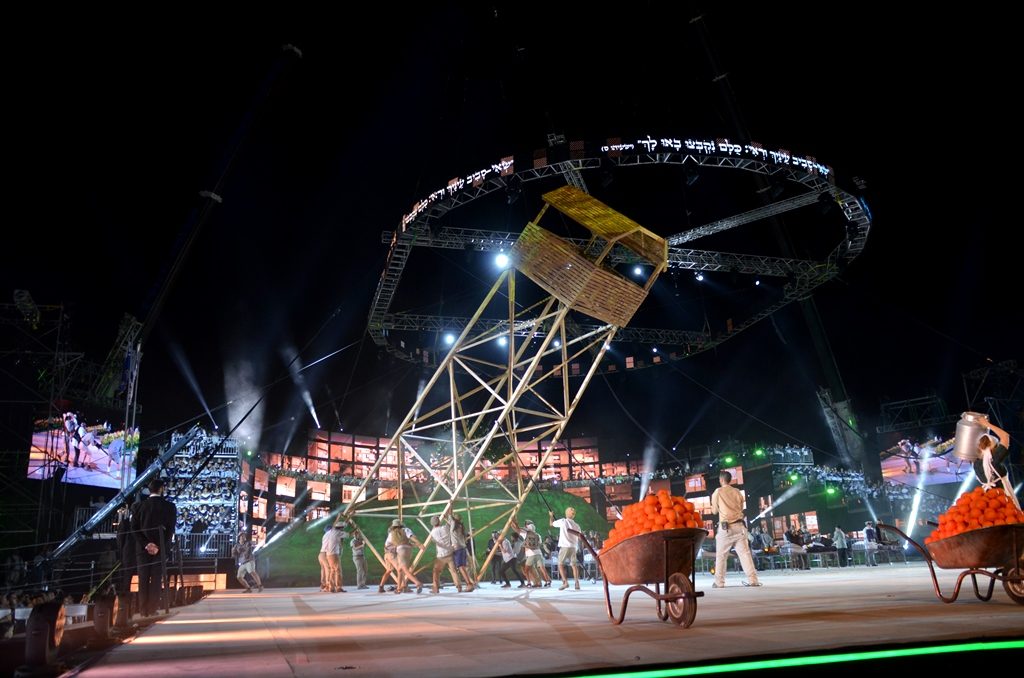 The stage was huge. The entire show was televised, and multiple cameras highlighted the elaborate setups for production numbers involving hundreds of performers, choirs, with children dancing and singing along with adult actors. Here a tower is almost in position. A man waving an Israeli flag will stand there for part of the act. 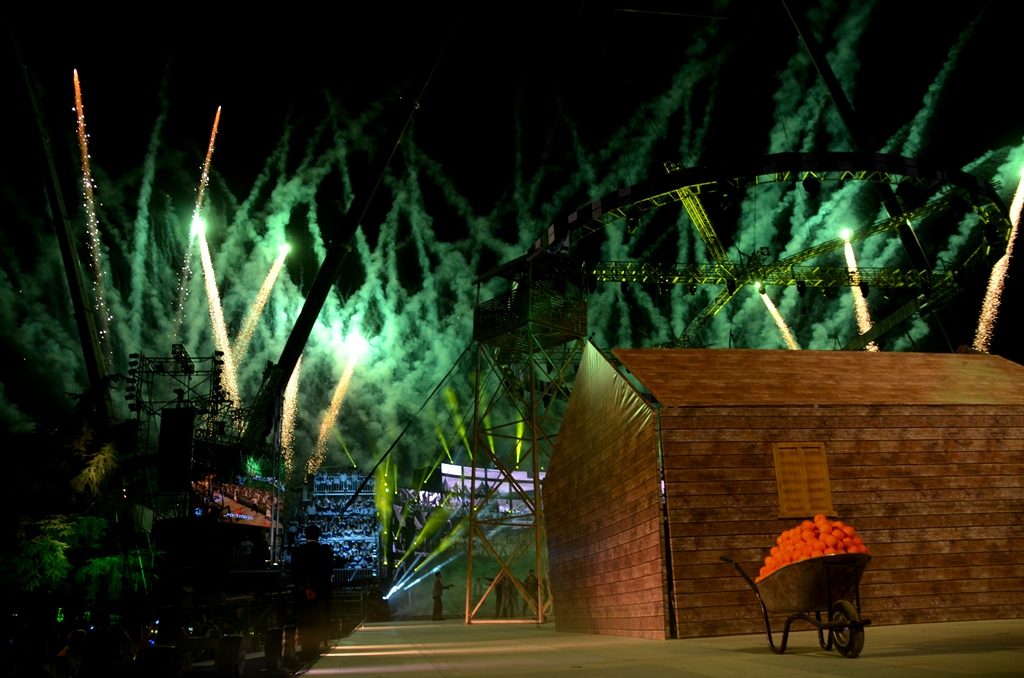 The press platform had not only the pillar in front of it blocking the view, but then a house was put up as well.  However, the fireworks, even thought partially obscured from view, were still impressive. 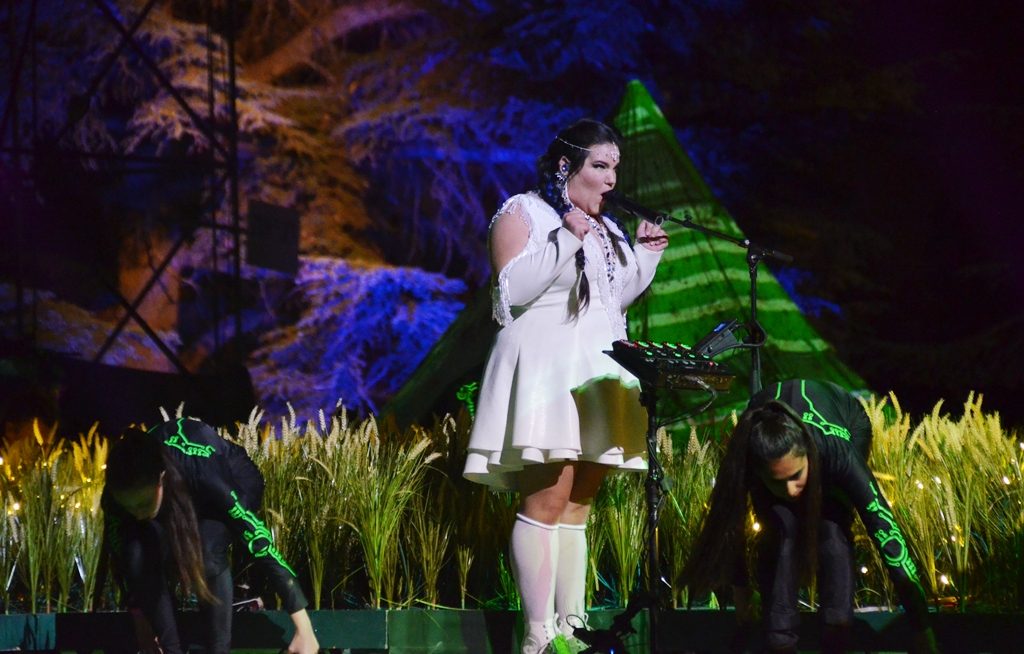 Netta Barzilai is the new Israeli singing sensation who is to perform the song “Toy” soon in the Eurovision song competition. She appeared in the midst of what looked like a field.   One advantage of being close to the stage was being able to see the stage hands dressed in black on each side of her as she sings, getting ready to move off stage. 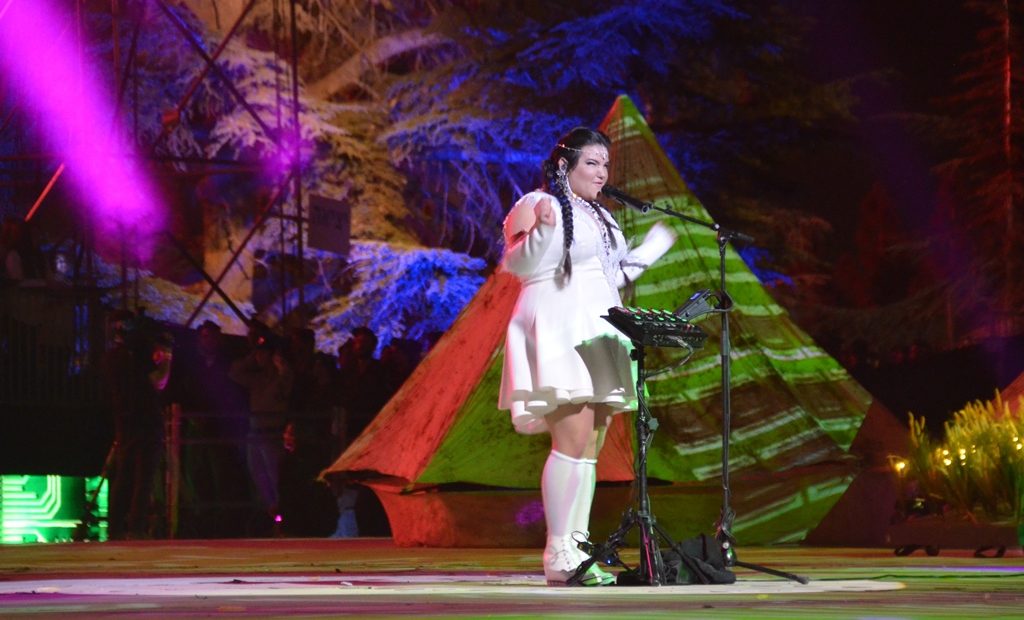 The workers cleared the props from previous acts which depicted the past 70 years of Israeli history. When Netta finished her number, security whisked her away through the audience. 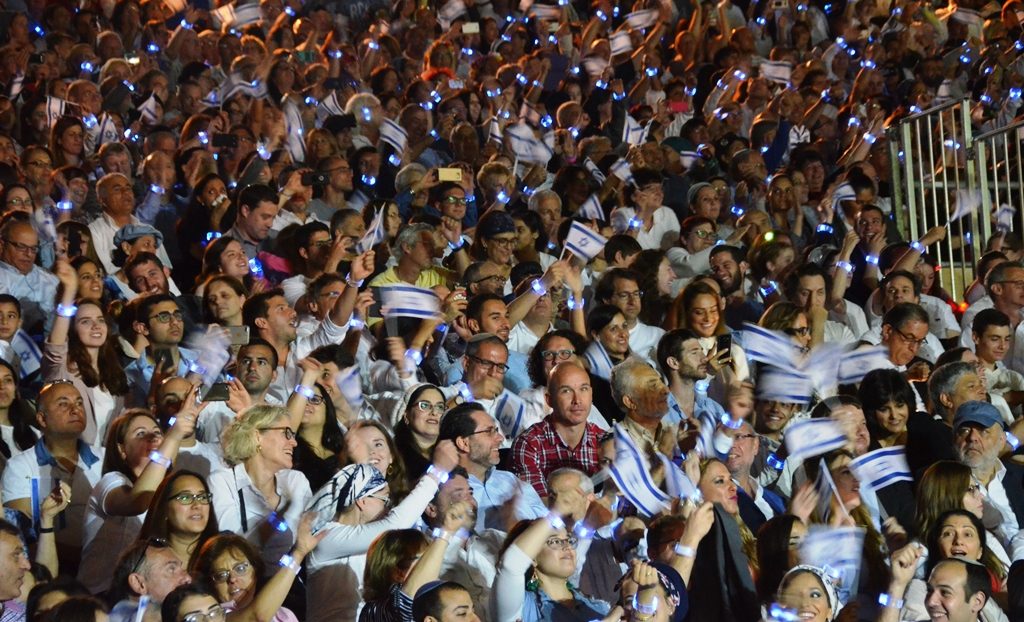 The hard-to-get-invitation-only audience received flags and special light bracelets when they entered the stadium, through many levels of security. 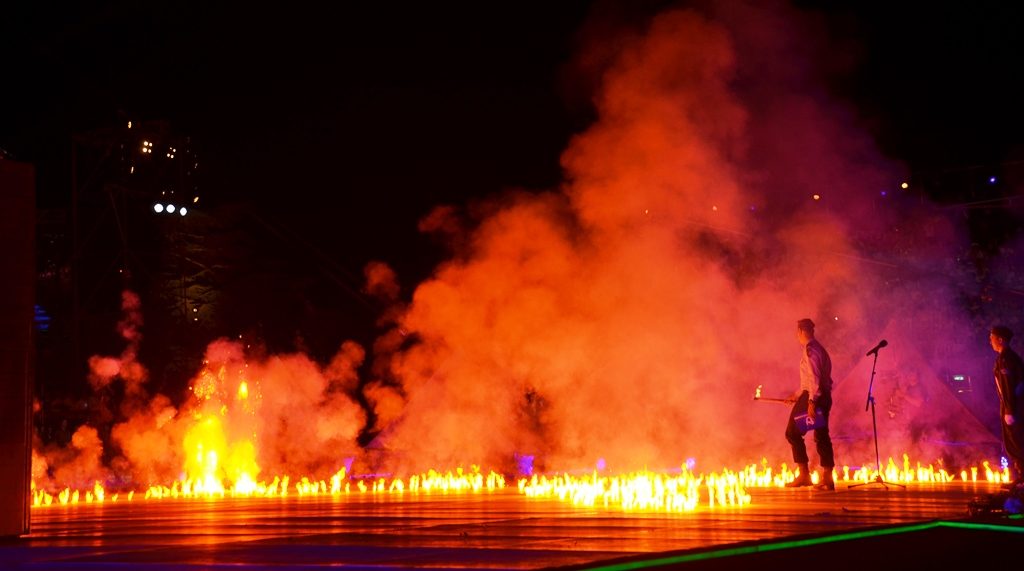 As usual there was fire in one act. However, as impressive as it was at stage level, it was meant for TV viewers. 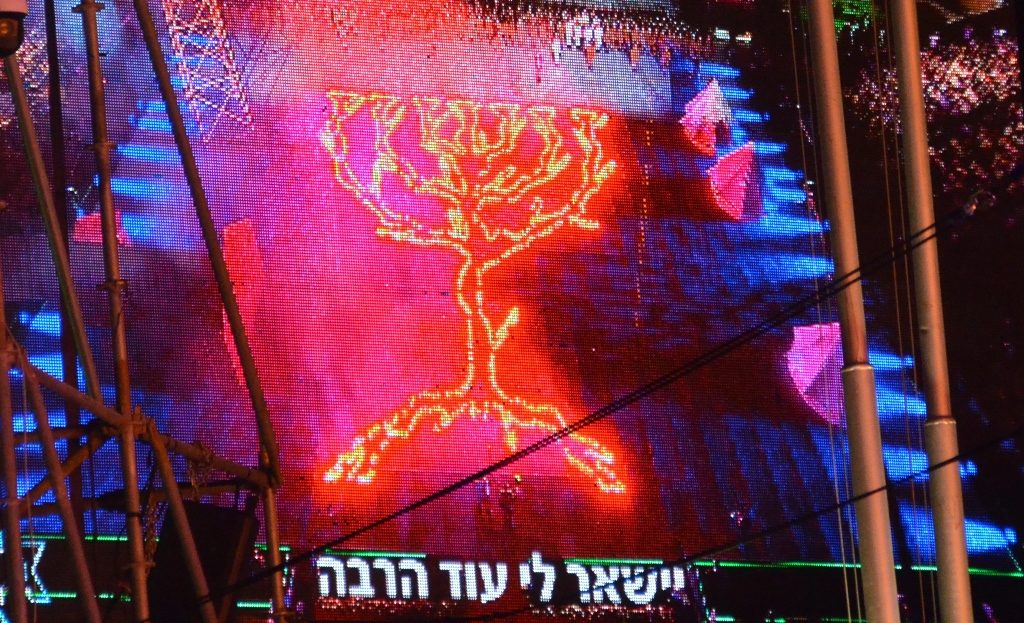 Overhead cameras captured the image of the flames. The menorah, the seven-branched candelabra, was shown on huge screens near some of the choirs above the stage. 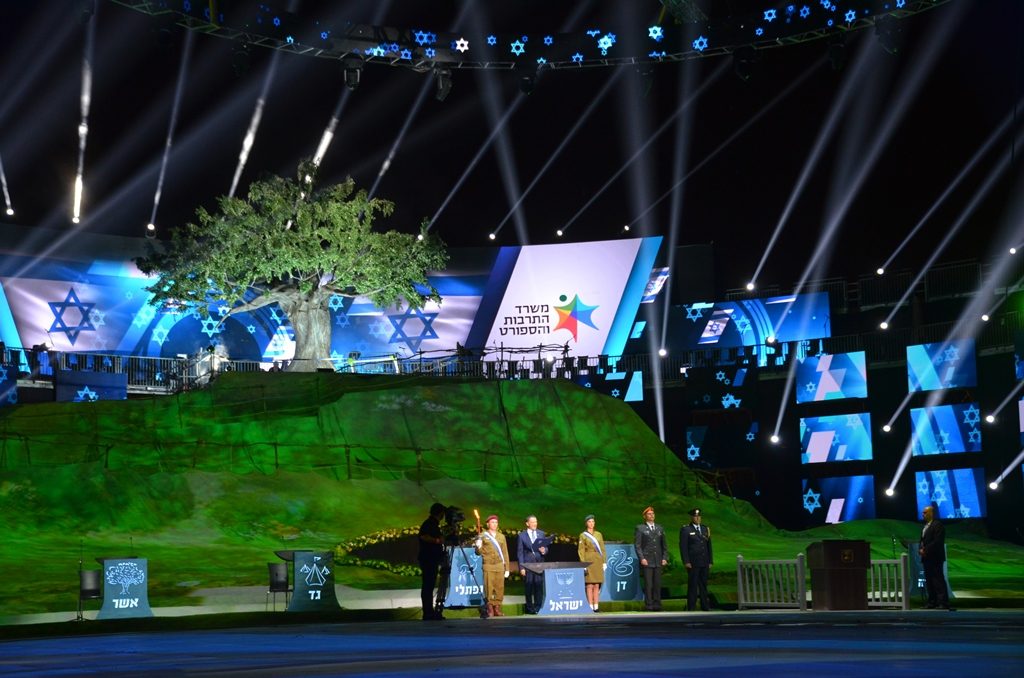 The ambitious entertainment was followed by the lighting of 12 torches by honored Israelis, one for each tribe of Israel.  The event is led by the Speaker of Knesset, Yuli Edelstein, who delivered the opening speech and lit the first torch. 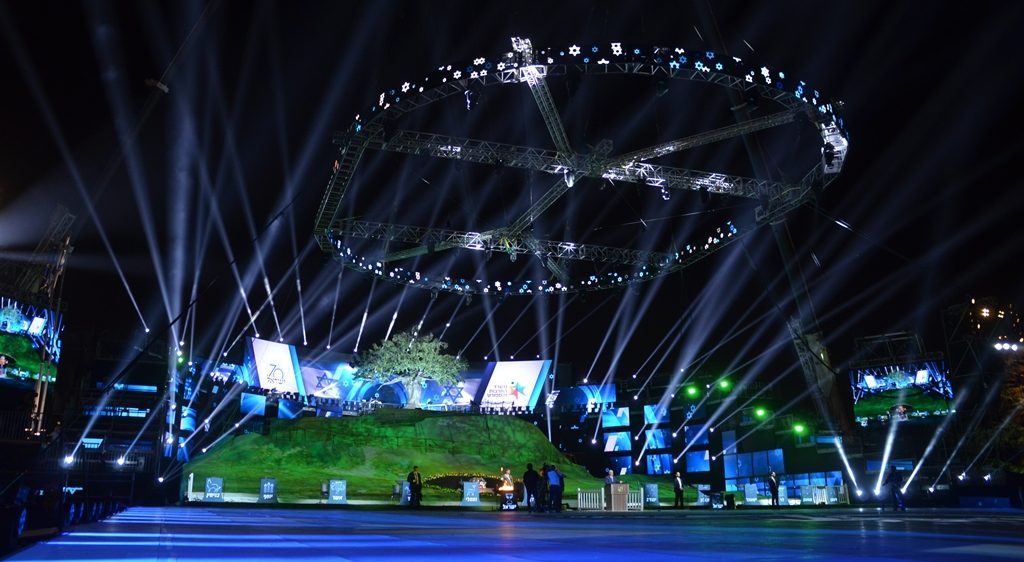 The event went later than usual, and it would take too long to include more details.  Here is view of stage to give you an idea of its size. See if you can find the Prime Minister speaking at his podium. 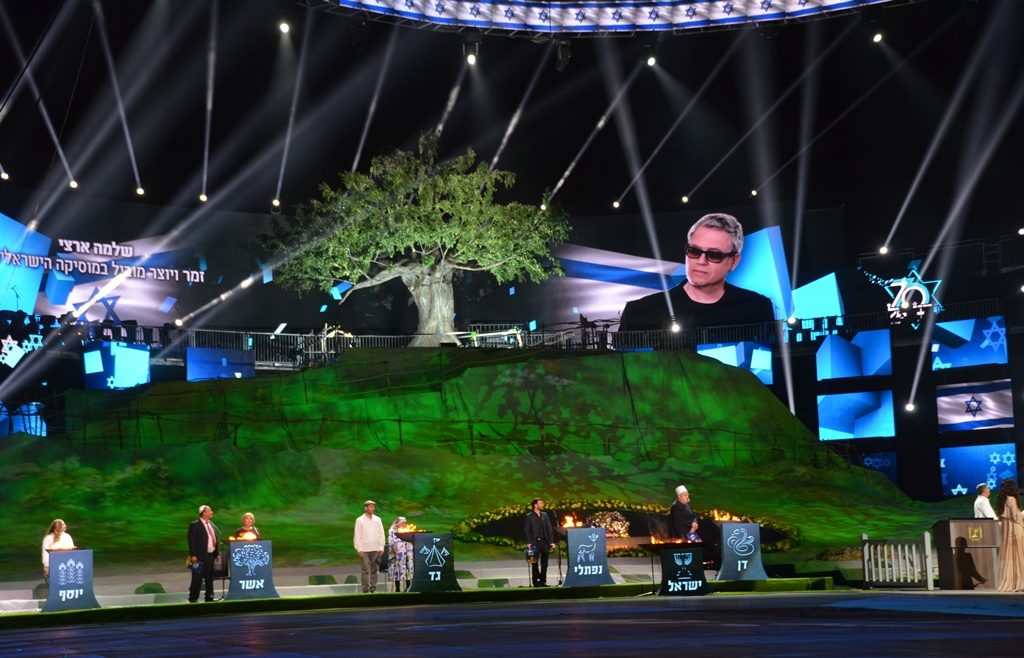 One of the honorees was singer Shlomo Artzi, and each honoree had their turn to be featured in short video. 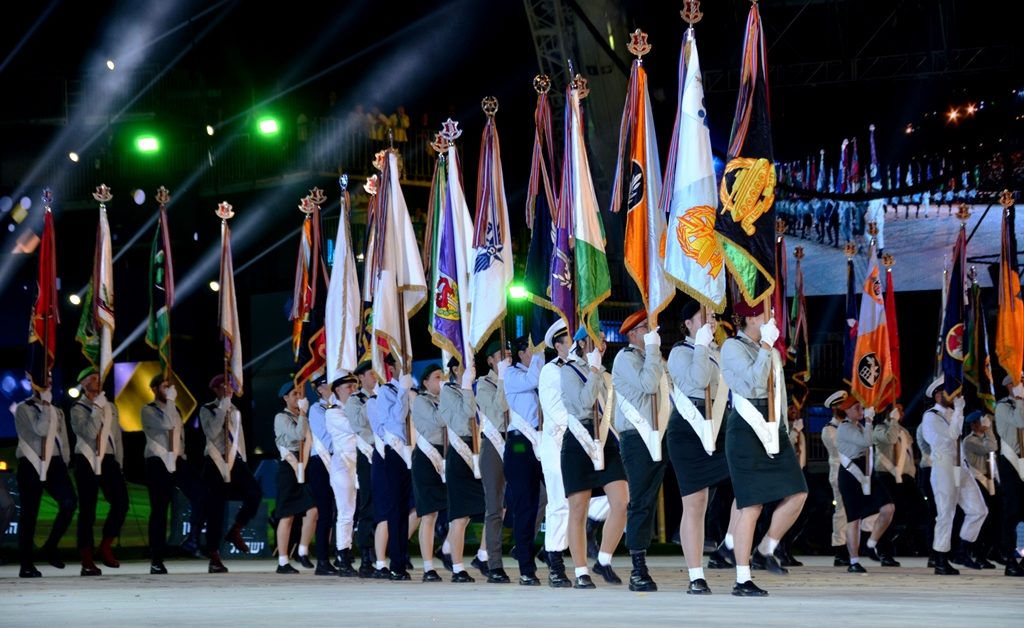 The show ended with traditional military colors and presentation.

New this year, 300 drones provided a light display, and was video worthy, as you can see.

If you need even more photos from Yom Haatzmaut, check HERE

But that was just at night. Walking home from Har Herzl, the smell of smoke from the grills was already strong in Jerusalem’s parks. 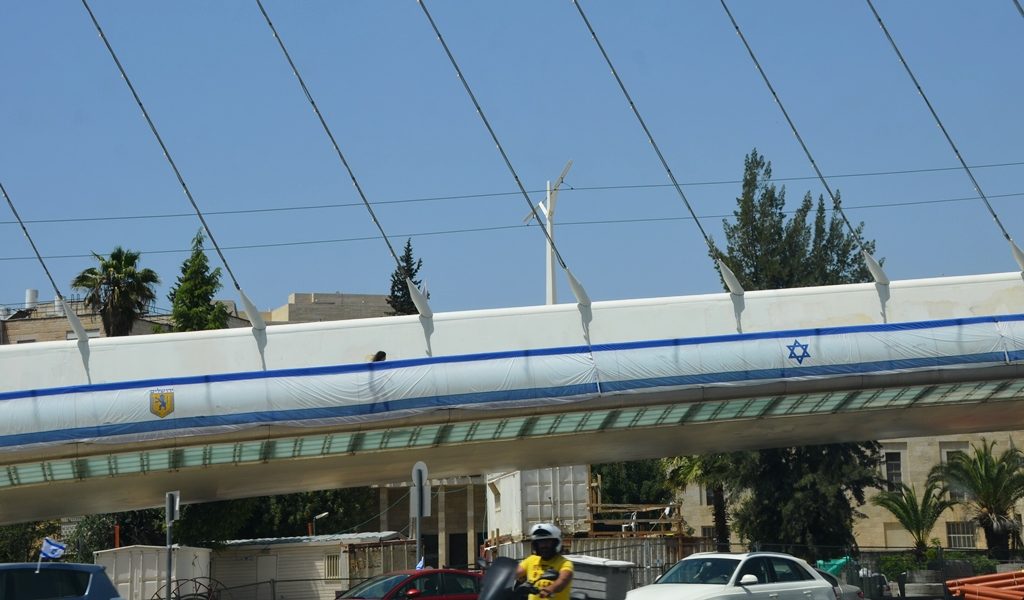 There was still an entire day with special prayers in some synagogues, more mangals, BBQs, parties, celebrations, music and of course flags of all sizes. 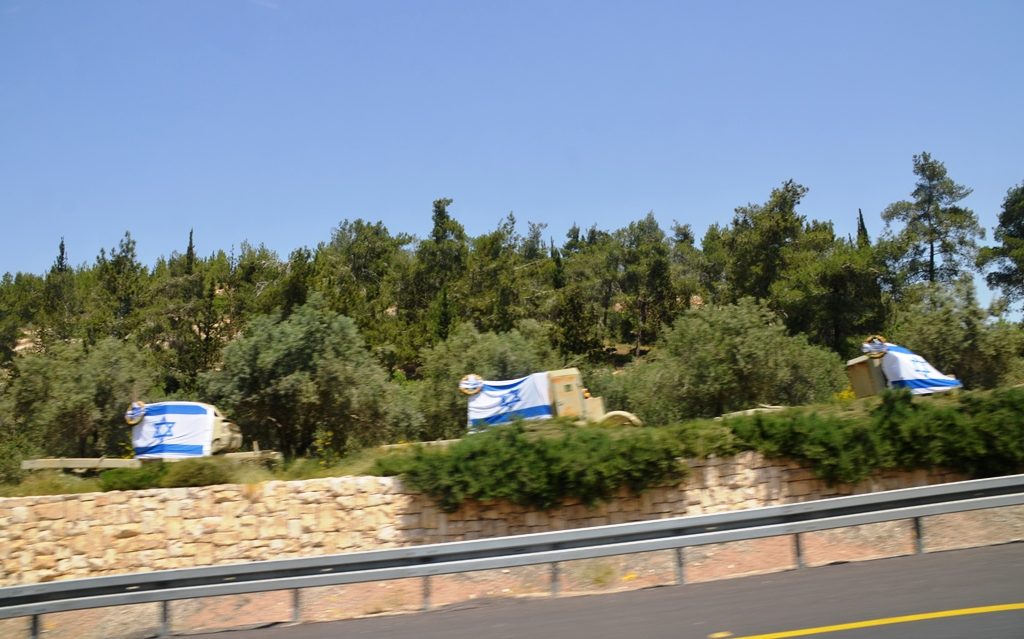 These old armored cars along Route #1 which broke through the siege in 1948 were decorated with Israeli flags for Israel at 70. 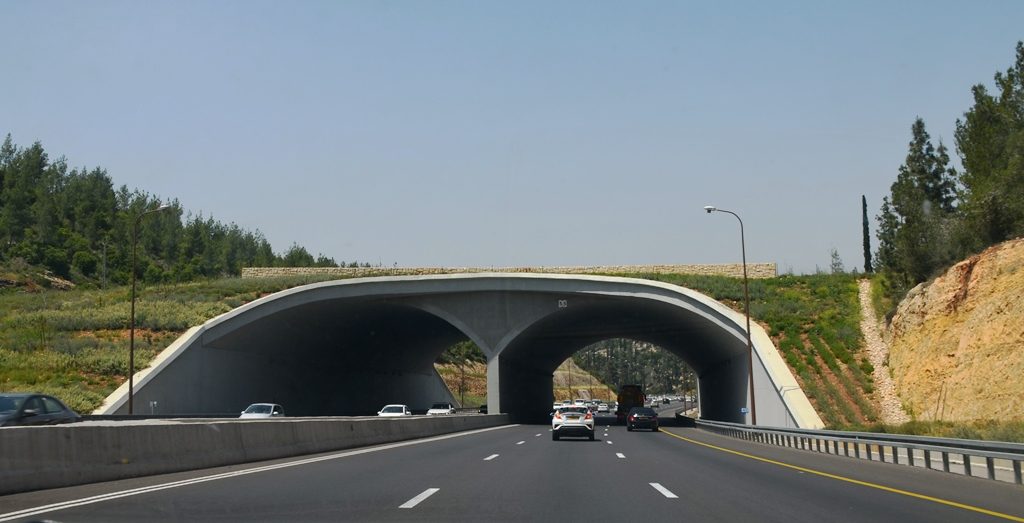 Route #1 is nothing like the old two-lane “highway” on which vehicles slowly chugged their winding way up to Jerusalem. Yes, it took years to finish. But today there is a real six-lane highway, with a nature overpass designed for animal safety and conservation. 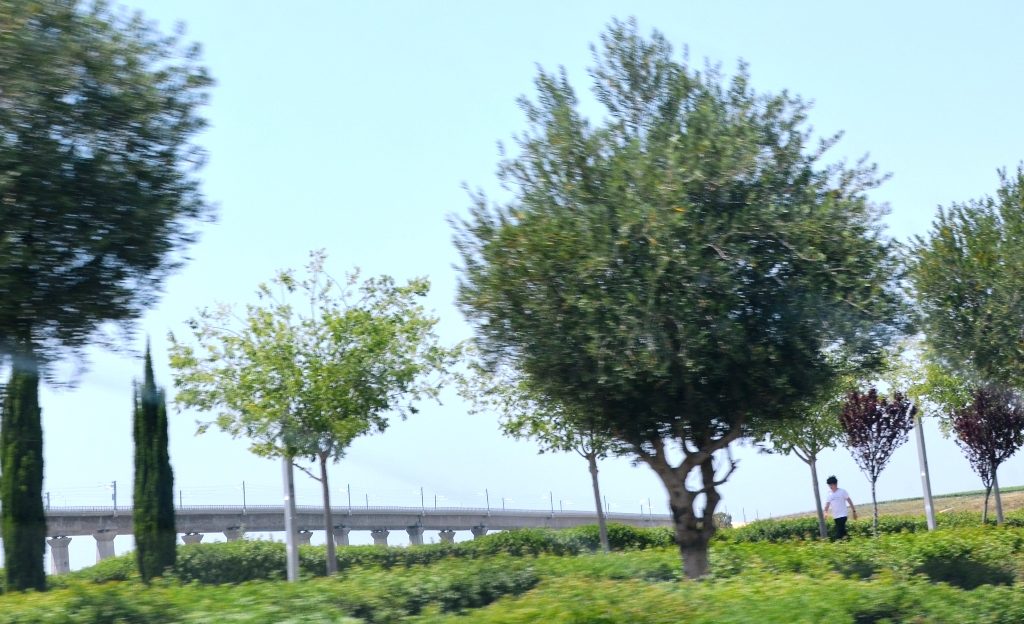 Ancient Roman aqueducts in the distance? No. The overpass waiting and ready for the Tel Aviv-Jerusalem fast train to run. So much has been accomplished in 70 years, in spite of what seems as never-ending conflict.

The annual International Bible Competition held at the Jerusalem Theater is a must for Yom Haatzmaut morning TV viewing for many Israelis.

The holiday ends with the Israel Prize Awards in the evening, another TV viewing opportunity.

Since this post is called the best of this Yom Haatzmaut, I cannot end without mentioning some special moments. Twelve Israelis are honored each year for accomplishments in various fields, from physics to music and more.

One of the twelve honorees responds in the name of all twelve honorees after they receive their awards from the Education Minister in presence of the Israeli President, Prime Minister, and other dignitaries.

This year Miriam Peretz was chosen to speak, and she received more than one standing ovation. This mother who had two sons fall in Israeli wars, has become a national icon and an inspiration. 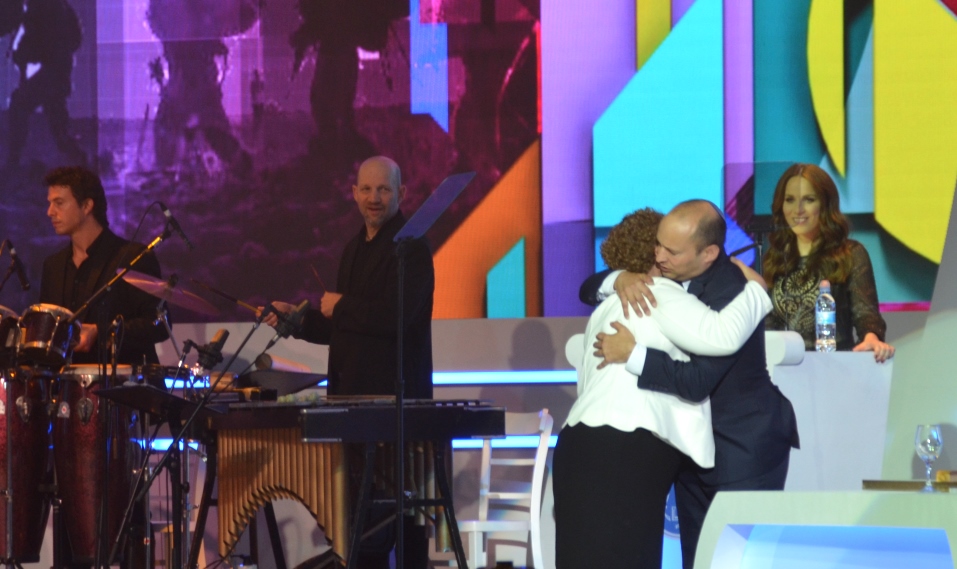 Not only her words, but also her hugs brought tears to most eyes. Ending her talk with the message “we are one nation and we have to work together in good times as well as bad,” she hugged Education Minister Naftali Bennett. Then she proceeded to hug all the awardees, who included Natan Sharansky and writer David Grossman.  Grossman may have different political views, but like Peretz, he also lost a son in combat.

#Israel70, not just a one day celebration, this year it is still going.

6 thoughts on “Best of Independence Day Israel at 70”