Will it rain tomorrow?

How cold will it be today?

In Jerusalem, Israel, the weather is a constant topic of conversation.

Last week was unusual, with pleasant weather, not too hot, not too cold.

A great week to get out and get some sun before the winter rains return.

My colorful week with good weather began with one of the best views of the Jerusalem Old City from the Tayelet.

Sigd this year was downsized to a few “capsules” with three Kessim at the dais to lead the traditional prayer service which was broadcast live.

Seated a few meters away was “capsule 3” Kessim in a group, socially distanced sitting under their colorful umbrellas. The annual observance in other years attracted thousands for prayers and after the fast a major party, but due to corona restrictions, it was extremely limited this year.

This woman was keeping her distance as she faced Jerusalem’s Old City, but I noticed her cell phone.

This man sat on a wall at the Tayelet, but without the view.

Was he watching the prayers broadcast on his phone?

Security was in place. However, sadly due to COVID-19 few people came.

These new buildings sprung up near the Tayelet and they are part of the change in the neighborhood.

Ahdeya Ahmad Al-Sayed, President of the Bahraini Journalists Association, said she will never forget the photos from Jerusalem of Israel and Bahrain.

The red and white flags of Bahrain were at Beit Hanasi, the Israeli President’s residence, as the Foreign Minister of the Kingdom of Bahrain, His Excellency Dr. Abdullatif bin Rashid Alzayani, signed the official guest book before meeting with President Rivlin.

I got a photo of the Bahrain and United States flags on the hotel with the Israeli flags as official state meetings were held inside.

The real streets were not involved with meetings unless the drivers were stuck in traffic, which was an all too common occurrence before the coronavirus pandemic.

Now is the time for fall colors – rare and appreciated in Jerusalem.

The garden outside the Knesset was more colorful than usual this week.

The flower bed on Herzog Street had reached peak color.

The floral butterfly near Gan Sacher, Sacher Park was past prime time.

It’s time to pick those olives, otherwise, they end up on the ground under the trees, and turn into squashed overripe purple globs. Plenty of photos of those streets, but not such a pretty sight.

Blue skies and white clouds were great for walking this past week.

This path, empty in the past, became so popular I went off to look in different directions.

Groups of children were in parks taking advantage of the sun.

Jerusalem parks were green and filled with student groups.

Jerusalem green spaces were alive with the sounds of children’s voices.

In Nahlaot, where space is dear, green vines grew on and over the streets,

and flower beds add color along the walls in the old narrow lanes.

Coronavirus has moved synagogue prayers outside to the Jerusalem streets,

and study centers out of the buildings into covered open shelters.

Communal street lending libraries were open when other public ones were closed for browsing due to virus limiting restrictions.

Gan Sacher was green and full of life, as couples strolled in the midday sun, taking advantage of days without rain.

It was a colorful week, with people taking the time to get away from their screens and go outside, from the Tayelet to the Jerusalem Rose Garden where before corona I led nature photo walks.

But I will save those many photos, and share one of my favorite sights this past week before I close.

A woman taking her youngsters out for a walk using one of those rolling pens. The old ones from kibbutz days were made of wood, but this one was made from light metal. They were such a cute sight on their outing.

The Jerusalem new winter signs are up, for “a warm winter and health – because in Jerusalem winter is winter.”

So when the weather is good, it’s good to get out and see the autumn colors.

Take care everyone and stay well.

In Jerusalem, Israel, it is hard to predict what will happen next during the winter.

One day it’s rainy and grey. Then the next day, skies clear and the sun warms up the streets.

Inside is another story, even with heat my feet are cold wearing boots or furry slippers.

But if you get out and walk on the Jerusalem streets, oh the colors you can see. 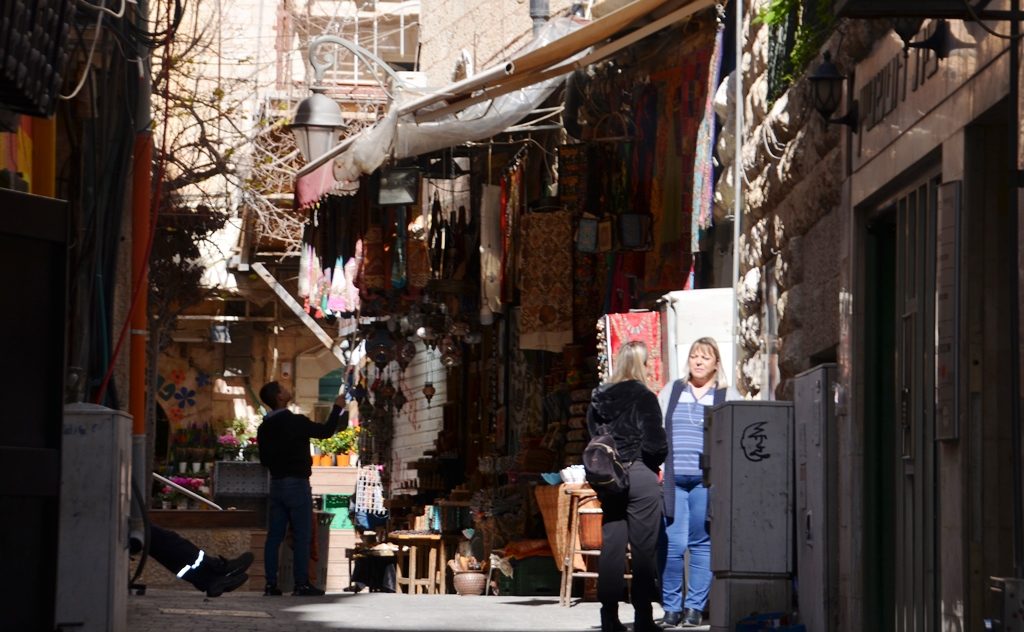 In the morning a shopkeeper gets ready for the day in his little alleyway. 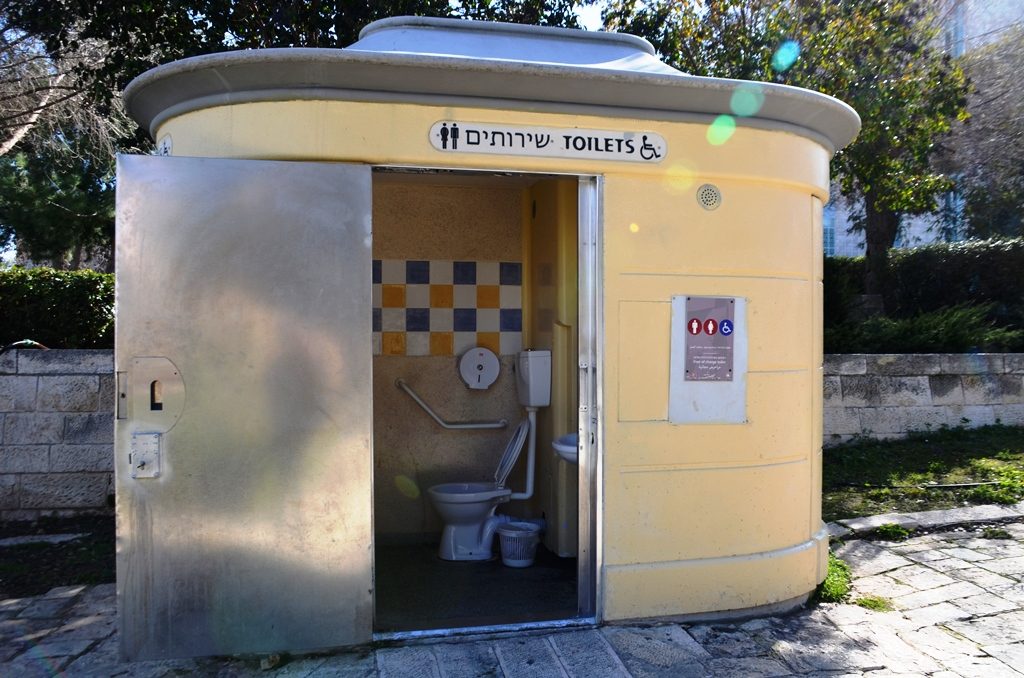 You can see the public toilet in the park is clean. 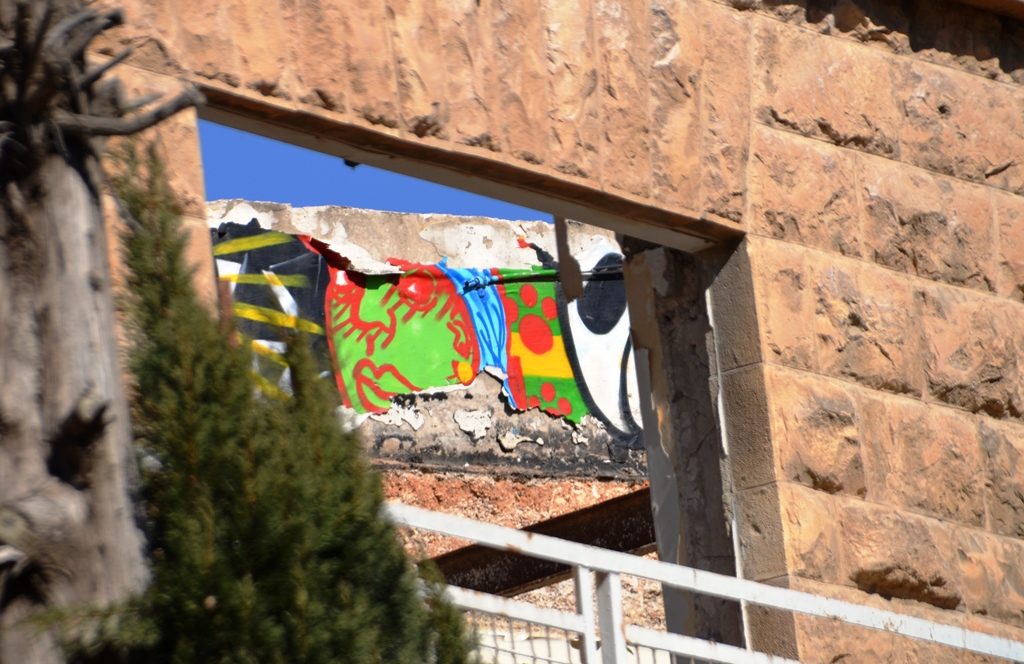 You can see graffiti and a clear blue sky in an old building under renovation. 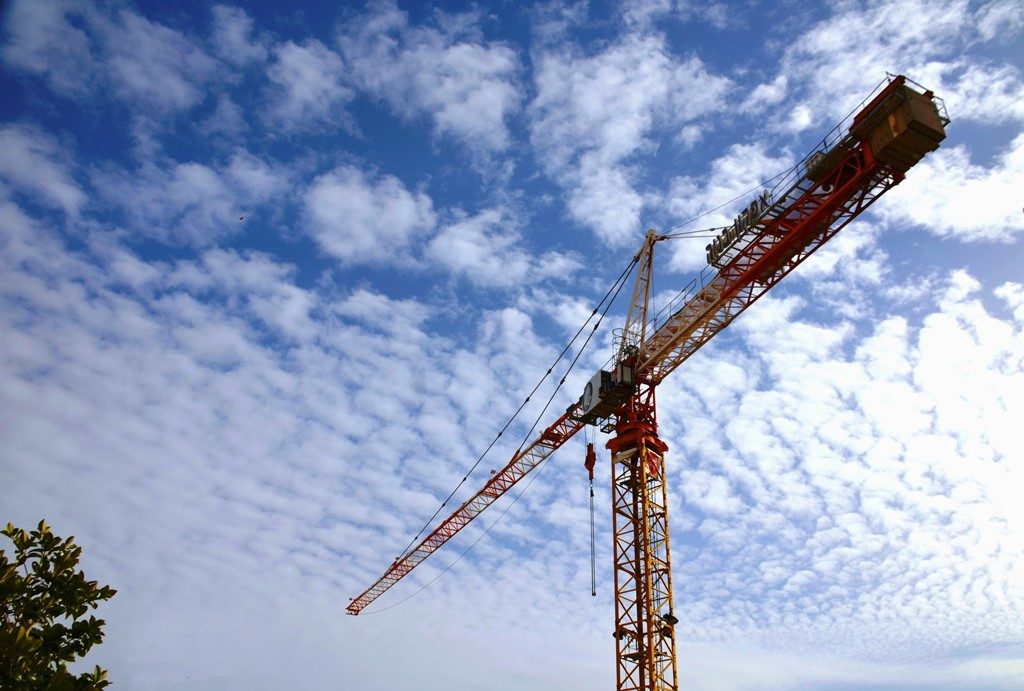 You can see the blue sky through white clouds, and building cranes reaching toward them. 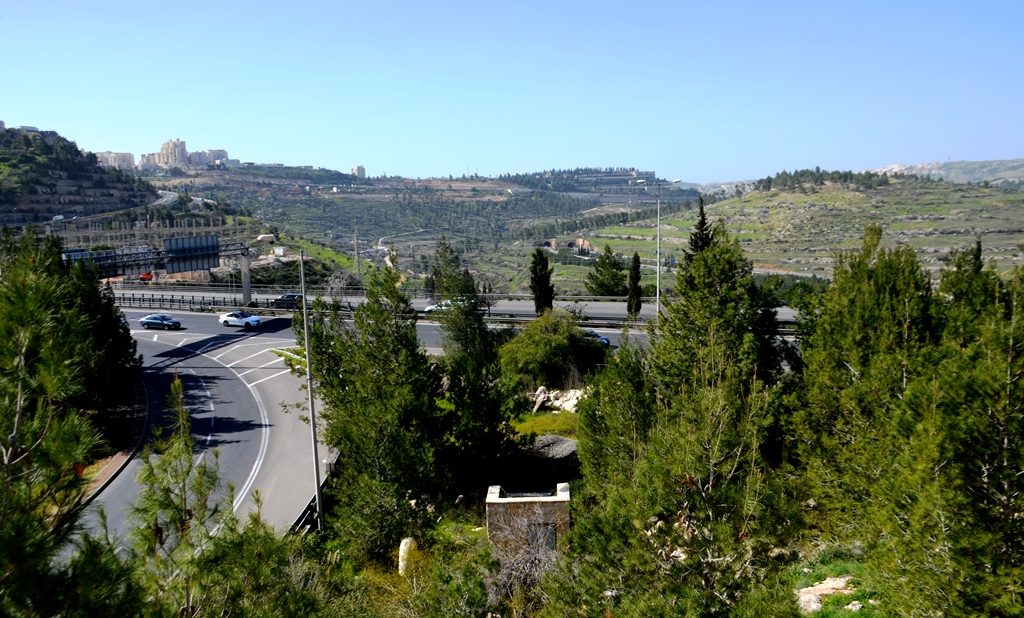 You can see the construction for new light rail stations, this view from Har Hotzvim. 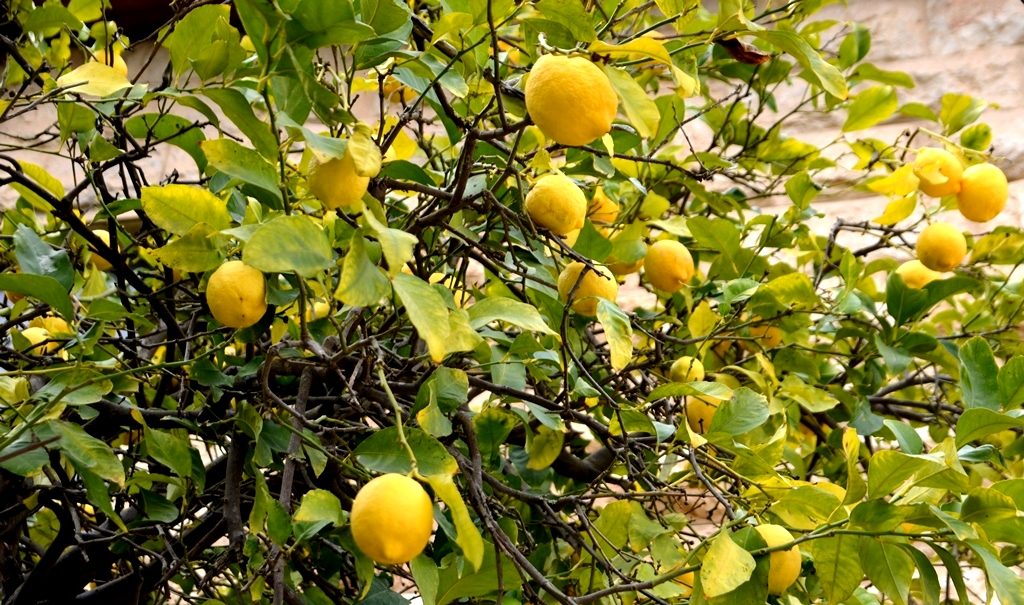 It is winter, look up and see the lemons are yellow on the tree. 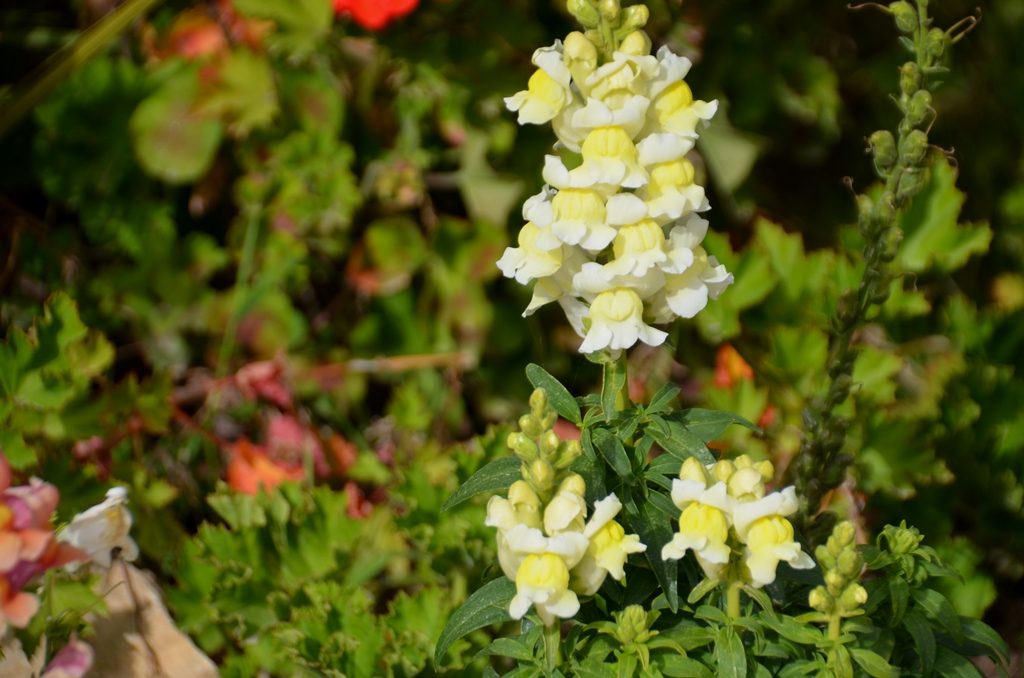 Look down you can see yellow flowers on the ground. 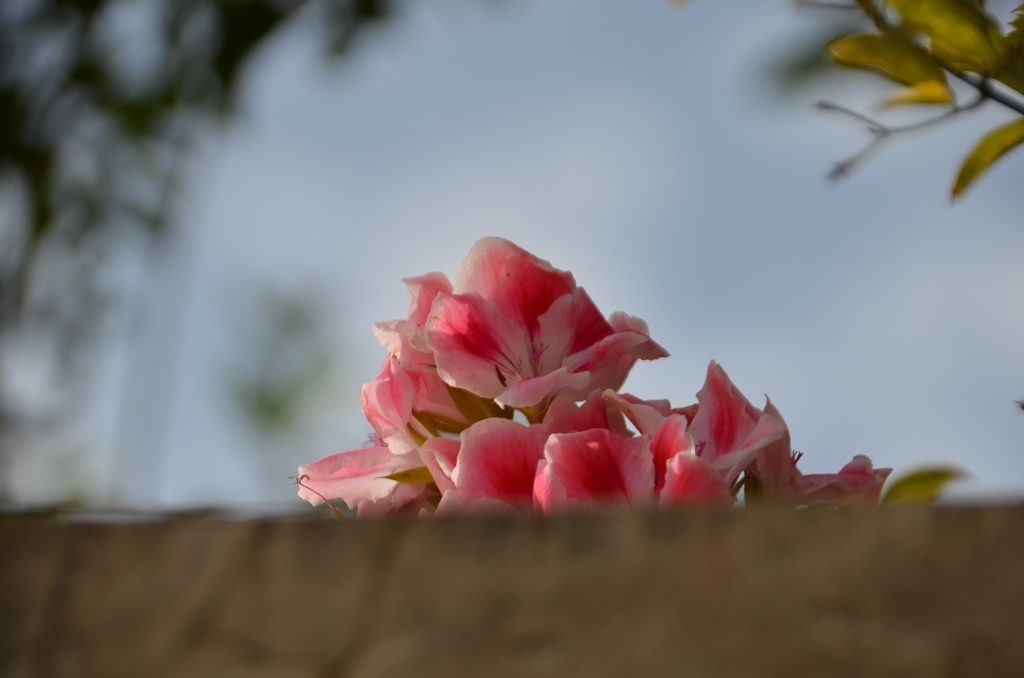 Here pink flowers are peaking out on top of a wall. 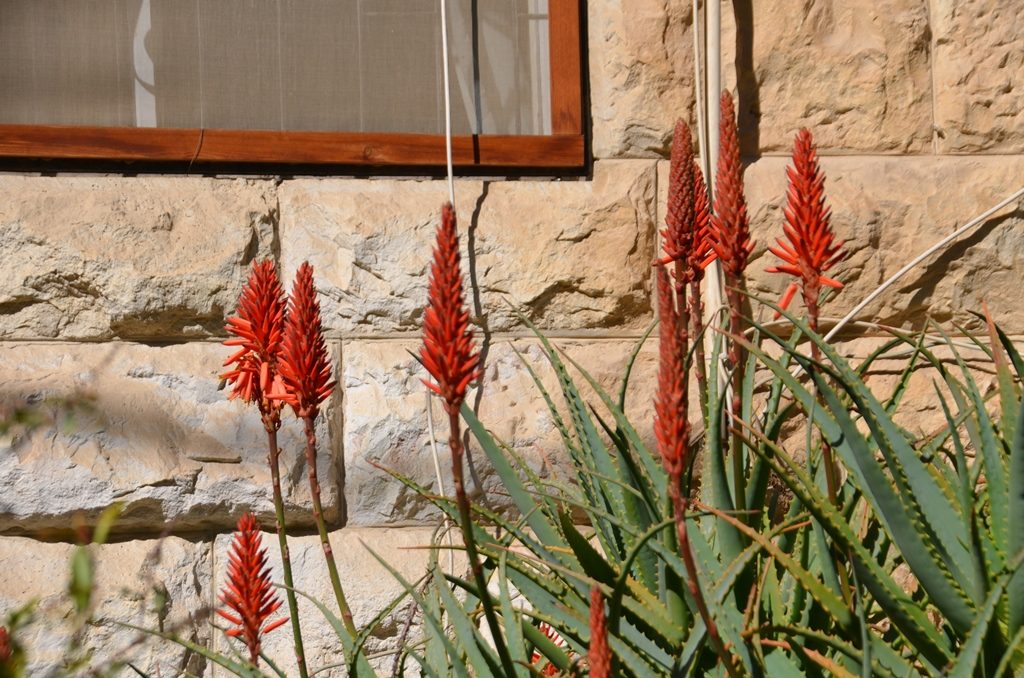 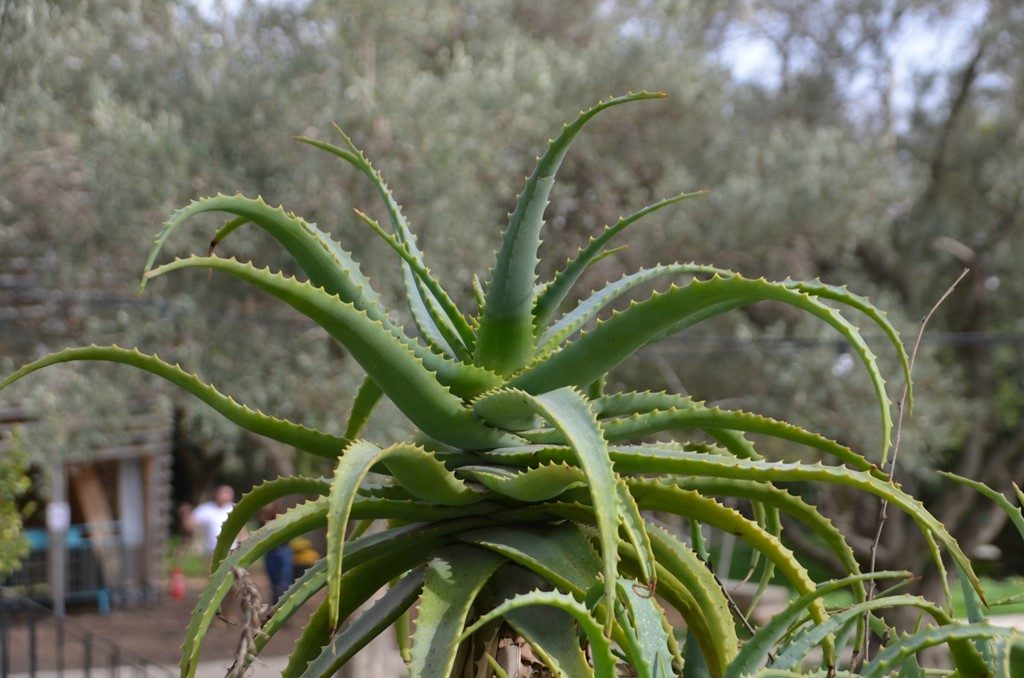 In Hansen Garden the aloe plants are huge and green. 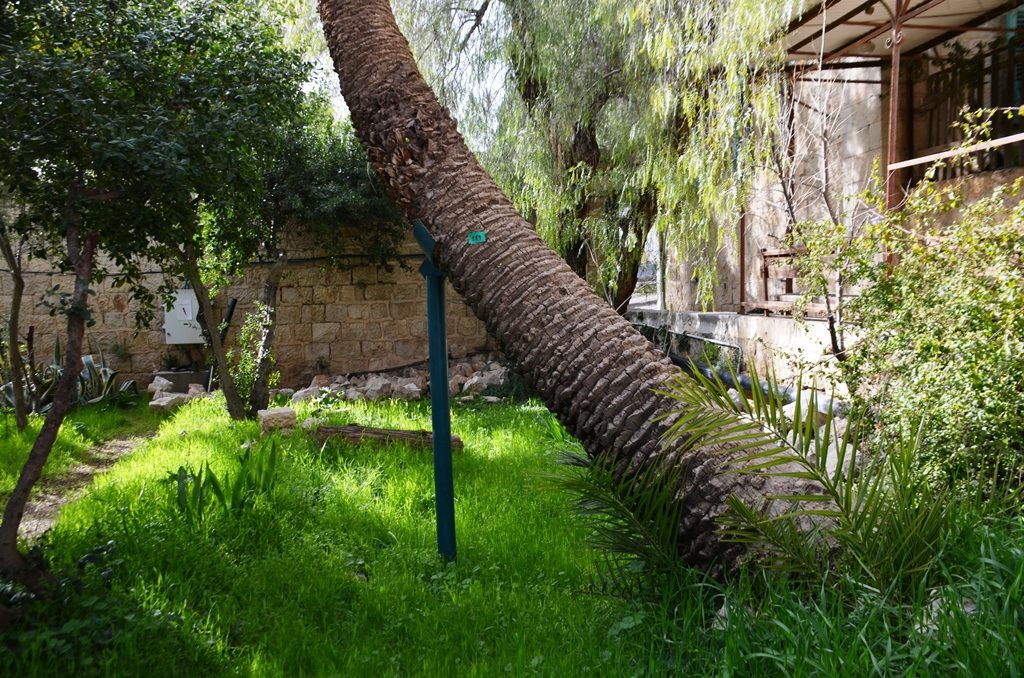 This old brown palm tree needs to be propped up, but the ground is covered in green. 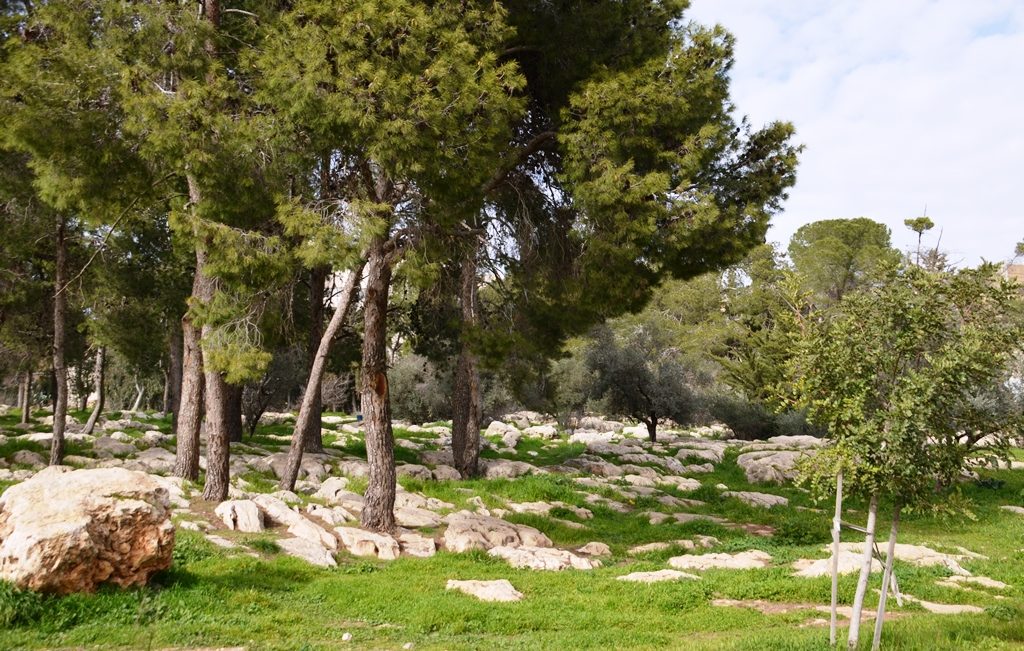 In the park across the road, after winter rains it is also green.

And the blossoms can be seen on trees all around. 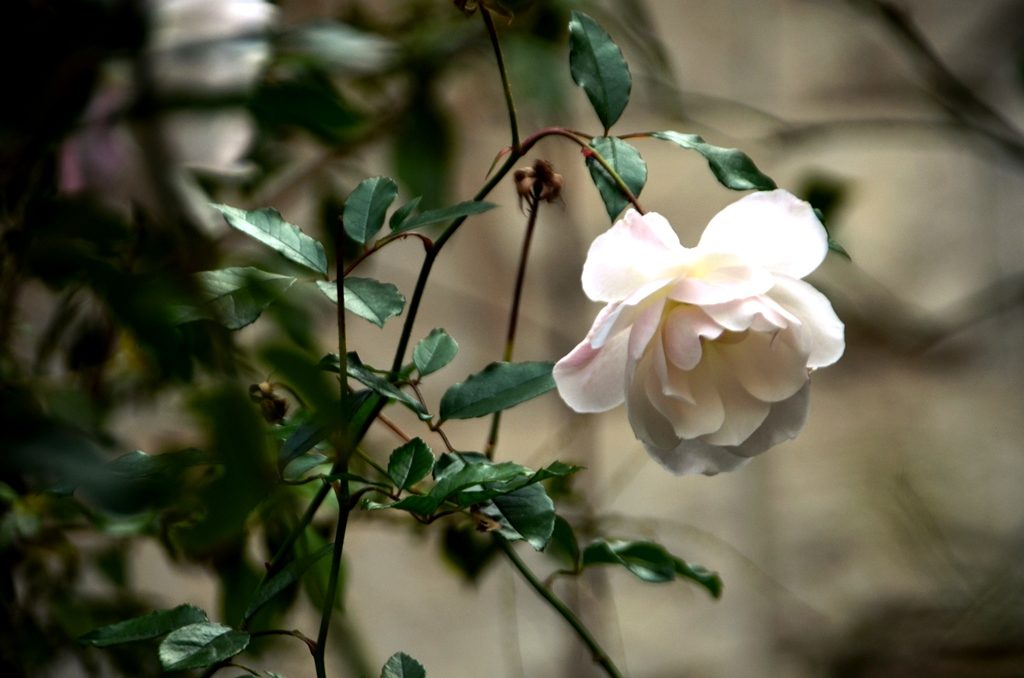 Winter and delicate roses are in bloom. 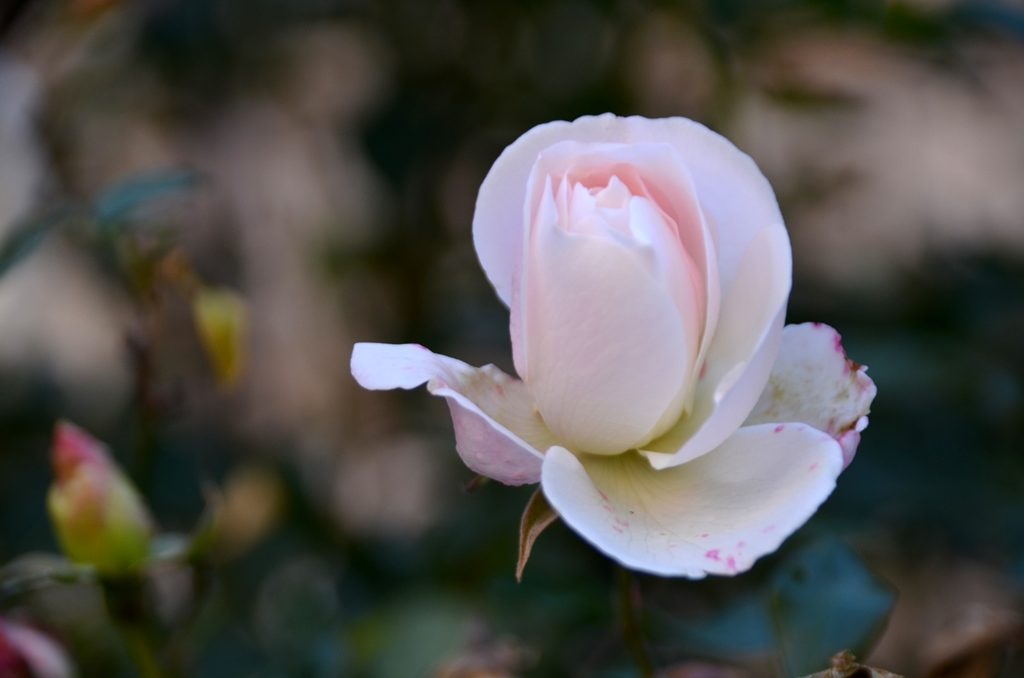 White or pale pink, I love the ones that bloom in winter. 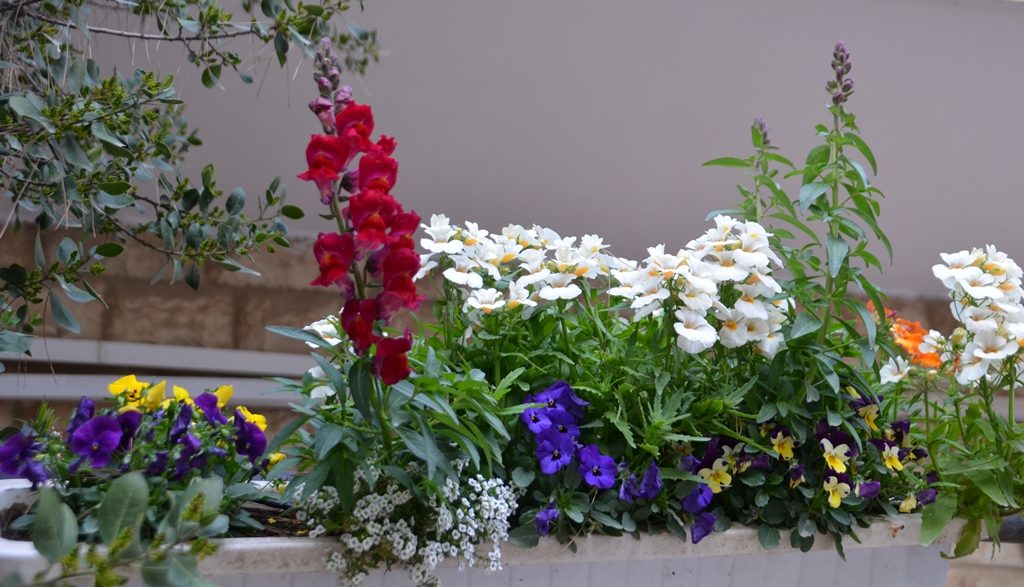 As much of the northern hemisphere is frigid and covered with snow, here in Jerusalem flowers flourish outdoors in winter. 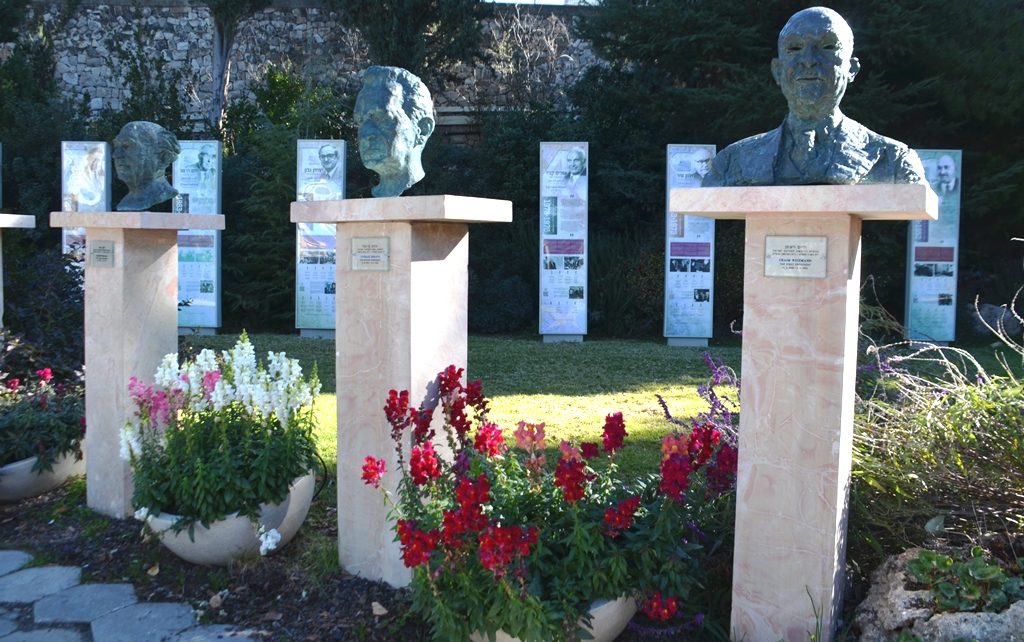 These flower pots at Beit Hanasi, the Israeli President’s Residence, are hard to see from the street. 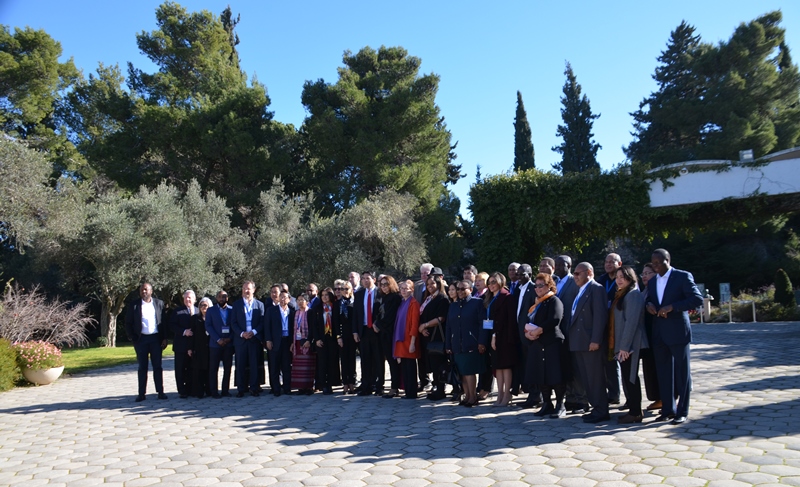 But once inside, even the 28 visiting UN Ambassadors stopped to have a look and pose for a photo. 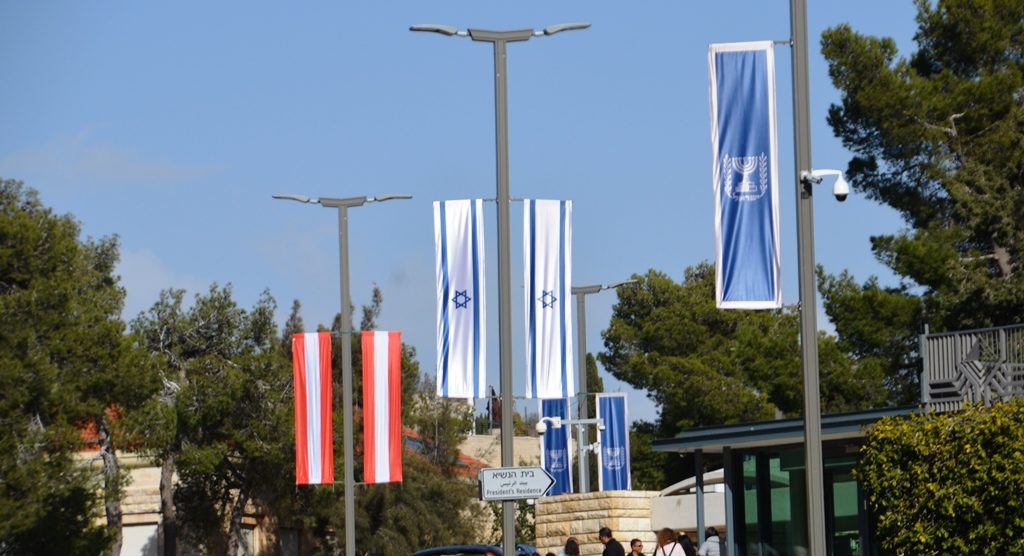 Oh the colors of flags you can see in Jerusalem!

The President of Austria received a red carpet welcome along with his red and white flags. 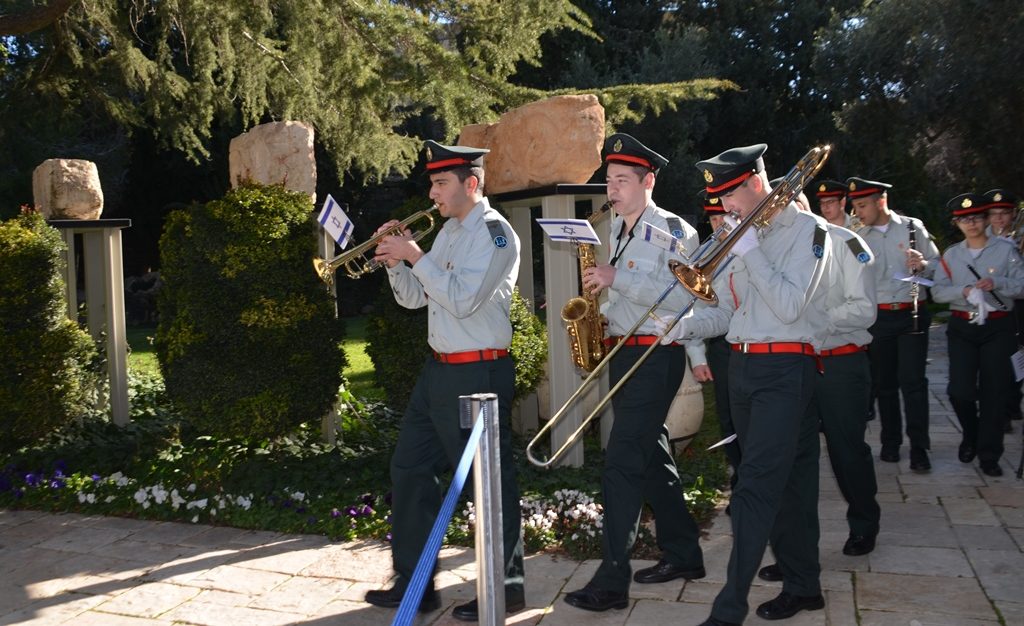 For official diplomatic visits you can see and hear the police band, 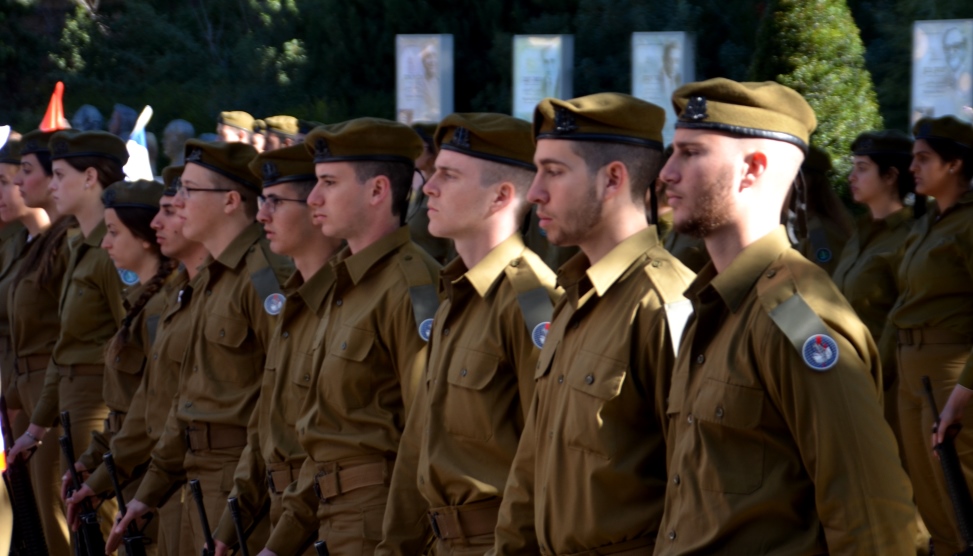 and see the colors of an IDF honor guard. 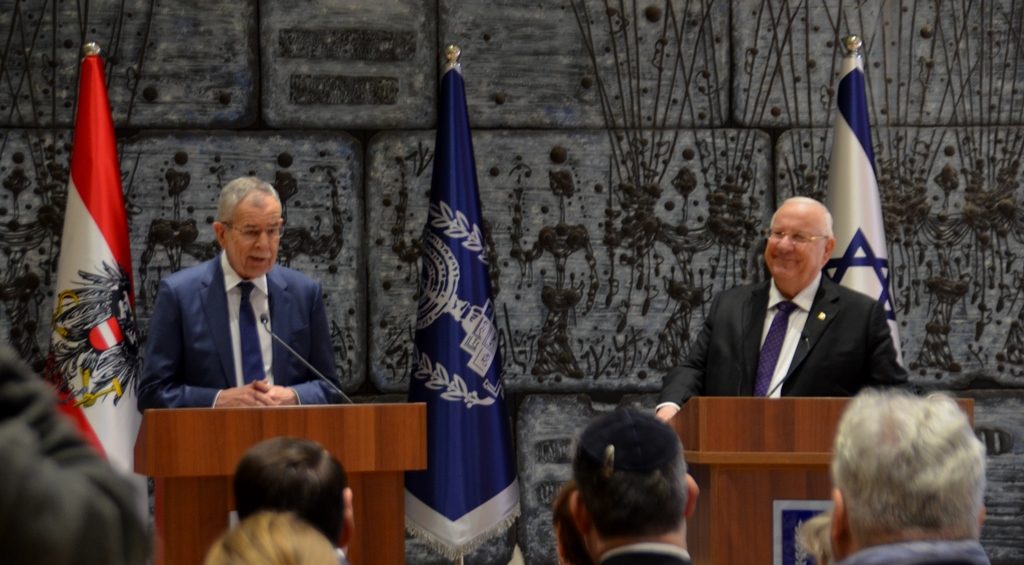 But you could see a smile on President Rivlin’s face when he mentioned schnitzel. 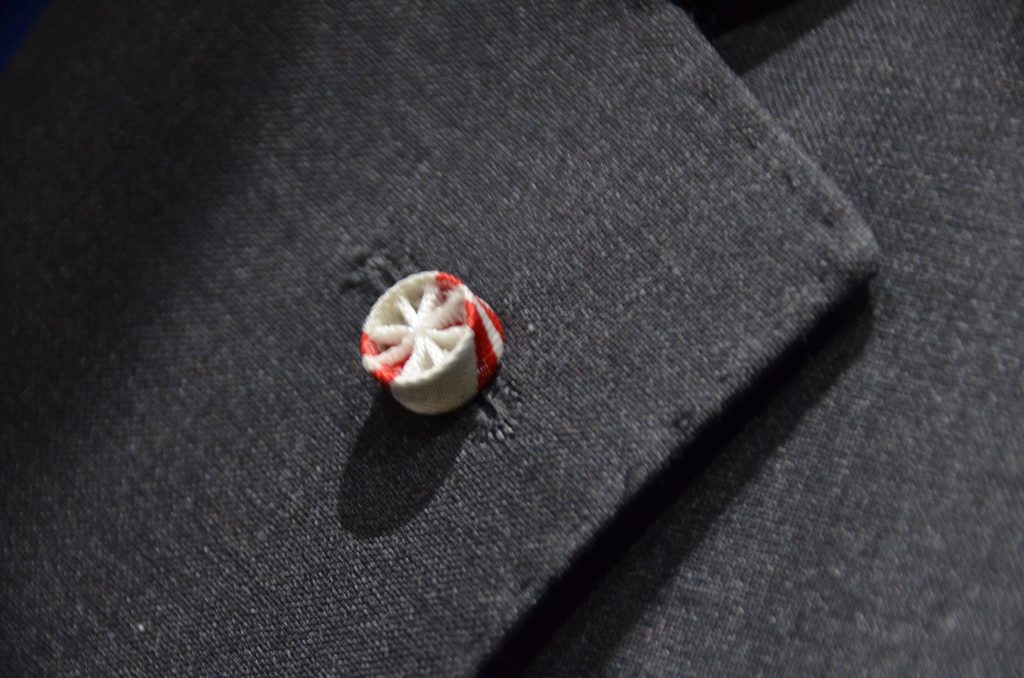 There were many blue and white flag lapel pins, for Israel and for EU.

If you looked hard you could see this tiny, red and white lapel pin.

It made me think of candy canes. 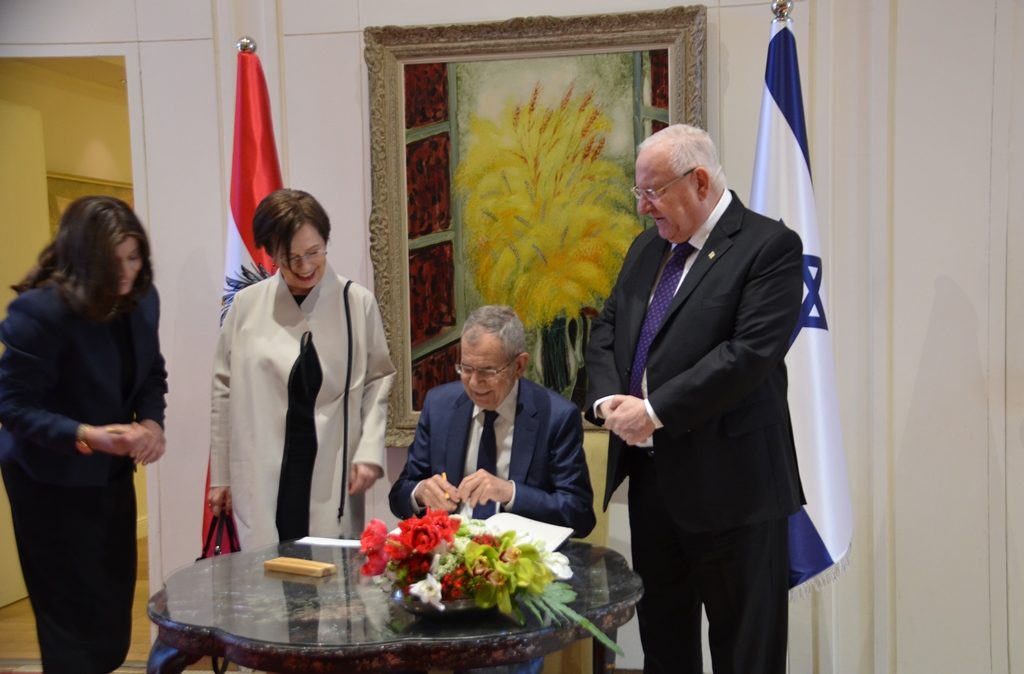 The presidents met so long not many stayed around to see the pen did not work when signing the guest book – Oops, quick get a new pen. 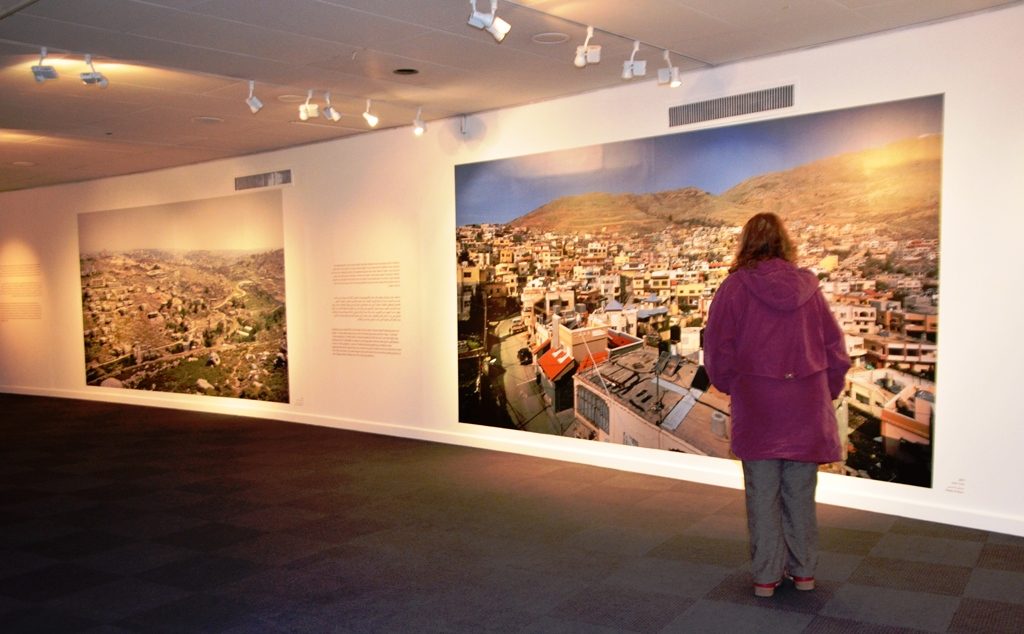 Across the street at the Islamic Museum there is a new exhibit.

These large photos are printed on special wallpaper like panels. Taken with special camera equipment, you can see fine details. 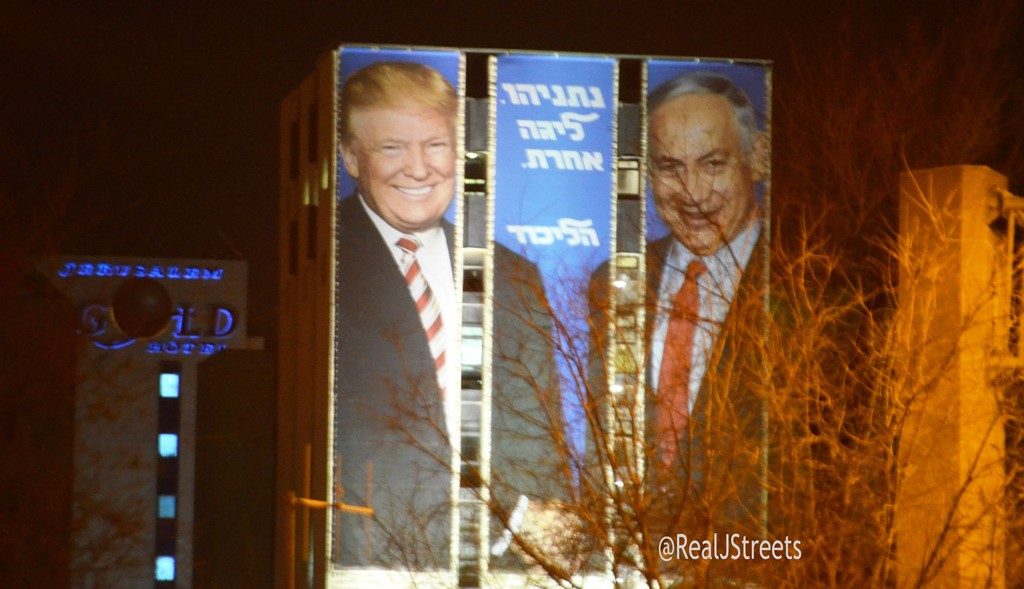 However, at the entrance to Jerusalem you can see even larger photos.

Winners and losers and predictions flow from pundits over the air waves. 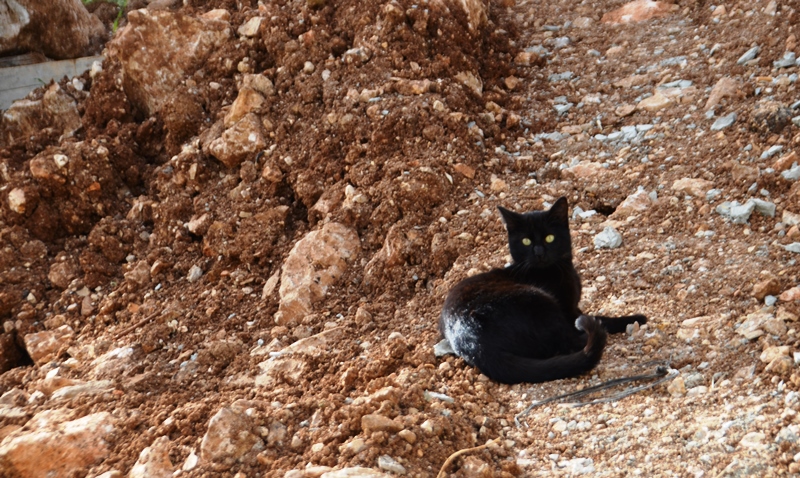 But no matter who wins, when the weather clears, and one gets out to walk on the Jerusalem streets, chances are you can see a black cat staring back.