At the end of December, with each calendar year, many ‘best’ and ‘worst’ lists are published.

After spending considerable time thinking about it, in the end, I decided to let 2018 just slip away. 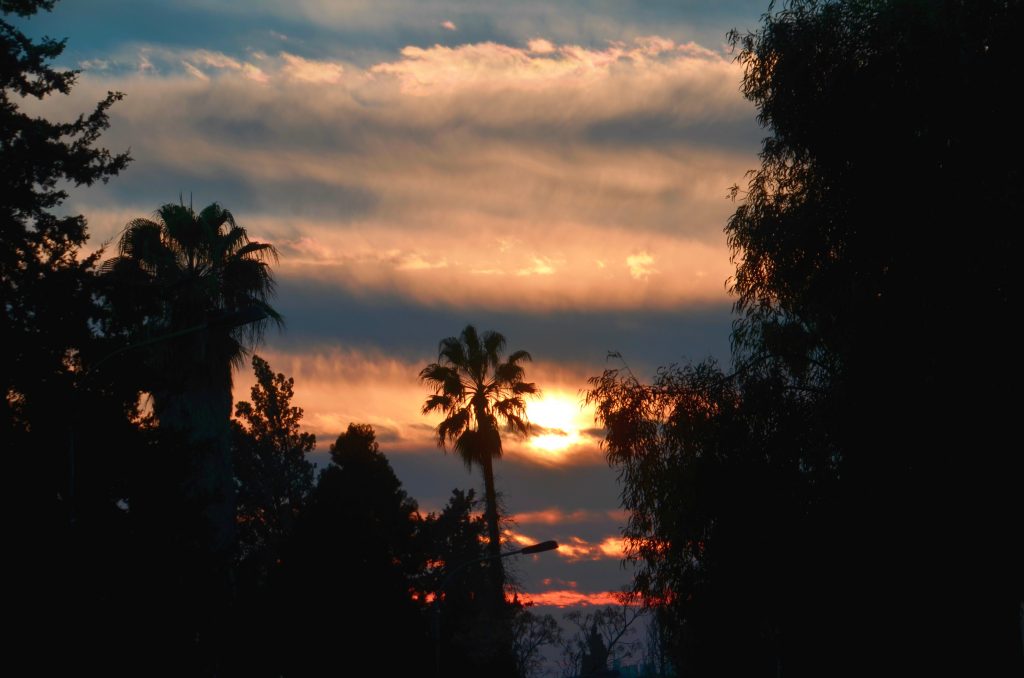 Walking home, I could tell it was going to be dramatic end for 2018, and was not disappointed.

The red horizon  popped with color on numerous photos I saw posted on Facebook. 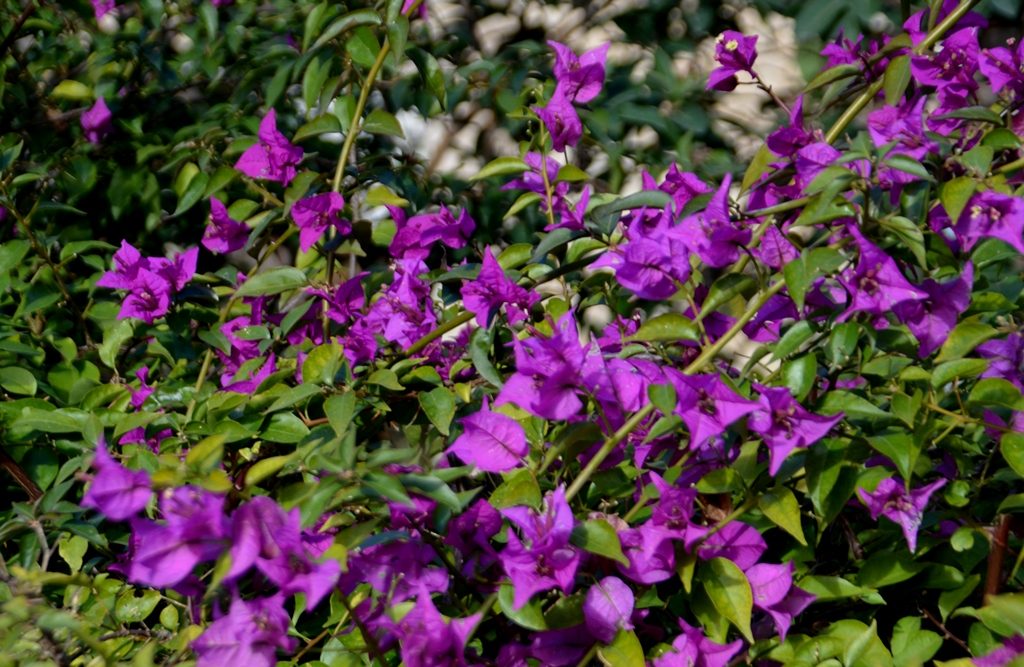 January not only has red sunsets popping with color, but purple flowers lining so many streets. 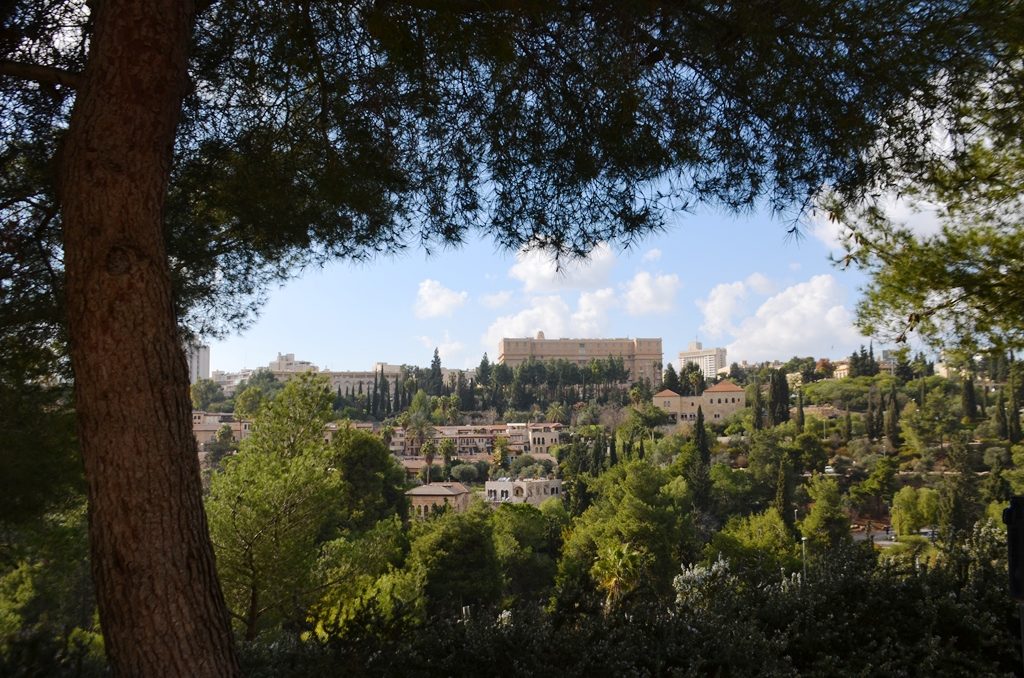 January skies can be blue one minute, 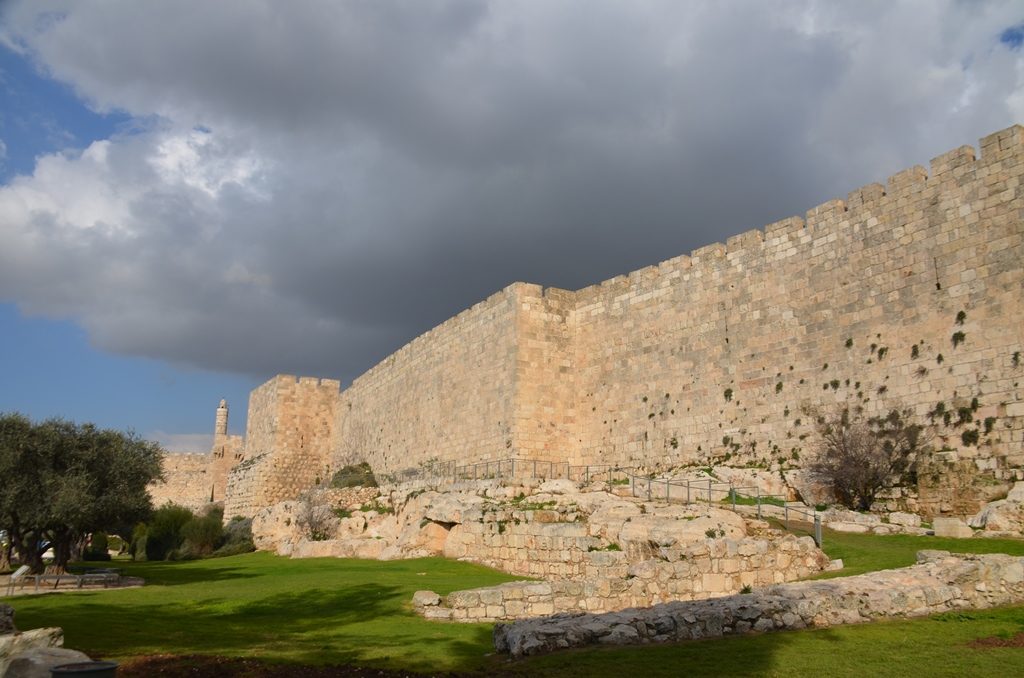 but then turn around a few minutes later to become grey and threatening. 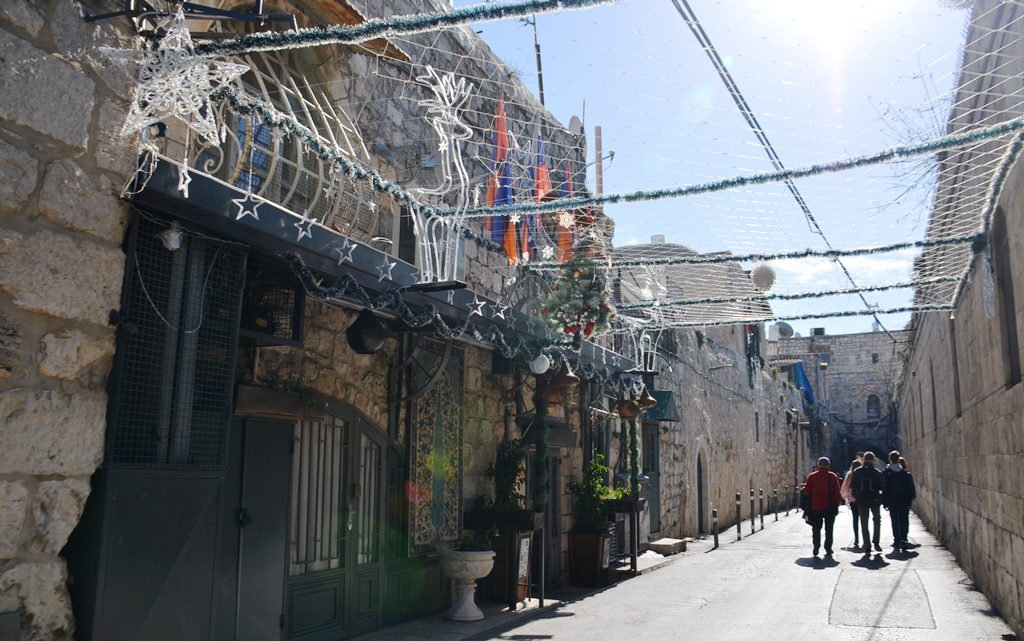 With the Christian Orthodox Christmas still to be celebrated in January, holiday decorations still line the streets inside the Old City; these are near Jaffa Gate. 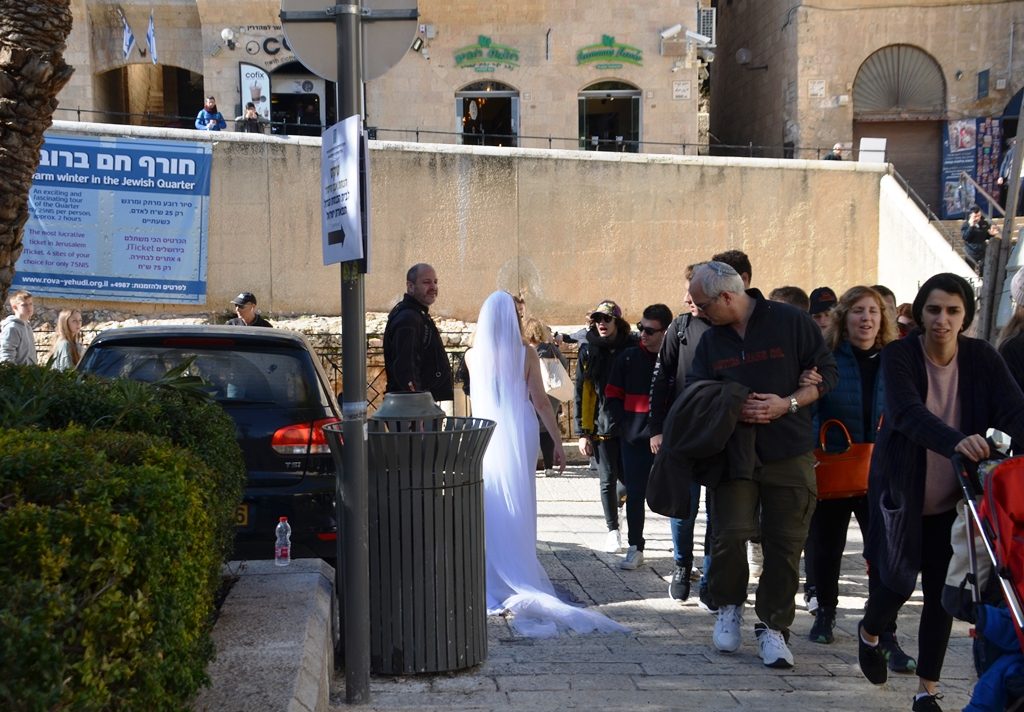 This young woman dressed in a white bridal gown attracted a second glance. 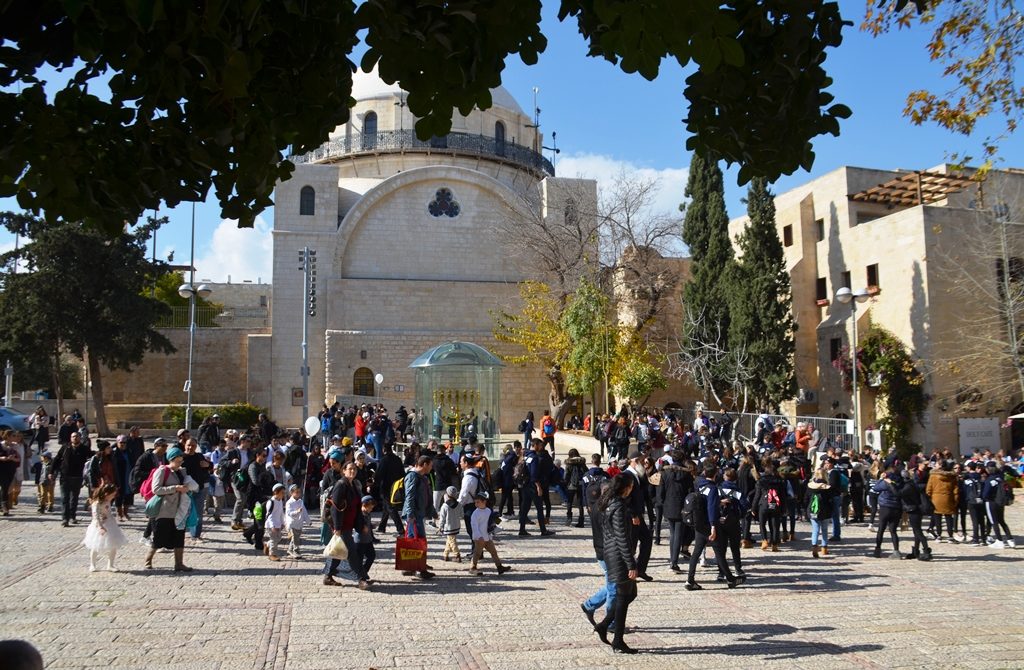 A record numbers of tourists arrived in Israel in 2018. The plaza in front of the Hurva Synagogue was full with hundreds of tours, large and small. 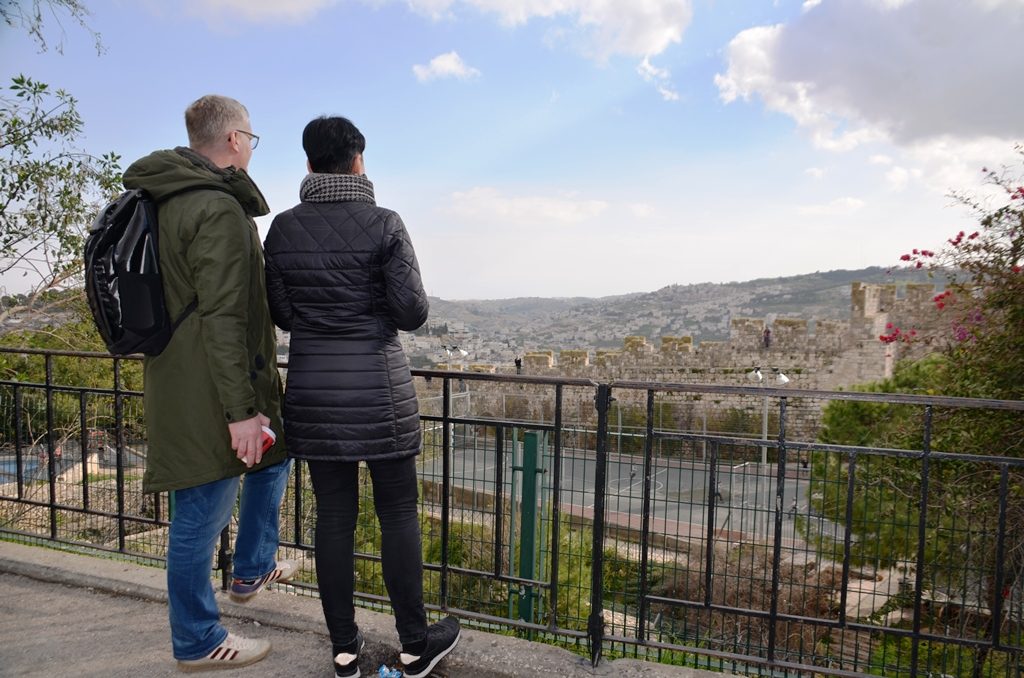 I met this couple from Germany who stopped to look out from the Old City. 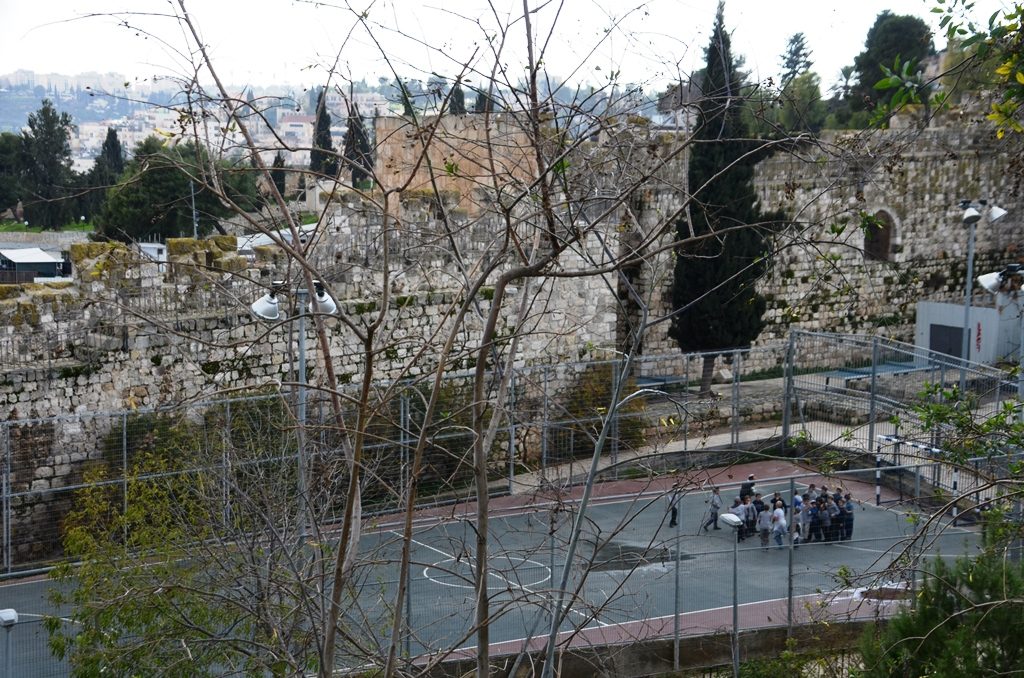 The sounds of these school boys at play below got our attention. 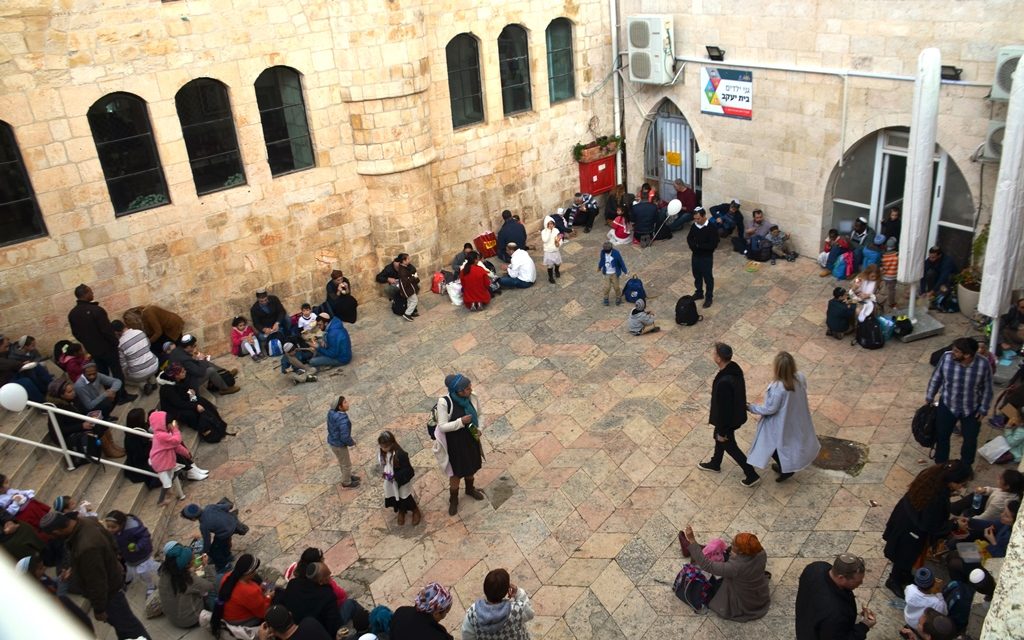 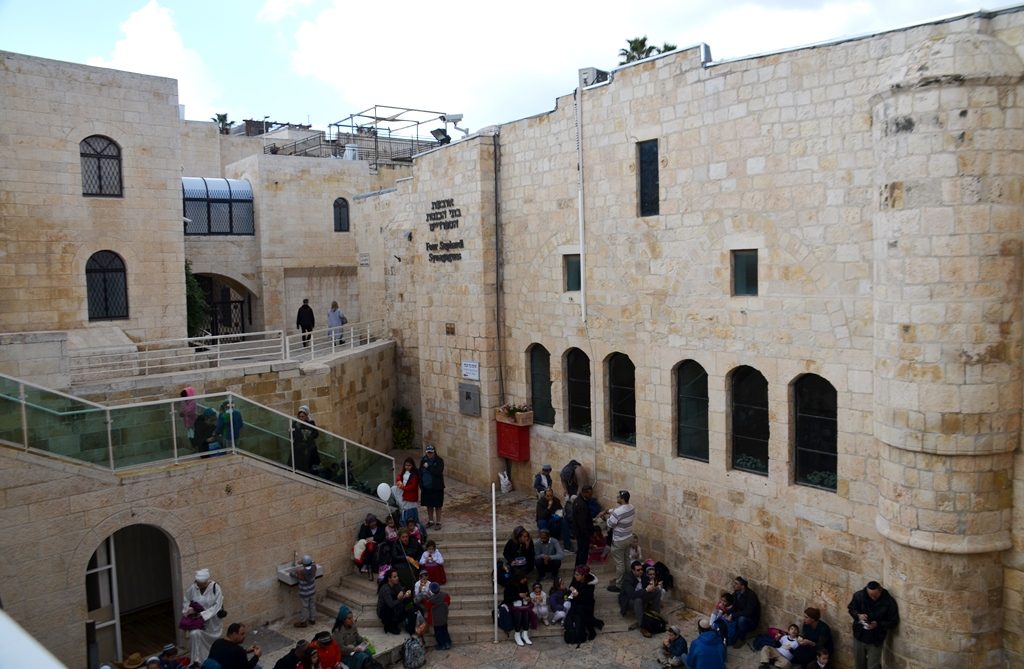 They stopped for a lunch break near the Four Sephardic Synagogues in the Jewish Quarter.

When Jordanian Legion captured and occupied the Old City in 1948, all the Jewish residents were forced out.

Then Jordan proceeded to take over all Jewish property, and destroyed or occupied all of the synagogues.

The Four Sephardic Synagogues established centuries earlier were restored after 1967, and put back to use as Jewish houses of prayer. 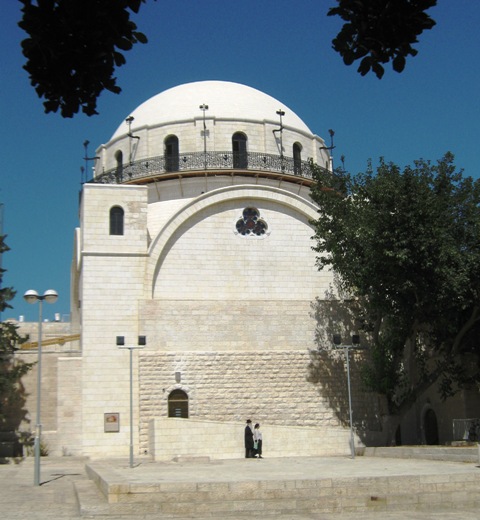 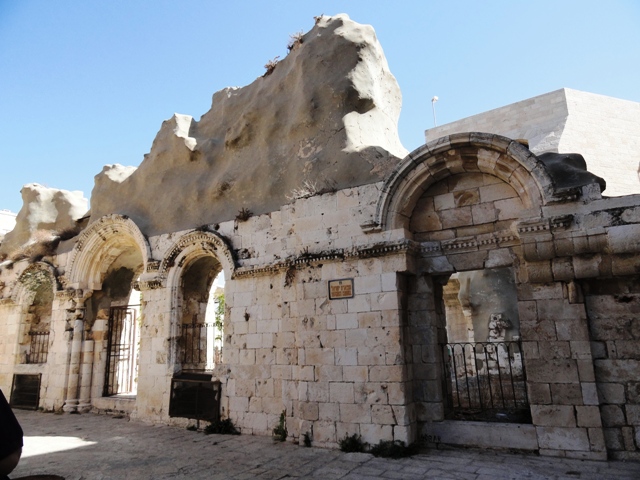 Tiferet Israel was the only remaining destroyed synagogue in the Old City of Jerusalem, as seen in this 2010 photograph. 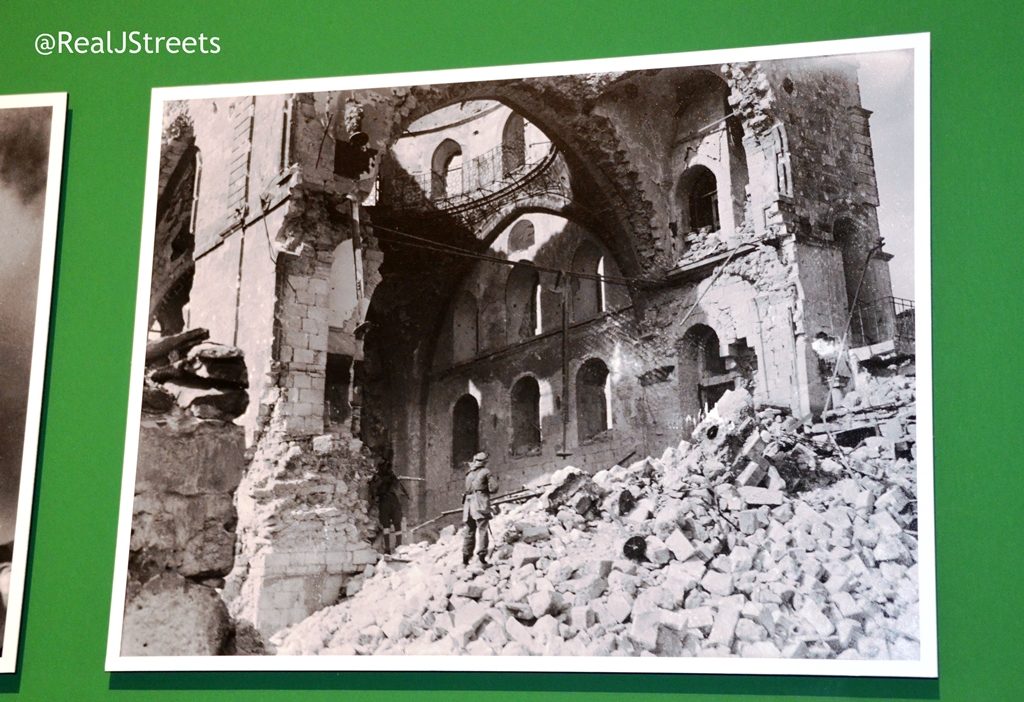 A Jordanian soldier stands on the Tiferet Israel ruins in this 1948 photo by Chalil Rissas, which was part of the Tower of David photography exhibit. 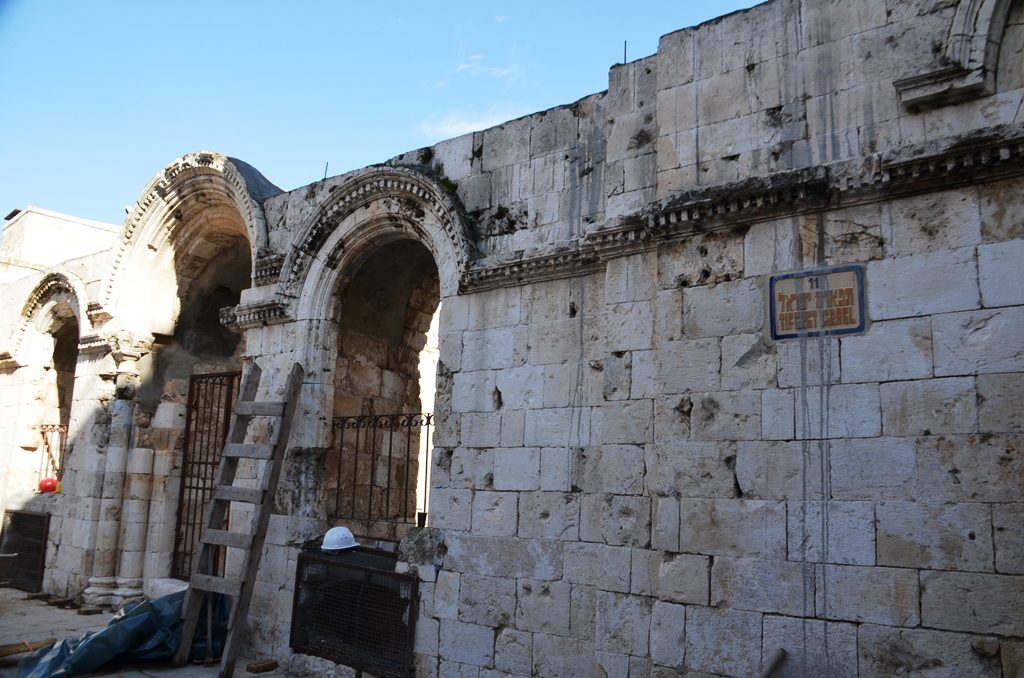 On January 1, 2019, this is how the outside wall of Tiferet Israel looked. 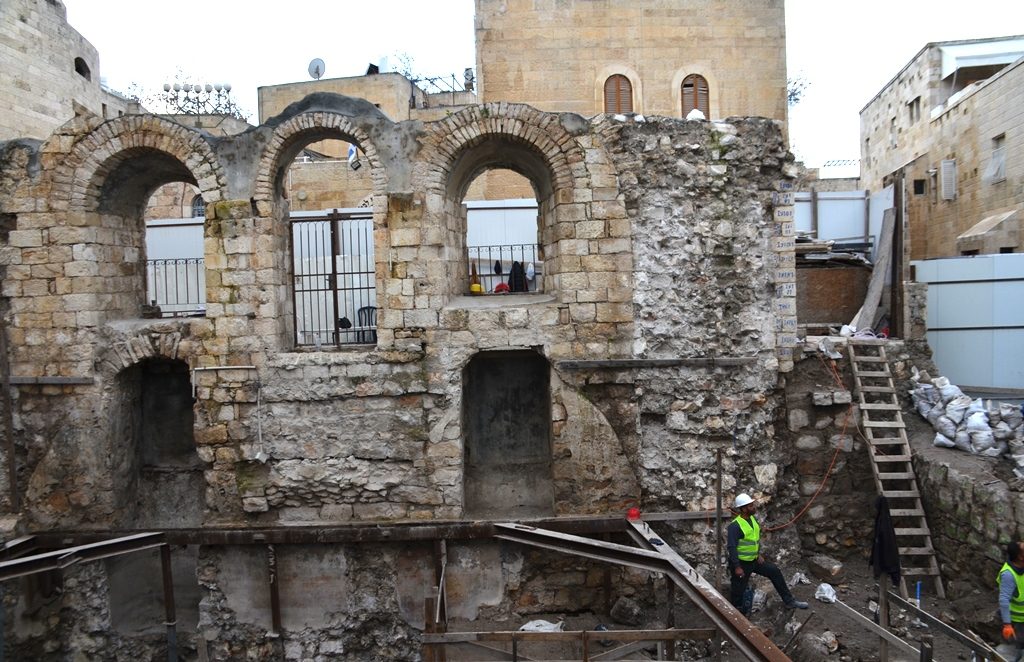 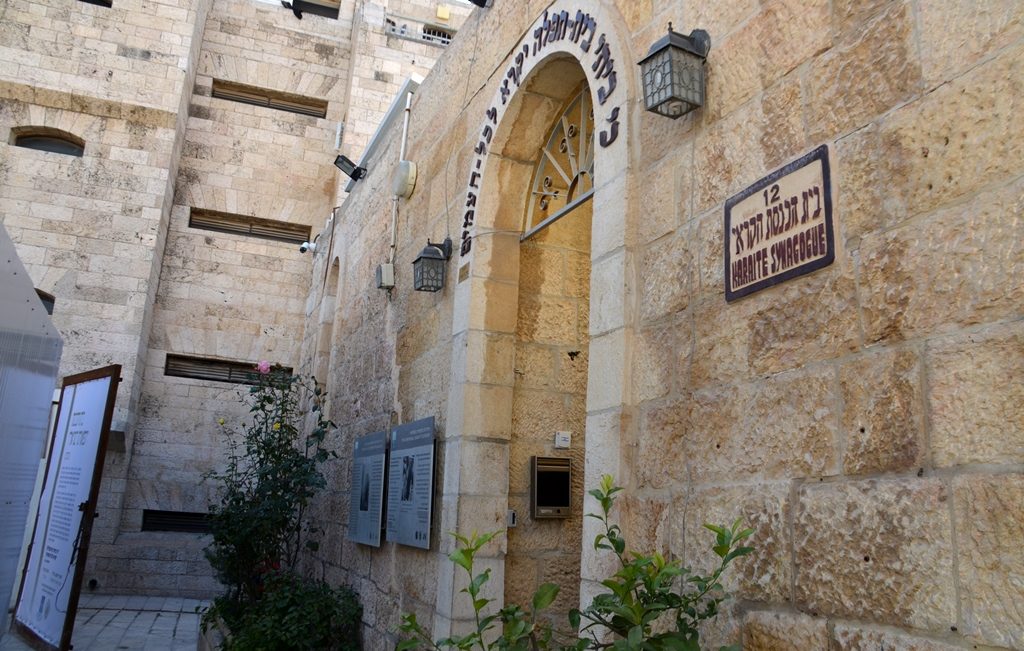 Tiferet Israel is across from the Karaite Synagogue, one of the oldest in the world. 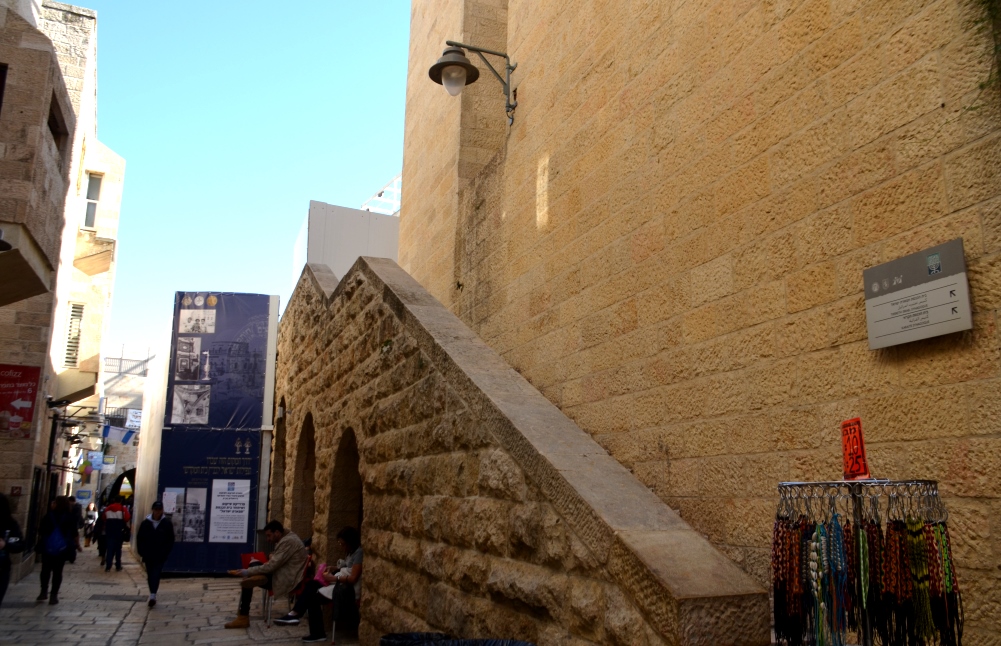 For those who have walked the streets of the Old City, Tiferet Israel will rise above the “main street” which leads to the Western Wall, the Kotel, from the Rova, the Jewish Quarter Plaza.

Or maybe easier to visualize, it is next to a better known landmark, the shwarma place. 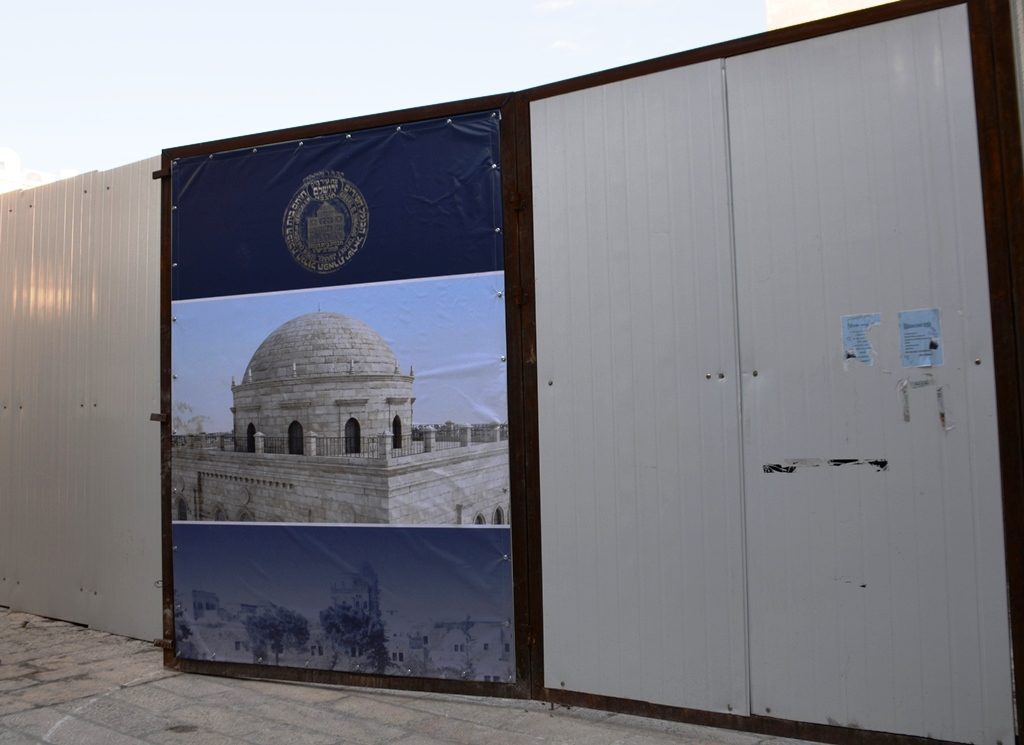 The project to rebuild and replace the synagogue destroyed on May 21, 1948 is finally underway. 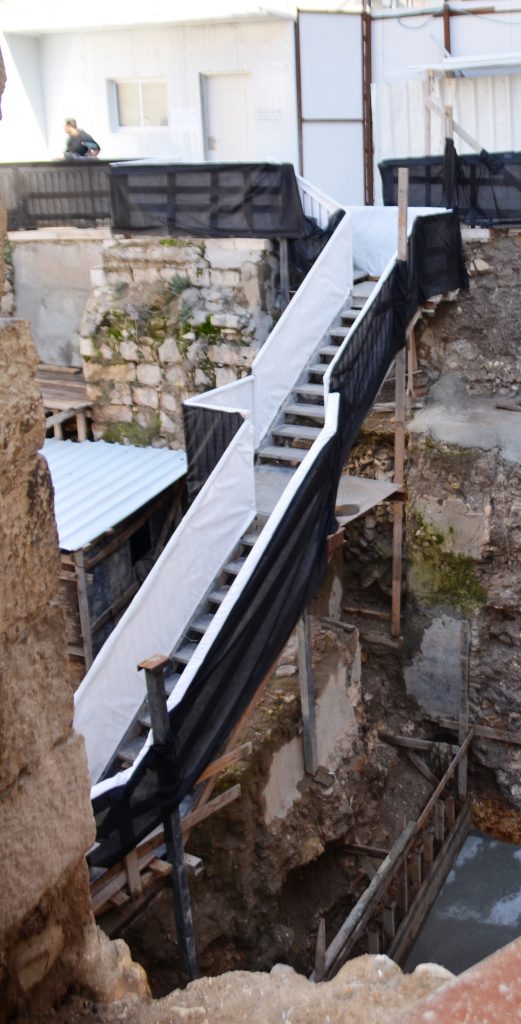 The laying of cornerstone of the new old Tiferet Israel took place on December 31, 2018.

Hopefully it will not take 10 years to complete as did the Hurva rebuilding. 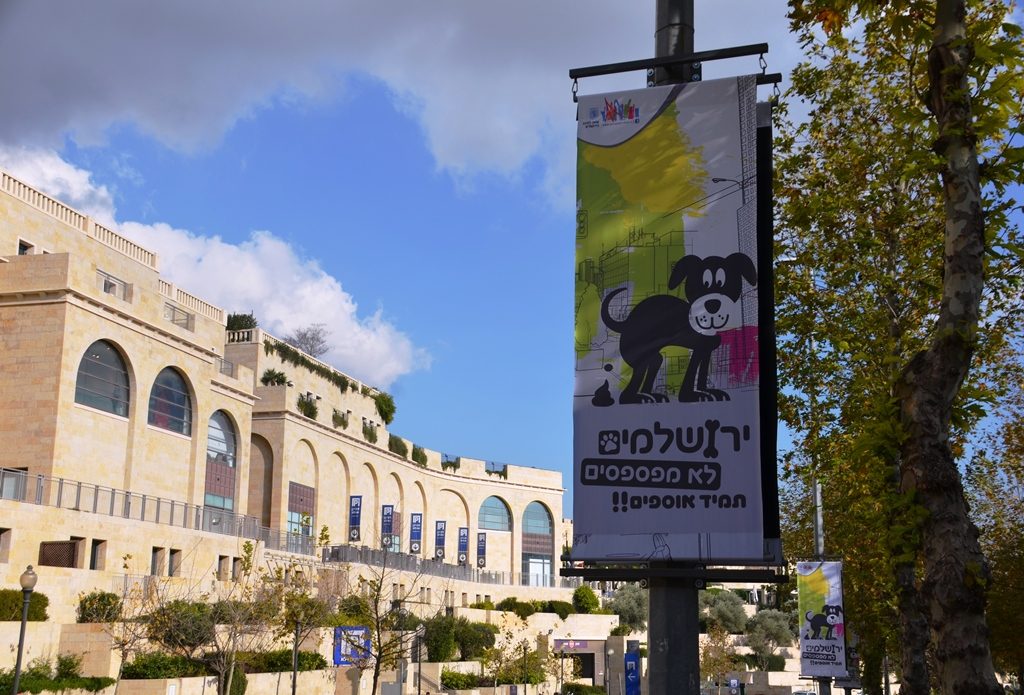 Hope you enjoyed this quick stroll through a few favorite Jerusalem, Israel streets. 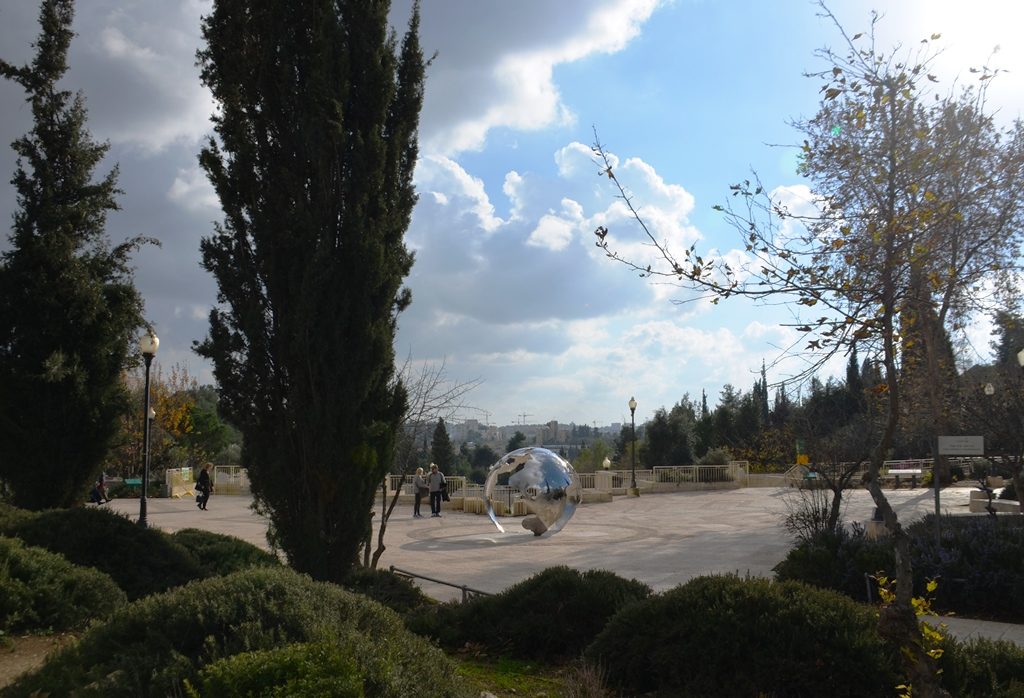 I will conclude with this bit of Teddy Park I passed on way my way home.

Most people today do not realize, all of this was either under Jordanian rule or in No Man’s Land from 1948-1967.

Jerusalem, Israel, with its ancient sites, and always with something new.

As the pretty  purple flowers bloom, we look forward to 2019.