Blue. Blue is the color of the week.

Blue is the color for good luck, and many doors and windows in Jerusalem, Israel, are painted blue.

Crayola announced it is looking to name its new special blue crayon. 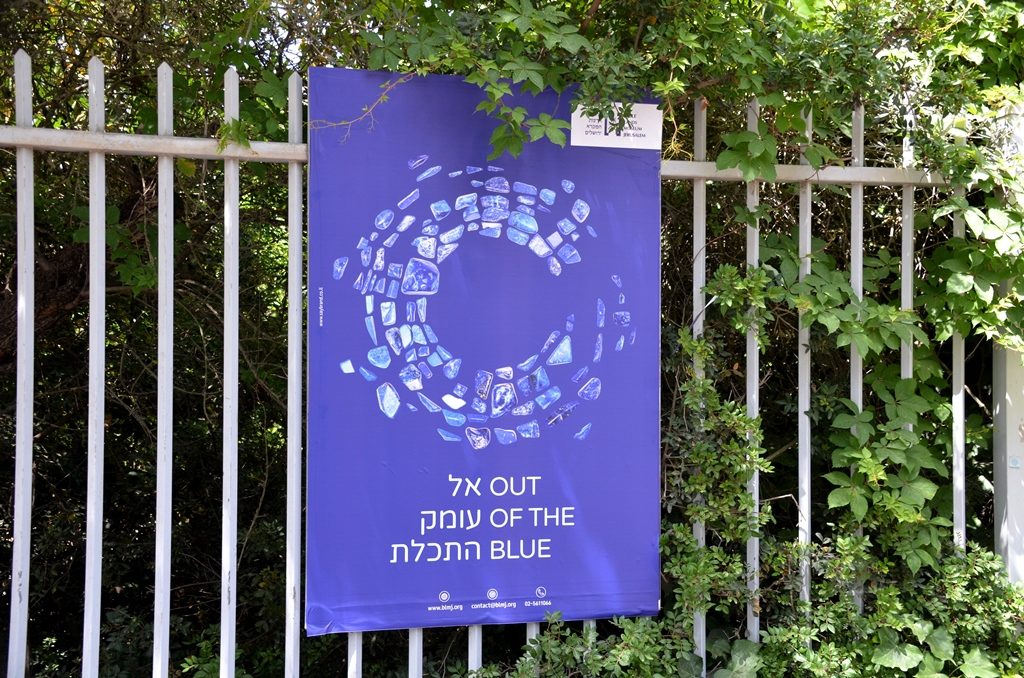 The Bible Lands Museum Jerusalem (BLMJ) opened a new exhibit called “Out of the Blue.”

The Hebrew word for blue is not mentioned in the Bible.  However, tekhelet, is mentioned in Biblical literature dozens of times.

At a special press event before the exhibit officially opened at  BLMJ, there was a demonstration of dyeing tekhelet wool. 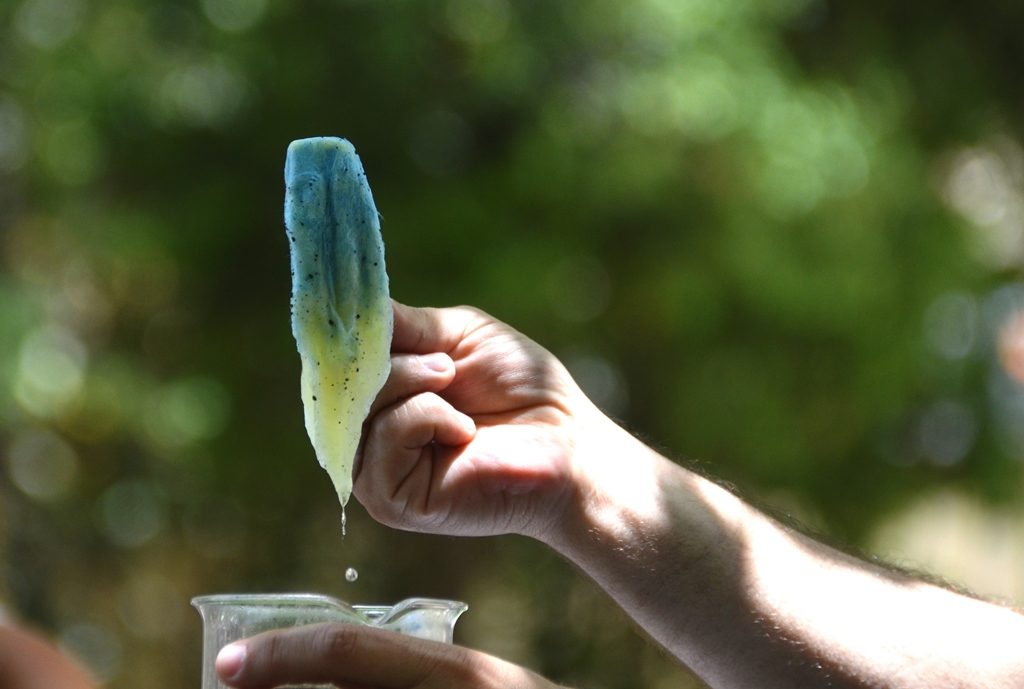 Exposure to sunlight and oxidation causes the wool which was dipped into the dye (which is made from the secretions of a gland in one particular snail, the murex trunculus)  to become tekhelet. 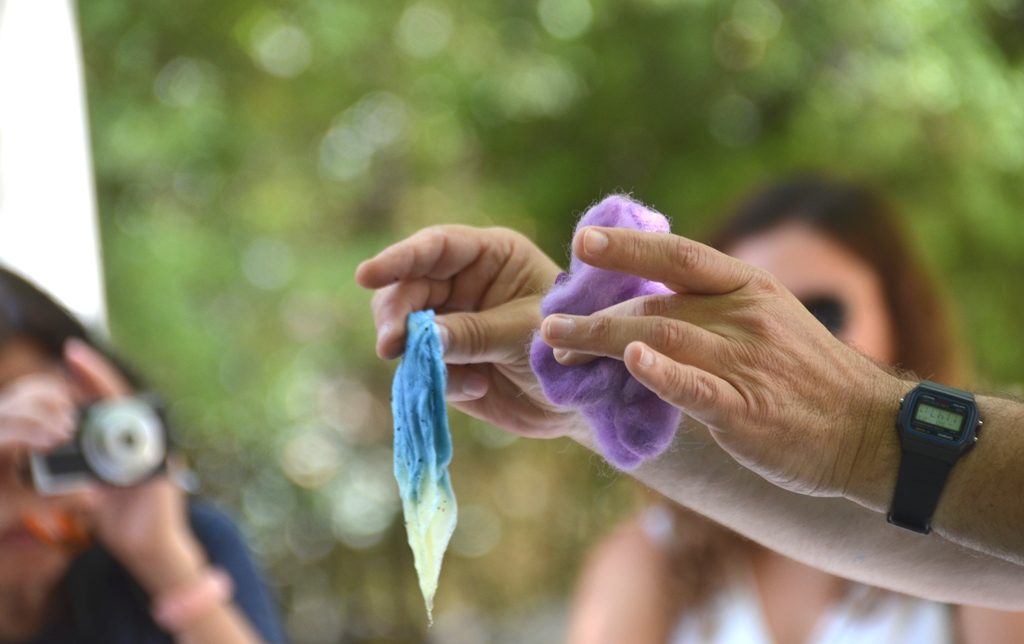 This permanent blue dye and the royal purple, are the basics of a new exhibit in honor of Israeli 70th year. A variety of ancient pieces are on display. 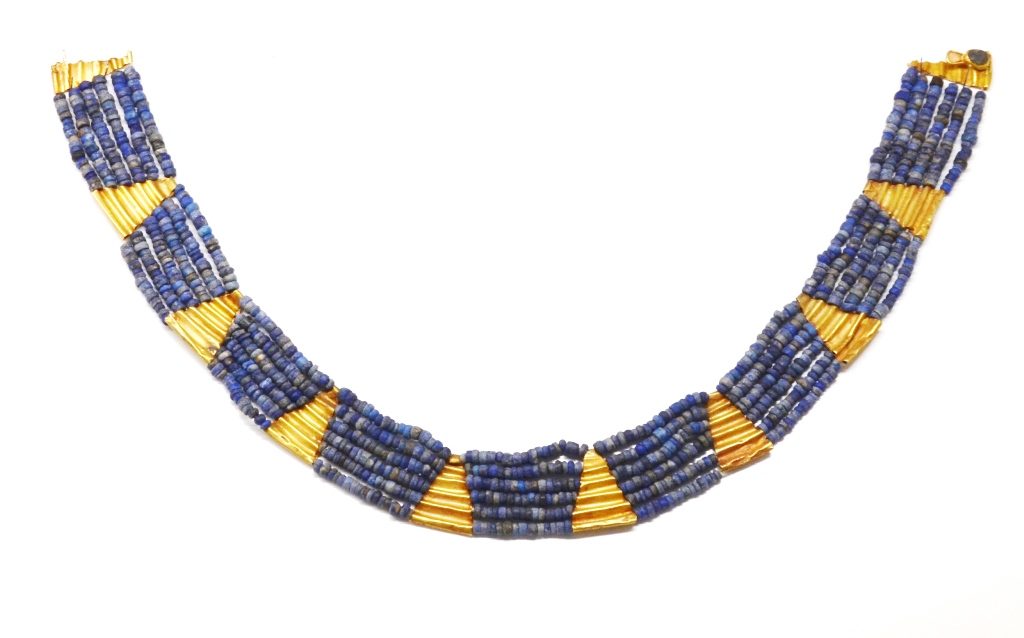 Not bad looking, this blue necklace from South Mesopotamia, dated 2700- 2600 BCE, made of gold and lapis lazuli, a  semi-precious blue stone used by ancient royalty. 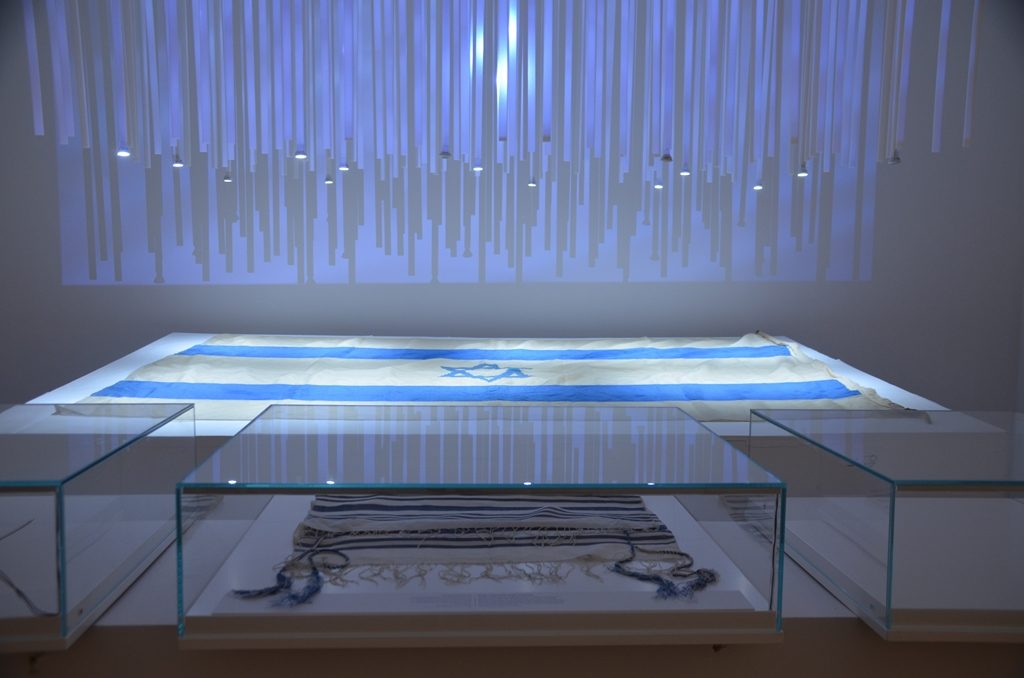 Rounding out the exhibition is the Israeli flag, modeled on the blue stripes of the talit.

Yad Vashem also opened a new exhibit this week on theme of Israel 70 years. Not blue, but showing the longing for Zion and Jerusalem in letters and memorabilia from the 1930’s of Euroepean Jews yearning to go to Palestine. 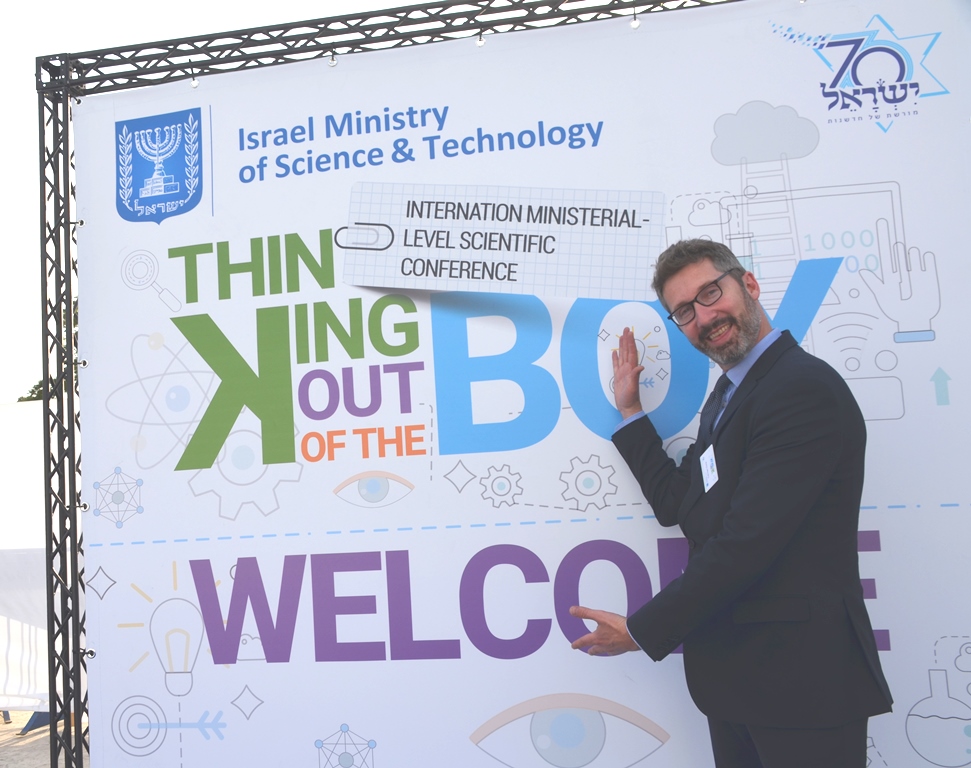 “Thinking Out of the Box” was the theme of a special Science and Technology conference held in Jerusalem. Australian Ambassador Chris Cannan and I walked in at same time. For a photo to post on Twitter I told him not to pose so stiffly. Only later did we realize, that above the big, blue word BOX he was pointing to there was a typo which ran through the printed materials. 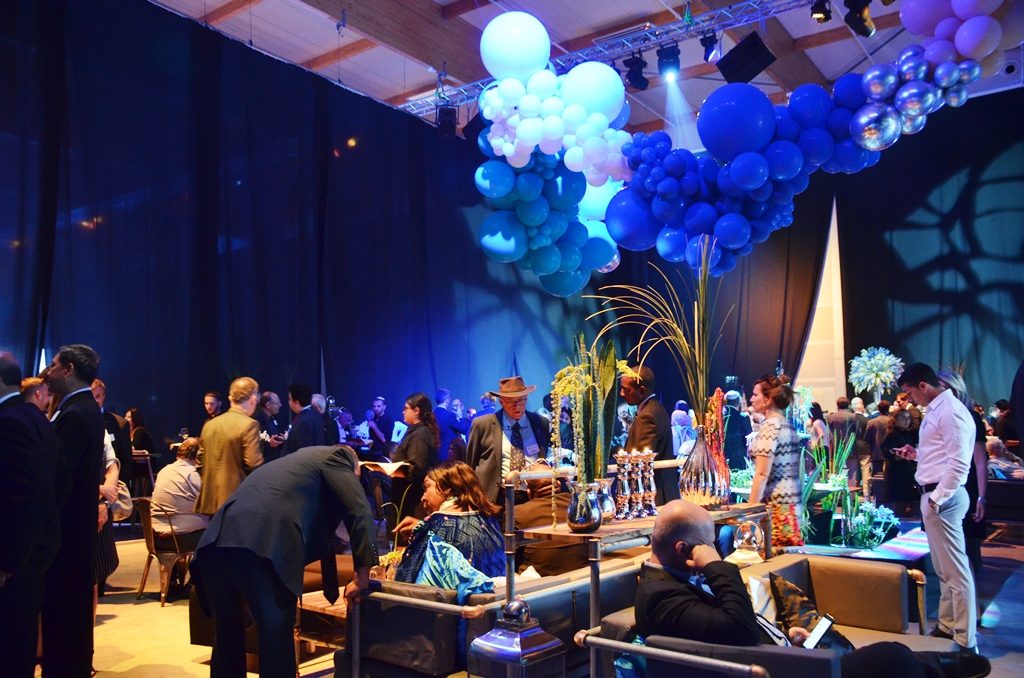 Inside the First Station hangar, once your eyes got used to the dark, was the entrance to a cocktail reception. 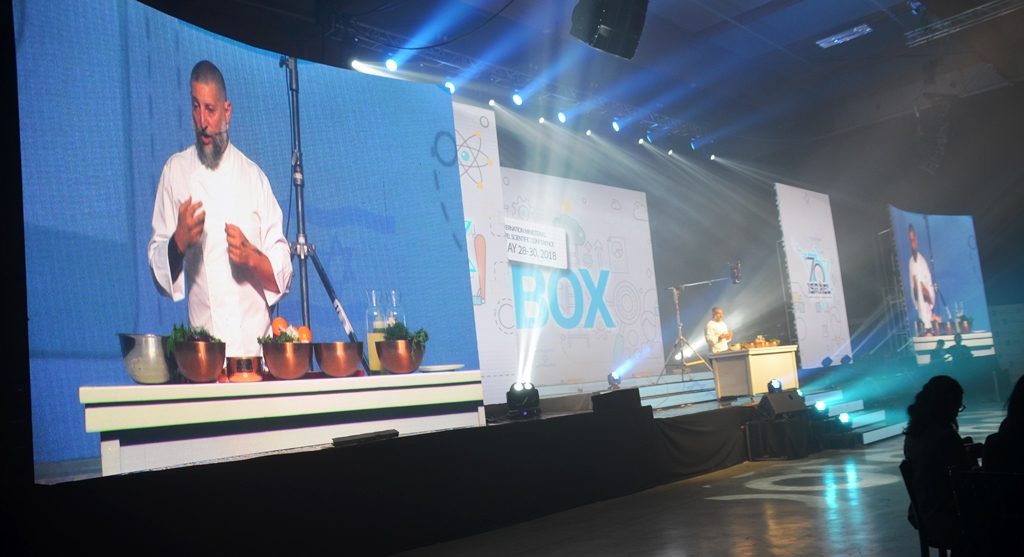 At the sit down dinner for hundreds of international guests, the first course was demonstrated and explained by its celebrity chef. No printed menus, so no typos. 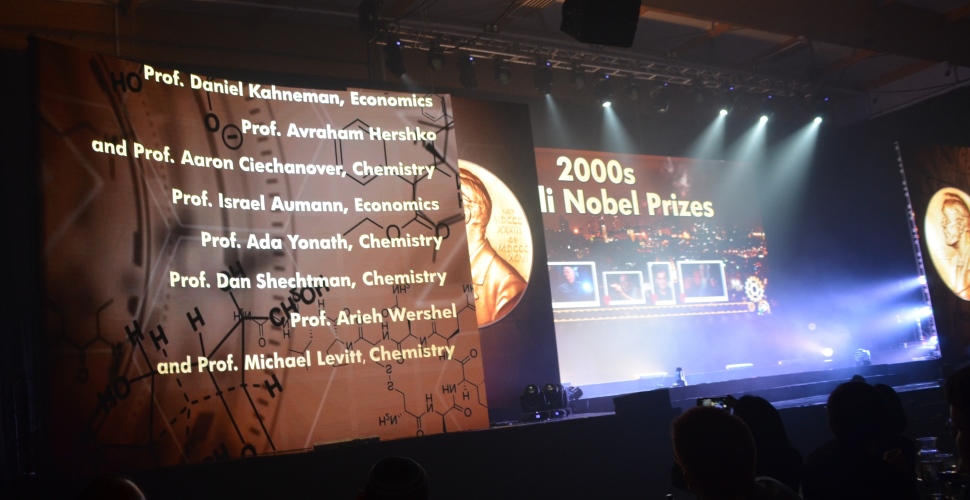 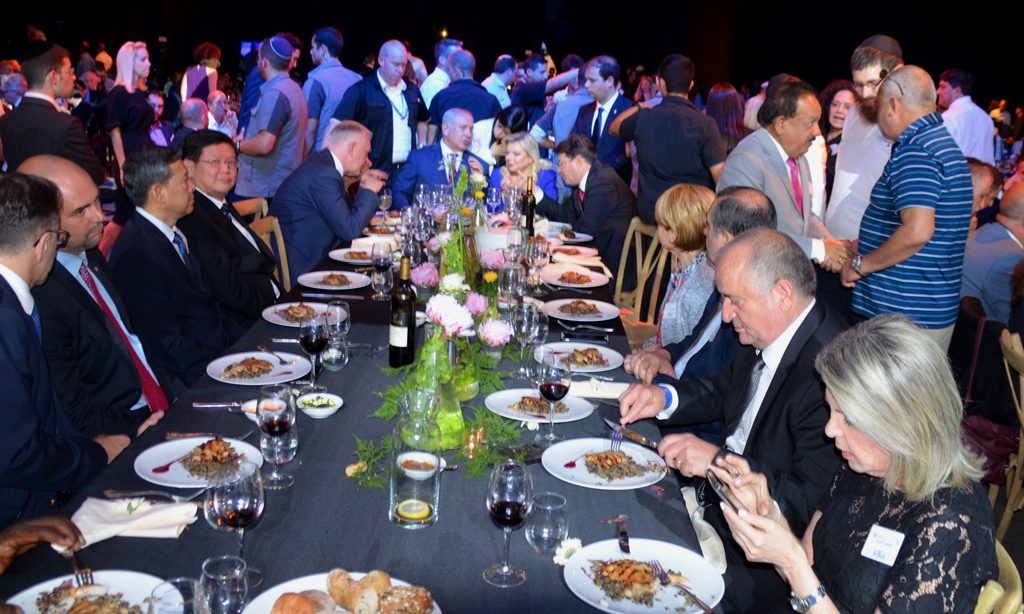 This is table #1 as dinner was served.

It was fascinating speaking with science and technology officials from Belarus, Tokyo, and India. 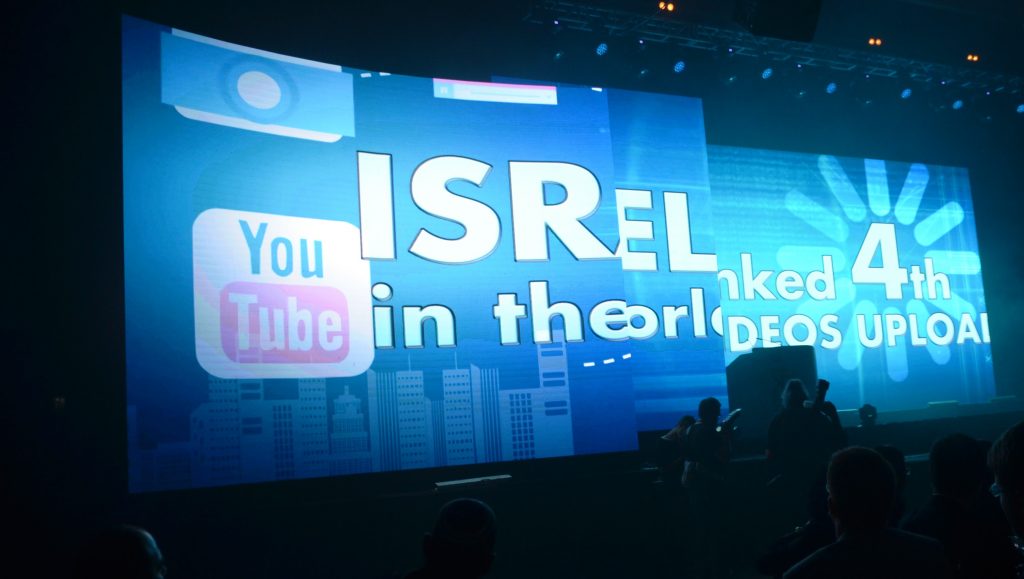 In one of the video segments, I learned that Israel is ranked number four in world in uploading of videos on to YouTube.

Ovadiah Hamama, sang Ana BeKoach, so of course, I uploaded a video to YouTube.

The “Out of the Box” conference was held at the Orient Hotel and was very exclusive.

The Wolf Prize ceremony at the Knesset, without Sir Paul McCartney, was hardly noticed, photos HERE.

But out on the Jerusalem streets the annual Israel Festival was well under way for all. 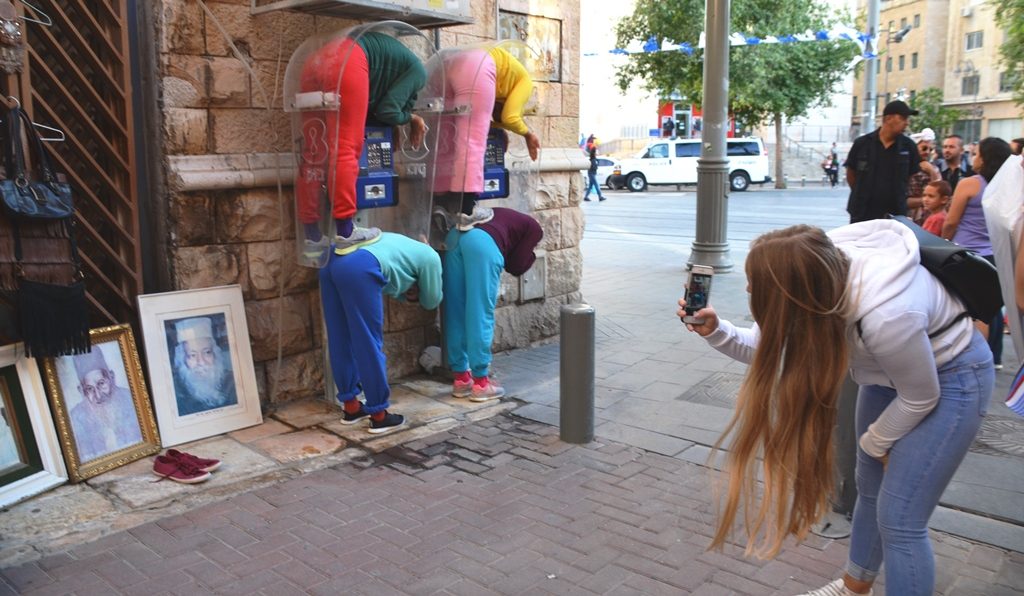 Multiple dance, music and drama performances were held in Jerusalem venues for this cultural festival which is in its 57th year.

But one dance performance by Willi Domer, “Bodies in Urban Spaces” was not only out of the box, but out on the Jerusalem streets, and in phone booths, 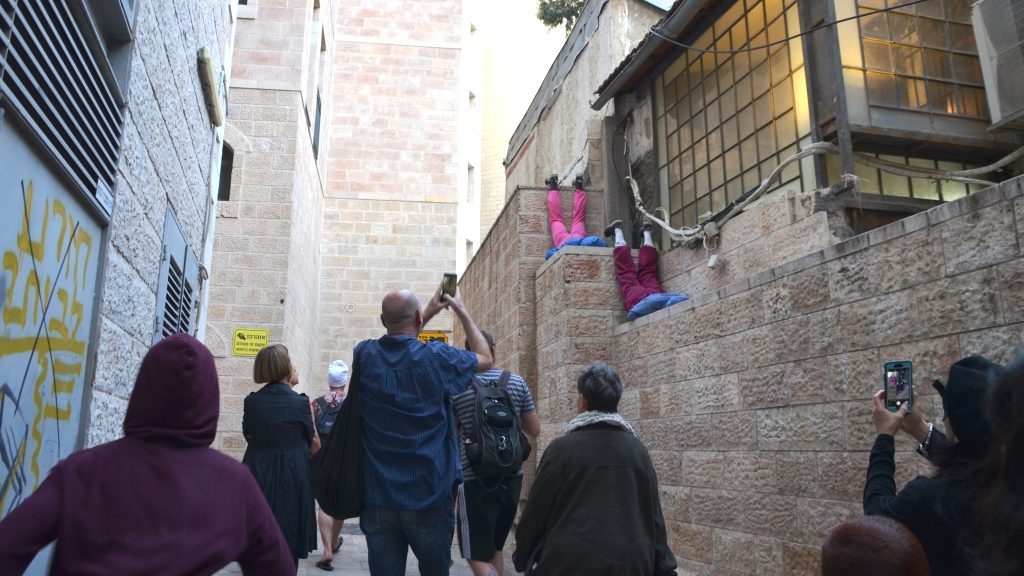 and multiple unusual spaces for photo op stops along the way from the Ticho House to the YMCA. 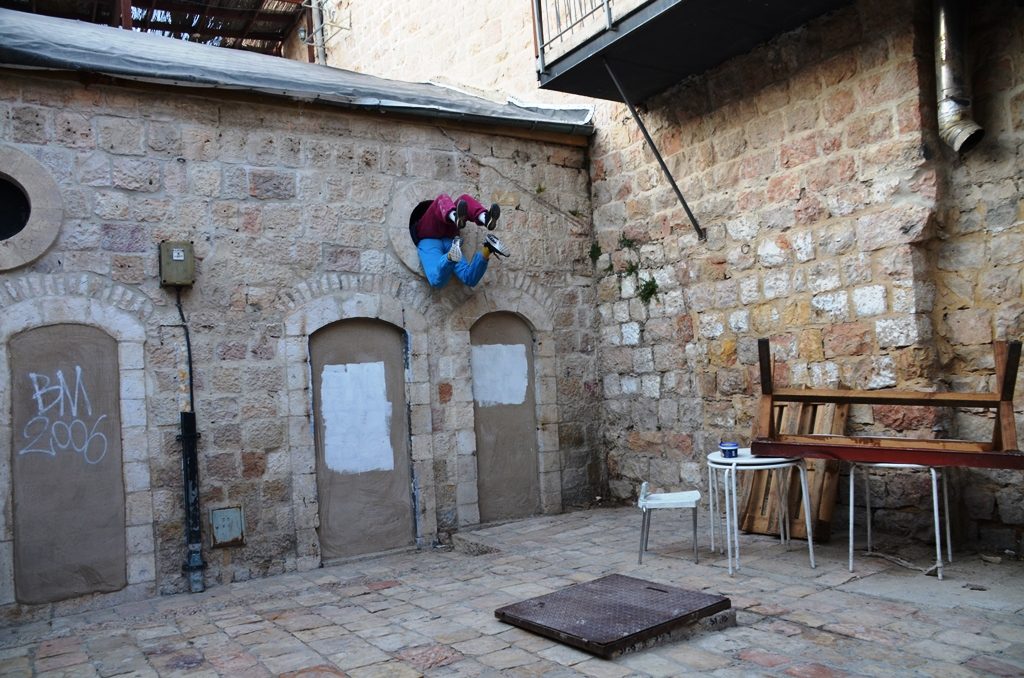 Not all appreciated the creativity and uniqueness of the young Israeli dance troupe from Tel Aviv. 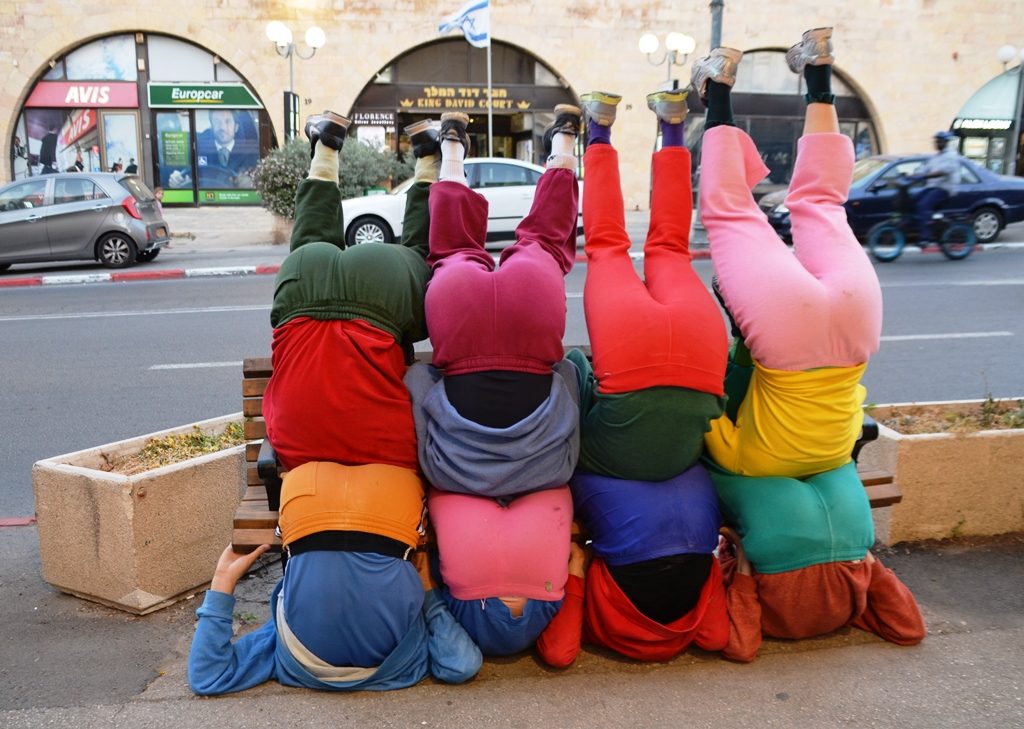 The choreographer has done performances in 100 other locations, but this was the first time in Jerusalem, Israel, on King David Street, for this pose. 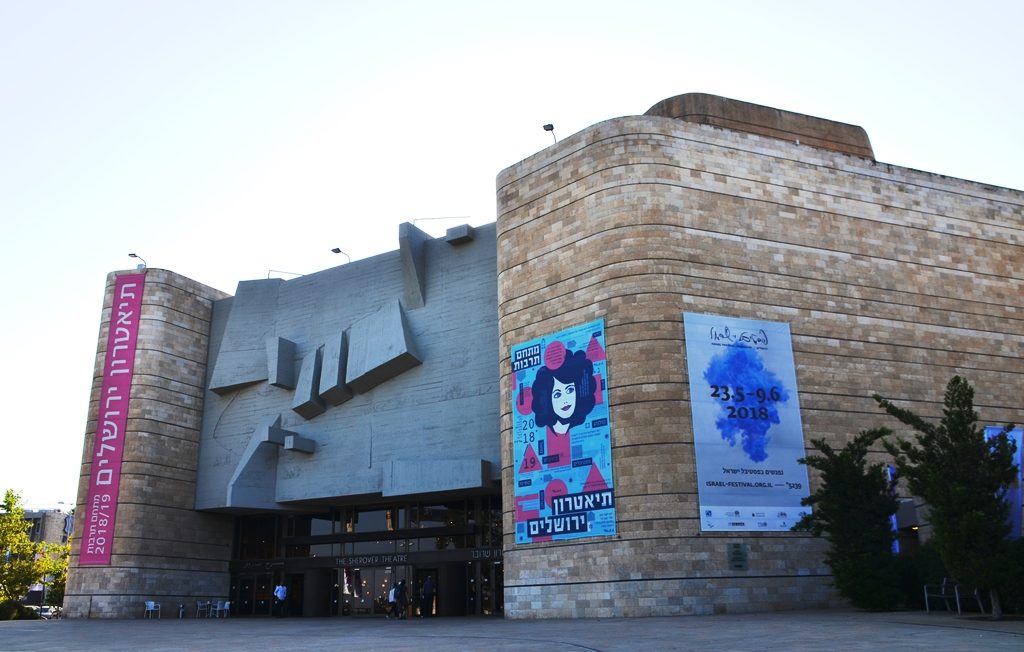 The Jerusalem Theater, with a large blue poster for the Israel Festival, held multiple music and dance events as usual, which ran from May 23 to June 9. 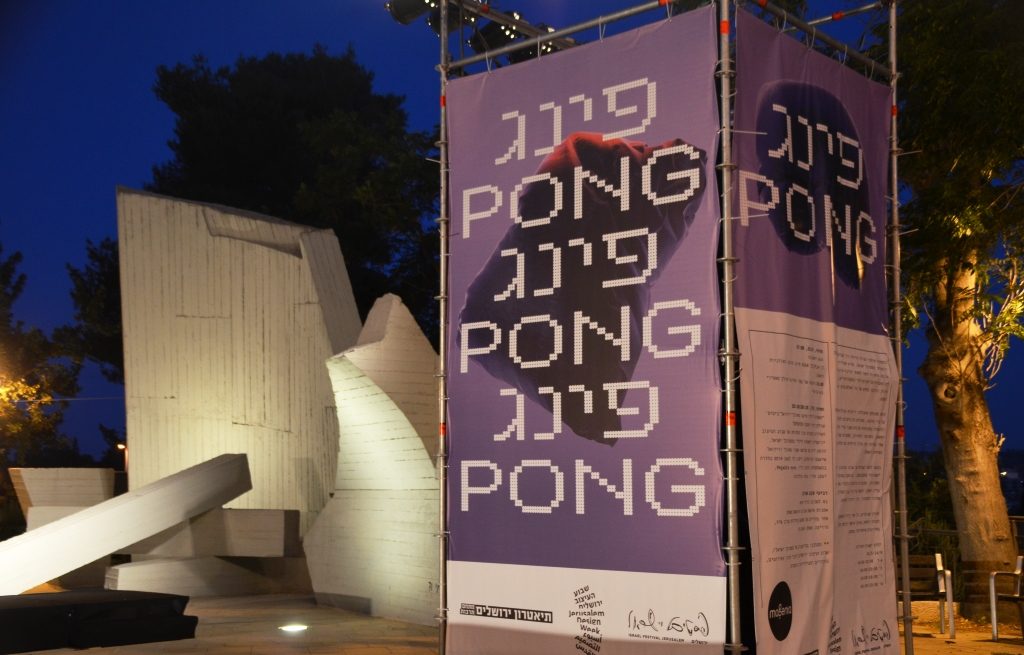 Out of the box? Ping Pong was in the plaza in front of the theater. 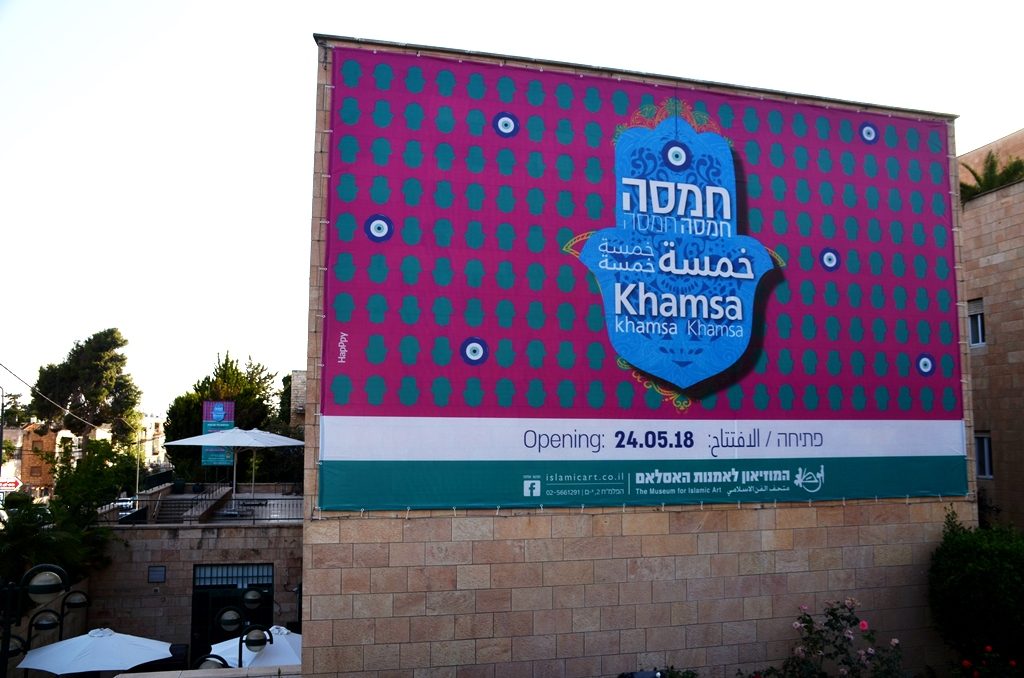 Across the street, at the Islamic Museum a new exhibit opened. A big blue Khamsa or Hamsa, was outside on the wall, while hundreds are on display inside.

For the Muslim holiday month of Ramadan at the National Library, on display were rare copies of the Qu’ran and rare Islamic treasures. 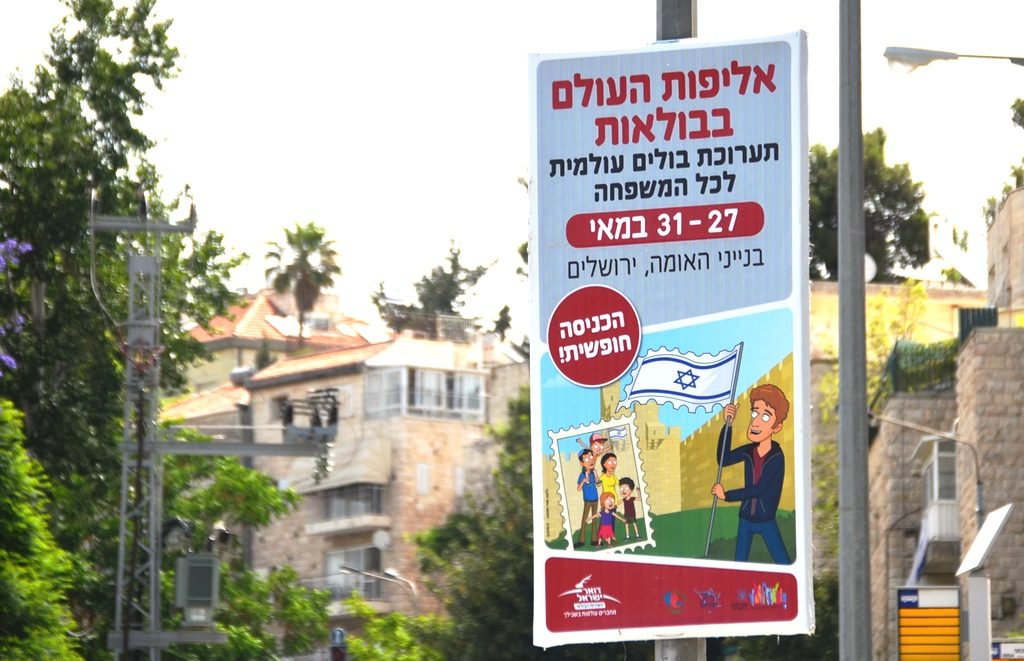 Phew. Not enough yet? There was the international stamp exhibition last week too, and admission was free. 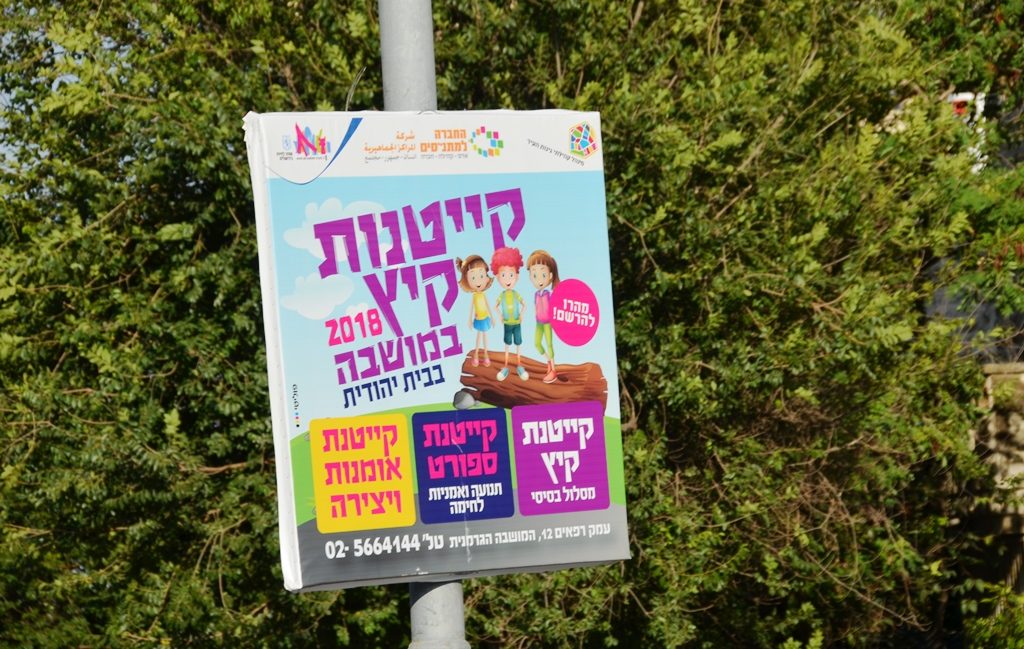 In Jerusalem, as soon as June comes around, it is time to worry about summer programs for children who will be out of school soon. 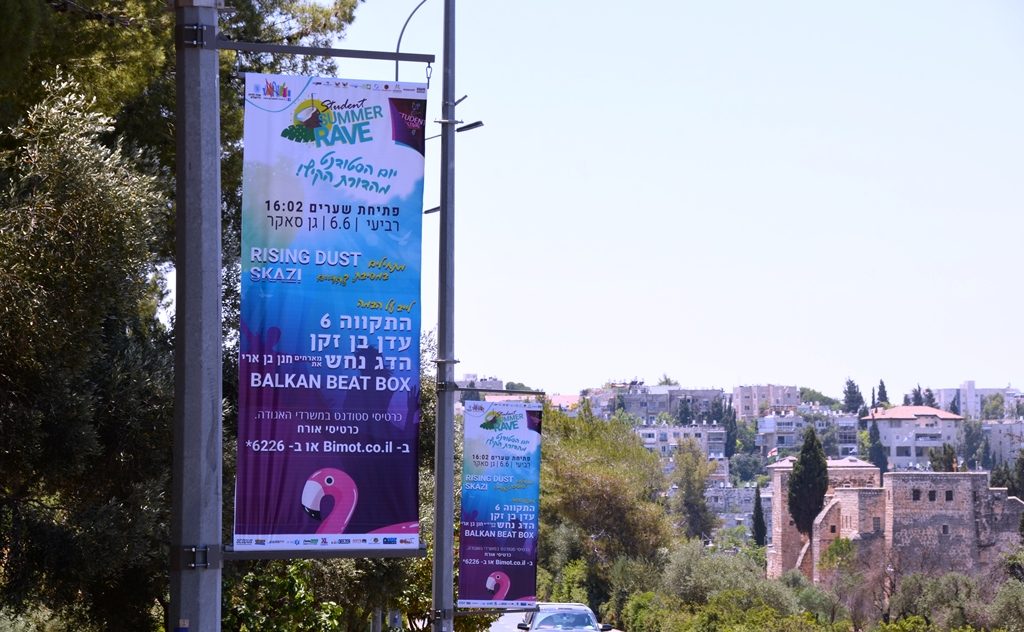 For older students, there is an all night end-of-school year Summer Rave party in Gan Sacher, Sacher Park, with a huge stage, several bands and lots of beer.  It means less sleep for many tonight. 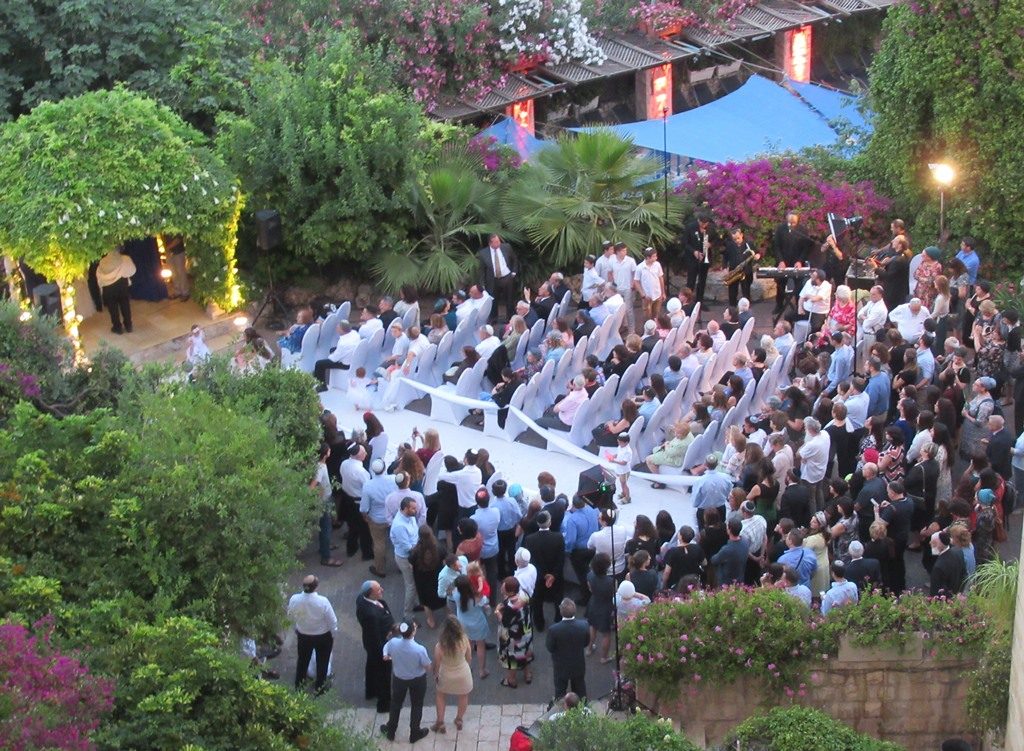 However, after a busy day there is nothing more pleasant than to attend a beautiful June wedding in Jerusalem as the sun sets. 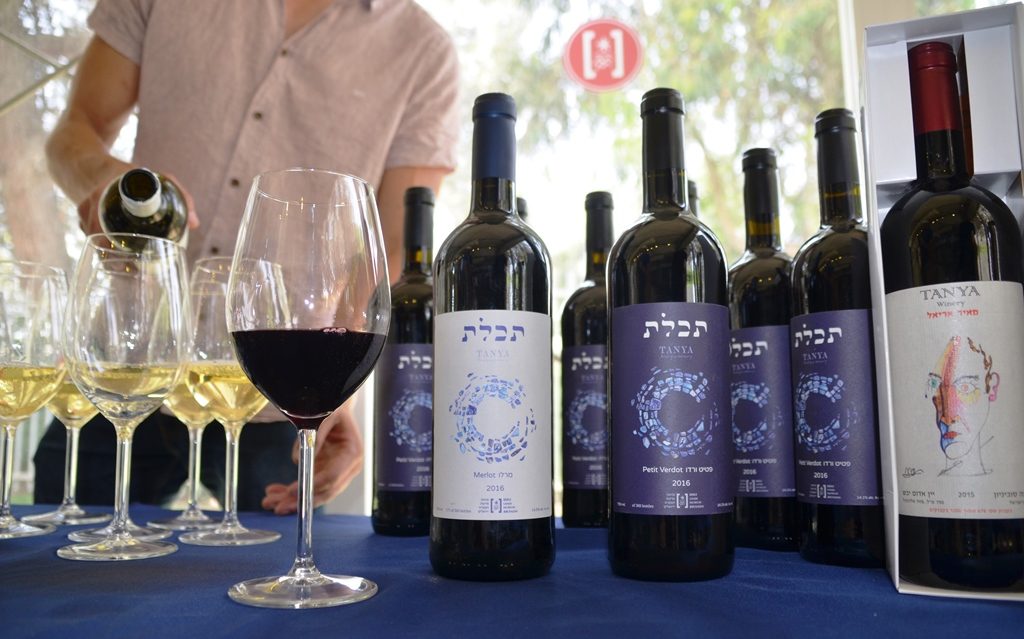 Unless it is with a bottle of special blue label wine.